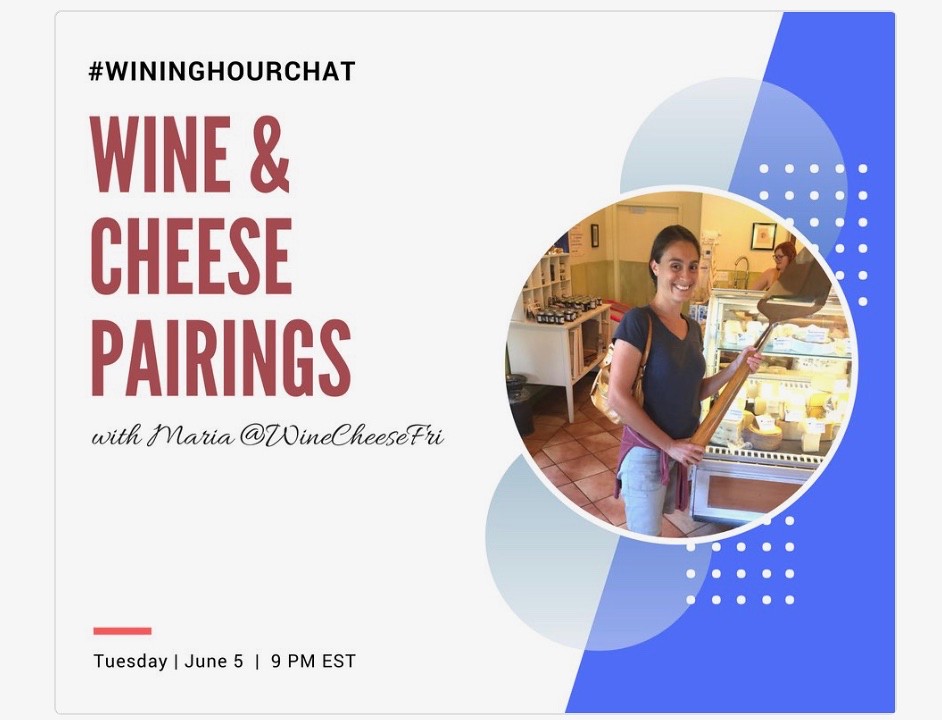 During a WiningHourChat in the beginning of the year, a suggestion was made to have a Wine and Cheese Theme on a future Tuesday night. So immediately after the chat ended, I contacted the hostesses to figure out what time of the year would be good for all of us. We decided to hold it on National Cheese Day in June. This got the ideas flowing in my mind. What would we talk about? What wines and cheeses should we taste? What would my role as guest be? The hostesses will tell you that this spurred a bunch of ideas and messages from me in the coming days.

Fast forward to May, the #WiningHourChat was fast approaching and I wanted to be ready and as prepared as possible. I went to the store to figure out which wine and cheeses I would bring to the party, when a bottle of wine that had a “Bad Ass Babe” caught my eye. Not only was the label cool but it had Cabernet Franc as one of the main grapes. It was settled, that was my wine. Next up, which cheeses? I started thinking about what cheese would pair well with this big red and I wasn’t quite sure. As preparation for the rest of the people attending the chat, I created a Pinterest Board) with many wine and cheese pairing suggestions. I figured I should use it for me too so I could see what types of cheeses might work with this wine. Armed with my list of like 6 suggestions, I headed over to Whole Foods. I was pleased to find out that there were a ton of “cheese noses” in the bin. For those of you that don’t know this term, its the tiny left over pieces that remain after the larger wedges are cut to size. Wouldn’t you know it, there were 3 that fit my suggested pairings, so I was armed and ready.

I’m a bit of a type A personality but it really only applies in terms of being prepared. So I had my wine and cheese and it was like two weeks before the big show. A week or 2 before this shopping spree, I was also beginning to gather information on cheese to share that night. I had come up with a handful of questions and sent them over to our hostesses to be pre-approved. Once I got their ok, I meticulously answered all of them and entered them into Twitter to make sure I had the correct number of characters. (Those of you that use Twitter, know what I’m talking about here). There’s certainly a technique to getting that to line up.

So what about the wine and cheese you ask? Well, Neil and I paired them early so I’d be ready with photos and descriptions before the chat. This also helped for advertising the chat. The wine had aromas of red berry, spice, earth and red licorice. It was smooth and dry with a spicy finish. There were big fruit and earthy flavors that made it so drinkable! All these aromas and flavors lasted throughout the week of enjoying this wine.

The cheeses were all kind of ringers, because none of them were super new to us…We began with the Borough Market Cheddar from the UK. We have certainly had cheddar cheese before but this type of cheddar was new for us. It had a great set of aromas including salt, nuts, herbs, veggies, butter and charcoal. The texture was crunchy and dry with flavors of salt, milk, butter and mustard. Neither one of us could believe that it tasted like mustard! Up next we tasted the Cave Aged Gruyere from Switzerland, a cheese we’ve had a few times. This was funky with smoke, salt and sour aromas. The flavor was definitely distinct, I called it garlic mushrooms. It was good, flavorful and the rind added to the mushroom flavor. Try this smooth cheese with a lingering funk! Our final cheese of the three was Pyrenees Brebis, a sheep cheese by Herve Mons in France. We first tasted this cheese at a Cheese Tasting back in SF, man do I miss having access to Cheese Plus! Neil could smell the sheep milk funk in the cheese. It was soft, smooth and oily. The flavors were milky, hay, and a mild funk. It was a pretty delicate sheep’s cheese that I might have guessed was made from cow’s milk. The rind on this cheese is edible too and contributed a vegetable flavor to the cheese. We give all these cheeses a YUM rating but Maria was pleasantly surprised by the Borough Market Cheddar with big notes of mustard.

As you know, we are all about wine and cheese pairing, so of course we paired all of these cheeses with the Intrinsic wine! According to Maria the wine made both the cheddar and gruyere seem drier. Neil felt the cheddar began to taste like yeast or a sweet beer flavor and the gruyere got a lot creamier. The pairing of wine and Pyrenees Brebis was our favorite due to the way the cheese changed. Maria noticed the cheese to get stickier and it lost the funk. Neil said the cheese got more complex and he identified both hay and grass flavors.

We did notice the wine to change a bit from the pairings too. The cheddar cheese turned the wine to a tart cherry for Neil and Maria picked up a lighter wine texture but a very full berry flavor. The funk of the gruyere got transferred to the wine during Maria’s pairing. Neil thought the wine gained a big berry flavor. And for the final pairing with sheep’s cheese, the wine took on a big spice for Neil and a black berry flavor for Maria.

And yes the chat was still a week away. We even made our video intro a few days ahead too so I didn’t have that “I’m so nervous, I’m going to throw up” look on my face.

The night before we came up with our game plan. I knew that I wanted Neil by my side for this because twitter chats can get so hectic. Another way I prepared was to find out if the hostesses knew what time each question would be released. You never know what’s going to happen on twitter! Sometimes the questions never show up on your feed, despite the fact that they were released. So I had Neil there and the times, with appropriate alarms set on my phone. Yup, type A! I was as prepared as I could be!

We still had a bit of the wine left and some cheese, set up between us. The room smelled like wine and cheese, that helped to calm me down a bit. The clock struck 9pm and we were off. Both Neil and I were frantically reading through the twitter feed while I glanced at my notifications. After about 5 minutes, I decided there was no way I could keep up with the notifications. The dynamic worked out really well because Neil would catch the audiences questions before I would and we’d discuss out loud and then he’d answer. Meanwhile I was entering our answers to each question and attempting to keep one eye on the chat as it raced past us. Probably around 9:20pm I was sweating out of control but we persevered. Neil and I both retweeted wine and cheese pairings as an attempt to capture all our info. And with a blink of an eye it was 10pm and the chat was wrapping up.

Curious about what we discussed during the chat? Here’s the list of Q&A:

Q1a How and when did you start pairing wines and cheeses?
A1a I’ve always enjoyed eating cheese but it wasn’t until we started the blog back in ’13 that I found out how cool it was to pair wine & cheese. We got started with pairing by using a lot of the Wine and Cheese Charts.

Q1b What is it about wine and cheese that attracts you?
A1b Well besides the fact that they are both delicious, it’s the reactions that come from the pairings. We’ve found big flavors appear, new flavors come out of left field & sometimes there’s an interesting reaction in our mouth.

Q2a Do you have a favorite wine and cheese pairing?
A2a We’ve done so many Wine&Cheese pairings! Over 100 according to our site. ? Some favorites: Gavi & Morbier, Pandemonium White Blend & Double Cream Brie, Boccalino & Pecorino Ginepro, Pinot Noir & Jasper Hill Harbison

Q2b Which wine and cheese are you pairing tonight? #WIYG?
A2b We are pairing a WA blend with “Bad Ass Babe” label. And there’s Cab Franc in it! Since we’re celebrating #NationalCheeseDay, we tasted 3 ?s: Cheddar, Gruyere & Pyrenees Brebis #Overachievers Watch for Friday’s entry about this.

Q3. Maria @winecheesefri, can you tell us a few of your favorite cheese facts?

CheeseFact 1: A little about ? cheese. Goat cheese is white because when goats digest the chlorophyll in the grass, all the color is removed. Milk production of goats, unlike cow’s, is only from mid-March through October.

CheeseFact 2: Cheese was a peasant food at first. Rich people could kill the cow for the meat but you could get more food out of a cow if you milked it! Cheese was used as a way to preserve the milk before it went bad.

CheeseFact 3: Blue cheese can be made from any type of milk! It becomes a “blue cheese” once it’s been injected with strains of pennicillum mold and then “needled”. Want to learn more about blues? http://avinawinetools.com/wine-and-blue-cheese/

Q3b How do you choose which wines and cheeses to pair on WineAndCheeseFriday?
A3 Once we got a little experience, we knew to pair funk & funk, butter & butter, sweet wine & blue cheese, other times both are from the same location/geography, but many times both are random.

Q4a When pairing wine and cheese, do you notice any new flavors as a result? What is your experience @winecheesefri?
A4a That’s our favorite part of wine and cheese pairings! The Pandemonium White Blend & Double Cream Brie (mentioned above) had a new flavor of nuts appear during the pairing! https://wineandcheesefriday.com/pandemonium-white-blend-and-double-cream-brie/

A4b Our favorite pairing from tonights ?? was with the Pyrenees Brebis. Maria noticed the cheese to get stickier and it lost the funk. Neil said the cheese got more complex and he identified both hay and grass flavors.

Q5. #WiningHourChat Do you have a suggestion for a wine and cheese pairing that Maria should feature on WineAndCheeseFriday?

What an intense hour of chatting about Wine And Cheese! We had a great time and it seemed like everyone else did too. I had such a collection of notifications by the end of the night, and the next day, and the day after that. Think we might finally be reaching the end of them now. We also took the time to go back through the entire chat to make sure we saw everything that flew at warped speed past us that night. Thanks to everyone who was able to attend. We appreciate all your support!

If you have a twitter account and want to see even more details of this chat look for #WiningHourChat. And to those of you wondering, yeah, we’ll probably do another chat with wine and cheese again soon. 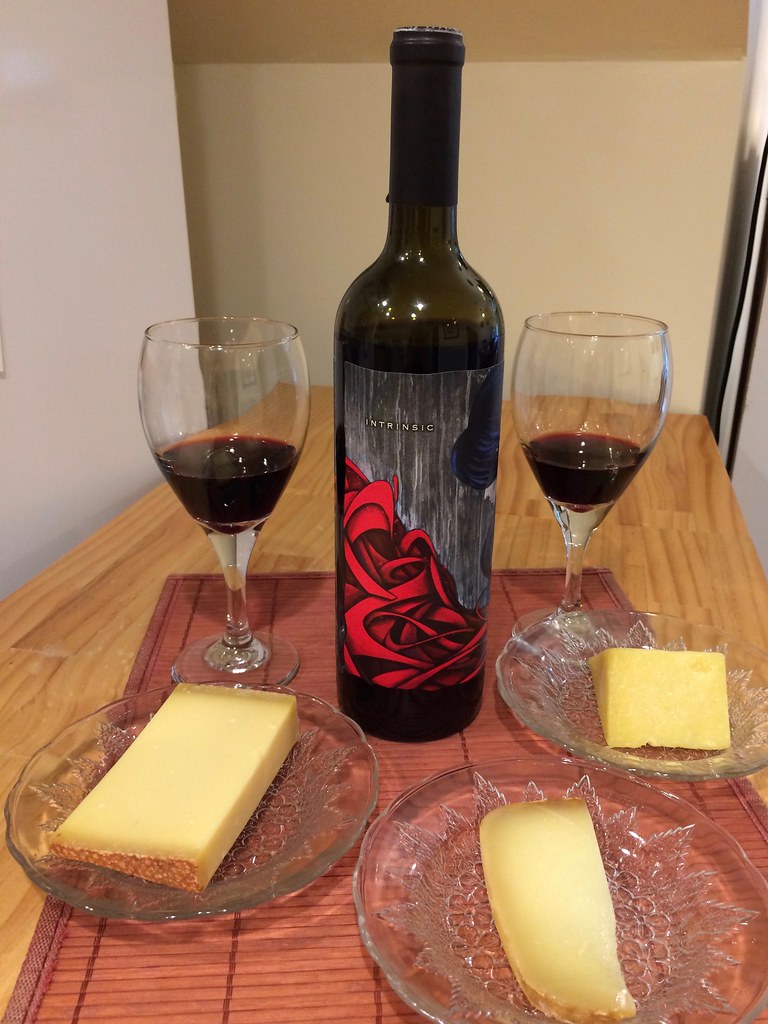