A More Tropical Version of Wine and Cheese 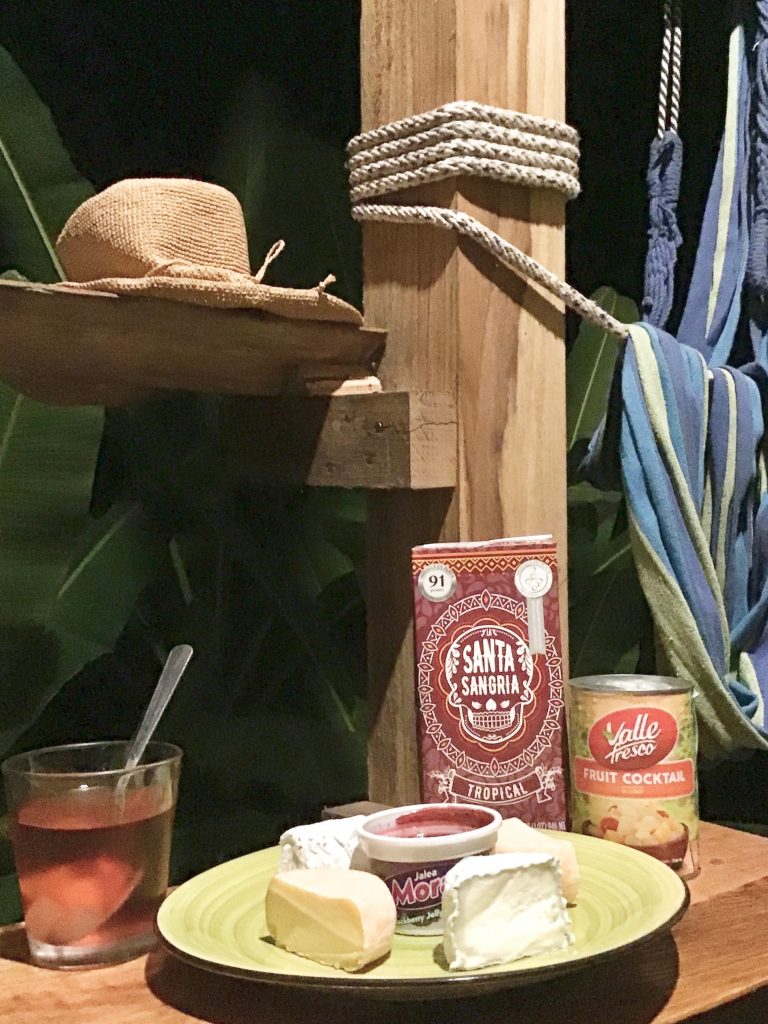 When we arrived in Costa Rica, we spent our first week at the beach in Puerto Viejo. The thing about the beach in Costa Rica, or anywhere, is that it’s hot! A little tricky for me to enjoy a nice glass of wine when I’m sweating so I usually seek other options. A great alternative was the box of Sangria that we found with such a fun label. Then as we continued to look in the grocery store, we came across a new brand of Costa Rican cheese. It was settled, we could still do some wine and cheese in more of a tropical way!

The Sangria by Santa Sangria was labeled as “tropical”, not quite sure what that meant but we figured we’d give it a go. In order to keep things easy while we were enjoying our beach time, we bought a can of fruit cocktail to add to the Sangria. Never tried this before but didn’t feel like chopping up some fruit without cutting boards, etc. 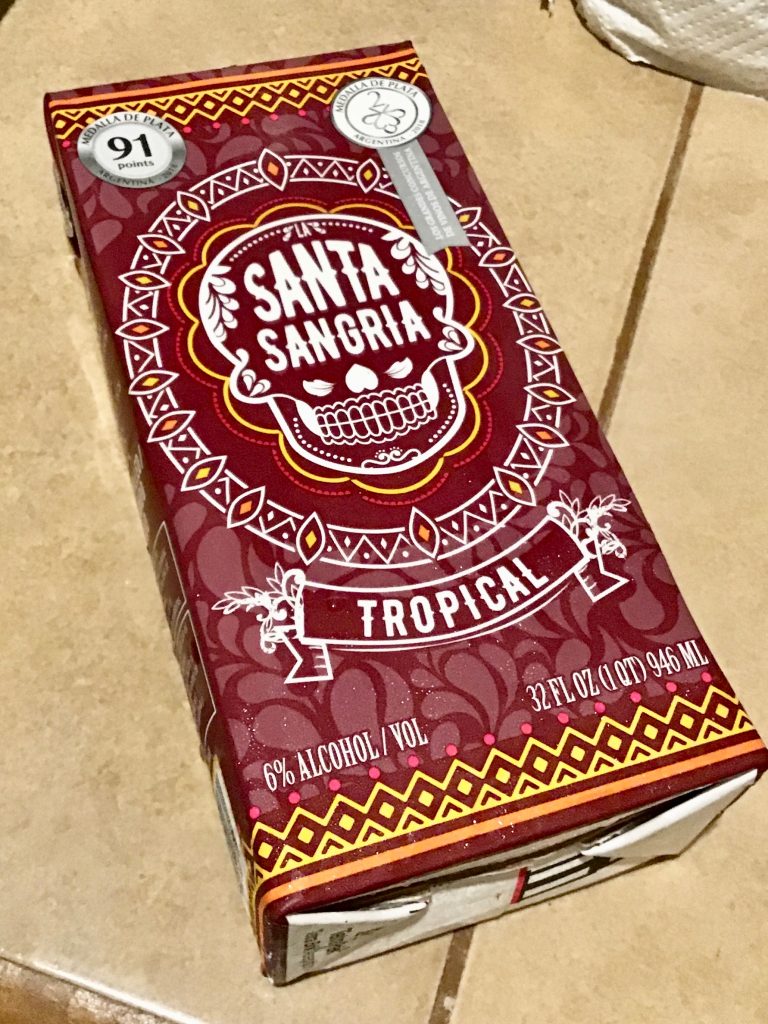 As I looked for aromas in the Sangria, I thought it smelled like fruit punch. From the color, Neil thought it was more of a rosé Sangria. The texture was light and not as sweet as I’d expect. It did remind me of Hawaiian Punch, though. Neil described the Sangria as fruity with hints of pineapple. He said it was a good thing we didn’t add the syrup from the fruit cocktail because it would have become too sweet. 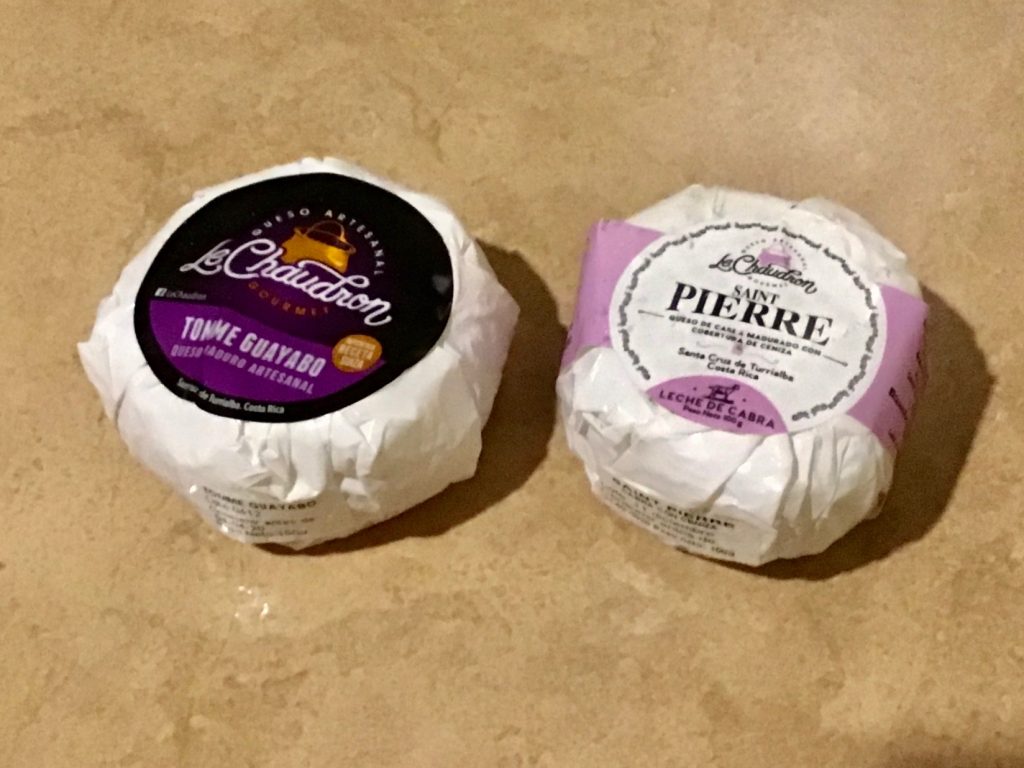 The new brand of cheese was Le Chaudron, made here in Costa Rica (near the Turrialba Volcano). We chose two cheeses because, why not. The first one was a goat cheese called Saint Pierre. I thought it smelled like salty goats milk. Neil was able to identify a goaty, cave funk in the aromas. He found it to have the “texture of a cloud” which seemed to me that it was starting to ripen but still had the texture of a chèvre too. I thought it was kind of light but Neil said it has a strong flavor and that it was lovely! I do agree that it was lovely. It seemed like such a solid cheese and that it could have been from a more well-known cheese region. 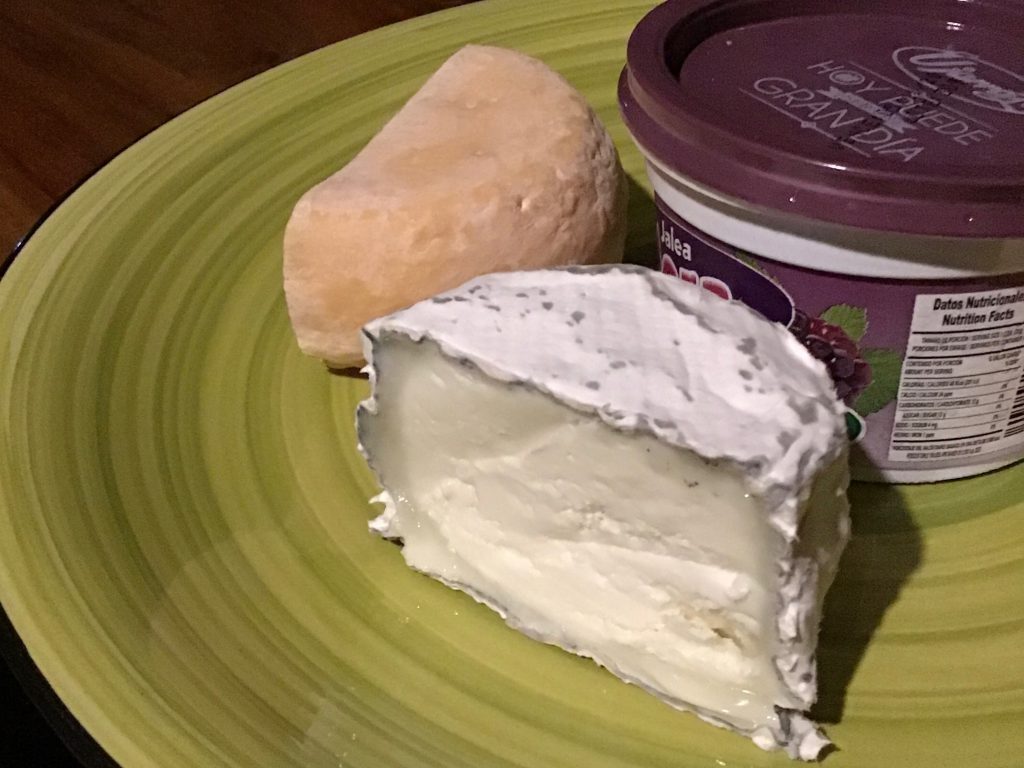 During our pairing of Santa Sangria and Saint Pierre, I found the wine to stay the same and the cheese got maybe a little more tart. Neil thought the goat funk came out more from the cheese but that the sangria was a hint sweeter and more cherry. He said it was a good pairing! 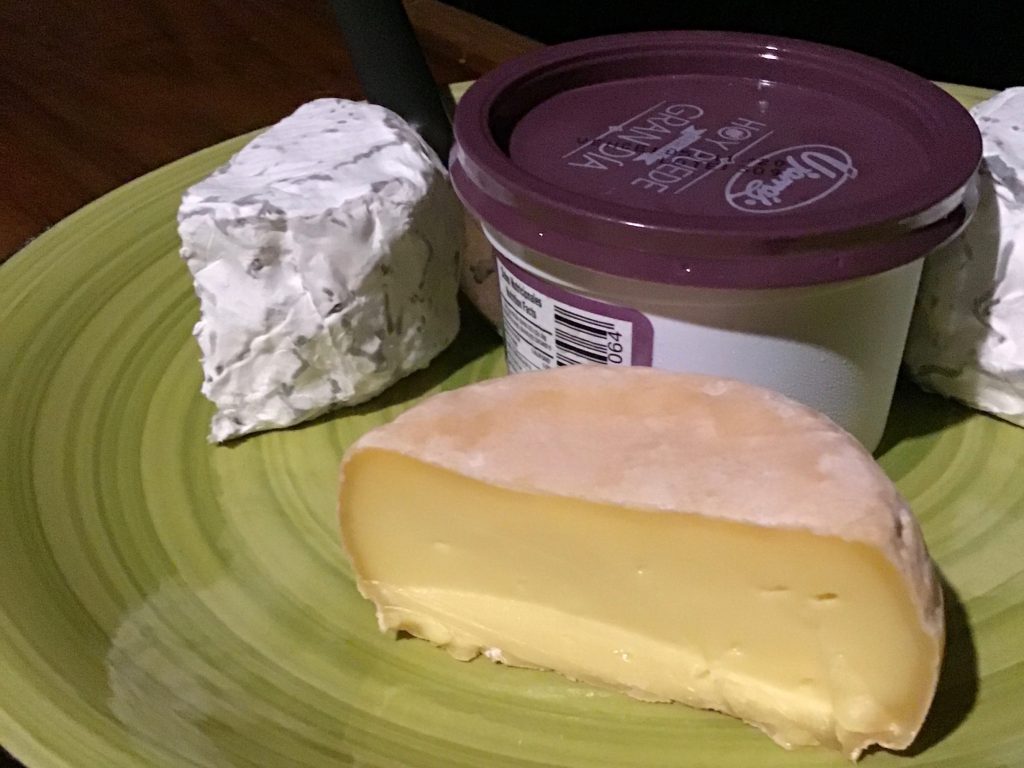 The second cheese was the Tomme Guayabo, made from cows milk with a yellow paste on the inside. It definitely had a barnyard funk to it that I link to cow’s milk. Neil noticed a tart milk flavor with possible hints of fruit. The texture was soft and we both liked it. The flavor was milky to me too but also buttery and funky. I preferred the paste to the rind part since it was a little hard.

When we paired the Tomme Guayabo with the Santa Sangria, the wine was slightly more tart to me but the cheese got a chlorine rinse flavor. Also it wasn’t as buttery. Neil thought the sangria had more pineapple and citrus and the the cheese was less funky. He said the fruit in the sangria lingered through the cheese and that a watermelon flavor appeared in the wine. Sounds like a good pairing to me from reading Neil’s notes, although I didn’t really like the sangria with the cheese.

We had purchased a small tub of blackberry jam too in order to pair with the cheeses. Neil thought the tomme guayabo with the jam was jammin! I still picked up that chlorine rinse flavor so I didn’t like the jam with the tomme.

If I had to compare the sangria to other ones that I’ve tried in the past, I probably wouldn’t get this one again but it worked out for an easy cocktail that day. And although the fruit cocktail was easy, I’d prefer my oranges, strawberries and apples that I usually add.

I’m so glad we found those cheeses by Le Chaudron, I’ll definitely look for them again! It’s so great that we’re figuring out artisan style cheeses here since we never found them in our first trips out to Costa Rica. I was already checking out their website to see where else I might find it now that we’re in Perez Zeledon. There’s also quite a selection, so I could either get the same ones or try something new.