A Year in Cheese Series at the Durham County Library 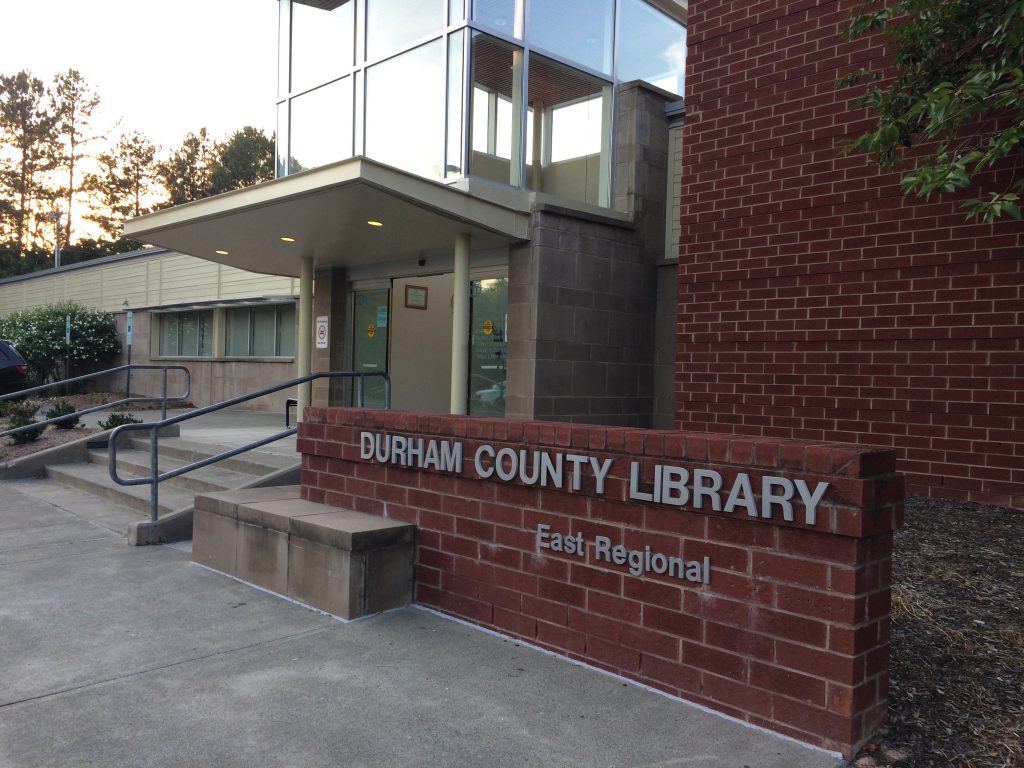 I was so excited when my friend Jo told me there would be a Cheese Event at the Durham East Branch library. Yay, cheese and the library! It was even free. The event was sponsored by a grocery store called the Durham Co-Op and the theme was sheep and goat cheeses. Mmm stinky barnyard cheeses, just what I prefer! 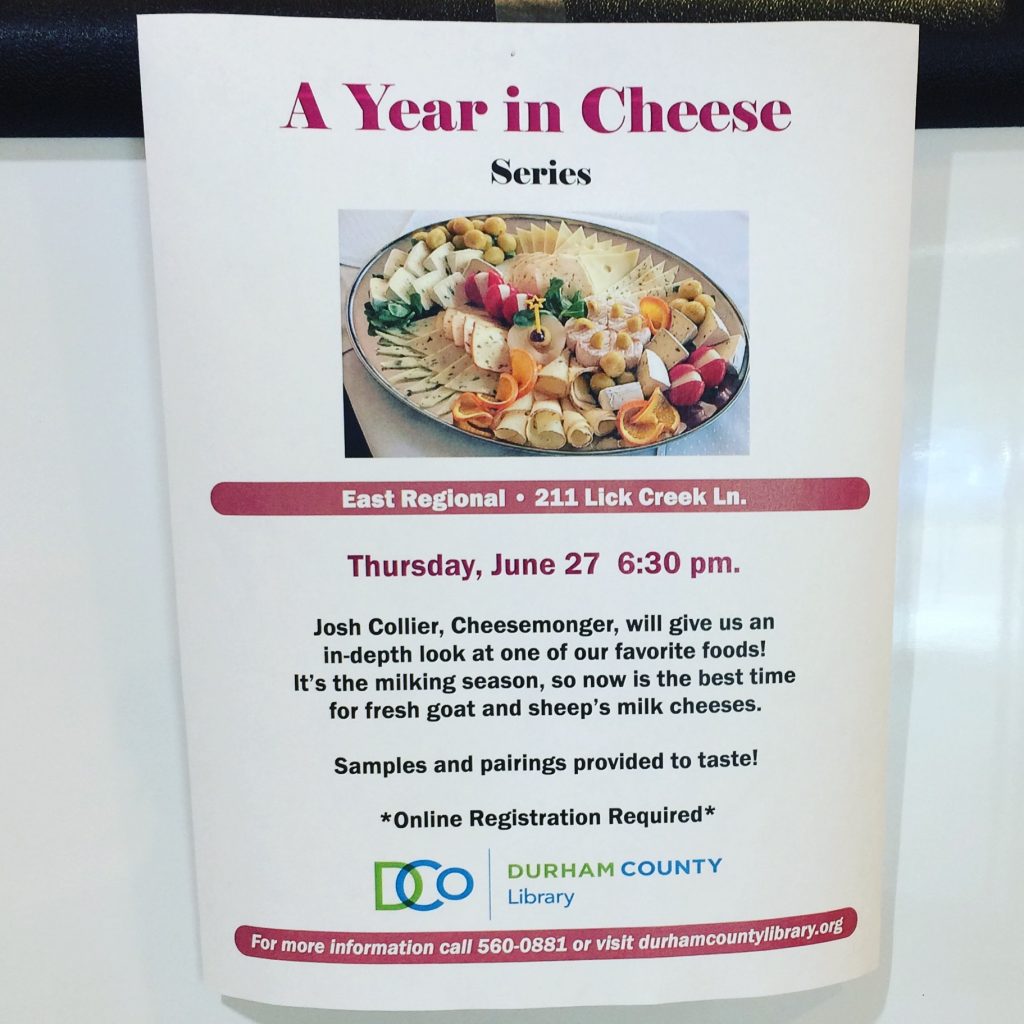 Josh Collier is in charge of the cheese program at Durham Co-Op and he has been leading this “A Year in Cheese” program for the library. Before moving out to Durham, NC he lived in London and worked with cheese there. He even curated the cheese for William and Kate’s Wedding. Imagine that, having a cheese curator for your wedding? Yes please! 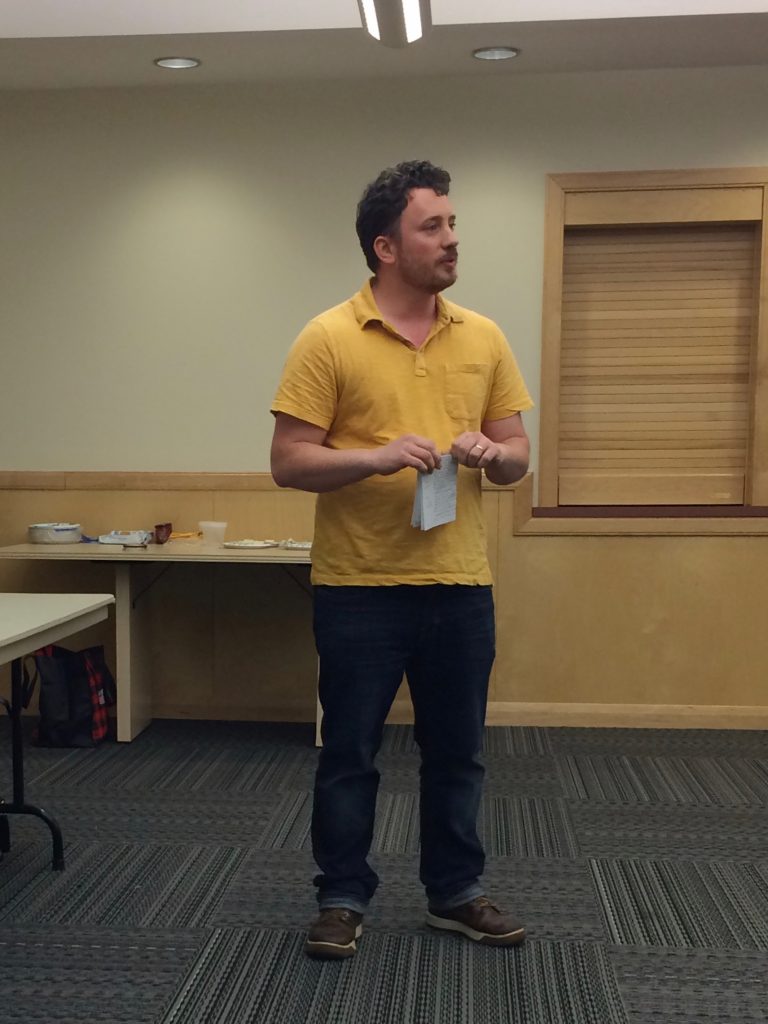 Summertime is the time of the year for baby goats, baby sheep and lots of milk, hence the reason for picking that topic for the evening. Sheep don’t lactate quite as many days as goats and they produce a lower yield of milk so that’s why you don’t find many sheep cheeses. It’s also the reason for their higher price tag. Did you know that some cheesemakers mix two types of milk because they don’t have enough to use only one? Pretty cool, that was the first I’d heard this. I also really look forward to cheeses that have more than one milk. Who knew it was something that helped the cheesemakers?

Many people are familiar with the geographic restrictions and regulations on wine but did you know similar rules go for cheese, vinegars and other foods? We spent a little time learning about that. The PDO on the name of the cheeses signifies this designation. Another cheese factoid that I learned that night was that cheese flavors are very volatile so that’s why you need to let them sit out and warm up.

Now that we know a little more about cheese, let’s move on to the tasting notes. 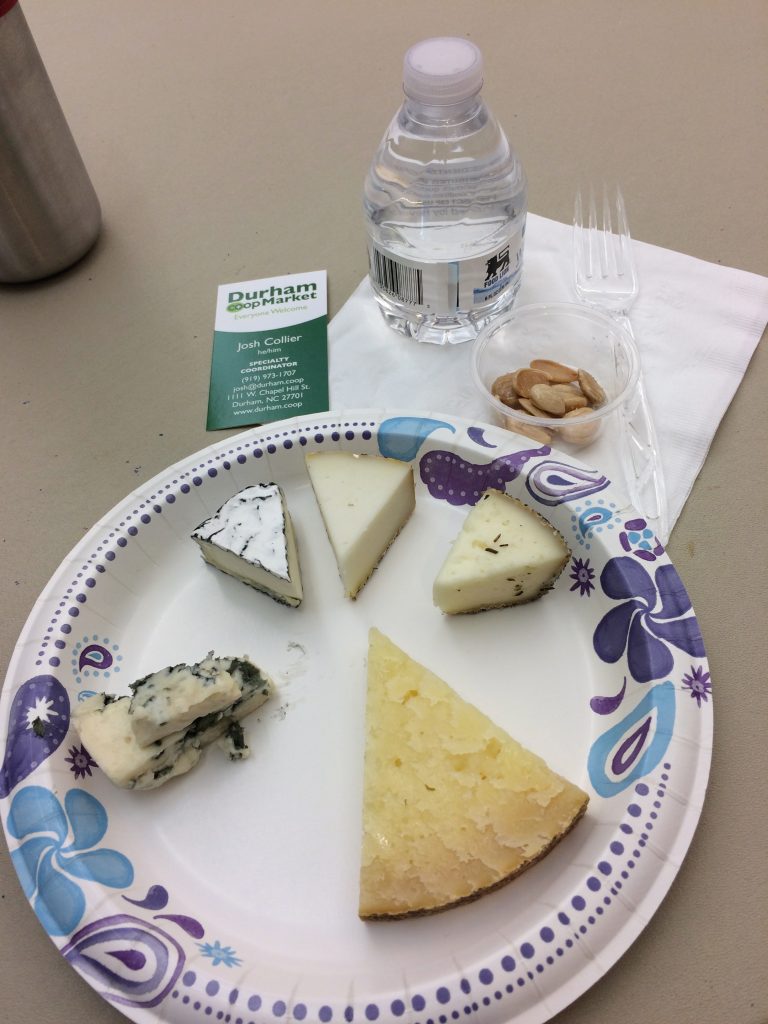 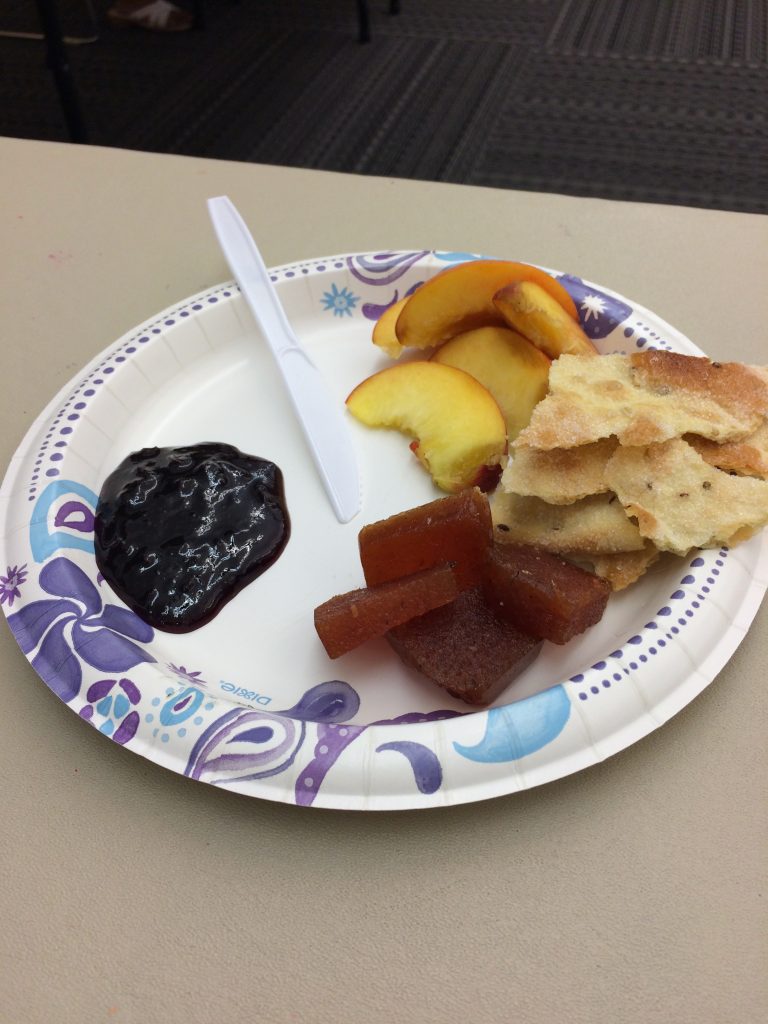 Since some people in the class were new to cheese tasting, he even provided a listing of possible flavors you might want to look for.

The evening was set up as an “informal night of cheese” so each person was free to taste their 1 ounce sample at their own pace and add any of the accompaniments. Of course, Josh did tell us a little about each cheese and gave suggestions on what we might want to taste together.

The first cheese, Hunkadora, was from Prodigal Farm, a local farm in Rougemont, NC. This cheese is a pasteurized goats milk cheese with a vegetarian ash coating. It’s aged for about 8 weeks and since the entire dairy, cheesemaking, and aging all occurs on the farm its referred to as a “farmstead cheese.” When looking for aromas, I found salt, milk and it tingled my nose. The texture was thick and I could taste milk from the start to finish. I liked the rind too, it wasn’t over brined. When I paired the cheese with the sour cherry spread, it worked well. We also liked it with the peach. North Carolina has so many good cheeses. I always look forward to coming back!

Next up, we’d try another goats milk cheese, Julianna, from Capriole Farm in Greenville, Indiana. The white rind was coated in herbs and was edible. If you ask me, it really made the cheese! You could smell the lavender and chamomile flowers on the rind. The flavor was very rich and I ate it all together, rind and all. It kind of reminded me of the flavor of an herbal tea. When I tried only the paste, it was plain and a little salty. We tasted this cheese with the torta (cracker) and the anise in the cracker went great with the cheese flavor. 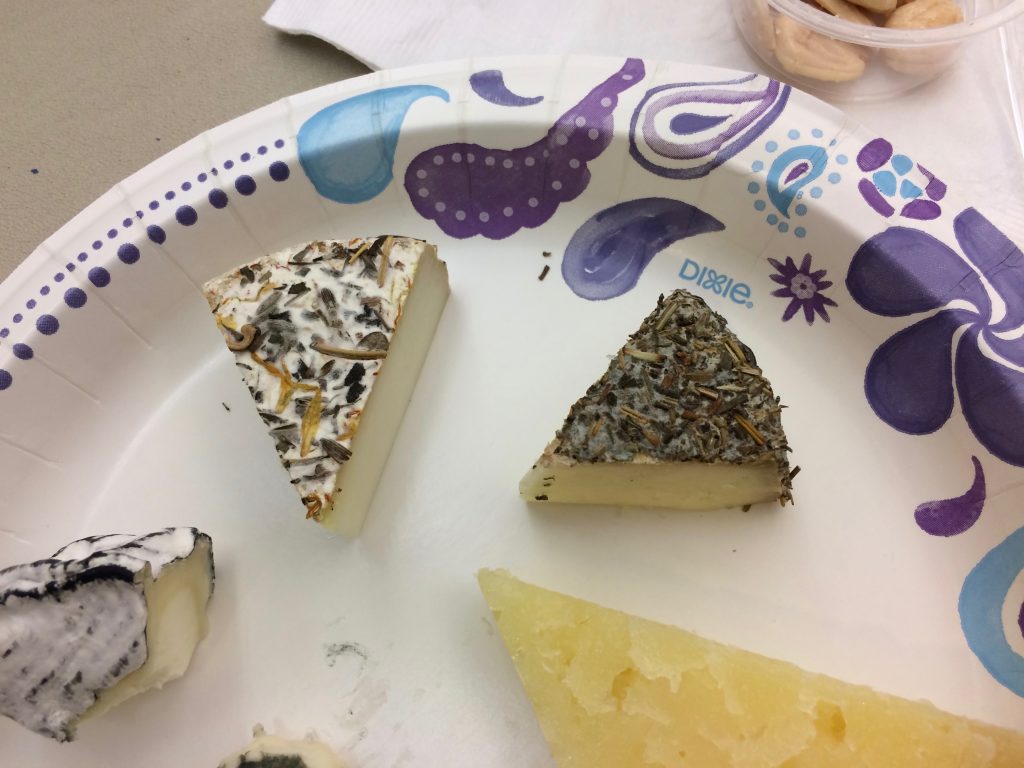 Josh selected the next cheese because it was a French cheese prepared similarly to the Julianna. The Fleur de Maquis is made from sheep milk in Corsica, France and is named after a plant that grows in the area. We actually had somebody in class that had been to Corsica, and she whole-heartedly agreed that it does smell that way there! The cheese smelled like savory herbs that reminded me of italian seasoning. The flavors were herbal, milky and seemed less funky than I’d expect for a sheep cheese. I think that is why we transitioned from goats milk with this one. The texture was soft and there was lots of herbs in the flavor. I chose to pair this cheese with the torta (cracker) too and the paste became more flavorful.

Many people have tried Manchego cheese but did you know that was made from sheep milk? This one is the aged version and you can tell that from the name “Curado”. Manchego gets its name from La Mancha, the part of Spain that it comes from. We also learned that this specific cheese is made from only a single herd of sheep so it’s more of a boutique brand. I know that I usually like Manchego and this one didn’t disappoint. The aromas were funky and buttery with a flaky texture. The cheese tasted like salt and even tingled my tongue. When we paired the Manchego and quince paste, they were sweet together and not as funky.

Roquefort, our final cheese of the evening, is one of the oldest cheeses on record starting it’s production back in the 1400s. The lacaune breed of sheep are milked for roquefort cheese and it turns blue from the penicillium roqueforti bacteria being added to the milk. The roquefort we tried was produced by Gabrielle Coulet, an artisan cheesemaker. This cheese smelled like funk and brine but I still went back for more! The texture had those little crunchies that I love and a salty, funky, lingering flavor. If you don’t like all that funk, don’t pair it with peaches-it got so funky! The quince paste helped it all calm down a bit and become fruity and less funky.

What a cool event at the library! I couldn’t believe how much cheese they gave us, either. I was still enjoying my plate as they cleaned up for the evening but I had to fully think through all my pairings. Jo and I had so much fun and although I didn’t specifically call out any of her notes, I think we were getting similar results that night.

My two favorites of the evening were the ones with the herbed rinds. I wonder if I can find them anywhere else in my travels? I’ll definitely be keeping my eye out for them! It was also nice to find out some new cheese facts. Always great to learn more about cheese! 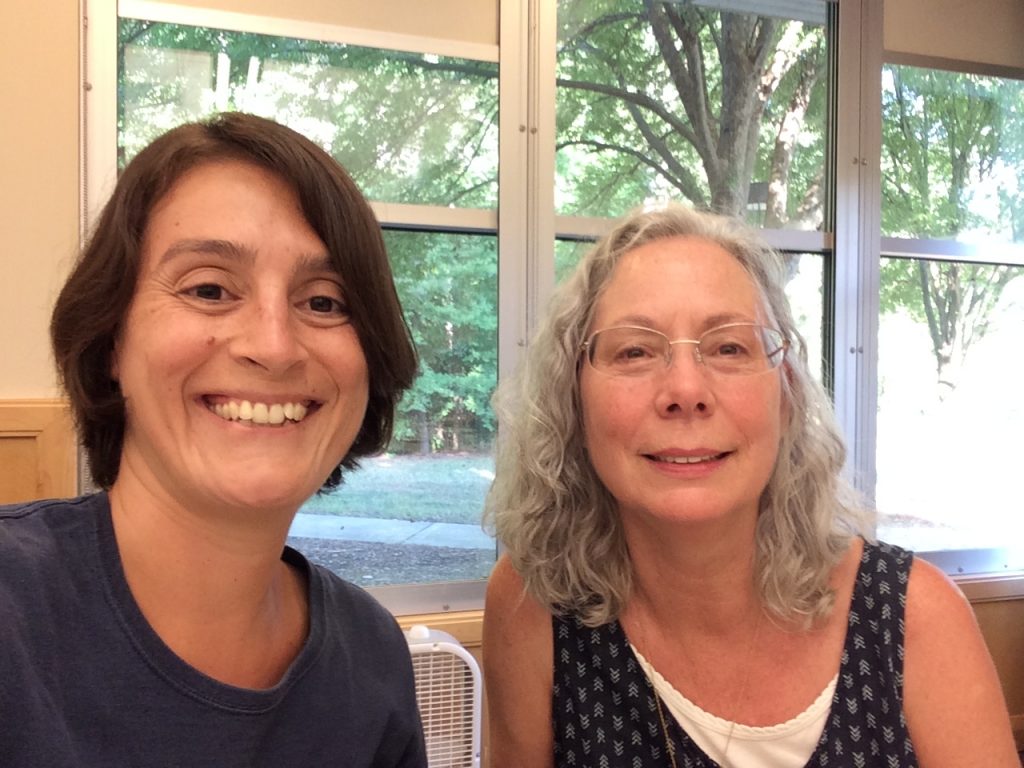