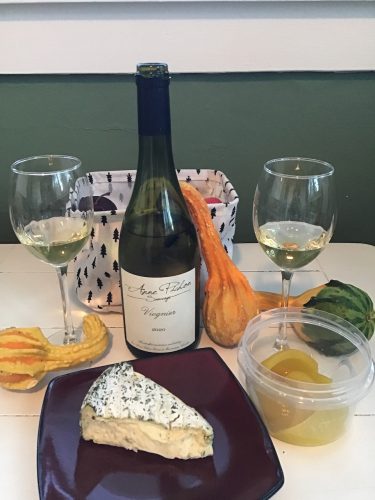 Neil called this “One of the best wine and cheese pairings in 2021” and it’s taking until now for us to write it up but hey life happens right? We mentioned in social media, that we found an amazing wine and cheese shop in Red Lodge Montana (Babcock and Miles). They recommended this pairing to us so we finally present the Anne Pichon Viognier and Fromager d’Affinois Cheese with Garlic and Herb.

This soft ripened cheese with herbs caught my eye first so I asked which wine they’d recommend. I was thinking it should be something French but I needed some guidance. The staff there was so helpful and happily suggested the Sauvage Viognier by Anne Pichon. “It should be able to stand up to such a bold cheese!” So in my shopping cart it went.

Neil and I sat down to enjoy this pairing during happy hour on our sun porch. The sun had already set but we put on some chill jazz music and we were ready to close out that week!

I began by swirling the wine to identify pear, honey and lemon aromas. The lemon flavor was so tart that it made by tastebuds stand up. Neil noticed a few different sides to the wine. For him it started as lots of minerals but then vanilla and butter with a round smooth flavor. Suddenly those soft flavors went away and it was tart on the sides of this tongue. When he tried again, the butter came back but it was still crisp too. What a bold wine!

The D’affinois with Herb looked so good! We had warmed it up to room temperature and it seemed it was a double or triple cream brie from the shape and appearance. We also figured it was most likely cow milk from the coloring of the paste. It smelled so good, like garlic, butter, basil but not quite as strong as oregano. The rind tasted like most soft ripened rinds but there was flavors of garlic, a mild paste and some herbs but not too many. Neil agreed it had a very herby aroma, with perhaps a hint of dill. The rind was funky and the paste was creamy. He felt it was a good balance of herbs too. 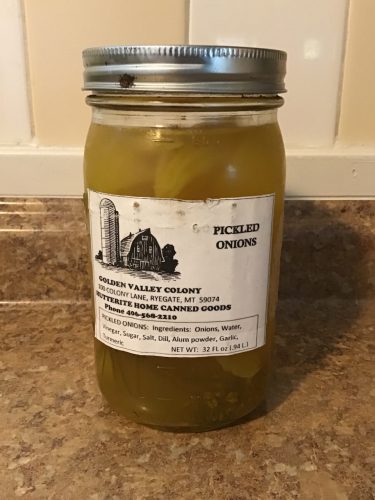 We figured we’d also include our Amish pickled onions in the pairing because Maria hadn’t had a chance to try them yet. Also we were recently served pickled onions on a charcuterie tray. They were pretty wild, they were onions that tasted and smelled like pickles! Neil really liked them too. We wondered when else we could have them and decided they would be really good on a hamburger instead of pickles.

The time had come to pair the wine and cheese and see how both these bold items worked together. Both Maria and Neil found the wine to enhance the funkiness of the cheese! Things got so funky that it been seemed like there was even cheese funk in the wine. The cheese really stayed on my tongue too.

After that initial funk the wine seemed mild but then that tartness returned after a few more sips. Neil also picked up a lot of butter from the cheese right after he paired it with the wine. Maria was able to smell oak in the wine but never got to the buttery point. Maybe that’s because the crackers were so buttery? They really helped to cleanse my palate.

The wine really brings out the funk from the cheese and we both liked that. There were even flavors of herbs or pickles in the finish from the pairing. This wine was very different on its own than with the cheese. Neil liked it both ways and dubbed this one of the best pairings of the year!

We really needed the break from life to just sit there and enjoy wine and cheese. Thanks so much to Babcock and Miles for recommending such an interesting pairing!