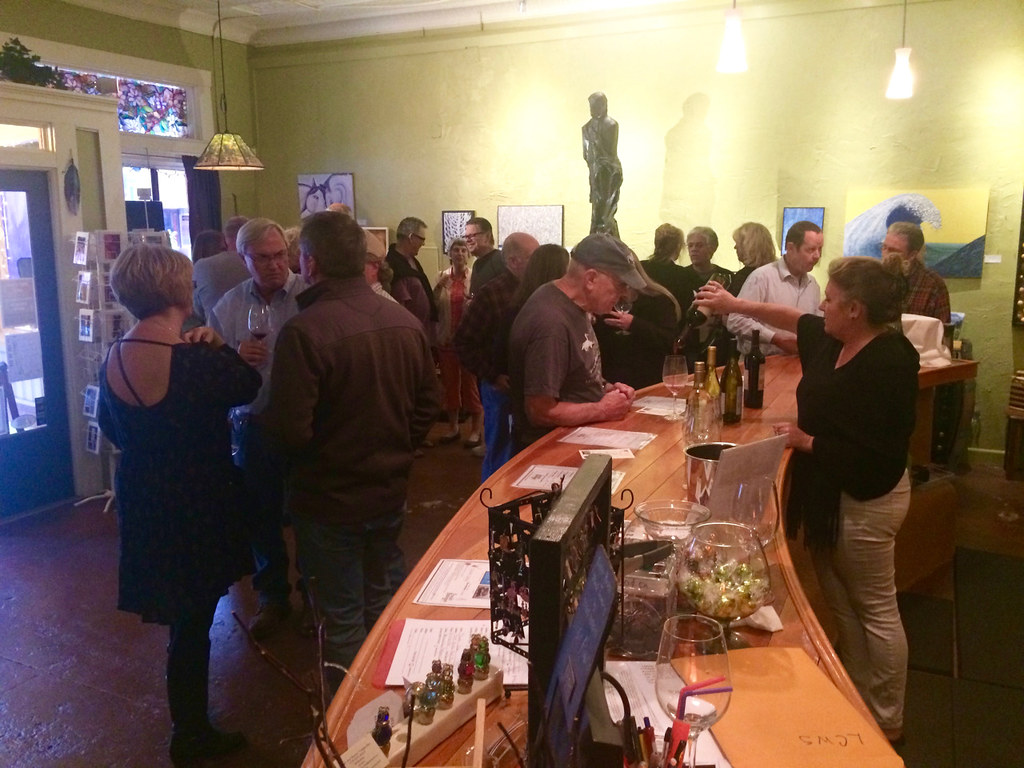 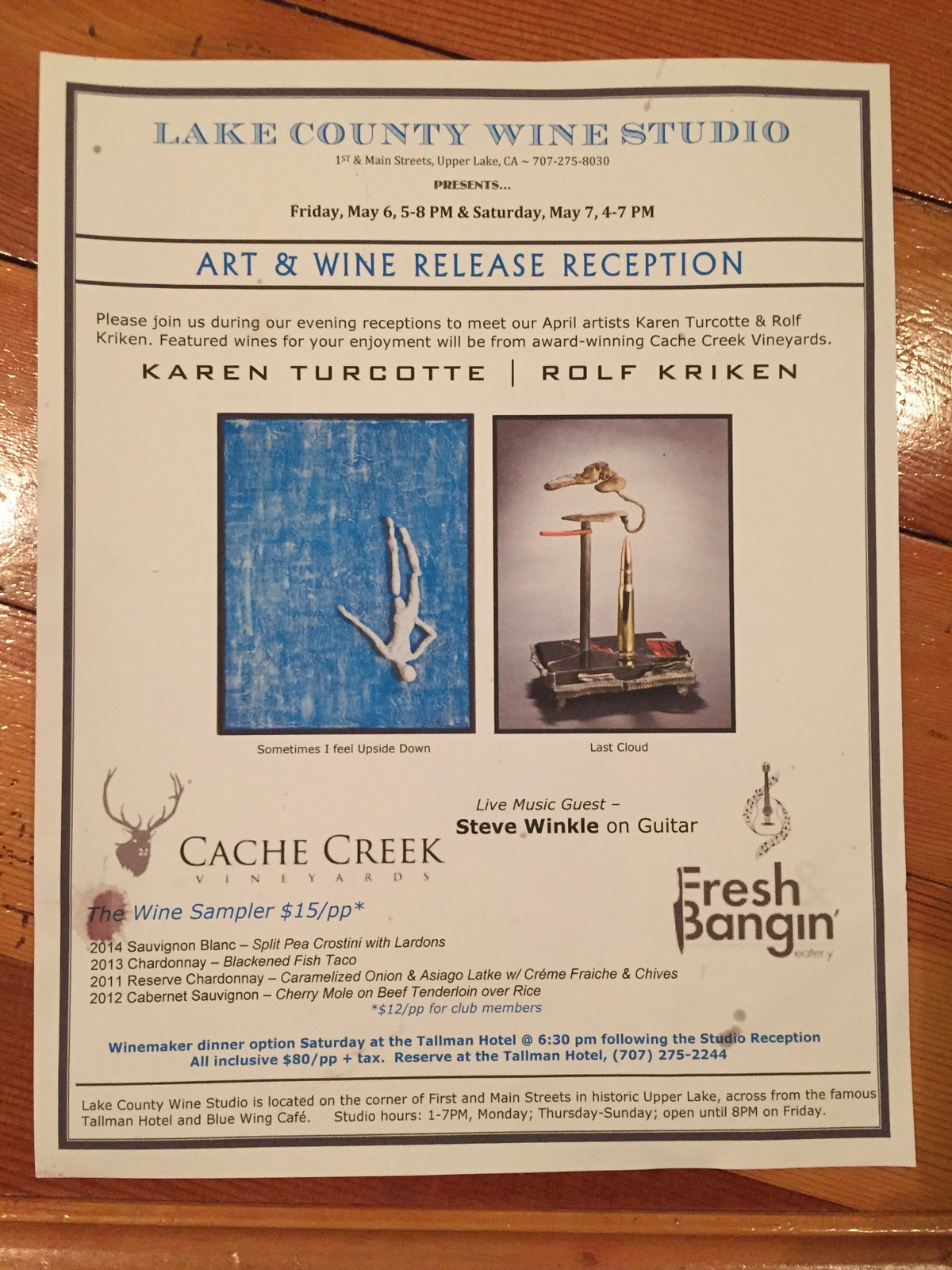 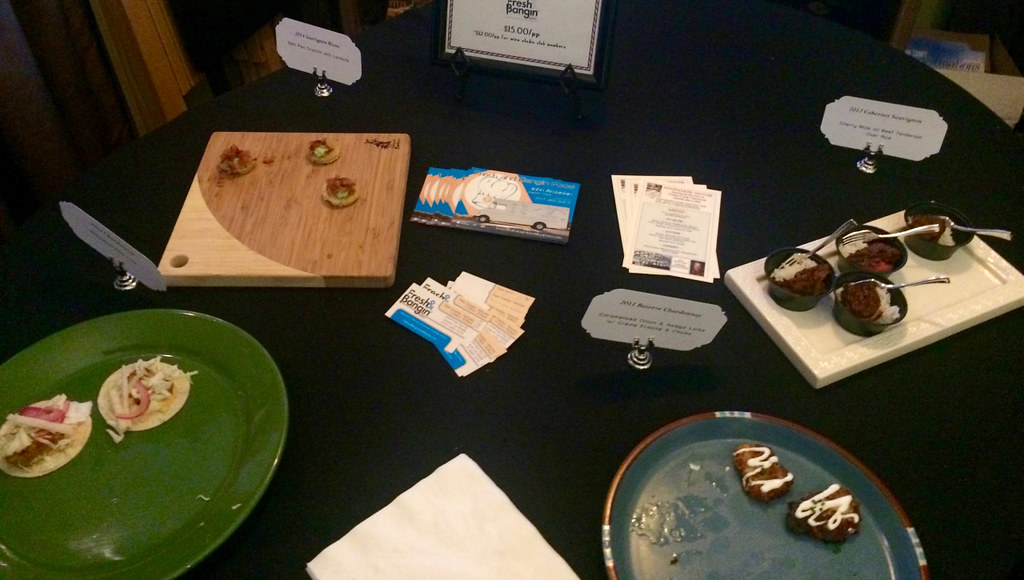 We took a break from the work in the winery and vineyard, to attend the Art and Wine Reception at Lake County Wine Studio, http://www.lakecountywinestudio.com/index.html. What a cool idea: wine and food pairings, artists and their art; great for a Friday night!

During a previous trip to Lake County, we had been introduced to this wine shop. They represent wine brands from all over the area, so it’s a great one-stop shop! This event featured a specific winery, Cache Creek Vineyards, http://www.cachecreekvineyards.com, for the wines, as well as appetizers by Fresh & Bangin’ eatery, http://www.lakecountywineries.org/members/fresh_bangin_eatery/details, paired with them. There was even live music!

Lake County Wine Studio showcases local artists each month and this event is thrown as a chance to meet the artists. In May, Karen Turcotte and Rolf Kriken’s art will be available for sale. Ms. Turcotte’s art uses mixed media and cool natural items. Mr. Kriken creates metal sculptures and wall hangings.

2012 Cabernet Sauvignon and Cherry Mole on Beef Tenderloin over Rice

It was so great to just hang out and take a break. We got to have some nice conversations with the locals but did attempt to put together a few tasting/pairing notes for you.

The Sauvignon Blanc smelled fresh and had hints of melon. We were both surprised that it wasn’t really citrus. The wine was a little tart but not as much citrus as we’d expect. When we tasted the split pea crostini with the wine, the sauvignon blanc seemed to become more tart.

The 2013 Chardonnay definitely confused me when I swirled and sipped it because it reminded me of tortellini soup. Maybe that would translate into salt and butter? No idea why it would have made me think of that but Neil enjoyed the wine. As I paired it with the fish taco, I didn’t notice much influence from the food but I was preoccupied with the idea of it reminding me of tortellini soup. Neil thought the pairing was really nice, he said the wine cut through the blackened flavor and brought out the lime.

The Reserve Chardonnay helped me focus better, since it had butter popcorn aromas. This made more sense to me. The wine was smooth and tasted like buttery caramel. After pairing the wine with the latkes there was a bitter finish in the wine but then my mind got turned upside down again. This time I thought I tasted chocolate, like mocha, maybe more like coffee and chocolate. Normally if a strange flavor appears, I think it must be a fluke but it happened twice. I really don’t know how something with potatoes and onions could make that appear but it did.

When our final wine, the Cabernet Sauvignon, was poured in our glass we learned that it was aged in barrels and stored in caves. Neil found it to be a fruit forward wine that was light but tasty. I noticed cherry and anise aromas and agreed that it seemed lighter than previous cabernets that I’ve tasted. This wine certainly had some spice to it before we tried the food but when paired with the spicy beef, the spice was cranked up. Neil thought the wine initially had more berry flavor but then hot cinnamon appeared. The wine was so spicy to me that it felt like my ears were burning. I’d say next time I’ll just stay with the wine alone.

Despite the fact that I had some strange flavor combinations, the wines were overall very good. We both really enjoyed the appetizers and the chef even prepared a special gluten free version of the split pea crostini for him. And we always enjoy being surrounded by art, so it was totally an event for us. Next time we are in Lake County, we’ll have to plan to go to that month’s Art & Wine Reception. Thanks to Lake County Wine Studio for such a great event!