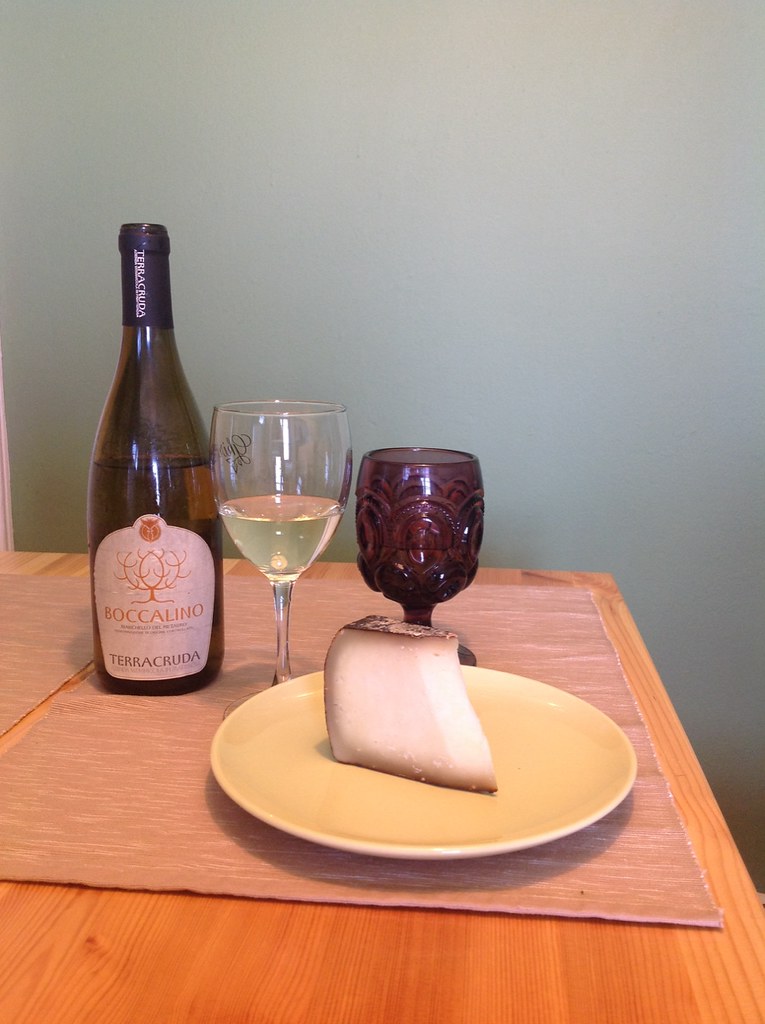 I purchased the Boccalino wine back in May at Enoteca Vino Nostro. (http://mferraro73.tumblr.com/post/86667854043/enoteca-vino-nostro-wine-class-my-friend-karen) I asked Maria, the sales associate, which white wine would be smooth and creamy, maybe aged in oak? She said Italian wines aren’t really like that but recommended the Boccalino as something that would be easier to handle than the Vermentino wines I’ve tried in the past. Funny thing is that when I researched this wine online, it said it was the “midweek wine for when you don’t really want to think about wine.” So let’s see what this mystery wine actually tastes like.

As we swirled the wine I noticed mineral aromas, and we both found aromas of crisp apple. Neil noticed a hint of lime and we agreed on apple flavors. The wine had a lighter texture and a lasting finish. I was trying to decide what type of American wine to compare it to, but couldn’t really place it, Neil was reminded of Sauvignon Blanc.

We purchased this cheese at Cheese Plus after tasting a couple different samples that might complement the Boccalino. The Pecorino Ginepro cheese is an Italian sheep’s milk cheese that was soaked in balsamic vinegar and juniper berries. It seemed like the type of cheese to spice up this “midweek” wine.

The cheese definitely had a noticeable funk to start with salty aromas. When Neil described the texture he called it powdery, then creamy and I thought it was more like a medium plus texture. Neil identified a light flavor but long finish. I enjoyed the dry, salty, tangy flavors.

So what happens when you pair the Boccalino and Pecorino Ginepro? I had a peculiar reaction, it was almost as if my taste buds retreated from the wine after the cheese had coated my tongue. The wine became almost too acidic and the cheese felt very thick. Neil didn’t have this affect, he said after the cheese, the wine felt creamier and the fruit became round in the mouth. He felt the flavor of the sheep’s milk seemed more noticeable after the wine. We both tasted more alcohol in the wine due to the pairing.

Neil and I really enjoyed this pairing for different reasons. I found it to have a noticeable reaction and Neil said it was a good flavor combination. I guess we are getting a better grasp on which wines and cheese will work well together.