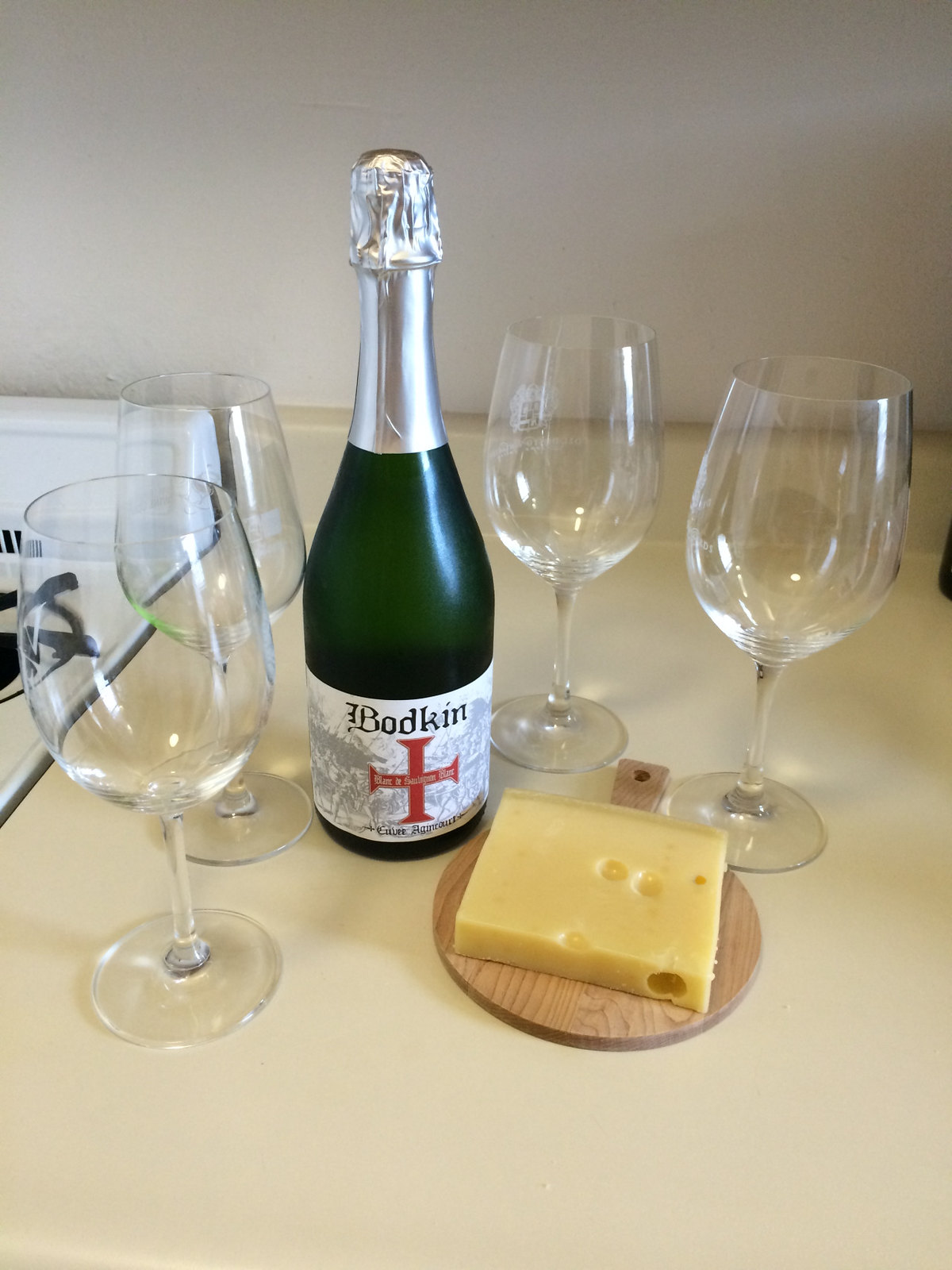 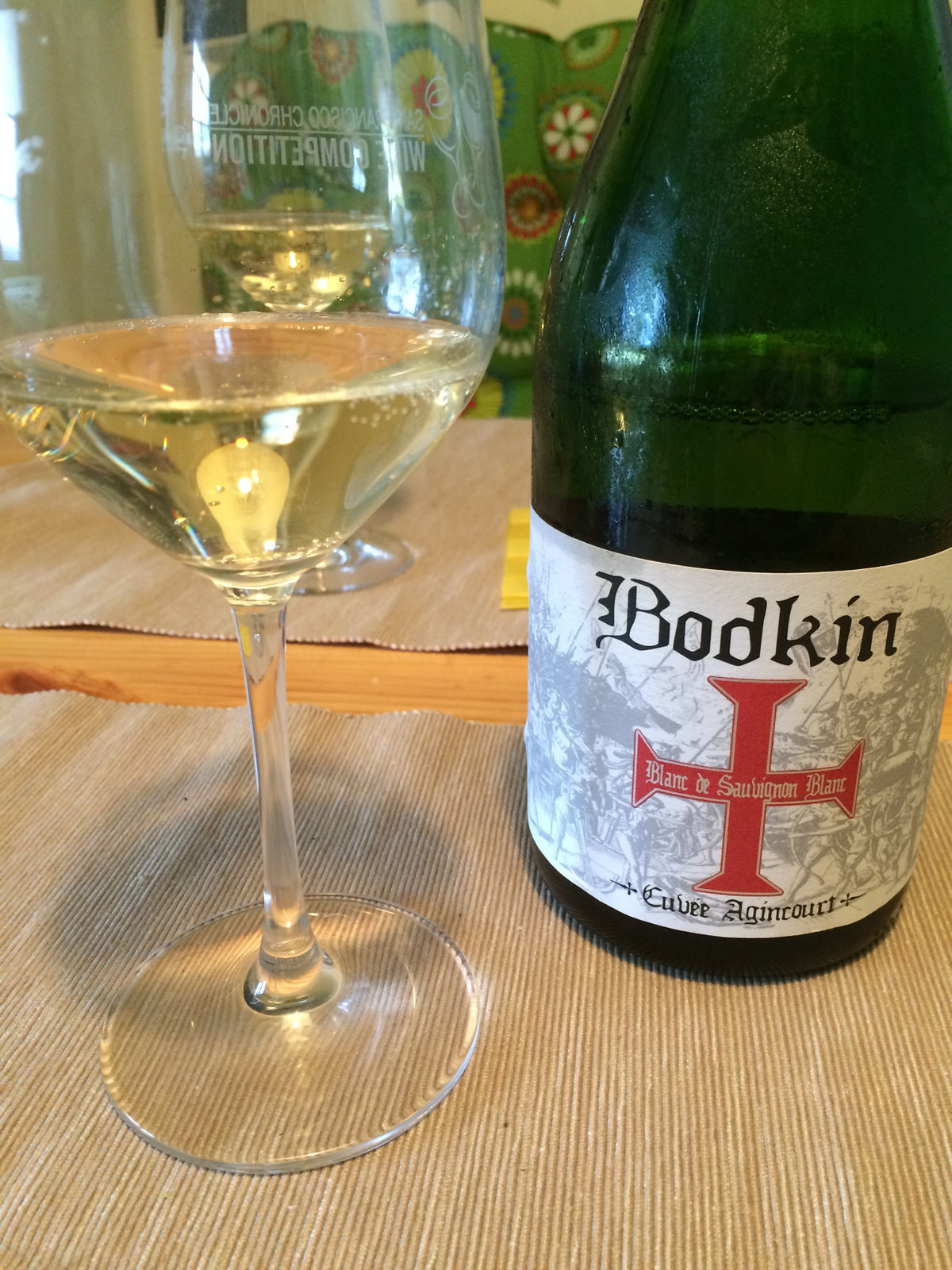 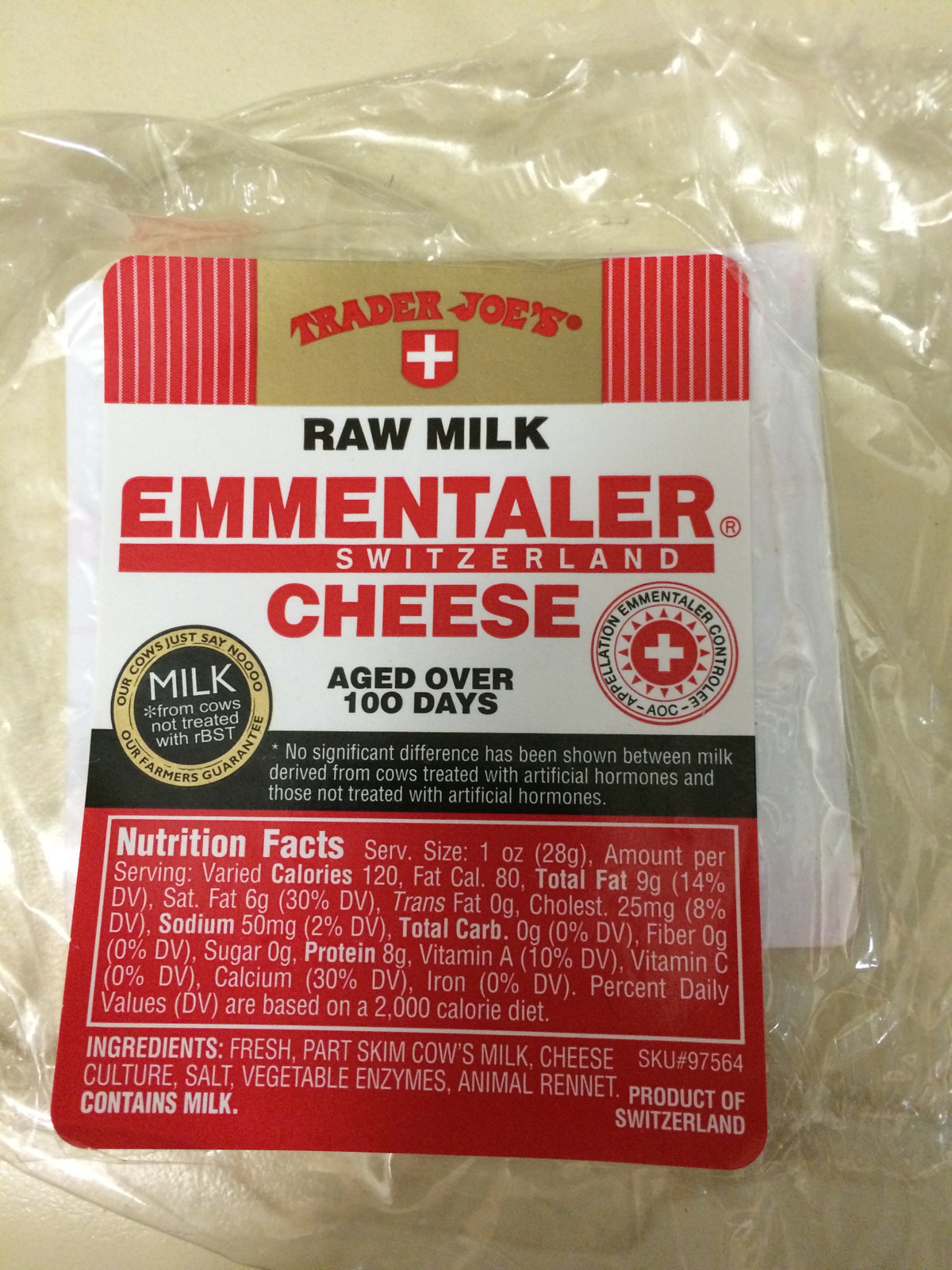 We had some friends in town from Switzerland so when I saw the Swiss flag on this cheese, it seemed like a good choice. We didn’t expect to learn so much by eating a “swiss cheese” with Swiss people. The wine is a sparking wine that we picked up on our recent trip to Lake County (http://mferraro73.tumblr.com/post/119076681308/lake-county-wine-tasting-in-order-to-celebrate) and the tasting notes for the cheese appeared to be a good pairing for the wine flavors.

This wine is a sparkling Sauvignon Blanc. Sparkling wines made in the “methode champenoise” typically contain chardonnay, pinot noir or pinot meunier grapes so this one is something different from what you might find. Recently we were saying how much we like sparkling wine but that we never have it. Since there were four  of us, this would be a good chance to enjoy one.

Our friend Benno, doesn’t usually go wine tasting so we were telling him the importance of tasting the wine slowly and thinking about what flavors he identifies. His girlfriend Nora is in the wine industry in Switzerland so she was ready to taste the wine. She quickly noticed lychee, grass and aromas that reminded her of springtime. Neil and I both picked up crisp apple aromas and I also made note of the pear aromas. Benno agreed with Nora’s comment of lychee but said it wasn’t sweet. When we tasted the wine, Neil found the wine to be very dry, with a long finish that kind of reminded him of toast. I didn’t think there was much flavor in the wine but did like the amount of bubbles. Nora agreed that there were more aromas than flavors and said it wasn’t a fruity wine.

Once we started the cheese, the discussions really got started. As I mentioned, I was more focused on the tasting notes for this cheese than the appearance when I purchased this cheese at Trader Joe’s.  Benno is a farmer whose family has cows that produce milk for cheese so he had quite a bit to share about the cheese making process for Emmentaler cheese.

He said it is a cheese that is usually eaten when it’s young, not necessarily one that would be aged. After the cheese is made in salt water, it is placed in the cellar but not brushed. (We actually got to see this “cheese brushing” process when we visited the cheese cave in Italy.)  He had recently read an article about this type of cheese and people were wondering why it has less holes than before? The holes are  produced by the specific bacteria that is used during the cheese making process but the decrease in holes is actually due to the increased cleanliness standards of the cheese making facilities.

Previously, it was possible for the cow’s milk to get hay into it from the barn. Then the bacteria would interact with the hay, to create more holes. Now there is less hay, so there are less holes. This cheese can also be judged for quality or grade by it’s holes. Nora told us the wheels of cheese will have “cores” removed from them to see how the cheese is progressing. So much to learn! As you may have already figured out, this is The cheese that Americans call “Swiss cheese.” And the Swiss, call it the “one with the holes!” The name “Emmentaler” refers to the region that can legally produce this specific cheese according to the AOC cheese laws.

Well after all that discussion, you can imagine we were really ready to taste the cheese. As I smelled the Emmentaler, I noticed a light funk that Neil described as the “smell of Swiss cheese”. Nora agreed that it smelled the way she would expect for an Emmentaler. Benno didn’t have much more to say so he just sat back and enjoyed his cheese. Once I tasted the cheese, I noticed the flavors to be a little dry, and tangy with a hint of smoke, characteristics that I would expect from Swiss cheese. Neil found it to be milder than he expected from the smell but did pick up a “pleasant funk.” Nora didn’t think the flavor was bold  or “full mouth.”

As we paired the Emmentaler and Bodkin Blanc de Sauvignon Blanc, we all found a noticeable interaction between the two. The consensus was that the wine tasted more like fruit, with a longer finish and the flavor of the cheese increased. Neil and Benno both made note of the wine seeming to have more bubbles. Nora found the cheese to taste more like cream. We all had a different opinion of whether the wine and cheese should be paired or enjoyed separately, regardless of the definite reaction between the wine and cheese. What a terrific opportunity to learn so much during our WineAndCheeseFriday!