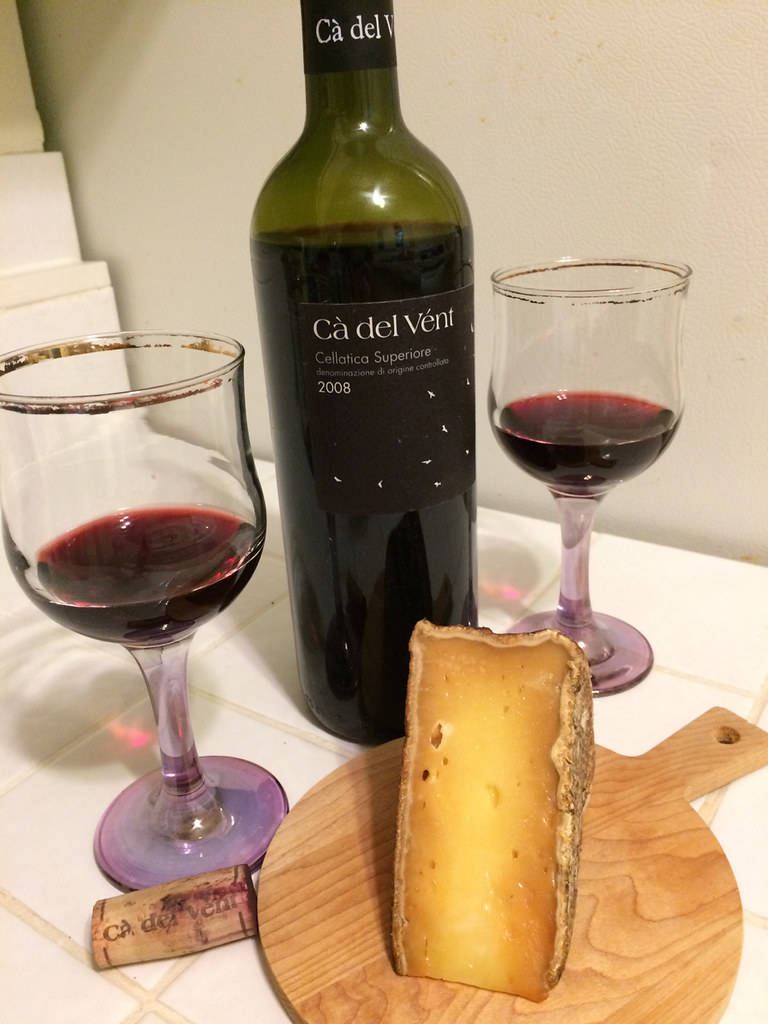 It’s hard to believe it’s been over a month since Neil and I did a WineAndCheese pairing together! The wine we’ll be tasting this week is the final wine from our Sommly.io order at the end of 2015. Many of the wines we ordered had an earthy/slate flavor profile to them so we thought this one might too. This past weekend we were pleasantly surprised to end up at a gourmet food shop, Locale Market, http://www.localegourmetmarket.com, and figured we might as well pick up some cheese while we were there. It was so much fun being in the presence of all that cheese! Neil and I identified the ones we’ve tried and the handful of others we had not. The main quality we were looking for was “out of the ordinary.” When we smelled the tomme crayeuse, we thought of a moldy basement and it looked pretty haggard also. It was exactly what we wanted. So without further ado, the pairing of Cà del Vént and Tomme Crayeuse.

Before the tasting notes, I’ll provide a little background on the wine. We didn’t know much about this wine when we purchased it, so I’ve done a little research now. Cellatica is the region in Italy where the winery, Cà del Vent, http://www.cadelvent.com, is located. Not familiar with Cellatica? It’s between Milan and Venice in Northern Italy. This specific wine is the reserve level of Cà del Vént and contains the varietals barbera, marzemino, shiava gentile and incrocio terzi n.1 (a cross between barbera and cabernet franc). I’d guess we chose this wine because it had Barbera in it. This grape is one of the Italian varietals we’ve come to know and love. Ok thanks for your patience, now we can start tasting the wine.

In order to prepare the wine, we opened it 3 hours before tasting. Also being in Florida, we thought the wine might benefit from being a little chilled. It spent about 45 minutes in the fridge and the bottle was slightly cool to the touch, just right! As we swirled the wine, we couldn’t believe it seemed like it still needed to open up or be decanted, but since we have no decanter we just continued on. There were so many aromas coming from the glass! We picked up dark fruit, slate, some smoke, plum, cassis and fresh green beans. I noticed the dark color of the wine, and then came the fun part of sipping the wine. This wine was definitely dry, possibly tannic or maybe volcanic, with blackberries and a juicy/acidic flavor. Neil identified rich currants, some spice, more green vegetables and something that reminded him of the umami taste: sort of salty like soy sauce. We both could tell that this wine was higher quality than the ones we’ve been drinking lately. There was so much to describe and experience! 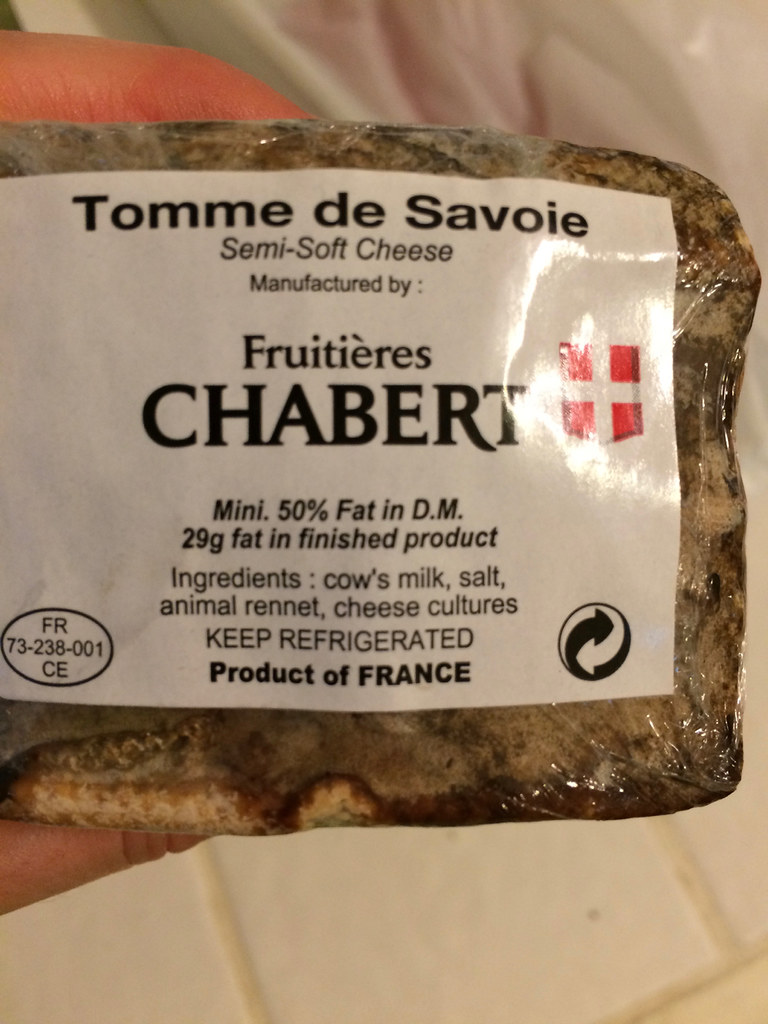 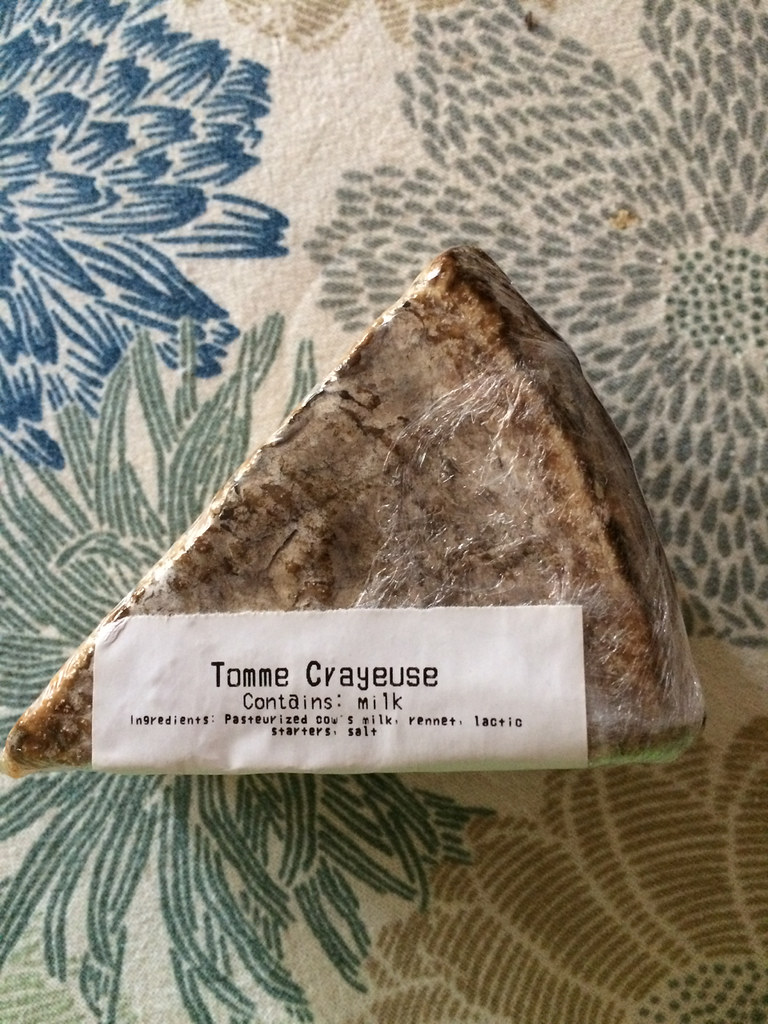 Now for the cheese, since we just kind of picked this cheese out of the air, I hopped on Google to find out a little more about it. There were a few different names on the package and I wasn’t quite sure what the name of the cheese was. Here’s what I found out. This type of cheese, Tomme Crayeuse was discovered when someone was trying to develop a better Tomme de Savoie recipe. Tomme Crayeuse only came onto the scene in the late 1990’s and it’s from the part of France that borders the Swiss-Italian Alps. This cheese is also known for the molds that grow on the natural rind, just in time for Moldy Cheese Day, 10/9, http://holidayinsights.com/moreholidays/October/moldycheeseday.htm Ok now that we’ve covered what cheese we are tasting, on to the tasting notes.

We already told you that the cheese was pretty stinky. We actually had to move it away from us while we tasted the wine so it didn’t confuse us. Once we got into the tasting, we realized that the rind was the funky part, the cheese by itself really didn’t have the musty aroma. We both began with describing the texture, which I called medium to soft and Neil said it was softer than he expected and reminded him of the consistency of tofu. (Note: we had the cheese sitting out for 3 hours alongside the wine to get it ready for tasting.) Ok now onto the funk, I thought it was like a barnyard and cows, Neil called it the funk of 40,000 years, and yes, that’s a good thing! He was actually transported to the barn in France during the autumn where the cheese was made and really got into it. Super Cool! Besides the funk, I picked up salt but not overly salty aromas and it smelled a little tangy but that was kind of dissipating. I think my nose was getting used to the overall funk.

After all that cheese sniffing, we finally tasted it. The flavor tingled on my tongue, tasted musty, funky and kind of like cheddar. Neil picked up hay and straw flavors. The texture could melt in my mouth but was kind of hard too, while Neil said it was smooth and creamy. The flavor definitely lingered and had a forest/earthy finish when I tasted it with the rind. There was a noticeable difference with and without the rind. Neil even enjoyed the rind better by itself than with the cheese. He was really into the ashy, coffee, pungent, strong, earthy flavors he was able to identify. Neil’s preference when tasting some harder cheeses, is to create really thin slices. He tried that trick with this cheese and I thought I tasted vegetables, maybe kale? Just like the wine, we were getting so into the cheese. It was kind of hard to move on to the pairing stage, but don’t worry, we did.

We both found the fruit aromas to increase in the wine after tasting the tomme crayeuse. The wine still tasted dry but the slate flavor increased and the smoke became more obvious in the wine. The cheese changed due to the influence of the Cà del Vént as well. It still tingled my tongue and had that funk but then I found a buttery flavor. Neil thought the cheese became super creamy and really tasted like milk along with the funk. Like we’ve been saying all along, the Cà del Vént and Tomme Crayeuse were both at a level we haven’t experienced in a while. The fruit in the wine would come and go, there was more spice in the wine and earth and funk in the finish. Neil tasted fruit and smoke in the wine, then smoky berry. We both enjoyed how much was happening during the pairing. It was kind of hard to capture all the flavors and complexity but that made it even more enjoyable.

We continued to enjoy the wine for a few days after the initial pairing and it kept changing. We even tried it with chorizo on the third day and the food really kicked up the spice in the wine. We both really liked it! So happy we chose this wine from Sommly, https://sommly.io, and it seemed like a great one to finish out the collection with!