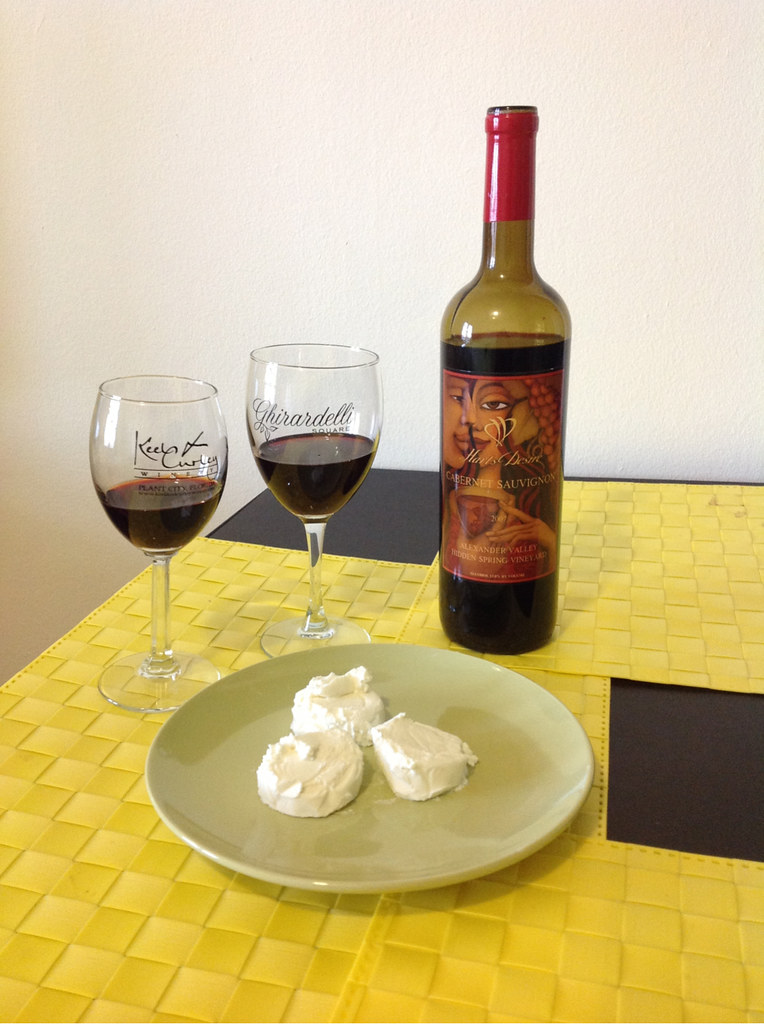 The wine we are tasting today comes from Hart’s Desire in Healdsburg, CA. (http://www.hartsdesirewines.com) We picked it up while we were there on our recent trip, and Shea gave us a few ideas of what flavors may surface during our tasting. We decided to go with a simpler cheese in order to allow those aromas to shine through regardless of the cheese.

I really like the label on this wine. It’s so artistic and fun! I have heard many people say that they choose wine by the label. Although this could make you buy a wine that you will not like, it is hard to figure out what to buy when faced with so many choices at the grocery store. I have to admit that I’ve chosen wine by the label before too and this one would have made me curious to try it out. Now on to the tasting…

Neil’s initial thoughts about the wine are lots of fruit with light tannins. He was able to identify currants, black cherry and plums. Great job Neil! I had a harder time identifying individual flavors or aromas. We both made note of the dark color. The hint that Shea told us was “chocolate”, the smell reminds me of chocolate but only slightly. I could pick up hints of it in the taste too but more in the way that chocolate coats your mouth. Once we really got to tasting the wine, Neil found it to have full flavor in the mouth and spice in the throat. I feel it was not as strong/overpowering as other California Cabs I’ve had, definitely easier to drink.

We both agreed that the goat cheese was creamy! Neil said it was distinctly a goat cheese and that it was good. It reminded me of cream cheese and was sort of mild.

When we tried the Cabernet Sauvignon with the Goat Cheese, Neil found that the cheese cleanses the palate and he gets the full flavor of wine again. I felt the wine livened up because of the cheese.

We think this was a good pairing because the cheese doesn’t overpower the wine and they worked well together! Neil suggested this as a good stand-alone drinking Cabernet, but maybe would be good with red meat too. Before moving to CA, I thought my favorite type of red was Cabernet Sauvignon because past Cabernets I had tried were not too heavy or tannic. This wine is what I expect a Cabernet Sauvignon to taste like. It is easy to sit down, drink and take time enjoying! Thanks to Shea for suggesting it!

Since this wine was from 2007, it was suggested that we open the wine for a day and then do the tasting. We forgot to do this so we tried it again on Sunday to see if the flavors had changed. I thought it still had a good aroma and full flavor. Neil thought it smelled sweeter and got a big hit of chocolate at the end, similar to bittersweet cocoa.