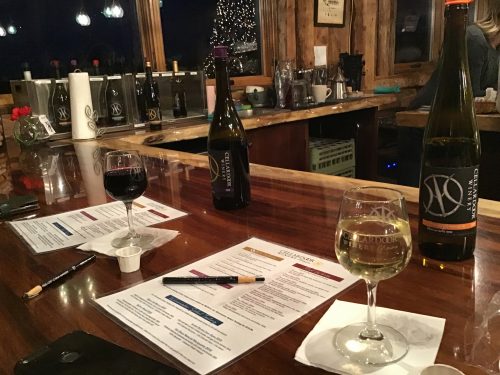 We visited Cellar Door Winery, back in December. We were in Maine visiting our friends Dwaine and Beth and she was so excited to show us one of her local favorites. It’s fortunate we were there when we were because they were only days away from closing up for the winter season. They’d open back up sometime in April. How could we have known that would be the last time we’d be wine tasting for a long while? 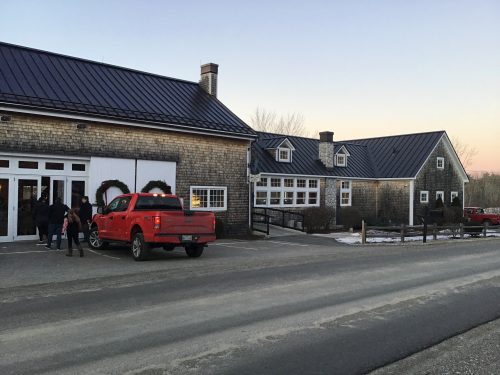 As the tasting began, we learned that this was the largest winery in Maine. Despite it being cold outside, we were still able to look out the window to see the large vineyard. We learned that one of the grapes out there, Marquette, is a hybrid developed by the University of Minnesota. We also found out one of the reasons Beth likes it so much is because of all the cool events they have there including dinners, concerts and food pairings. 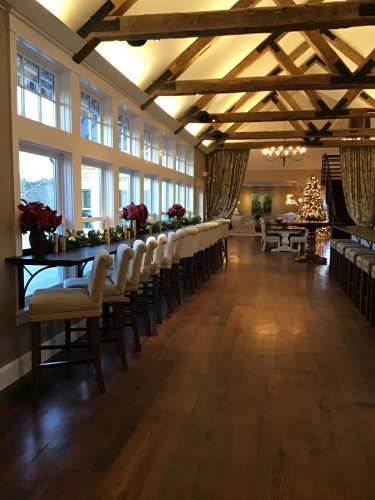 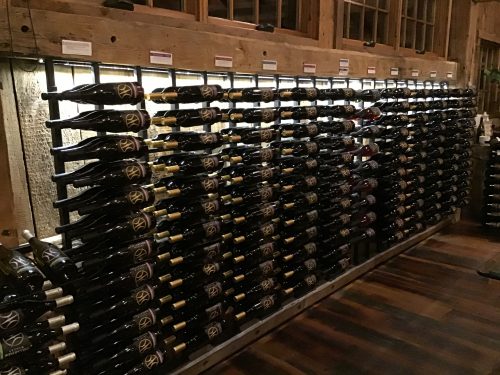 As is typical for Neil and I we did two tastings and shared both of them, you get to try more wines that way. Beth did a tasting and Dwaine had a couple wines by the glass. Although it wasn’t on the menu, Dwaine started with the Perfect Stranger wine, one of their favorites. 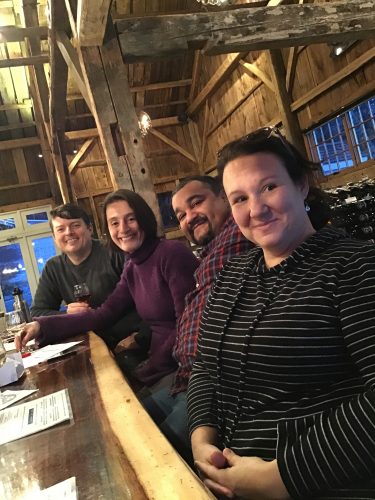 Heres what we tasted that day:

I found the viognier to have a strong aroma that changed into perfume. Then as I tasted the wine the texture was light with perfume, fruit, vanilla and then cloves. Neil thought it was oaky and butterscotch. 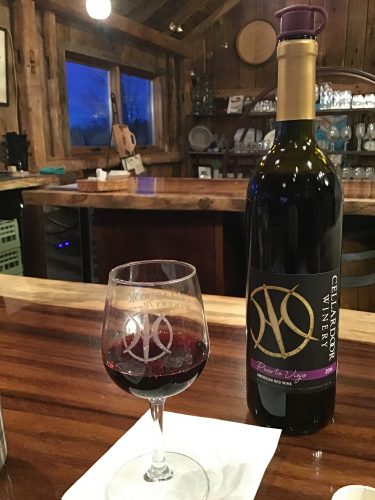 The next wine, Puerto Viejo was a blend of Garnacha, Syrah, Cabernet Sauvignon and Merlot from Washington. I loved the aroma that was filled with berries and butter! The wine was dry, spicy, with notes of cigar and a vanilla finish. Neil described the aromas as jammy and raisin, definitely making him think of a Zinfandel wine. The flavors were even jammy and pepper. He was a fan!

The Ned Said Red was another blend, this time containing Cabernet Franc, Carmenere, Merlot, Petit Verdot and Cabernet Sauvignon. We identified dry aromas of earth, berry, and spice. I picked up spice, a long flavor and a dry finish. Neil agreed that it was dry but also easy to drink with a zingy spice and plum. We grabbed a bottle to drink later in our trip but never got around to it so it’s waiting for us at my mom’s house.

Our final wine of the first tasting was the C’est de l’Or, a dessert wine. This wine was created in the port style using Syrah wine with brandy and Maple Syrup from Maine. Yes it was as delicious as you can imagine; sweet and smooth with tons of caramel flavors and aromas! Dwaine tried a sip too and described it as a different type of sweet. I was sold, we knew we should take a bottle to have on Christmas Eve.

Before we wrap up the first set of wines, Beth tried the Syrah. We had just tried another Syrah with them the night before and she really liked this one too. We may have found a new wine for her.

The Blanc de Blancs was a bubbly blend of Frontenac blanc and Frontenac gris both grown on site. The aromas were floral with fruit and italian bread. The wine had a light bubbly texture and a crisp flavor. Neil simply said it was nice and clean.

The Bulles Rosé is another bubbly blend with the first two grapes as well as Marquette and a bit of Petite Pearl from another Maine vineyard. This one had aromas that reminded me of toast with jam, yum! The wine was light, clean, rich, flavorful and zesty! Neil noticed aromas of strawberry candy with a dry flavor.

The Artist Series Iron Gate wine is the only wine in this collection with grapes from Washington. The blend included Cabernet Sauvignon, Cabernet Franc, and Merlot. I found the blackberry aromas to smell really good. This wine was dry, spicy and had a noticeable acid. Neil said this was a big red filled with pepper, cherry cordials and jam. It was a wine that could age.

There was only one wine remaining and it was another sweet one, the Vin Doux Naturel Marquette. The wine smelled tart with chocolate, which Neil accurately described as cordial cherries! The wine was thick, smooth and chocolatey. Neil found it to taste like a dark red jolly rancher and he wanted to pair it with chocolate mousse. This sounds like another treat for us to bring on Christmas Eve.

These wines were such a great sampling of reds, whites, blends, bubbles and sweet wines. We were really happy that Beth and Dwaine brought us out to their happy place! 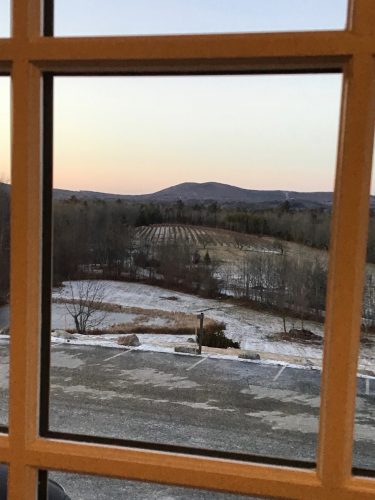 Fast forwarding just a couple weeks or so. We cracked open our sweet wines on Christmas Eve with my family. The Marquette was still filled with chocolate and berries and won votes from Neil and my brother Tom. My brother Vin thought the C’est de l’Or was pretty strong. I enjoyed its nutty aromas, fortified and tangy flavor. We don’t drink sweet wines often but it’s always nice to share some around the holidays! 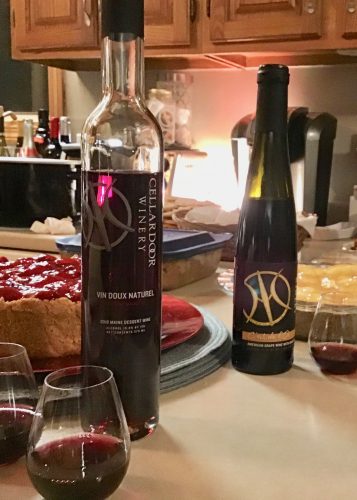 And if you’re curious, with the current state of the world, Cellar Door Winery got delayed opening back up for the season but they’ve been hosting guests for about 6 weeks now. They’ve set up outdoor tastings with preset flights or glasses of wine. I’m going to guess that Beth and Dwaine have probably been back for one of these! Contact the winery for a reservation on an upcoming weekend if you are in the area. 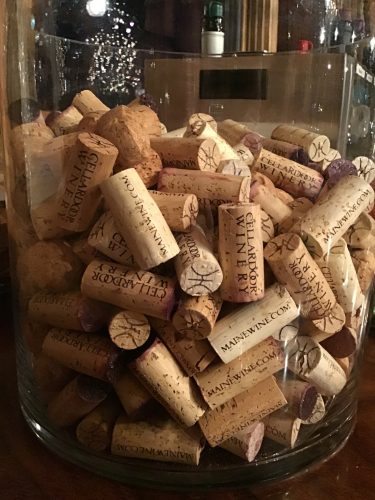 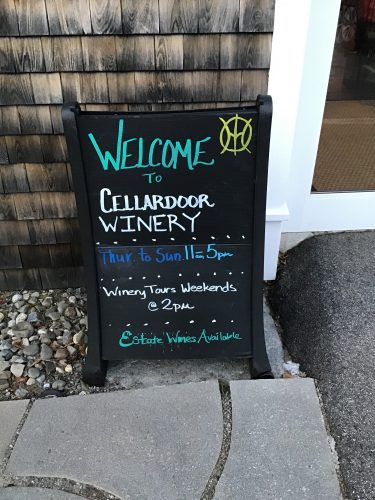