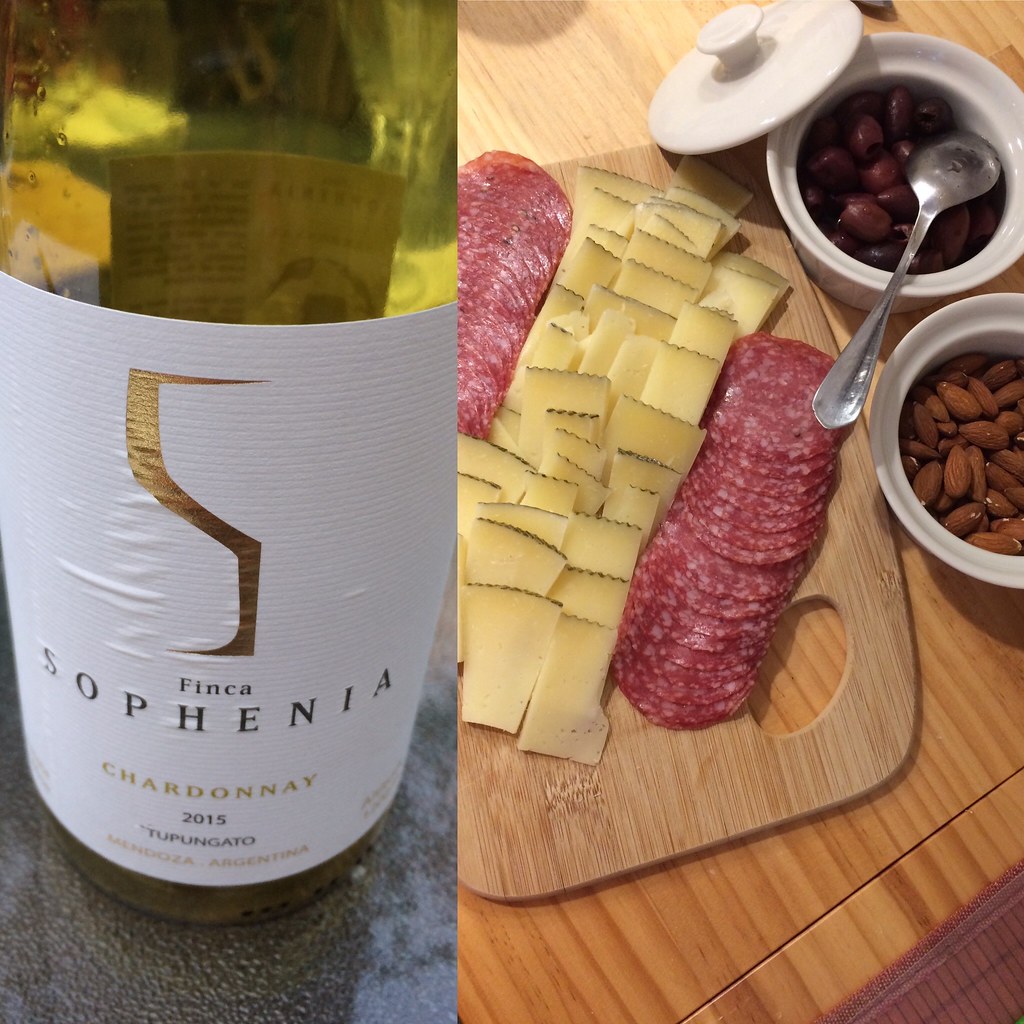 This Chardon-May entry features a Chardonnay from Argentina and a cheese from Spain. We found this wine, as well as the Australian Chardonnay from our last entry at Wine Authorities. Also similar to the previous entry, the cheese is from Whole Foods. I love cheese and they have such a terrific selection of cheeses from around the world there! In order to celebrate WineAndCheeseFriday, we brought in guest tasters, Jo and Francis, our landlords in Durham, NC. They both enjoy wine and figured they’d give wine and cheese pairing with us a try. I didn’t realize Jo is usually an AnythingButChardonnay kind of girl when we invited them up so we’ll see how it goes.

After pouring their wine, I let them know it was a Chardonnay as part of our Chardon-May series and this is when I found out that Jo doesn’t usually like Chardonnay. She said it’s because she’s come across a lot of sweeter Chardonnays and that’s not her thing. We gave Jo and Francis a crash course in wine tasting before we got started: suggesting that they swirl their wines in order to release the aromas, then after sniffing their wine, take a small sip to try to figure out the wine flavors. And in an attempt to not scare them away, I told them it’s ok if they tell me “it smells or tastes like wine.”

Jo got a bit nervous when she described the wine as having “nice fumes” but she was really into the wine tasting. She said that some of the wines she’s tasted didn’t have much of an aroma but she liked that this one did. Francis thought this wine reminded him of Retsina, a greek wine they had tried before.* Neil picked up flavors of butter, a little citrus and melon. Jo said that she noticed more specifically the green rind of the melon. When I swirled the wine to find aromas, I considered this a light wine that smelled like fruit. Jo also picked up a bit of citrus. I identified flavors of spice, fruit and a buttery flavor. I thought it was really good and we got so caught up enjoying the wine, we totally forgot to take a picture of the bottle with wine in it. That’s definitely a sign that we liked it, even Jo who was pleasantly surprised by this Chardonnay.

At first, we weren’t sure what type of cheese to pair with this South American wine. Then when we were at Whole Foods, we were told that the Campo de Montalban was made of cow, goat and sheep’s milk and we were sold. It’s not all that often that you find a cheese made from 3 milks. We also learned that this cheese is aged similar to Manchego, in a basket. Can you see the similar ridges on the rind? I know, I forgot to take a picture of the whole wedge of cheese, too. Guess I was really excited about sharing wine and cheese with new friends.

Now onto the cheese tasting. We’ve mentioned before that when tasting a hard cheese, it’s important to taste a thin slice of cheese in order to fully experience the flavors. That must be why I didn’t take the photo because I was really concentrating on getting those perfect slices to showcase our cheese. Another important part of cheese tasting is making sure the cheese is at room temperature. Jo observed that although we were sitting outside in 80 degree temperatures, the cheese wasn’t too soft. And Francis said it had a good texture and feel when we ate it.

I picked up salt and butter aromas and Neil thought it was just the right amount of salt. Jo said mmm, and thought it was pretty mild and not sharp. She also made note that although it was a goat milk cheese it didn’t have that goat funk when you exhale. I think Jo might have been a wine and cheese expert in disguise. She described the flavor of the cheese to be pleasantly sour. I thought it was tangy and funky with milk flavors. Just before we finished up with our cheese tasting notes, Jo also picked up an aroma of walnuts. I loved that there was lots of flavor and Francis said it was “Great!”. I’d say we all concur.

Before we paired the wine and cheese, we let them know that our goal in pairings is to see if any new flavors appear or if the wine or cheese really change or stand out. I noticed the cheese lost its flavor for the pairing and the wine changed to be fruity with a spicy finish. Francis noticed the opposite of me, he thought the cheese became more intense. Neil and Jo found other things happening. Neil thought the pairing highlighted the best parts of the wine and the cheese but no new flavors appeared. Jo was surprised by the fact that some of the flavors that had dissipated in the wine seemed to come back once she paired the chardonnay with the cheese. She thought it was pretty cool that the wine and cheese got renewed by pairing them! Another thing that she never realized was that in a crowd of people, everyone would have such different experiences. Isn’t pairing wine and cheese awesome!

In the photo you will also see that we had salami, almonds and olives on our cheese board. These are some of my favorite things to have alongside wine and cheese. We didn’t really pair any of these things specifically with the wine or cheese, but Jo did suggest that the cheese paired nicely with the almonds and I’d agree. These items helped us have a little more to munch on while eating a whole wedge of cheese and drinking a bottle of wine. What a fun night of pairing wine and cheese with new friends. Check back next week to find out which one of the Chardon-May pairings was our favorite!

*I’d never heard of Retsina, so I decided to hit the web. And as is par for the course with my wine research, Wine Folly had an article to teach me all about it. She’s such a terrific resource!