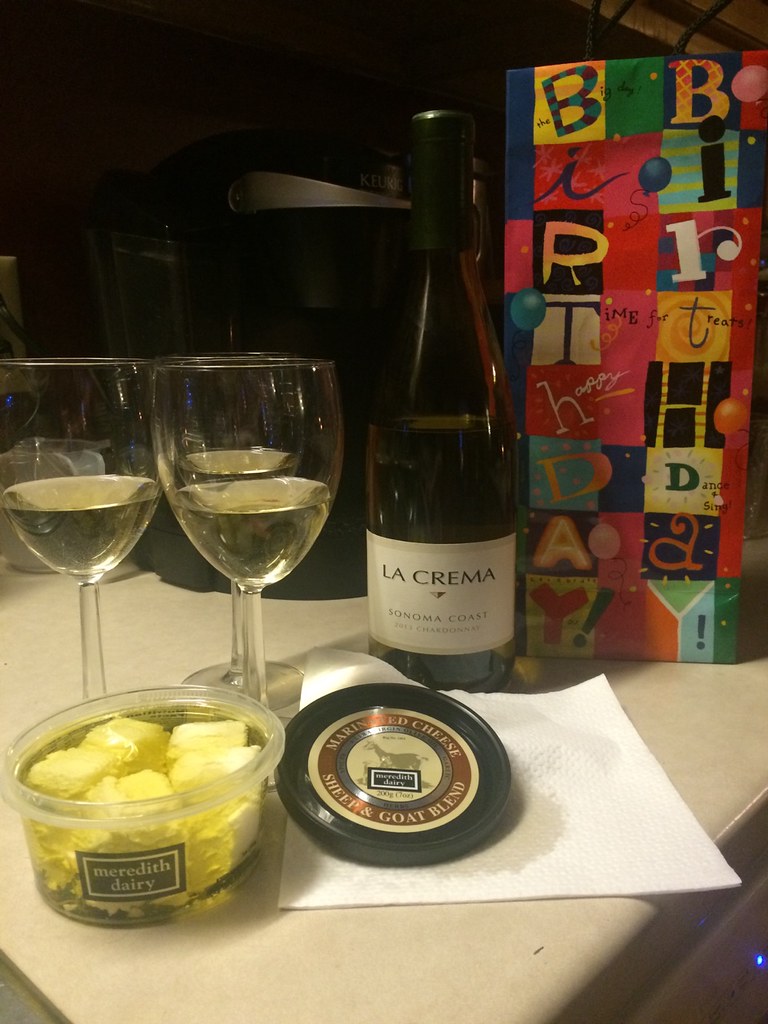 During our trip to Massachusetts, I celebrated my birthday. The Wine And Cheese pairing for this week was a gift from my brother Vinny’s family. The wine was a familiar California brand but the cheese was something out of the ordinary, packaged in a container, filled with olive oil. Since both products were liquid, and we only had carry-on suitcases for the airplane, we continued the celebrating with Vinny and his bride, Koren. I will say, I was pretty impressed with my brother’s choice for the pairing, having a feeling that the Chardonnay would go well with a soft goat cheese.

We told Vinny the procedure that we follow when pairing wines and cheeses, being the nerds that we are, before we began. He swirled the wine and we asked him if he could identify any specific aromas or if it just “smelled like wine?” He decided Koren would be better at that task, so he put her on the spot. She gladly accepted the challenge and said it smelled familiar, maybe floral and a little sweet. She thought it would be a wine she’d enjoy. I found mineral aromas and described it as “ kind of clean.” Neil noticed both citrus and butter with a hint of cat pee.

Once we sipped the wines the excitement happened. Vinny wasn’t sure of any distinct flavors but he thought the wine was smooth and easy. I explained to him that white wines, aged in oak, undergo a chemical reaction that creates a compound that reminds people of butter and would contribute to the smooth texture. Well that was all he needed! Then he sipped the wine again and exclaimed, “It does taste like butter, like I’m eating a spoon full of butter!” Needless to say, he was sold! Neil and I agreed with the butter but added that there was also toast in the finish as well as a citrus flavor that was crisp.

We were very curious to taste this sheep and goat blend that looked like marshmallows floating in olive oil. We could see the herbs and peppercorns and wondered how much they would influence the cheese? I found this cheese to smell like garlic salad dressing while Vinny said it reminded him of “the aroma inside of grandma’s oven.” The herbs and garlic definitely played a part in the flavor of the cheese. Neil said the flavor and aromas were the same and he noticed citrus, olive oil, and the herbs. He was also able to identify the goat and sheep flavors but I didn’t notice the sheep, only the goat’s milk. Vinny and I both made note of the “italian seasoning” flavor, which reminded him of a soft breadstick. I could taste rosemary flavor and also picked up some citrus, perhaps from the olive oil. The peppercorns didn’t seem to influence the cheese flavor but when you ate a whole one by mistake, they were pretty strong. Overall a very flavorful cheese with tasty herbs but too many peppercorns.

Since the cheese coated the tongue nicely we were interested in how the pairing would taste. Neil found the initial flavors to be magnified, the citrus increased and then he noticed an intense toasted butter flavor. Vinny and I both tasted more garlic due the pairing but I also found the butter to increase and then the wine became lighter. Vinny felt the pairing made the wine more bitter but he was pretty impressed with the smooth wine and smooth cheese. I preferred the wine and cheese individually, where Neil said it was a good pairing. What a fun time sharing WineAndCheeseFriday with family and trying out such a different cheese!