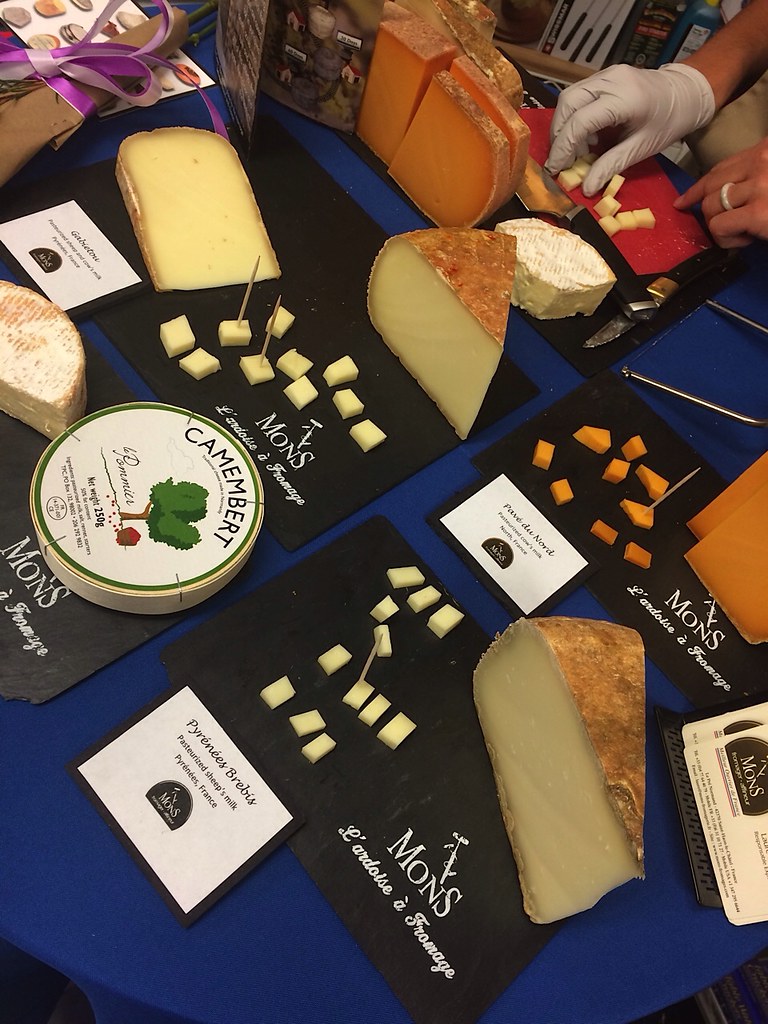 When we attended the Cheese Plus tasting during The Fancy Food show weekend, last year, we had such a wonderful time! We learned about cheeses from all over the world and made some great connections. We knew the event was coming soon so we marked our calendars once we received this year’s invite from Cheese Plus, http://cheeseplus.com. Due to our schedules, Neil and I planned to attend on different days. I will be writing about Friday and he will cover Saturday’s vendors.

It was exciting to see some familiar faces when I arrived. I met a few of the vendors at last year’s event but who can resist trying all their cheeses again?

My first stop was Mons Fromager Affineur, http://mons-fromages.com, who works with French cheese makers and then ages and distributes the cheese. One of their cheese caves was a former railway tunnel and a couple of the cheeses she was sampling, were from here.

I began with Gabietou, a sheep and cow’s milk cheese invented by a guy from Burgundy. I immediately thought it might pair with a Chardonnay. It was soft, creamy, a little tangy, and had a nice flavor and texture. The Pyrenees brebis was not as creamy, a little heavier, and still had the sheep aftertaste. My third cheese, Pave du nord, reminded me of a funky cheddar. Finally the Camembert had a tart, stinky aroma and a funk that you feel in your nose, all good characteristics of cheese!

The next vendor was a change of pace, Manicaretti Italian Importers, http://www.manicaretti.com/pasta/pasta-shapes/small-pasta/item/fregola-sarda?category_id=245. They were serving fregola sarda, a small round pasta from Sardinia, mixed with olive oil, anchovy extract, sundried tomatoes, and baby kale. The representative told me, this distant relative of couscous, is made from Durham wheat and can be a versatile pasta used in soup, with seafood or in paella. It tasted hearty and absorbed the flavor of the olive oil nicely.

The next booth was Rogue Creamery from Central Point, Oregon, http://www.roguecreamery.com/store/. Rogue was the only cheese producer at the event. Their dairy farm is 20 miles from the creamery and they’ve been making cheese since the 1930s.

They only had 2 cheeses to sample; Rogue River Blue and Smokey Blue. The Rogue River Blue is usually released in the autumn and is wrapped in Syrah grape leaves that have been soaked in pear brandy. The cheese is aged for a year, made from raw milk and had a sweet, soft, creamy flavor. Delicious! The other cheese, Smokey Blue, is a good one for all you bacon lovers out there. It is aged over hazelnut shells, is soft and smooth and tastes like smoked meats.

Columbia Cheese, http://www.columbiacheese.com/#/home, is another vendor we met last year, bringing cheeses from Germany and Switzerland. There were four cheeses to try and the spelling is approximate on all of them. Regardless of how they are spelled, they were tasty!

We began with another blue cheese, Chiriboga blue, which was soft, salty and slightly strong. The second one, Sternschnuppe, means shooting star and is prepared with an herbal rinse. You could definitely taste the herbs and the cheese seemed light due to the tiny holes. I really liked this one so I’ll head back to Cheese Plus to get some for a future WineAndCheeseFriday. The next one is a cheese similar to Appenzeller but with a few adjustments. The challerhocker, was rich but hard to describe. The flavor was salty with a hint of sweetness and smelled stronger than it tasted. The final cheese, Limburger, is well known for it’s noxious aroma, but I did enjoy it. This cheese smelled smoky, tasted tangy and had a texture that reminded me of jelly.

The remaining vendor, Rodolphe le meunier,http://www.rodolphelemeunier.com/, was a French cheesemonger. My senses were becoming overwhelmed by this time but I managed to taste the final three cheeses. Dame de at Laurent, is a cheese similar to Mont d’Or, and it was soft, tart, and smooth. The next cheese, Jeune autize, was my favorite. It is made from goat cheese, and was soft with a medium texture and salty rind. I finished the tasting with the Tome brûlée, a little harder, dry cheese that had a mild flavor.

By the end of the evening my tongue was coated with milk, salt and tasty bacteria and I felt like I had cheese emanating from every pore. It was another great night at Cheese Plus and I look forward to trying some of these new gems with wine! Thanks to Ray Bair for throwing this event featuring the Fancy Food Show vendors!