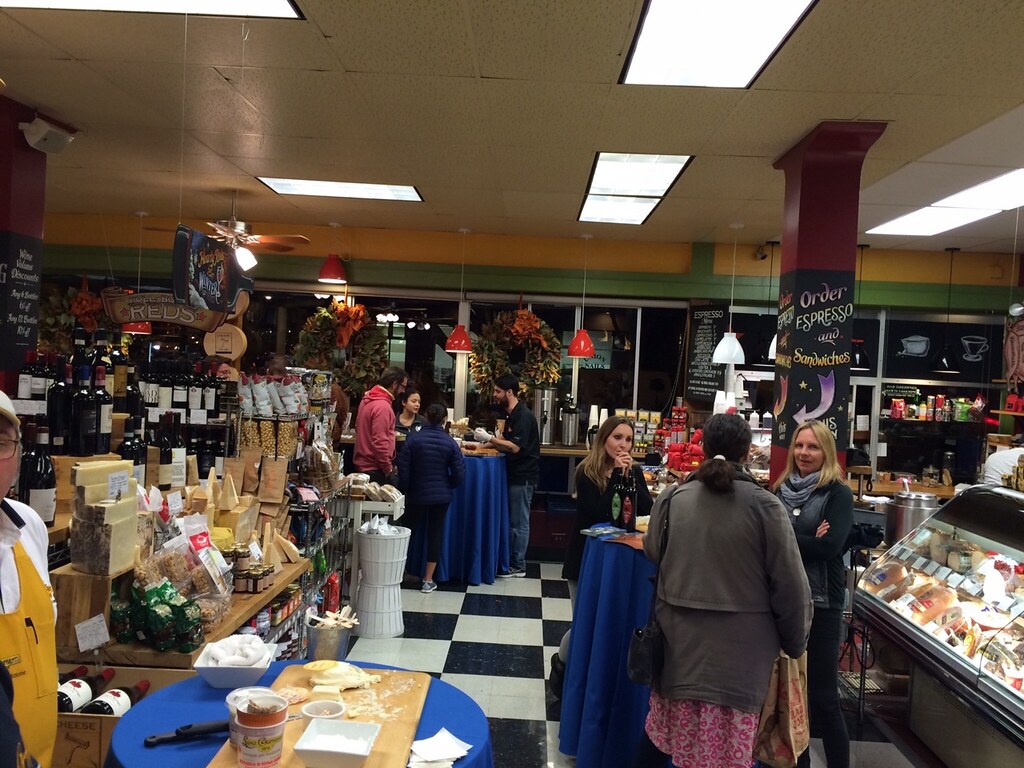 We were both able to attend the second night of the Cheese Plus event on Saturday. It was a great time, and some delicious cheeses were sampled and purchased.

We started with the Il Forteto brand cheeses, http://www.forteto.it/web/ita/. First up was a truffle cheese made from sheep’s milk. This fresh pecorino was flavorful, soft, and yummy with the truffle flavor shining through. The second was the same cheese, except it was aged for four months. This one had a stronger milk flavor and also a good truffle taste. Both of these cheeses are made in Tuscany.

Next up, we tasted three different cheeses from Forever Cheese, http://forevercheese.com, which specializes in importing cheeses from Spain and Italy. The Sapore del Piave is a 16-month aged cow milk cheese that was dry and nutty, but also a bit bitter. A good red wine would pair well with this one. The Il Vegetale is a goat cheese made from vegetable rennet. This one was yummy, both salty and dry, and was making its debut in San Francisco today. I would pair a medium red wine with this cheese. The Puigpedros cheese is made from cow milk, and it was pungent and strong with a soft texture. This would go very well with a white wine.

We then moved on to the Rogers Collection, http://therogerscollection.com First taste was a goat cheese named Veigardte, which had a rind coated in ash. The cheese was soft and mild, and quite yummy. We followed that with a Gorgonzola Dolce that was very flavorful and its flavor effect reminded of sweet and sour sauce (not the taste itself, of course) with the mixing of two opposing forces. It was deliciously mild, and I could have eaten more quite easily.

Our next visit was with the folks from Quality Cheese, providing a selection of cheeses from Switzerland. (http://www.qualitycheese.net) Caroline Hostettler, the US importer and Ueli Moser, head cheesemaker for Moser, http://www.moser-cheese.ch, were both there to discuss the cheeses. Ueli focuses on French-inspired soft cheeses over traditional Swiss Alpine ones. Our first taste was a Cru Blanc that was milky and creamy, with a light funk. Very yummy! We then had the Brick Brie, which was uniquely in the shape of a brick. This was a medium-firm Brie that had a classic taste and was quite yummy. Next up was the Aux Noix, which was filled with solid bits of walnuts in a medium texture, mild cheese. This was quite amazing. Finally, we finished off with the Mostardo, a dijon-mustard filled cheese. It was sliced in half height-wise, filled with mustard, then put back together like a sandwich. Super flavorful, tasty and yummy!

Finally, we got to hang out with our friends from Luigi Guffanti, Davide and Federico. Luigi Guffanti owns the cheese cave we were fortunate to tour in Arona, Italy, back in the spring of 2014 (http://mferraro73.tumblr.com/post/82455563549/wine-and-cheese-friday-a-trip-to-a-cheese-cave). At this event, we were able to taste the Water Buffalo Mozzarella, the Robiola Due Latti (two milks), and the Robiola Tre Latti (three milks). The mozzarella was light, mild, and super soft to the point of melting at room temperature. So good! The Due Latti is made from Italian Sheep and Cow milks in the Lombardi Region. This is a medium soft cheese, mild and super yummy. This cheese would go great with some Pinot Noir. Finally, we tasted the Tre Latti, which is milky and yummy, and served best on a spoon. This cheese is so delicious, and made from all Italian milk as well. There is something so special about Guffanti’s cheeses, and there are many regulations that must be followed to create the quality Italian cheese that they do.

Maria and I had an awesome time at this event, and enjoyed so many great cheeses. Fine cheese is like fine wine, a level above the rest.

If you are interested in seeing which vendors were there on the previous night, here is the link to our other post (http://mferraro73.tumblr.com/post/108328024653/cheese-plus-intimate-and-exclusive-tasting-friday)