Cheese Tasting at Cheese Plus 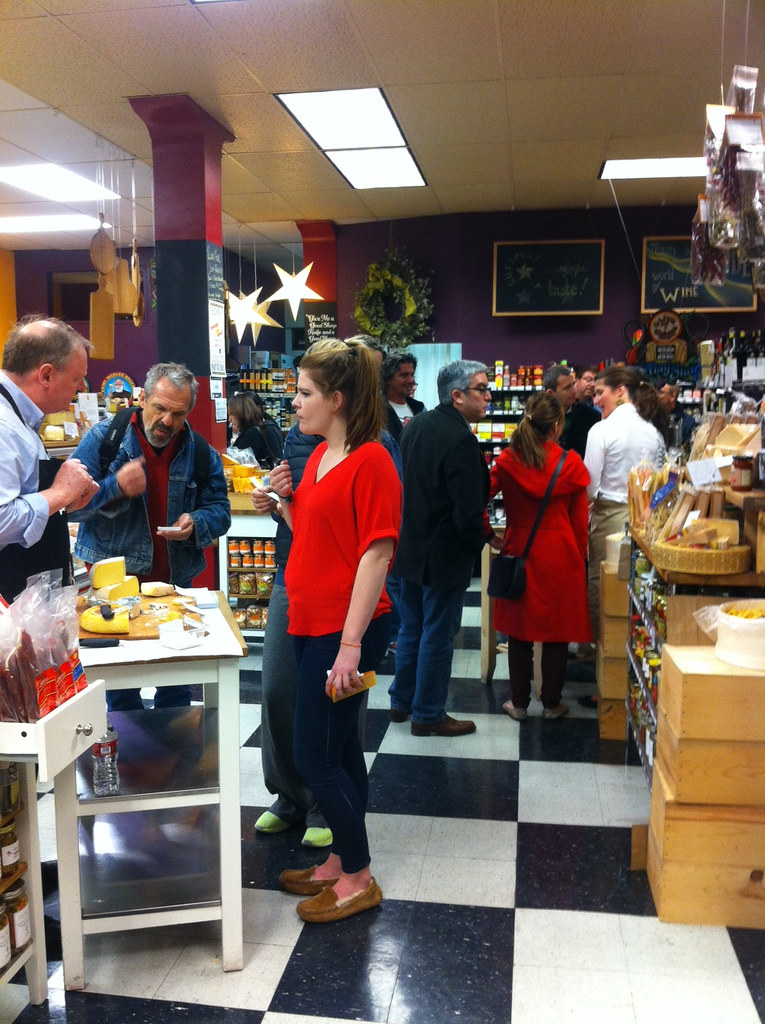 We heard about a public cheese tasting and couldn’t wait to attend. The event took place at Cheese Plus, an upscale specialty store, who has cheese plus. (http://cheeseplus.com/) The tasting event featured cheese producers who were all in town for the Fancy Food Show.

As we entered the store a couple said they felt like they were touring Europe. I’d say that described it perfectly. There was cheese from Italy, France, Belgium, Germany and Oregon. So more like Europe plus. Everyone was so friendly, knowledgable and willing to share samples and information.

Herve Mons cheese was there for France. We have tried this brand of cheese before but I don’t think it was any of these. There was a goat’s milk cheese, Ovalie Cendree, a sheep’s milk cheese, Pyrenees Brebis, and a cow’s milk cheese, Camembert Le Pommier. The Ovalie Cendree cheese had an ash rind, medium texture, was creamy and initially funky. The Pyrenees Brebis looked like the Tomme cheese we had in a previous Wine And Cheese Friday. It had a medium texture and a striking flavor of pineapple. Very interesting! The final French cheese was Camembert Le Pommier which had a nice soft texture with an earthy, funky flavor.

The next company was simply called Cheese Made in Belgium. The first cheese St. Maure, was a goat’s milk cheese that was clean, light & fresh. My favorite one of the grouping. The next cheese, Charmoix, Charming Cow, was a cow’s milk cheese with a high amount of whey. This cheese was acidic, strong, intense and nutty with a nice texture. It was recommended to try with an Amber beer. We finished out the Belgian cheeses with Wavremont, made with an organic raw milk in the Trappist style.

Columbia Cheese, was the final European company who brought Bavarian cheeses for all to taste. Gepfeffertes Arschle , peppered ass, was a soft, mild, cheese with peppercorns. Chariboga Blue was fresh, light, salty, soft flavored and buttery. Such a different type of blue cheese than we’ve had before. Neil said his favorite cheese of the day was Hubaner, a semi-hard, slightly salty cheese that left a milky residue on your palate. It was suggested to try with a sweet Riesling. We finished out the bavarian cheeses with a Lindburger. It was funky and kind of reminded me of a fermented flavor. There is a shop in London where they wash the rind of Lindburger with Gewertzaminer wine. Sounds like one to keep our eye out for!

Before our cheese tour was over we tried the cheeses from Rogue Creamery in Oregon. They had 3 blue cheeses that all tasted very different from each other. Rogue River Blue, made from raw milk, was wrapped in Syrah grape leaves. It was soft and sweet with a pineapple flavor. Brutal Blue also made from raw milk was harder than the first one and creamy. Floranelle uses animal rennet, where the other 2 cheeses use vegetable rennet. It was hearty, salty, creamy, funky&sweet, hot& spicy. What a cheese to end with!

At the end of the event my mouth was completely saturated with cheese. It made me happy. What a great introduction to cheese tasting! We had such a good time that we are inspired to check out the Sonoma Cheese Trail or to visit our local cheese school. We can’t wait!