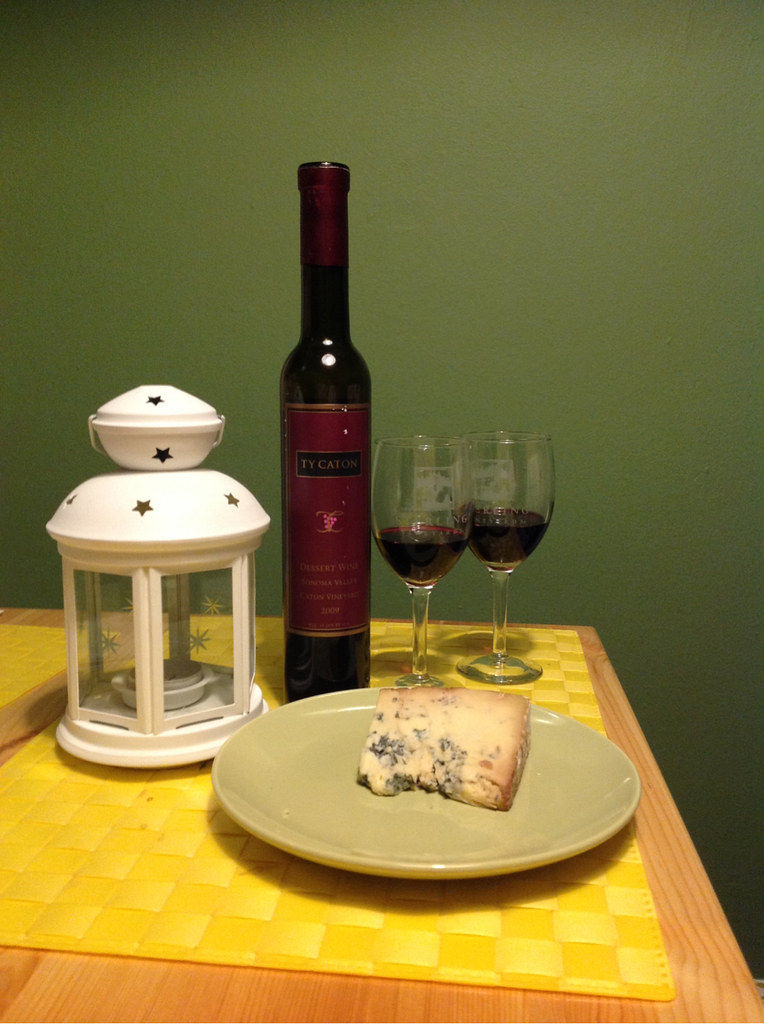 We were excited to try another category of wine, so on our trip to Kenwood, we purchased this dessert wine. (https://wineandcheesefriday.com/trip-to-kenwood/). It is made from 100% Petite Sirah grapes and it passed the test during our wine tasting that day in Kenwood. Lets see how it goes with cheese?

Since its a dessert wine, it goes without saying that it was thick and sweet. I initially smelled plum, prunes and alcohol, while Neil picked up plum and cassis aromas along with the reminder of Sherry. We were both in dessert mode when we tasted the wine, I thought of blueberry pie and chocolate and Neil imagined dark chocolate cherry cordials. Neil has tasted some other drinks in the past so it also tasted like a similar flavor to Sherry or Bourbon and he picked up the oak. The alcohol was kind of hard to miss but it was 19.16% alcohol, after all!

The cheese was a blue Stilton, which didn’t look like other Stilton’s we’ve had. I found it to be creamy, tangy, salty and silky. It seemed like it would be stinky by its appearance but it wasn’t. Neil said it was soft and briny, with a strong funky flavor, like a punch in the mouth. We both really liked it! It reminded me quite a bit of the Bailey Hazen blue cheese we had during a past WineAndCheeseFriday. https://wineandcheesefriday.com/viognier-and-bailey-hazen-blue-cheese/. We had a lemon zest Stilton during our Labor Day trip to Lake County and this cheese seemed completely different. I guess there are many types of Stilton cheese. More for us to explore in future weeks!

During the Dessert wine and Stilton pairing Neil found the wine to intensify the saltiness and tone down the funk of the cheese. I noticed less fruit in the wine but a smoother flavor. We both agreed that the alcohol seemed to increase as well, with it moving more toward bourbon flavors. I don’t think either of us would want to have a port-style wine regularly but it was nice to have around the Holidays.