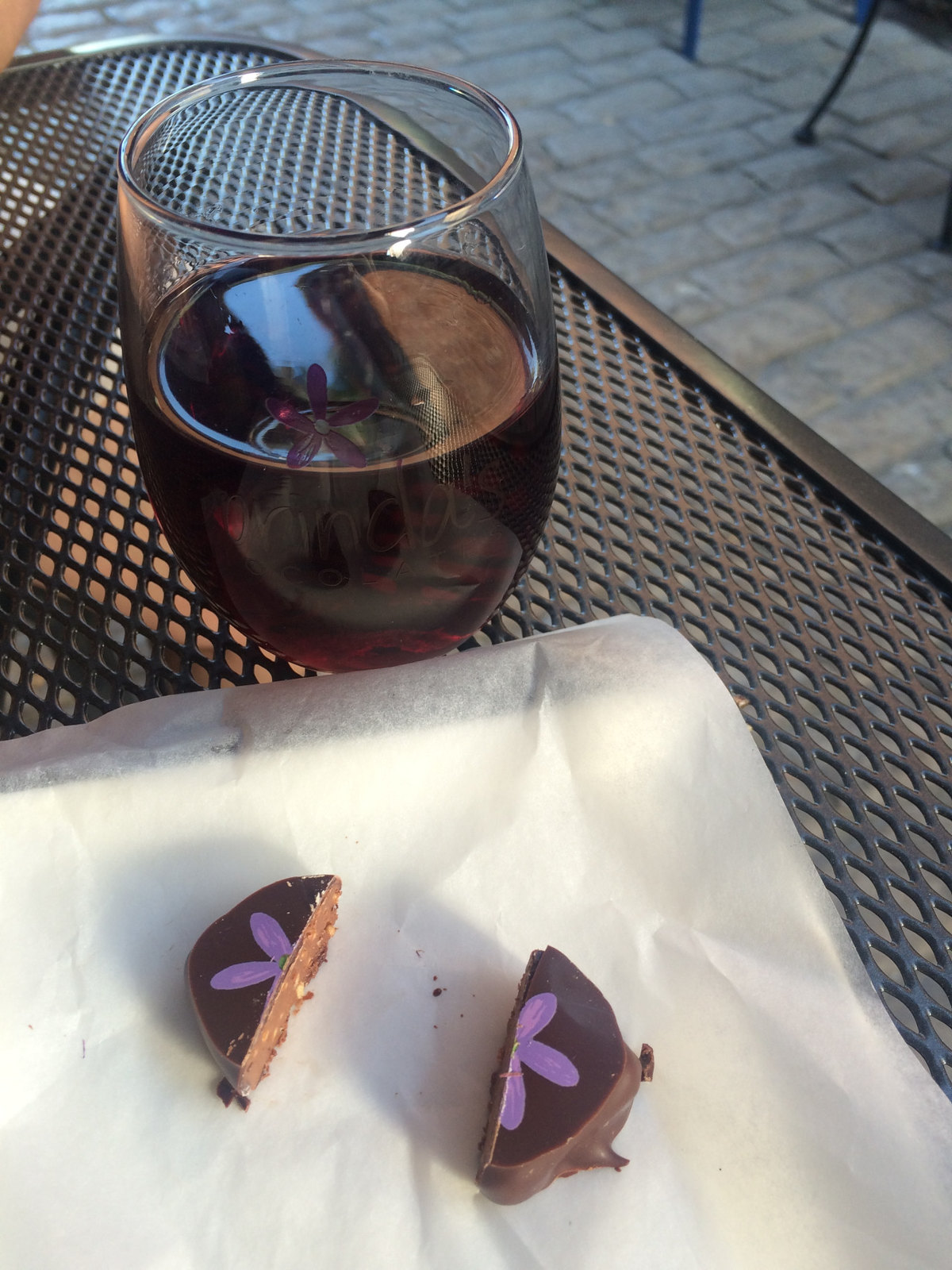 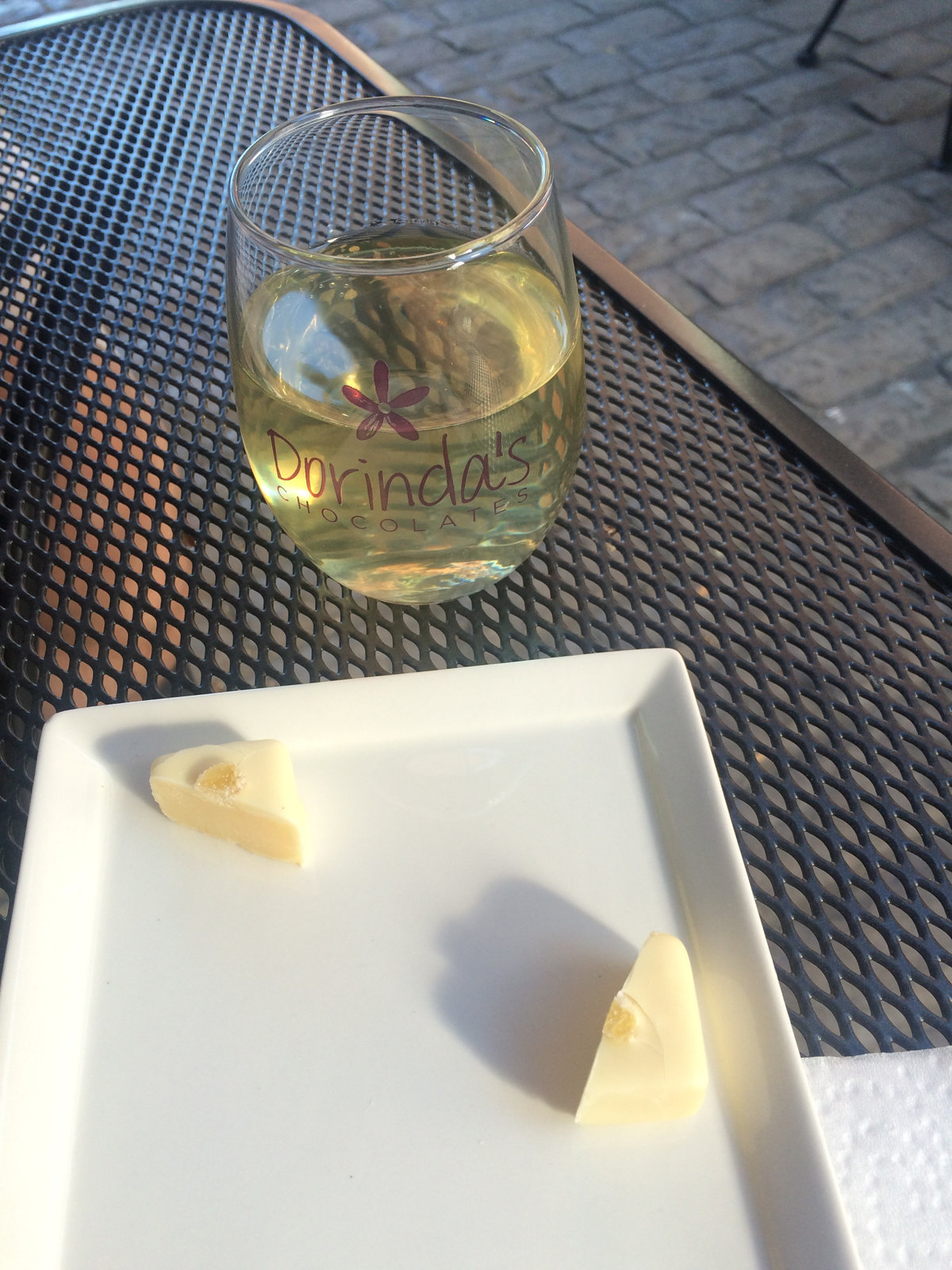 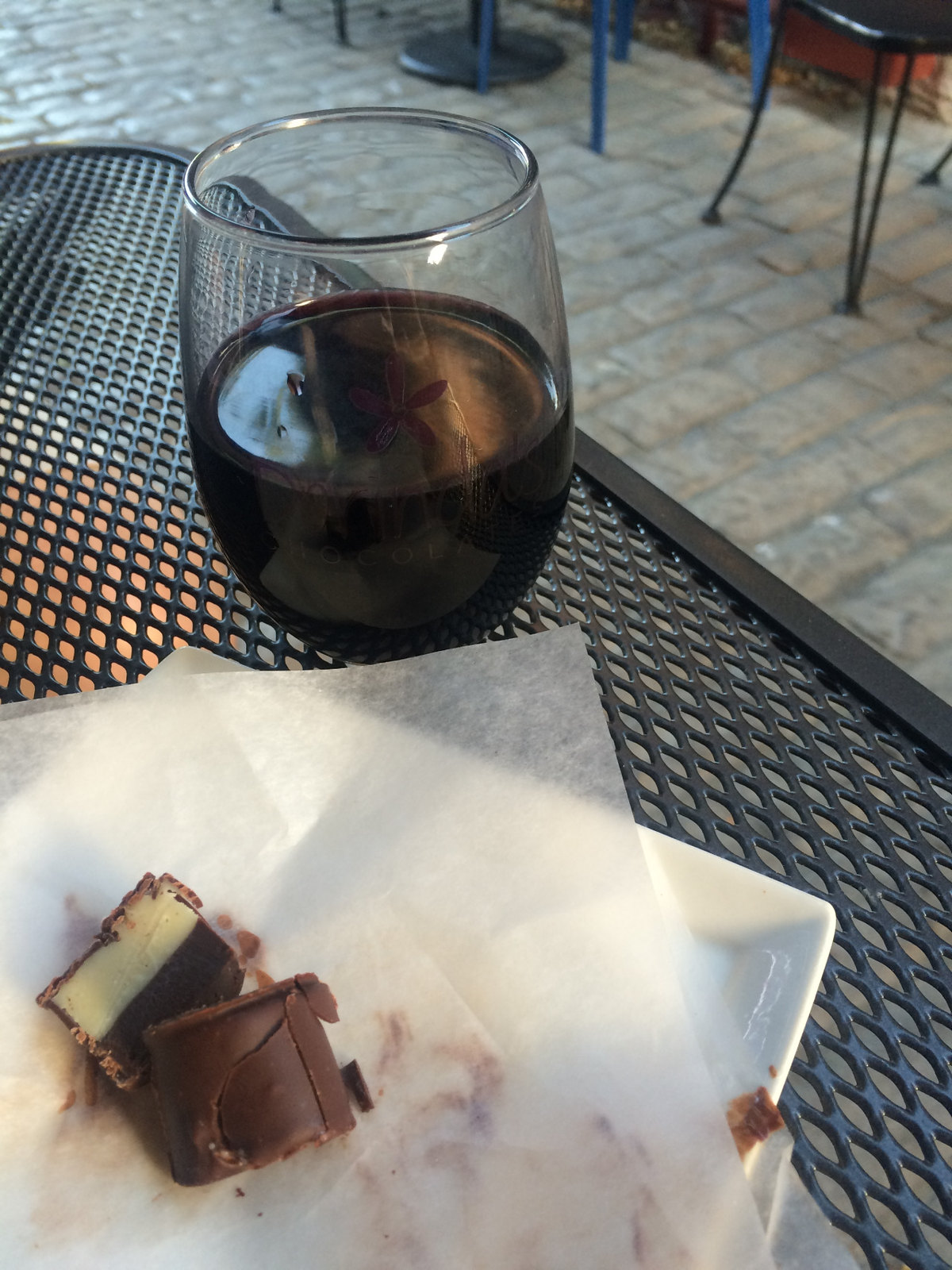 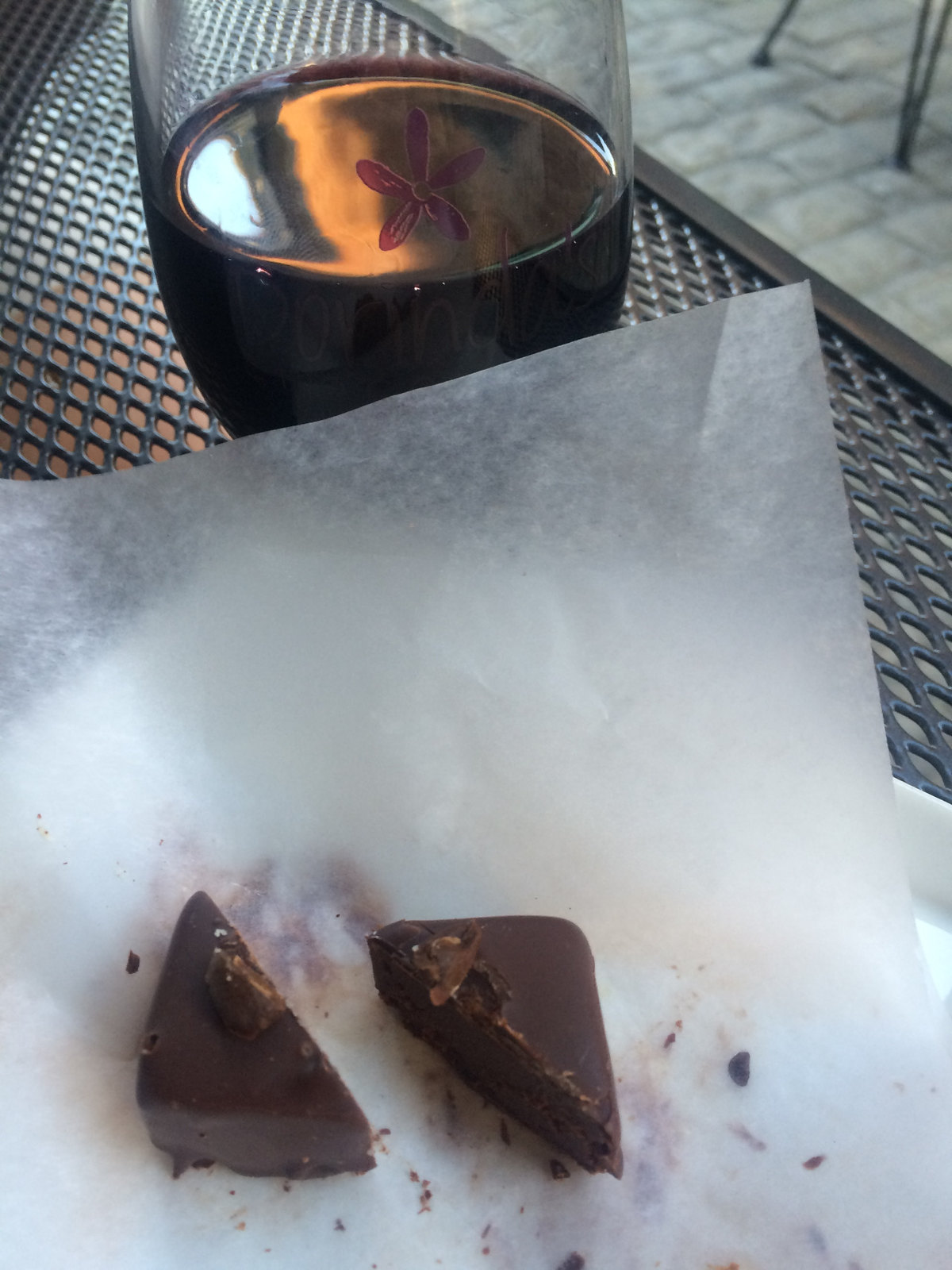 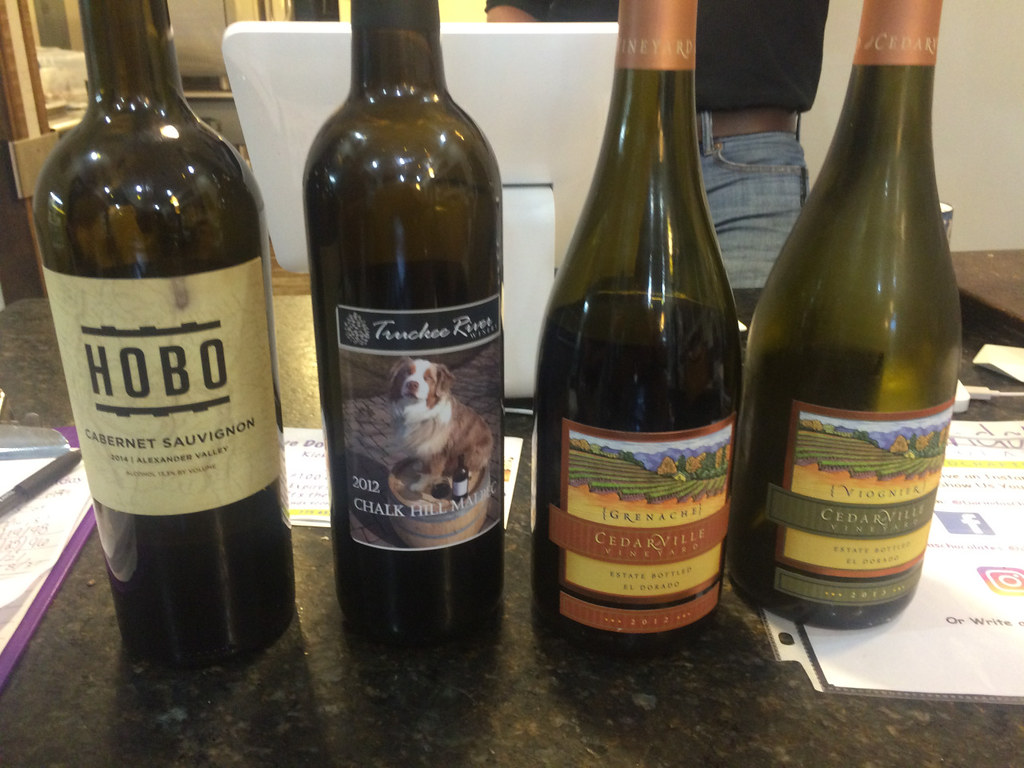 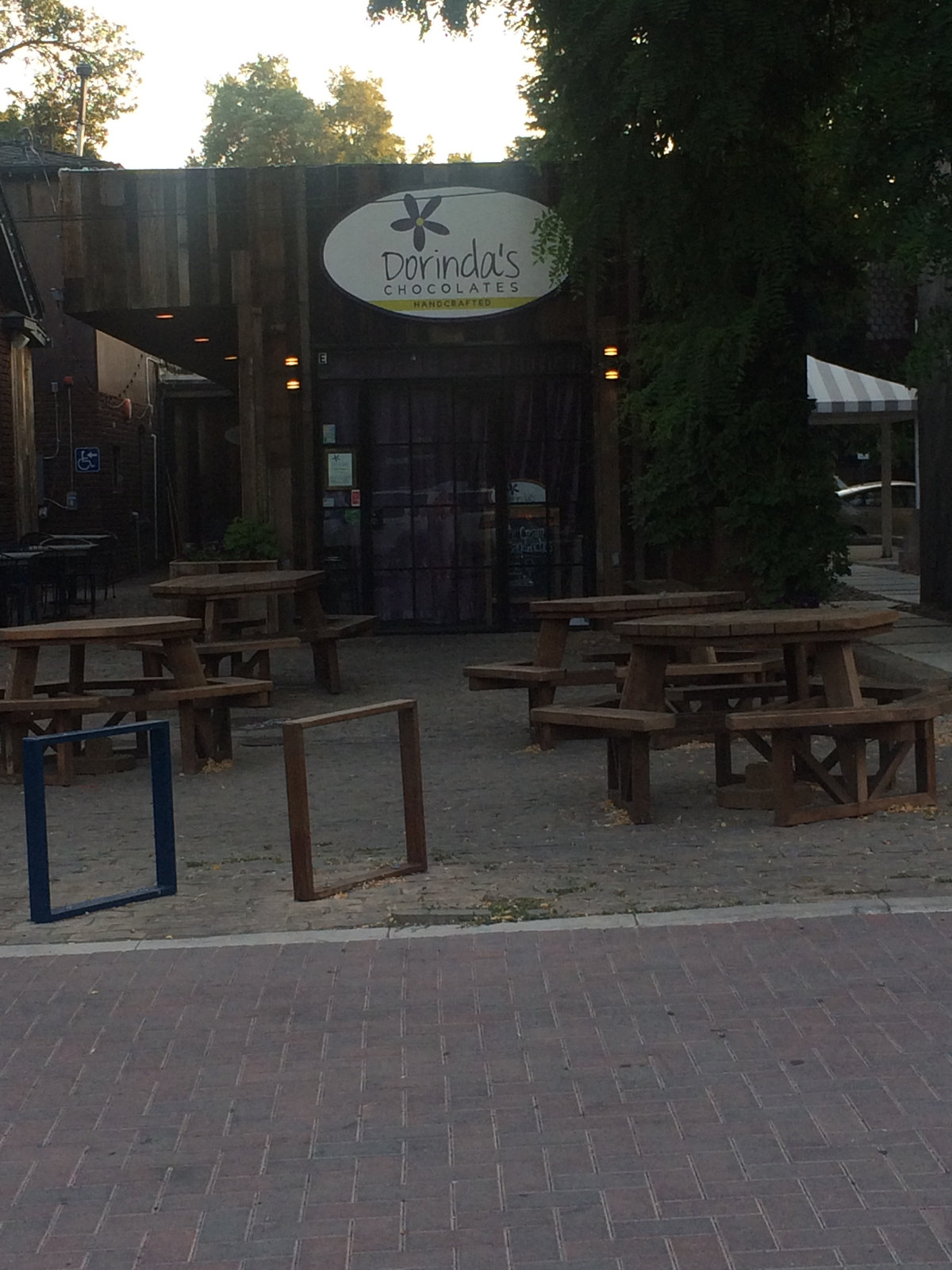 Last week we told you that we had tons of “wine fun” while we were in Reno, so here’s your next entry. Dorinda’s Chocolates (http://dorindaschocolates.com) was next door to Hub, the coffee shop where we spent a bunch of time working in Reno. On our first day there, I was gazing out the window and noticed the menu hanging on the wall for Dorinda’s. There were wine flights and wine and chocolate pairings so obviously I made my way over there pretty quickly. We spoke to Dorinda, the owner, and she let us know that they had a weekly wine and chocolate pairing event on Thursday’s so the plan was set.

We couldn’t wait to go to the event so we trekked over through the evening heat. There were no seats inside so we got set up outside for our pairing. This was our first wine and chocolate event so we were really excited to see what they chose for pairings. And aside from our visit to a chocolate processing plant in Ecuador in February, we really didn’t know the steps involved. Our first pairing was accompanied by an introduction to chocolate making that I will share with all of you. I only caught about half the steps that night so I had to do a little research to get a full grasp but I’m happy I did. Yup, I’m a nerd who loves to learn ?

Dorinda’s purchases their cocoa beans mainly from France and Belgium. Did you know that the cacao tree has big pods that contain 30-50 cacao seeds/cocoa beans? When the pods are harvested the seeds and pulp are scooped out, fermented and dried. Next up the beans are cleaned and roasted which causes them to crack open. Then winnowing happens where the shells are blown away with fans and only the nibs (pure cocoa bean) remain. These nibs are finely ground into cocoa mass which is also called cocoa liquor. The cocoa mass is then put under pressure to separate it into cocoa powder (solids) and cocoa butter (the natural fat from the bean).

All of those steps are relevant because each type of chocolate (dark, milk or white) is made using different ratios of these items. Dark chocolate contains cocoa solids, cocoa butter and some sugar. Milk chocolate uses these same 3 ingredients but also has milk powder. White chocolate is different because it only has cocoa butter, sugar and milk powder, no cocoa solids. Once the type of chocolate is determined, it’s added to a conch which stirs and heats the mixture. Next its brought to a certain temperature, called tempering, and then shaped into pistoles (blocks or drops) that will be delivered to the chocolatier.

Now that you are sufficiently educated, let’s pair some wine and chocolate! We will set up the tasting notes similar to when we pair wine and cheese, with wine notes, chocolate notes and then pairing notes.

Our first pairing, Cedarville Viognier with Lemon Truffle was a white wine and white chocolate pairing. Neil and I both noticed clean, lemon aromas as we swirled the viognier. I found tart, lemon/lime, clean, light flavors that reminded me of a lemon drop candy. Neil thought it was more like creamy lemon but not overly tart and yummy. It was like the lemon version of a creamsicle! A perfect wine for the warm weather.

The truffle contains 0% chocolate, as we learned above, and used lemon zest and lemon essential oil to achieve all that lemon flavor. I described the chocolate as lemon merengue that was so creamy and melty. Neil could smell the lemon and white chocolate aromas and found the flavors to be lemon cream, light and delicious.

During the pairing of viognier and lemon truffle, the wine seemed to smell more clean with a little less lemon but then the oak and butter greatly increased in the flavor. The truffle seemed to taste more like chocolate and the lemon kind of disappeared. When Neil paired them he found the wine to be slightly more tart and the chocolate to be slightly sweeter and creamier. He expected the lemon flavor to go away, as I described, but was surprised that it didn’t dissipate more. I really enjoyed the individual flavors of the wine and truffle and thought it was my favorite pairing due to the drastic changes in both wine and chocolate. Neil thought this was his favorite overall experience but his #2 pairing.

The second pairing (see the first photo) had wine from the same vineyard, Cedarville Grenache with Kracken Hazelnut. I really enjoy grenache wines so I was ready to swirl and sip! This wine had light fruit aromas that seemed like sweet and candied red fruits. Neil noticed berry and light spice aromas and flavors of cherry, cherry cola, cassis, a hint of chocolate and a bite at the back of his throat. There was definitely a hint of chocolate or sweetness and maybe some blueberry flavors.

The truffle is made from 55% cacao, which refers to the percentage of cocoa solid used in this milk chocolate. I thought you could smell the “crunchies” like rice crispies and chocolate but Neil said that was the aroma of hazelnuts, not rice crispies. He thought the flavor was definitely chocolate, hazelnut and creamy with little crunchies. This truffle was super melted by the time I tasted it but there was possible hint of berry. After this one, we figured we should probably not wait too long to taste the chocolates since we were sitting outside in 90º heat.

The third pairing was Truckee River Malbec with Ebony Ivory, which Neil and I were a little hesitant about since neither of us really like Malbec, as a general rule. I swirled the wine and it had intense aromas of dark fruit, and possibly black licorice but then it struck me, prune! Neil was on the same page as me identifying plum aromas, as well as chocolate. The wine was fruity and dry with the same flavors as aromas. I would say this is one of the first Malbec’s that I have really found a noticeable flavor and not just dryness!

This truffle is made from cacao butter with vanilla bean on the ivory side and dark chocolate on the ebony side. Thankfully this truffle was much less melty than the Kracken! Neil noticed the ebony side to smell like cacao and the ivory side to smell like sweet butter. I could tell there were 2 different chocolate aromas but the truffle reminded me of a marshmallow’s aroma and flavor. Neil tasted vanilla bean cream and chocolate and described it as smooth and delicious.

The pairing of malbec and ebony ivory was probably our least favorite. Neil noticed the alcohol and fruit flavor to increase in the wine and the chocolate to become sweeter. I didn’t think there was much of a change in the wine or chocolate. Oh well, at least we got a chance to try the wine and that dark and white chocolate truffle.

We finished out our decadent evening of Wine and Chocolate pairing with Hobo Cabernet Sauvignon and the Hub Espresso truffle. The wine had dark fruit, moderate spice and cassis aromas. Although the wine was dry, it wasn’t nearly as dry as the Malbec. We noticed flavors of berry, cassis, spice and alcohol.

This truffle’s ganache, or filling, contains the ethiopian espresso grounds from Hub, the coffee shop next door, https://www.hubcoffeeroasters.com, 64% dark chocolate, cream and butter. Then it’s dipped in dark chocolate and topped with an espresso bean. Neil could tell he was going to enjoy this truffle being a coffee enthusiast. He identified cacao and coffee aromas and a medium coffee flavor with a slight bitterness. It was very yummy! I smelled chocolate and tasted espresso. The texture seemed thicker, not as creamy, which I enjoyed.

The pairing of cabernet sauvignon and the espresso truffle was Neil’s favorite. He drank his wine by taking little sips and was able to pick out cherry cola flavors. He thought the flavor of coffee increased in the truffle and it was even bigger when he tasted the bean. I noticed more fruit flavor and less dryness in the wine and the chocolate seemed creamier in my first sips but then the next sips were pretty dry.

Thanks to all three guys that helped us that night. We had such a fun experience trying to figure out the flavors of each truffle. Not to mention all that chocolate education. The only thing we’d change is the weather, it was way too hot for wine or chocolate!

Would you like to know a little more about the wines?
Cedarville Vineyard, http://cedarvillevineyard.com, is located in El Dorado county, the same area we recently visited on our way to Yosemite, http://mferraro73.tumblr.com/post/146094751633/madroña-vineyard-wine-tasting-it-was-scheduled We thought it was pretty funny when we saw the Malbec label because we visited Truckee River Winery to play bocce a couple years back (http://mferraro73.tumblr.com/post/92893303638/wine-and-bocce-truckee-river-winery-since-we). Hobo Cabernet Sauvignon, http://www.hobowines.com, is from Alexander Valley, a region located in Sonoma County, CA, one of our favorite wine regions. I guess we chose a good night to attend!