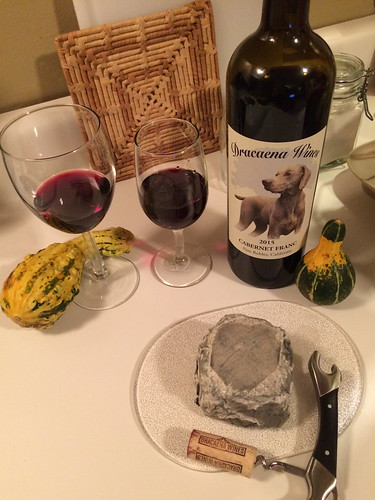 This was the last bottle of 2015 Cabernet Franc by Dracaena Wines, and we got to pair it with some fancy cheese from Vermont! We purchased this bottle of wine direct from Lori during our visit out to Paso Robles back in the summer, . I knew I’d want to find a special cheese to pair with it so I hung on to the bottle for a bit. Since we travel full-time and have no wine cellar, we decided to send it off to my mom and enjoy it in New England in a couple months. Early on in our visit to New England, we planned a trip out to Vermont and we knew we’d find a nice cheese there. We purchased the Lazy Lady Farm duet cheese at our first stop of the day, Grafton Village Store. Grafton, VT not only has a cool cheese shop, there is also a covered bridge, tons of foliage, and an old library. We enjoyed so much wine during the Summertime, that we were happy to have this bottle saved for a later day. Without further ado, the pairing of Dracaena Wines Cabernet Franc and Lazy Lady Farm Duet Cheese. 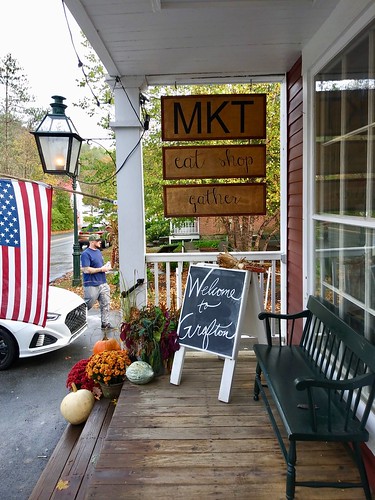 We first tried the Cabernet Franc right in the vineyard where the grapes were grown! What an amazing experience. We began by swirling the glass to open up the wine but still Neil exclaimed “That’s a big wine!” This wine definitely had black fruit aromas, including grapes and blackberries but we could also tell it was dry and herbaceous. We noticed some sensations once we tasted it, it was not only smooth but also warm on my tongue. Neil found it to taste jammy with a spice finish but I thought it was a big, dark berry finish. We both agreed it was a good wine! 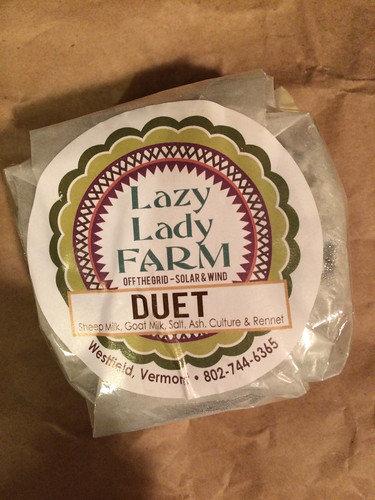 The cheese was oh so funky in the refrigerator! We actually had to double bag it until we were ready to do the pairing. Once we opened up the package for our tasting, we noticed the rind was wrinkly like skin. Neil described the aromas as Super Funk and like a cave but once we cut open the ball of cheese, it smelled so milky. This cheese is called Duet because it’s made from both sheep and goat milk. As you taste the cheese, the second layer comes through and the flavor changes to tart from the ash in the cheese. Neil thought it started a little sweet like the fat in heavy cream but then it changed to a rocky flavor. 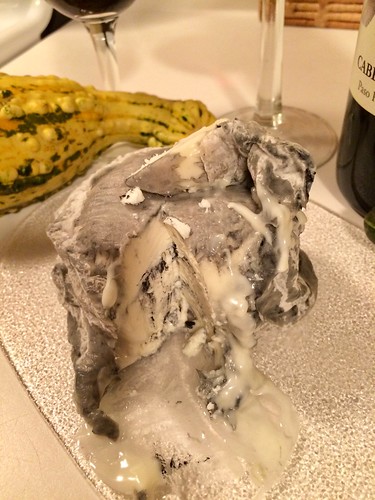 The milk was oozing out and we guessed this could have been the sheep milk since the smooth, thick part seemed like goat’s milk. The texture was the perfect amount of meltiness! The flavor both tingled the tongue and had a rich funk to it. What a flavorful cheese that lingered so nicely. After all this talk about the cheese, I wonder how it will pair with the wine?

The cabernet franc appeared to change once we paired it with the cheese. The wine smelled more fruity, less like dark fruit, and more like red fruits now with grapes and some earth. The flavor of the wine changed too to be more earthy with dark fruit but lighter. Neil agreed with how it changed and called it “brighter”. The cheese changed too! Still smelling milky but the cheese felt thicker with more milk in the flavor and not nearly as funky. Neil also picked up more salt, more goat cheese and more butter in the flavor. It seems the wine and cheese changed each other as well as created more of a balance. What a good pairing and a versatile wine!

Since this pairing took place around Halloween, we decided to pair it with some candy bars, as a bonus pairing. I’ve heard a lot about pairing wine with candy bars but never had a chance to try it. We had caramel Twix, Milky Way and Snickers. My guess was that the caramel would taste good with the wine but not the cookie. Surprisingly the cookie in the Twix really didn’t make much difference. In all three options, the wine became more earthy and the candy seemed soft and smooth. Maybe the oak from the wine softened the candy? I think I’ll stick with pairing wine and cheese, but it was a fun experiment! 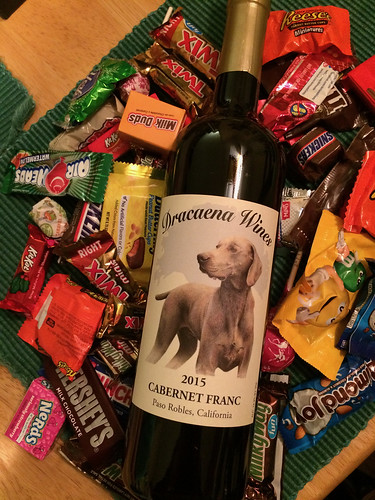