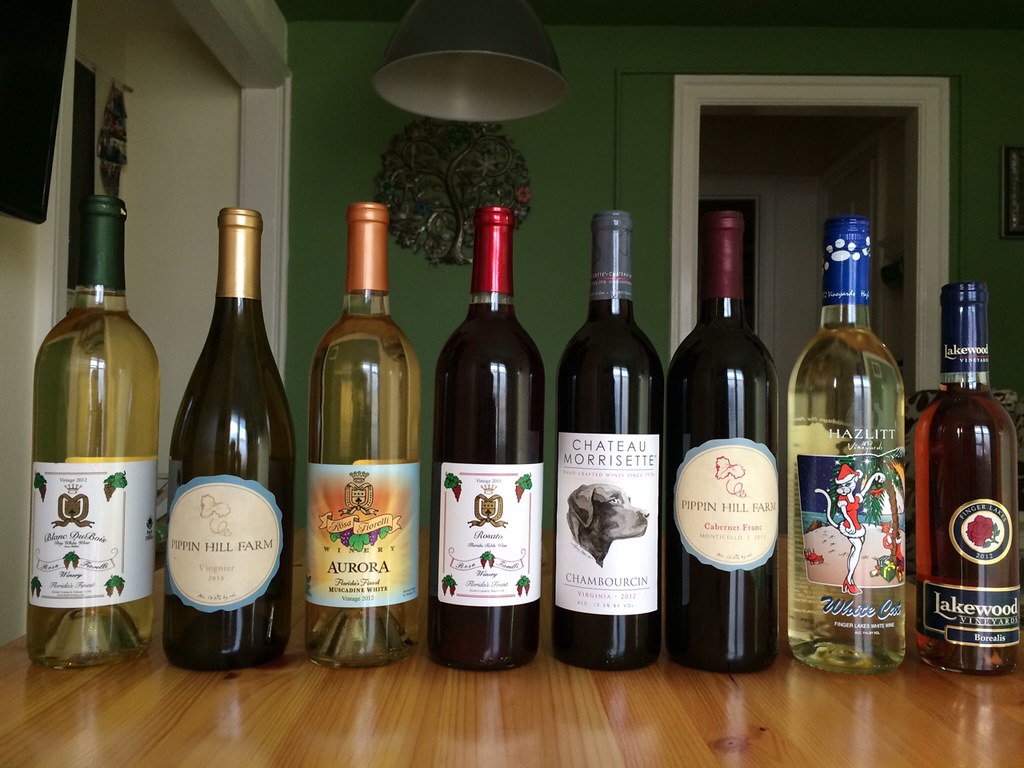 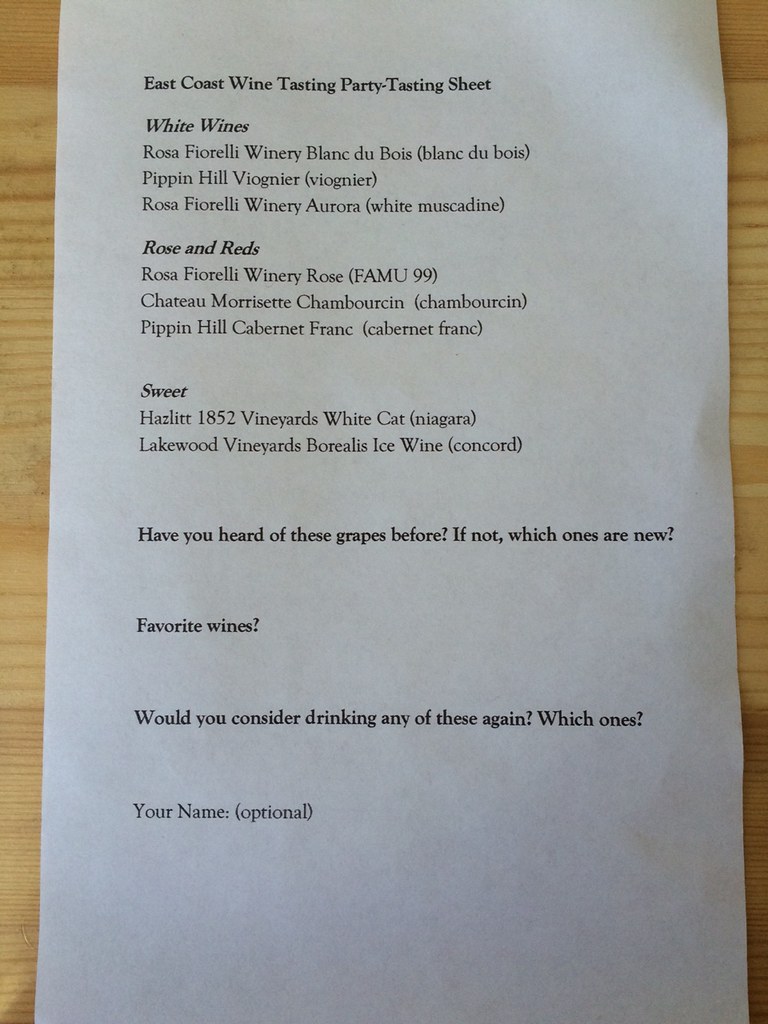 After reading all about the party planning in part one (http://mferraro73.tumblr.com/post/112647446928/east-coast-wine-party-working-in-the-wine-industry) stay tuned for the tasting notes for these East Coast wines.

I was so excited to throw the East Coast Wine Party that I made a tasting sheet for people to fill out their own notes, even including a few extra questions, just to make it a little more interactive.

It was kind of funny because I knew that all the people attending were interested in wine but I wasn’t sure how much they’d be into writing the characteristics of the wines. I left it up to them to decide. Although I told them it was no pressure, I did let them know I’d be creating a blog entry about the party. I was pleasantly surprised that everyone had something to say.

The first wine, a white wine from Florida, uses a hybrid grape called Blanc du Bois. There were a few differing opinions about this wine but the underlying fruit identified was grapefruit. Some people also noticed ham, smoke, a sweetness and petrol. It did make it into the “favorite wines” category and a couple people said they would drink it again, although it wasn’t something they had heard of before.

The next white wine is from Virginia. Viognier is a rhone varietal that just recently started being used in single varietal wines. I had heard that some nice Viogniers were being made in Virginia so I was excited to see how it would be. One person described it as a “nice, light, Viognier”, where someone else thought it was similar to a Chardonnay and another person said it was bold, oaked and mild. Maybe it was having an identity crisis? Regardless of its description, it was one of the top “drink again” wines and also a leader in “favorites.” I was feeling happy about including this wine in the tasting due to it being so well-received.

The second white wine from Florida was up next. This wine uses one of the grapes native to Florida, white muscadine, although some people call it Scuppernong. This grape is more commonly used in jams and jellies, let’s see how the group likes this one as a wine. The two main characteristics identified were sweet and tart. If people had to guess, it was made from Concord grapes, which is funny because that is a grape grown on the East Coast too. Neil did find that this wine has tasted better in the past, which is funny because we shipped this one back in October so it wasn’t on our list as one with a possibility of Bottle Shock. Maybe it was just having a bad day.

Moving into the Rosé and Reds category, we tasted Rosato, a rosé made from a grape developed by Florida A&M University to grow in the Florida climate. We noticed a few different fruit flavors in this wine including pomegranate, blackberry, and dark cherry, although it was noticeably tart/acidic as well. The conversation that sparked more about this wine was what the “A&M” stood for in college names more than if people would drink it again. It’s pretty easy to say that hardly anyone had heard of the grape called FAMU99.

Up next was a grape called Chambourcin, from Virginia. This was one of the only wines I had not heard of so I was especially excited to try it. The specific wine came as a recommendation from a customer at work when I was talking about throwing the East Coast Wine Party. One of the funny things when I researched it is that although it is a French-American hybrid grape grown in the US, the parentage is unknown. The flavors and aromas found in this wine were all over the map ranging from candied roses, sour cream, spice, macintosh apple to strawberries, earthy, citrus, and a good table red. Following suit with myself, it was the wine with the most votes of “I haven’t heard of it!”

Cabernet Franc is another grape that recently started being used in single varietal wines. This bordeaux grape is more typically blended into Cabernet Sauvignon wines. This wine was chosen due to the accolades that Cabernet Francs grown in Virginia have been receiving. From the lack of descriptions of this wine, you would think people weren’t too excited about it, but it was at the top of the list with the viognier, from the same winery, for “will drink again” and noted as a favorite wine, as well.

Only two wines remain and they are both in the “sweet” category. I have tasted a few Pennsylvania wines when I’ve gone back to visit Neil’s relatives so I had an idea of what to expect with the New York wines. I decided to embrace their sweetness and see how they can shine as dessert wines instead of trying to match them with dinner.

The Hazlitt 1852 Vineyards White Cat, which became lovingly referred to as “sexy cat”, is made from Niagara grapes from New York. This grape is considered a poor shipping grape so it is not usually found fresh outside of the regions where it grows. It is also known to most Americans as the source of white grape juice, which someone accurately described it so. Others described it as a playful flavor/aroma that drew them in. They might have just been having fun with the “sexy cat” idea. It did fit perfectly into the sweet category almost to the point of “candied.“

The final wine was an ice wine made from Concord grapes. Ice wines are not as easy to come by since the harvest process is so meticulous, requiring that the grapes stay hanging on the vine until a frost and then get immediately picked and processed. This is also the reason it is sold in “half bottles” instead of full size wine bottles. This type of wine is common to the New York region, due to the growing conditions there. Since it was the last wine of the evening the descriptions weren’t so verbose but it was tart and sweet and managed to make it’s way to the favorites and “will drink again” lists.

Although some of the wines were simply described as “no”, I am very happy to have thrown the East Coast Wine party as a way to expose some California wine drinkers to some new wines. Neil and I really enjoyed getting a chance to try some things we had only read about, and we look forward to inviting everyone back for another wine-themed party in the future.