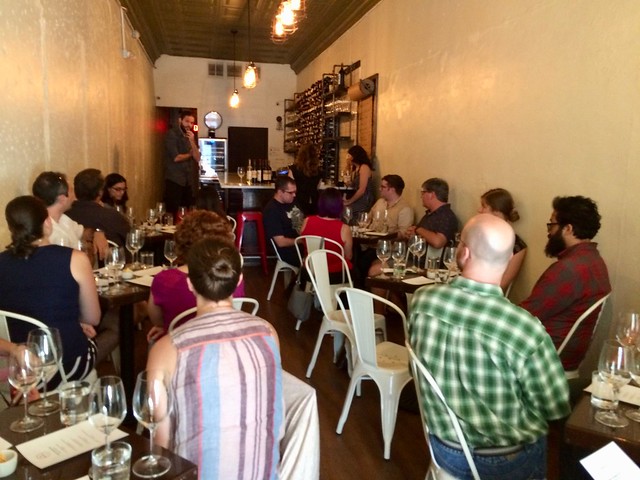 During my time in Durham, NC, I was keeping my eye out for wine tastings and other wine experiences. When I came across the calendar of events at Bar Brunello, I was so excited to find such titles as Orange wine, South American wine classes and Eastern European tastings. Not only have I never tasted wines from this part of the world, to be honest, I wasn’t even sure what countries would be included in this area. Once I finally made up my mind to attend the Eastern European tasting, the first one was sold out, but luckily there were 2 so I promptly booked the second event.

The space was kind of small with around 6 tables and a bar in the back. It was open seating so I found a seat in the middle of the room. Our tasting was lead by Esteban, the owner of Bar Brunello. His ethnicity is part Czech and said he offers this tasting as a way of honoring his heritage. He let us all know that although we may not be familiar with this region for wine, it is an up and coming region with easy drinking wines at affordable prices! Sounds like some wines I definitely want to try. 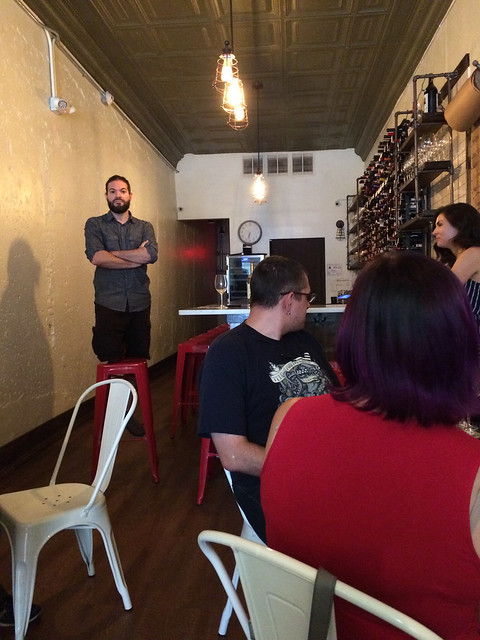 I’ve gone to my share of wine tastings but there was so much to learn at the Eastern European tasting! Esteban let us know that if you want to cleanse your mouth between wines, it’s best to eat a small bite of cracker. He said that drinking water will cause you to water down your next wine. How have I never heard this before? He was really funny telling people how to taste their wine too. “Put your nose in it, Get Nasty!” “Then swish it around your mouth like it’s mouthwash.” Also we know that you should chill your white wines, as well as a your reds for a bit, but if the wine is too cold, you won’t be able to taste anything.

I loved how interactive the class was! He kept asking us to guess the alcohol level of the wine and asking “What level of acid did we think it had?” I thought it was pretty funny that he said they all had medium to medium plus acidity since I only noticed a hint of acid in a couple of them. He also had us yell out our flavors and aromas that we noticed. There were definitely people shy to shout out their answers but I felt right at home, feeding on that type of interaction.

I know all of you are curious to hear about the specific wines we tried so here you go! 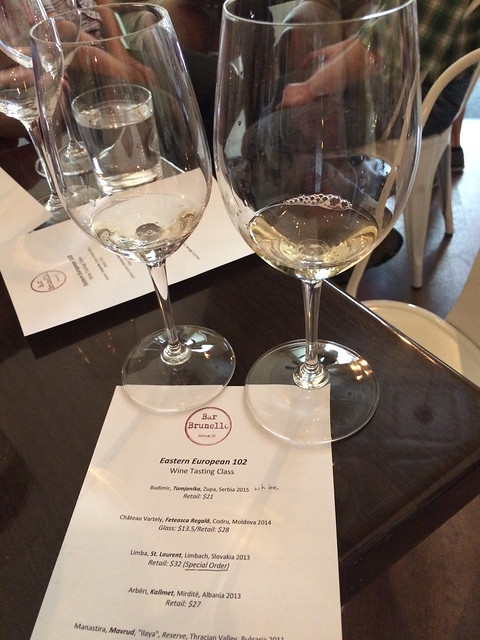 The tasting included 2 white wines and 3 red wines. We started with the Zupa, a Serbian wine that had aromas of petrol, light funk and a hint of sugar. This wine was tart and crisp with some acidity and flavors of peach and lemon. The other white wine was Codru from Moldova. This wine had a very yellow color with chalk and mineral aromas. The flavors were soft but still a bit tart, including apple and lemon with a smooth finish.

When Esteban was telling us about the Limbach, our first red, he said it would be similar to a Pinot Noir from Burgundy. He also let us know that he only had one bottle remaining in the shop to sell tonight but if we want to purchase a bottle, we could come back the next day. I don’t know if it was the buildup of the wine or not but this was my favorite. 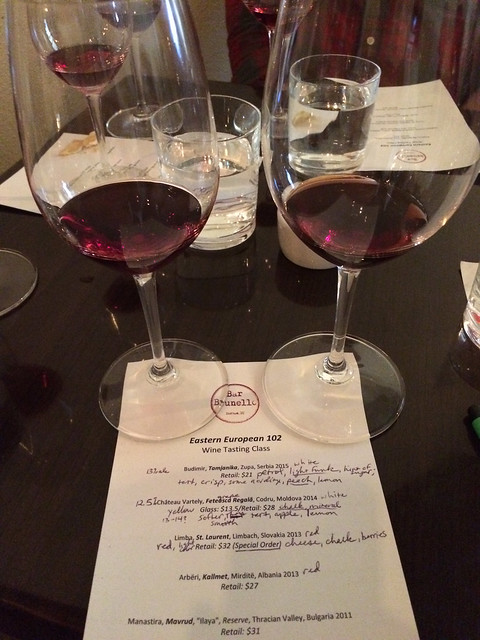 This Slovakian wine had a light red color and smelled like cheese, chalk and berries. It was definitely a funky, stinky cheese aroma. I think some people even said feet! But those of you who know me, know that it made me want it even more! I guess it was the light body and funkadelic smell that made Esteban compare it to Burgundy. The flavor was light, acidic, funky, tart, earthy and smoky. Very interesting and different!

The Mirditë wine from Albania, had a darker red color. This one smelled like funk, flowers, red fruit and red licorice. It was a little sweet with red fruit flavors and a black pepper finish. Then it was dry with a cherry finish and it kept alternating between the two flavors in the finish. 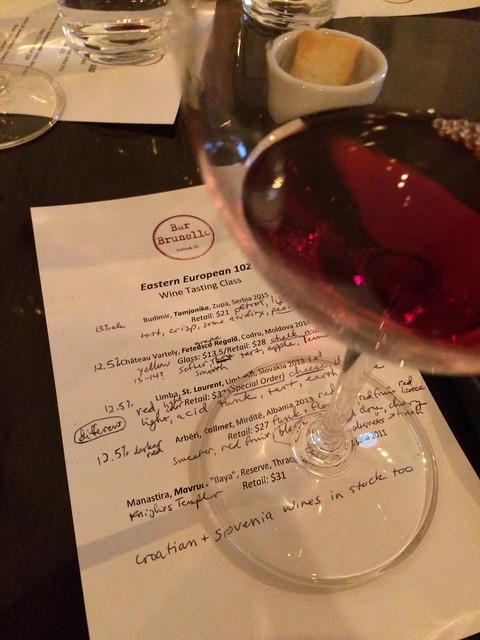 Esteban described the Ilaya from Bulgaria as “Very Barnyard” which was surprising after tasting the funky Limbach. He said this wine has been made since the days of the Knights Templar, that’s a long time! As I swirled this dark red wine, I noticed aromas of earth and blueberry pie. The flavor seemed sweet and sugary to me and another girl at the table, Megan, described it as caramel. It was definitely caramel! This wine was so easy to drink and not at all barnyard for my palate. That’s ok with me though, I just sat there and savored the flavor.

So my impression of Eastern European wines was a positive one. All of the reds were so interesting and the whites had a pretty good range of flavor, although we only tasted two. Another note about the red wines, none of them were super heavy and I didn’t have a black tongue when I was done. Very drinkable!

This tasting was toward the end of my time in Durham, so I decided not to take any bottles home that day but I’ll definitely keep my eye out for wines from this region in the future. And if you’re in Durham, NC, go visit Esteban for one of his wine tastings at Bar Brunello, it will be a great time! 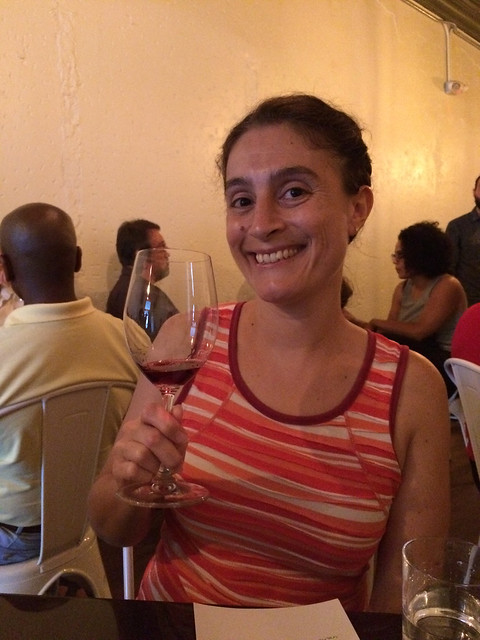