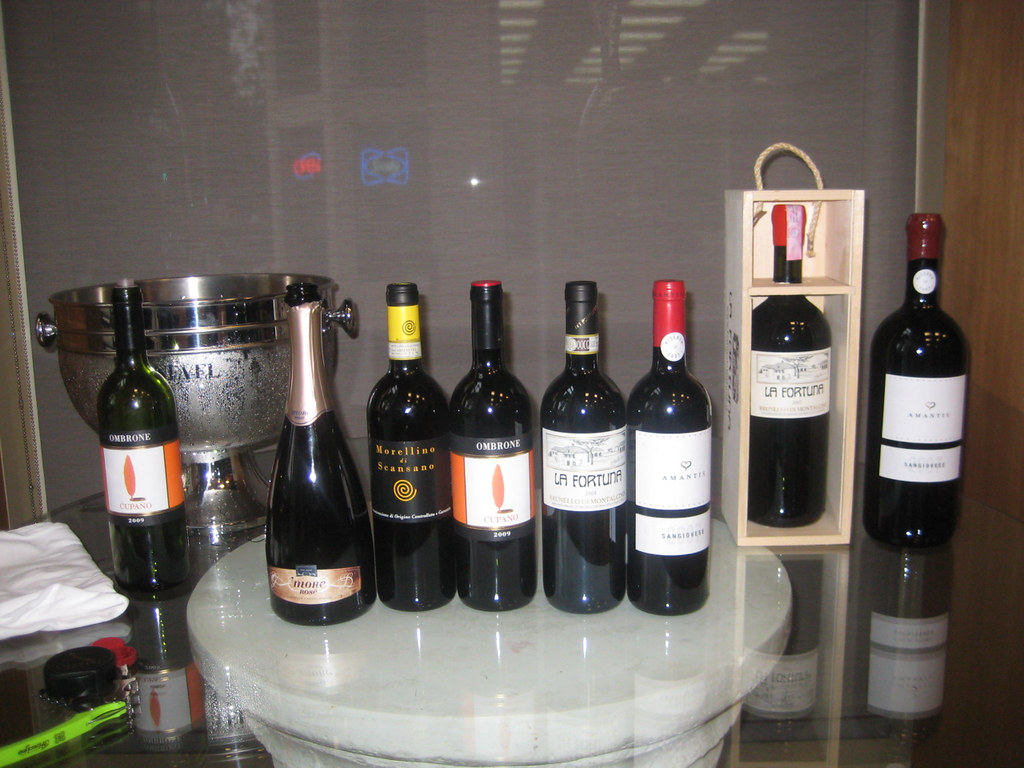 My friend Karen and I were excited to attend the first Wine Class at Enoteca Vino Nostro (www.enotecavinonostro.com) during the week. They spared no expense with the spread they offered; italian meats, cheeses, olive oil, of course, and a spicy sausage, bean and fennel dish. I have described the wines on their own as well as paired some of them with the delicious foods, to see how the wine might change. Since the cheeses weren’t labeled I’ve done my best to describe them in the pairings.

There were 5 wines offered at the course and the owners Parissima & Amanzio Tamanti presented them all to us with a little background about the producers. See the list below for vintages and percentage of each grape used in the wines.

We began the tasting with ‘more Brut Rosé prepared in the Metodo Classico. Amanzio described this method as the same techniques that would occur in the Champagne region of France, only in Italy. There is a lighter concentration of yeast and minimal contact with the skins to create this light sparkling Pinot Noir. As I tasted the wine, I noticed a nice strawberry flavor.

Our second wine, Morellino di Scansano di Toscana, was from Southern Tuscany and made in a rustic style. This wine had vanilla & strawberry aromas, a lighter body, and slight tannins. We will try a few Sangiovese wines this evening but this one is considered an “entry level” wine so it is a little lighter than the others. I paired this wine with Prosciutto which sweetened the wine and also with the bread & olive oil that caused the richness in the wine to increase.

Amantis Sangiovese Riserva di Montecucco, is made from grapes that grow on the back of the mountain, contributing to the earthy aromas. I noticed anise, spice & earth aromas with cinnamon and nutmeg flavors. This wine came across as a little too spicy for me, but pairing the wine
with a dry crunchy cheese calmed down the spice.

The Cupano Ombrone “Super Tuscan” has only 3000 bottles produced so it’s not easy to find but I’d check this one out. When I swirled this wine I picked up spice & anise aromas, which I usually find in Italian wines but I did find this strange since it’s only Cabernet Sauvignon and Merlot. The wine had a smooth, soft flavor with some spice on the tongue, which I really enjoyed. We were saving the spicy sausage, bean and fennel dish to pair with this wine. The combination of the sausage and bean with the wine caused the spice to rapidly increase in the wine, a little too much for me. The fennel and the wine was a much easier pairing. I decided to pair the super Tuscan with a waxy cheese which also caused the spice in the wine to increase but then it felt a little lighter bodied.

Similar to the first wine, La Fortuna Brunello di Montalcino, has specific rules and regulations due to the type of wine. In order to be considered a Brunello di Montalcino it must come from a certain part of Tuscany and be 100% Sangiovese. I picked up anise aromas and tar and tobacco flavors.
I paired the Brunello with a funky cow cheese which caused the cheese to become even more funky but then made the wine more sweet, pretty cool combination.

I had a great time learning more about the Sangiovese grape and Tuscany grape growing regions and look forward to more classes at Enoteca Vino Nostro. Especially since it’s right down the street from my apartment!