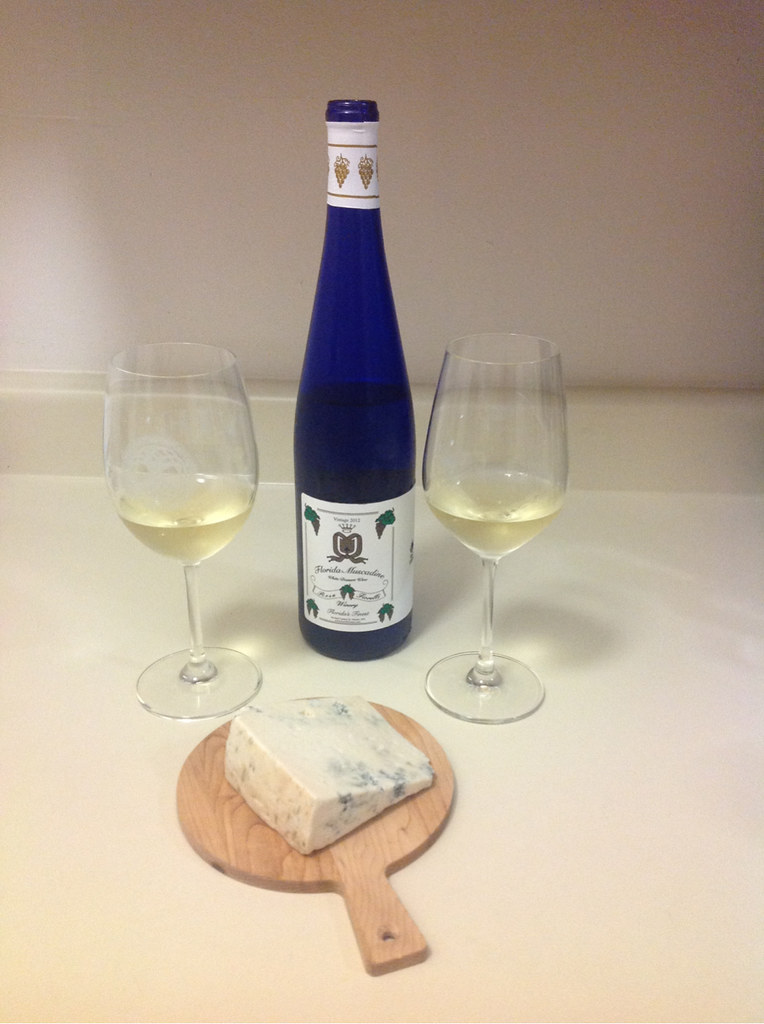 This week we are revisiting a wine from our past. Florida Muscadine, white dessert wine is produced by Rosa Fiorelli Winery, where I used to work. (http://www.fiorelliwinery.com/) This wine was one of our best sellers because the muscadine grape works so well for a dessert wine! It’s been a while since we’ve had it so I was curious how sweet it would actually be?

When I initially swirled the glass, the wine smelled pretty and it reminded me of pineapple lifesavers! Neil picked up aromas of cassis, tangerine and cantaloupe. The flavor was definitely sweet but also soft and smooth, tangy and rich. Neil also identified the distinct white muscadine grape flavor and pear. The muscadine grape is very popular in the Southern US and is so flavorful that people buy them by the pound from vineyards to eat by the handful! It was nice to be reminded of that delicious flavor.

We found the cheese at Cheese Plus, our local cheese shop. (http://cheeseplus.com/) Many people in the store checked to see if they could help me but I just wanted to check out their huge selection of cheese. Once I took it all in, John, their cheese buyer, helped me find an artisan cheese that would go well with a sweet white wine. He told me Harbourne was a goat cheese from London and it saved the goat cheese industry in London. After a taste, I figured I should give this monumental cheese a try.

The cheese smelled salty and had a thicker texture like feta. It was salty, pungent, and I could feel the tanginess in my tongue. Neil thought it tasted exactly how he would imagine a blue, goat cheese; mild goat flavor, mild tanginess, blue but not overpowering, medium firmness, melts in your mouth.

When we paired the Florida Muscadine, white dessert wine and the Harbourne cheese, I noticed more pineapple in the wine, spiciness on my tongue, and light honey. The cheese seemed more mild and no longer tangy. Neil didn’t think much happened during the pairing, except the wine did make the cheese that was absorbed into his tongue a little tangy. Guess it was a good pair for me but only ok for Neil.

At the end of our pairing, we tried out a suggestion from Rosa Fiorelli, herself. When people would buy the wine she would always tell people to have it with cheese cake or add pineapple juice and vodka for a refreshing summer cocktail. We went the cocktail route and it was fabulous!