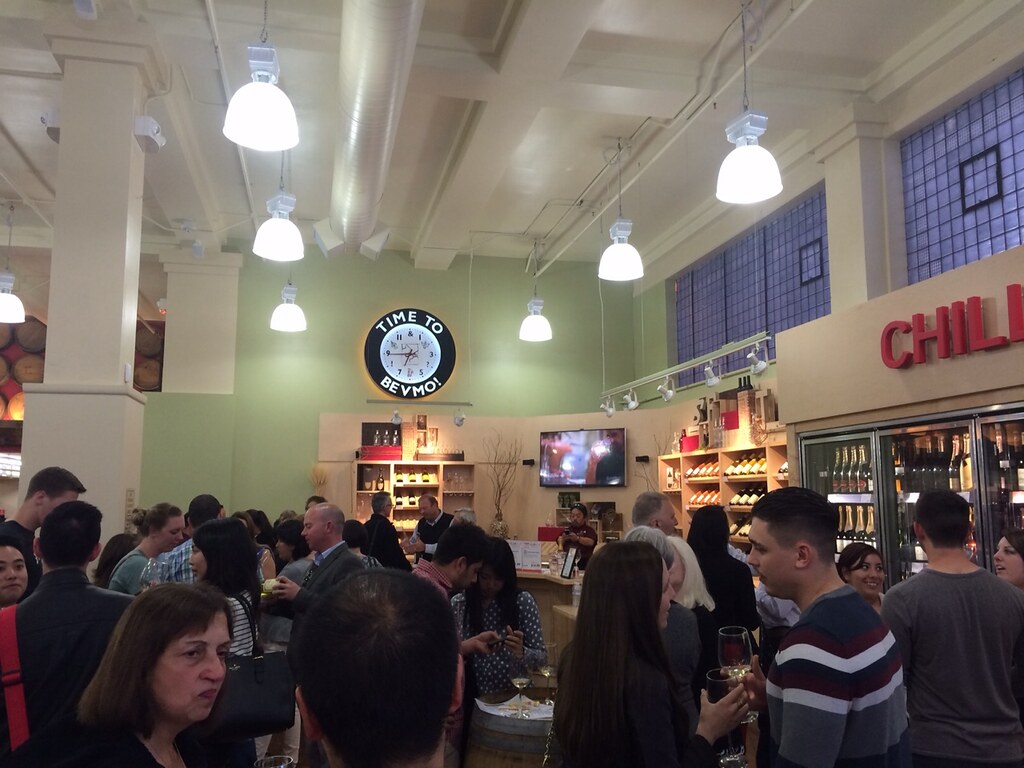 In order to celebrate WineAndCheeseFriday this week, we purchased tickets to the French Wine Tasting Event, hosted by Pierre Sparr, owner of Charles Sparr Winery. This event was held at the BevMo down the street from our apartment. (http://www.bevmo.com) They remodeled the entire store a few months ago and now have a tasting bar where they hold weekend happy hours as well as some more formal tasting events. This will be our first time using their tasting bar so let the tasting begin.

The wine list for the evening was as follows:

A majority of the wines served that evening were white wines, with the only red being the Louis Jadot Beaujolais-Villages. I’m usually on a quest to try new white wines so I anxiously awaited the next wines. White wines appeal more to me because there is typically a nice fruit bouquet.

When we swirled the Louis Jadot Macon-Villages, I found it to be fruity, sweet and smooth and Neil identified honeysuckle and oak. The wine mellowed while I drank it but it was initially light with fruit and a smooth texture. Neil noticed the medium body, honey and sour apple flavors, but neither of us knew it was Chardonnay until the end of the tasting. What a difference drinking French wines, where the emphasis is on the terroir and not the varietal.

Up next was the Charles Sparr Pinot Blanc Traditional in which Neil smelled aromas of rubber hose, pear and some alcohol. I found the wine to be soft and crisp with peach flavors and a rich finish. Neil commented on the sweet and tart mineral flavors. It seems we both found this wine to have a split personality.

The Louis Jadot Pouilly-Fuisse probably had the biggest discussion around it that evening. I thought it had the boldest aroma of fruit, up to that point in the tasting. Neil noticed cat pee and slate while he swirled the wine. After tasting the wine, I identified a rich and tart flavor that was similar to lemon and caramel. Neil decided he didn’t like the super mineral and tart flavors.

As we tasted the Charles Sparr Pinot Gris, we could see how this would be a wine that many people would like. It had aromas of a sweet honeydew melon, green cassis and smelled “clean.” We both found it to be sweeter, lingered nicely and easy to drink. The flavors we identified included oak, kind of tangy, honeydew, and mineral. I think it would be a nice wine to bring as a hostess gift, although it was a little too sweet for either of us.

Now onto the red wine of the evening, Louis Jadot Beaujolais-Villages. We both called the aroma of this wine “strawberry candy”. Neil added cinnamon, blueberry and plum aromas, as well. He thought the flavors were pretty different from the aromas, though, calling the wine light and sour. I found it to be dry and tart with a strawberry finish. I’ve only heard of the Beaujolais region of France for the Beaujolais nouveau wines that are bottled early to celebrate harvest, http://www.beaujolaisnouveauday.com. I thought this could explain the light flavor but then they told us it is not a Beaujolais nouveau. So many things to learn when moving into a different wine region.

The final wine of the evening, Charles Sparr Gewürztraminer, was suggested as a wine that would pair nicely with blue cheese, spicy or Asian food. I described it as smelling “pretty”, sweet and floral. Neil agreed that it was sweet and had honeydew aromas. We differed in opinion of the texture, I called it light and Neil found it thick. The flavors were honey, mossy and some spice in the throat.

This was our first wine tasting since we returned from Costa Rica, so we were both pretty happy by the end. It was great to try so many new French wines and even better to see that the most expensive one was only 29.99. Thanks for a great tasting BevMo!

Note:
The invite stated that the event ran from 6pm-730pm. We weren’t sure if the tasting would be guided or self-guided so we didn’t realize we had to arrive promptly at 6pm. This caused us to rush a bit at the beginning so we could catch up. BevMo proved to have practice in their events because it did end just before 730. So to you readers who might try their next tasting, arrive on time.