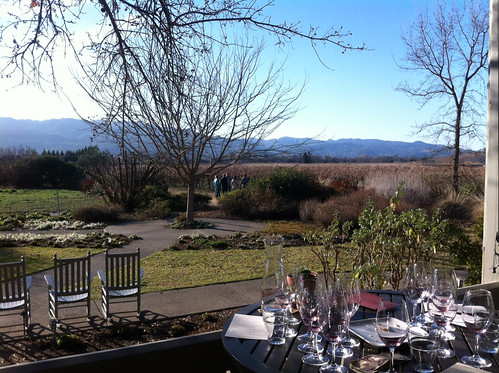 We spent a relaxing Sunday with Jess and Corey at Frog’s Leap Vineyard, http://www.frogsleap.com/html/intro.html. This winery takes a more calm and casual approach to wine tasting. Instead of having a tasting room with a bar, they have a back porch overlooking the vineyard. It was so peaceful sitting at the table and just hanging out! Jess and Corey are Frog Fellows ( wine club members) there so they brought us to check it out. Thanks guys!

Robbie poured all of our wines at the beginning and told us a little about them and then left us on our own. The winery is located in Rutherford so he was telling us how the wines can be influenced by the “Rutherford dust”. He also let us know that some of the wines are blends with one grape as the base instead of pure varietal wines.

There were four wines on the tasting menu that day. We were fortunate to taste 2 additional wines because we were special. The tasting began with a 2012 Chardonnay, from the Carneros region of Napa Valley. It smelled acidic and had flavors of mineral and slate. I felt it was crisp and tried some cheese to see how the wine would change. The cheese smoothed out the wine and made it a little more enjoyable for me. Neil thought it was a good middle-ground Chardonnay, both crisp and creamy.

Jess and Corey gave us a bottle of the Frogs Leap Zinfandel for a housewarming gift so this was our second time trying the Zinfandel. The 2011 Zinfandel from Napa Valley contained a small amount of Petite Sirah and Carignane. This wine had aromas of raspberry, pepper and minerals. Although the wine was light-bodied, it still had flavors of vanilla, raspberry and pepper. This wine seemed different than what I remembered so maybe we had a different vintage before?

Our next wine, a 2011 Merlot from the Rutherford area, had a mineral aroma at first and then smoothed out. There were berry flavors and vanilla. The Merlot was more full-bodied than the Zinfandel and a little smoky. This wine was tasty, I asked for a little more at the end of the tasting.

Now onto the 2011 Cabernet Sauvignon, from Napa Valley, which had a different flavor than I expected. Maybe it was due to the Merlot and Cabernet Franc blended in? I couldn’t pinpoint the specific aromas but I picked up Earthy and berry flavors. Neil said it was light without many tannins.

As a bonus, Robbie brought over their reserve wine, the 2010 ‘Rutherford’ from the Rutherford bench in Napa Valley. It was earthy, tannic, and smooth. I can see how it’s one to save for a special day. Jess and Corey already have a few bottles waiting in their wine cooler. We tried the Cabernet and the Rutherford side by side and the Cabernet had more berry flavors than the Rutherford.

That day the winery decided to open a 1998 Merlot from their collection and we even tried that. It was a good day to be there! The wine had a very different appearance than other wines we’ve tried, Brick red/orangey color and a thicker texture. There were tomato aromas that reminded me of chili. The flavor was mild and coated the mouth, sort of like a Bloody Mary with a spicy finish. Most definitely the oldest wine we’ve tasted!

Overall the wines were very drinkable with berry flavors. The perfect type of wine for sitting out on the porch with friends on a Sunday afternoon!