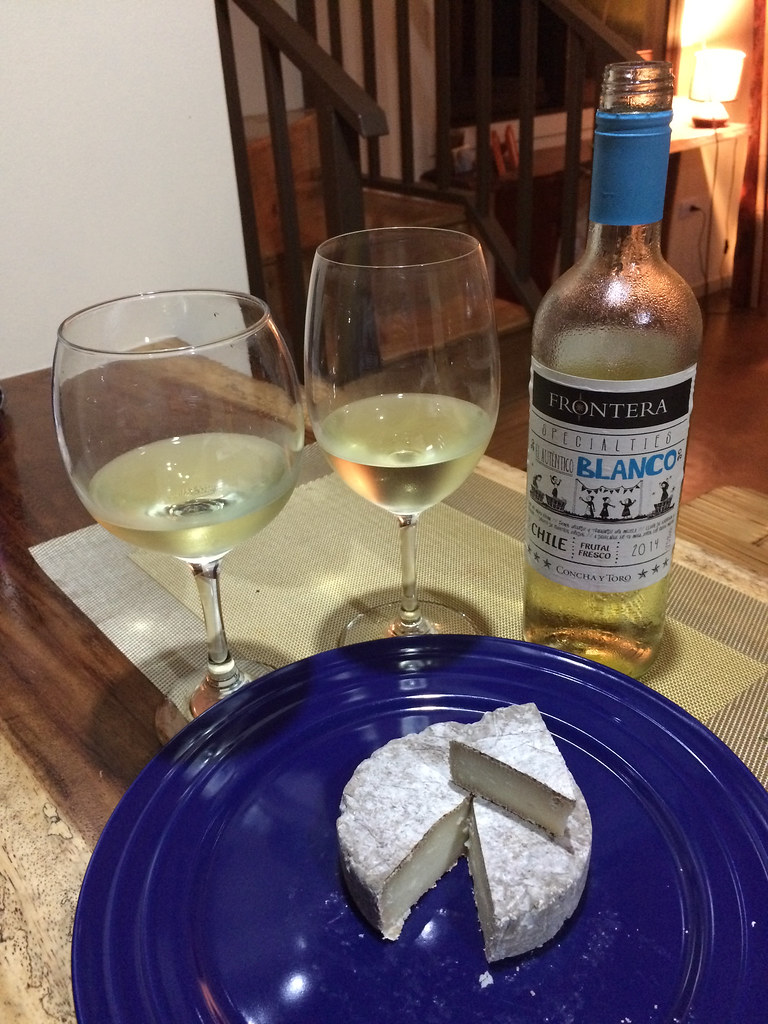 Yes, it’s true, we purchased this wine because of the label. It looked like such a fun wine, I couldn’t resist. I had no idea what grapes would be in this white blend but I did know that there was Sauvignon Blanc, Chardonnay and I think a Moscato on the shelf next to it by the same brand. I was holding off on purchasing this wine but this is our last Costa Rican wine and cheese entry, so it was time. The cheese, I had also been watching longingly and missed my chance. The collection of MonteAzul cheeses all looked so good but one in particular caught my eye. It looked like it was one of those pyramids of goat cheese with ash around it but sadly it was out of stock when I finally got around to making my purchase. The one we did get is still by MonteAzul but we could only guess what it would be. From the shape and packaging, it looked like it was going to be a goats milk Brie. Now without further ado the pairing and tasting notes for Frontera Specialties Auténtico Blanco and Chirripo Blanco cheese. 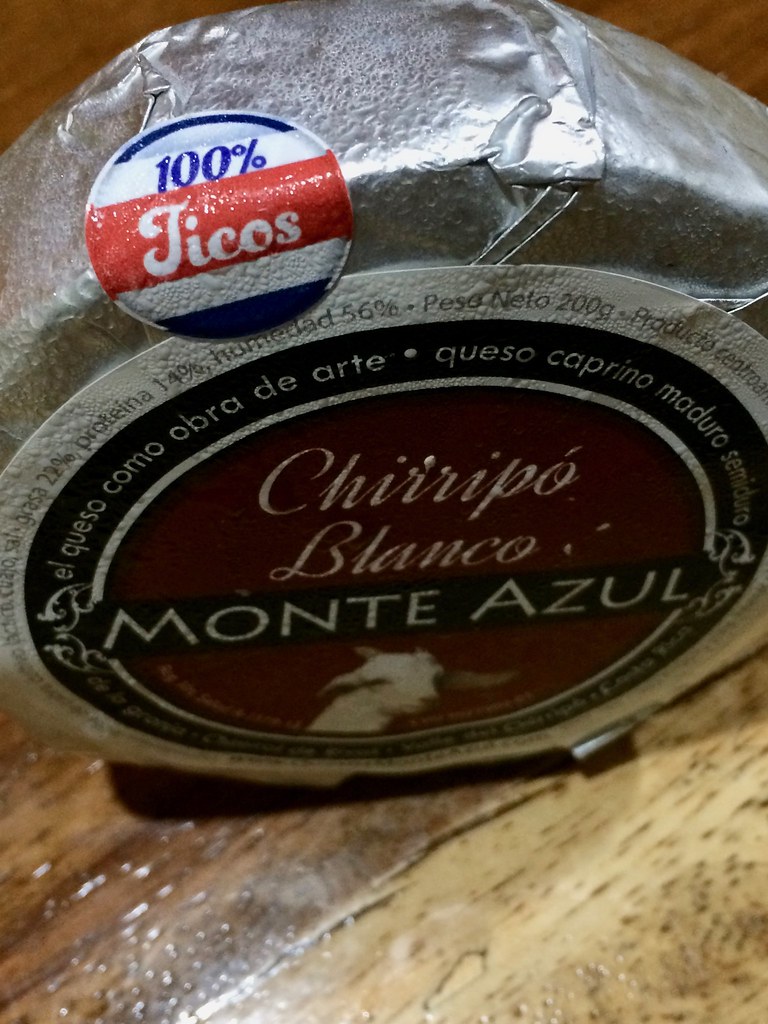 Since we didn’t know what the wine was we attempted to figure it out during the tasting. I thought the wine smelled like a chardonnay but it was also sweet and minerally. When I sipped the wine it seemed soft and mineral at the same time. There were some hints of light citrus but then it seemed like high acid. I could feel the acid on my teeth and taste buds. Then there was a light chalk finish. With my guessing, the flavors made me think of Sauvignon blanc instead of Chardonnay. Neil could smell and taste grapefruit, lemon and honeysuckle. He noticed the buttery chardonnay flavor too. He didn’t like the combination of citrus and butter though. He felt it was kind of unexpected.

Now that I’m writing the entry I decided to researched the wine and found out the blend is actually Viognier, Chenin Blanc, and Riesling. Having seen the other possibilities on the shelf, I didn’t consider that it could have been other varietals. I think these are all grapes that could go in the acidic direction or produce mineral flavors so the notes make a little more sense. Also I’m pretty sure I’ve noticed that chalky finish before in rieslings. I’m thinking now the viognier could have gone in the buttery direction too. As we tasted the wine, I thought it was a little too acidic. Guess it wasn’t the blend for me. 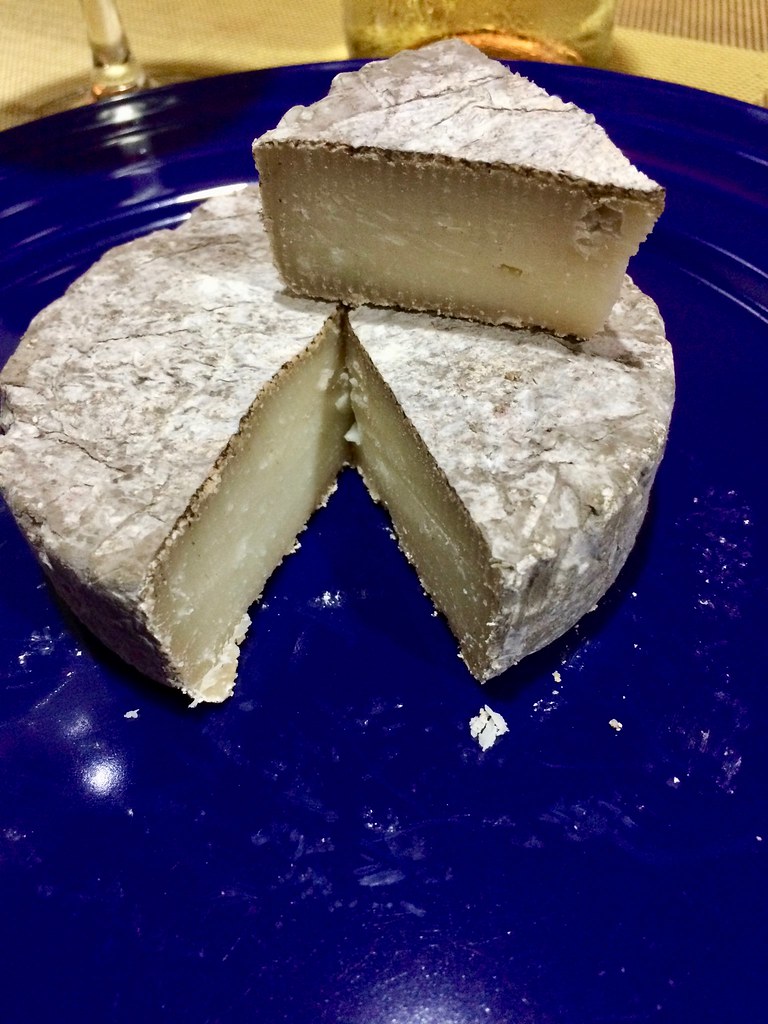 When I opened the cheese, I wondered what it would be like? I cut out the wedge for the photo and found out it was a harder cheese than I expected. There was also either an ash coating or mold on the rind, I wasn’t quite sure. This cheese definitely had a strong aroma. Neil said “Smell that brine!” I picked up aromas of goats, barnyard funk, salt and milk. Neil agreed that it smelled like goats milk but also thought it was something like cotton. Next he sniffed the rind by itself and noticed brine, cave aromas, and then a leather shoe. Certainly had a lot of aromas! When we took our first taste I identified the little crunchies characteristic of an aged cheese and Neil made note of the firm texture. It tasted like milk but was also chalky and dry. Neil thought it tasted both fresh and aged, with flavors of funk, salt and fresh milk. He even noticed the flavor of butter a couple of times. He thought the rind was very briny but I thought the cheese was more flavorful with the rind. It added a complexity that I liked even though the first sniff made my nose sting a little. The rind also caused the flavor to linger for a bit. I really liked it!

So what about the pairing of this mysterious wine and cheese? We have definitely been fooled by what flavors we would find in both of them individually. Neil found the flavor of the cheese became more like a sweet cream. He described the wine as becoming more interesting since the acid increased and the butter decreased. The pairing seemed to make the individual flavors more noticeable so he declared it a nice pairing. As usual, I had a different reaction. I thought the cheese toned down the acid in the wine and the fruit became more obvious. The wine made the cheese seem richer but there wasn’t much change to the cheese with the rind. I tried the pairing a second time and once the wine was gone from my mouth, I still tasted the cheese. It seemed to really stand out and the wine was too acidic for me. The pairing was good at the beginning but I couldn’t get it to replicate again, too bad.

We hope you enjoyed our visit to Costa Rica and the selection of wines we found. It did seem a little easier to choose wines after we found a few brands that we enjoyed. Our strategy this trip was to find varietals more local to the Central America region that we were interested in learning more about or to go the white wine or rosé route since we don’t like Cabernet Sauvignon or Merlot. And hey, we found out about the Monte Azul brand of cheese which we will definitely look for next time we are here! Definitely an improvement over that box wine that tasted like tomatoes, and all those hard to identify squeaky cheeses!