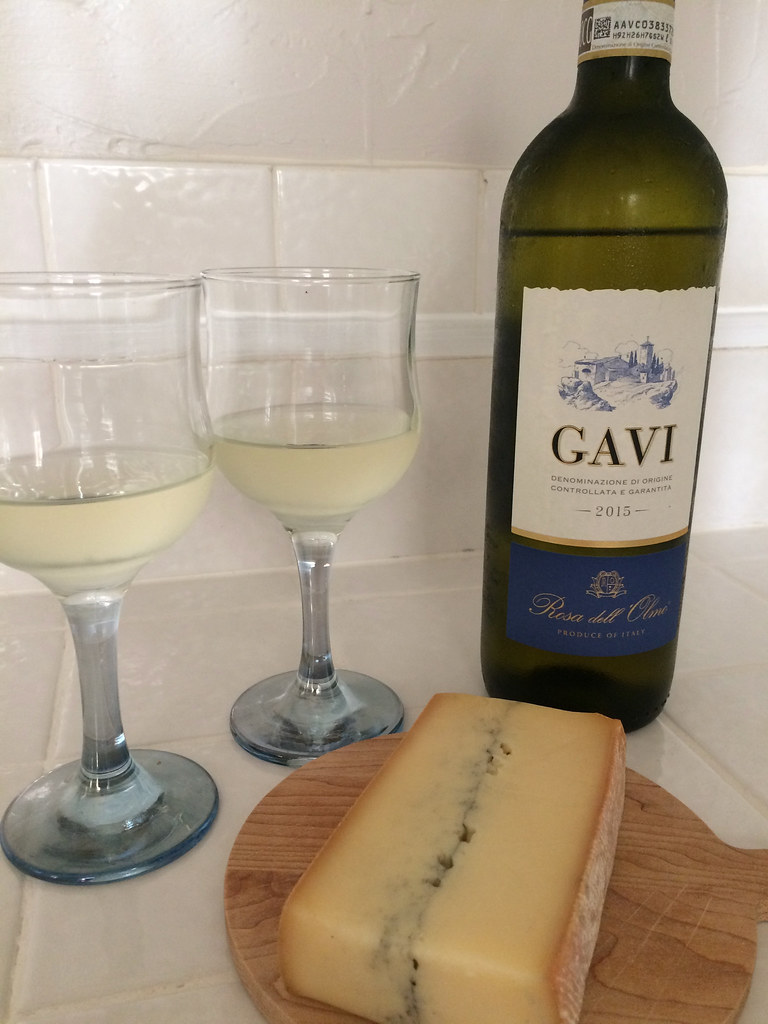 We chose this weeks WineAndCheeseFriday wine by a recommendation from Li at The Wining Hour. I asked her one day during #WiningHourChat on Twitter, “What Italian wine I should try?” and she suggested Gavi. I was so excited to find it during my last trip to Trader Joe’s. She told me it was a dry white wine that she liked but I didn’t really remember much else, so it kind of left our cheese options open.

I just happened to end up at Locale Market, last weekend, so I was on the hunt for cheese. I thought something with ash might be good for pairing with a crisp, white wine. Surprisingly there were a few “ash” cheeses to choose from. I’d tried a couple of them before but this one was new to me and came recommended by the salesperson, Shaun. He said it was “an interesting one with some complexity to it,” key words for me to purchase the cheese. So let’s see how we did matching up the Gavi and Morbier!

Since I didn’t know much about the wine, we hit the internet and found out that Gavi is the DOCG region for Cortese grapes. We couldn’t believe that it was another wine from the Piemonte region of Italy. It seems we really should have tried harder to find wineries while we were there in 2014! Ok well we’ll just have to go back to make up for that, now, onto the tasting. When Neil swirled his wine, he noticed apricot, peach, pear and a hint of slate aromas. That’s a great combination! I added crisp, mineral and lemon aromas to the list. I also made note of the color. It seemed lighter yellow than other white wines that I’ve had. As we tasted the Gavi, I thought it had a mild initial flavor, then a lime flavor, and a tart finish. It was a somewhat acidic wine that reminded me of Sauvignon Blanc. Neil agreed that it had a slight acid, mineral flavors, as well as, honeysuckle and lemon.

We weren’t familiar with the Morbier either but decided to just start tasting. I could smell it when walking by the wedge in the kitchen. And when it was sitting in front of us during our wine tasting, the aroma was kind of distracting Neil. Definitely a stinky French cheese! We didn’t have to work too hard to figure out that it smelled like a big, funky, barnyard. It was pretty intense and even kind of stung my nose. Neil got pretty descriptive in his barnyard funk, expanding to hay, straw and slightly sour. Next we started describing the texture, it was thick, soft, and creamy with a crunchy rind. Their was some good funk in the flavor but no where near as strong as the aroma. The morbier was buttery, milky and slightly salty without tasting the rind. The rind was definitely the part of the cheese that was influenced by the ash. It was earthy, like dirt, and reminded me of a charred hamburger. It seemed strange that the black line in the middle of the cheese, that I thought was the ash, didn’t really have any of those characteristics. We both enjoyed the cheese and could still taste it a few minutes later. We were happy that we tasted the rind, knowing that some people would just cut it off. You wouldn’t want to miss out on that ash influence, would you?

Do you have any predictions of what will happen when we pair this fruity Italian wine (Gavi) with this stinky French cheese (Morbier)? We really didn’t so we just went ahead and tried them together. I noticed quite a few changes in the wine from the influence of the cheese. The fruit in the wine aromas seemed lighter and no longer citrus. It was more like soft fruits. The flavor of the wine seemed mild to start but then the citrus flavor filled my whole mouth, like a burst of flavor. Then I tried the wine after tasting that ashy rind and the flavor of the wine flavor changed to apple juice. After the Gavi, the cheese still smelled funky but it tasted more like cheddar shifting to tart and salty. Neil found the cheese to give the wine earthy aromas and flavors of butter, acid, tartness, and slightly less lemon. He also thought the wine gave the cheese less sour aromas, less salt flavors but the Morbier was creamier and milkier. Sometimes the funk from the cheese leapt out of the wine after drinking it.

We both enjoyed the pairing of Gavi and Morbier! The lingering funk of the cheese really influenced both of us during the pairing. I liked the big wine flavor and new cheese flavor that appeared. Neil thought the wine and cheese were good both individually and when paired. He also suggested that we should try this cheese in a grilled cheese. Always a good idea to me!

A few days after the pairing, we put the wine to the test with dinner. We were having Spicy Chickpeas, Salmon Burgers and Olives to eat that night. When we paired the wine with the salmon burger the wine became really fruity with flavors of apple and pear. The chickpeas have red and black pepper on them so it wasn’t surprising that the wine seemed spicy when paired with them. The green and kalamata olives are salty and caused the wine to be more mild, less fruity and more dry. What a fun time pairing the wine with all these other foods too. And how cool that it changed all different ways depending on the foods. We’d like to buy this wine again! And now we need to because after all that pairing, it’s gone.