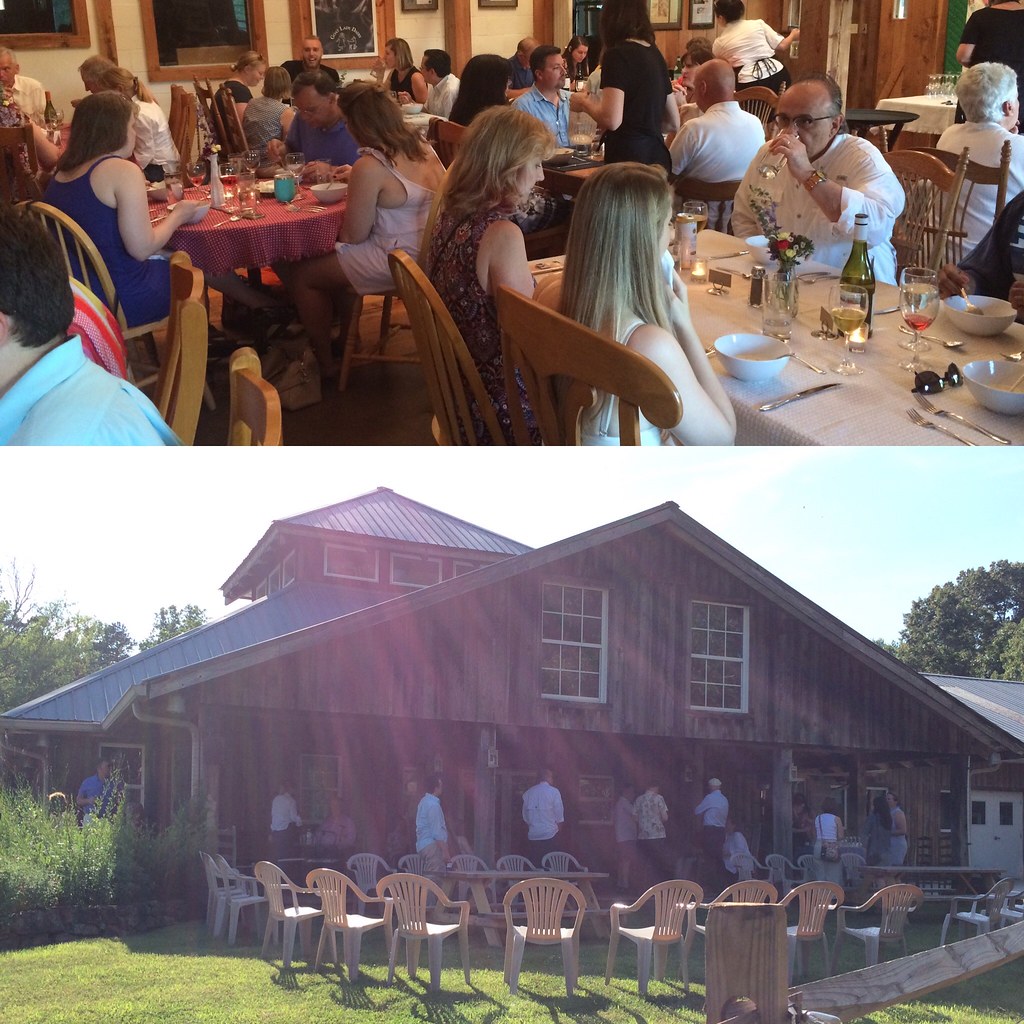 Does the idea of a farm fresh dinner get you excited? Would it help to add in that this farm is a goat dairy that makes cheese? If you know me, then you know I was sold on this idea! Neil and I decided to group together our birthday and anniversary celebrations from the Spring to gift ourselves this farm dinner. As some of you know, we have been staying in Durham for the last few months. Durham is a pretty hip place that is a former tobacco town. That means there’s tons of old factories turned into commercial and residential spaces but not much for farmland or country. Once we got the idea to visit a farm for dinner, we had to figure out where to go. Goat Lady Dairy is about an hour and a half west of Durham, but I was sold once I watched their cheesemaking video online, http://www.goatladydairy.com. It was settled then, we’d pick the date and make our reservation.

Since we don’t have a car during our time in Durham, we borrowed Neil’s cousin’s car. We chose to go the road less traveled (the longer route) and enjoy some countryside on our way out. Surprisingly though, we ended up driving through the area with all the grocery stores and restaurants. We did find that farmland we wanted for our last few miles though. Goat Lady Dairy is pretty far out there, down a winding road but they do have a sign so just keep your eye out for that. 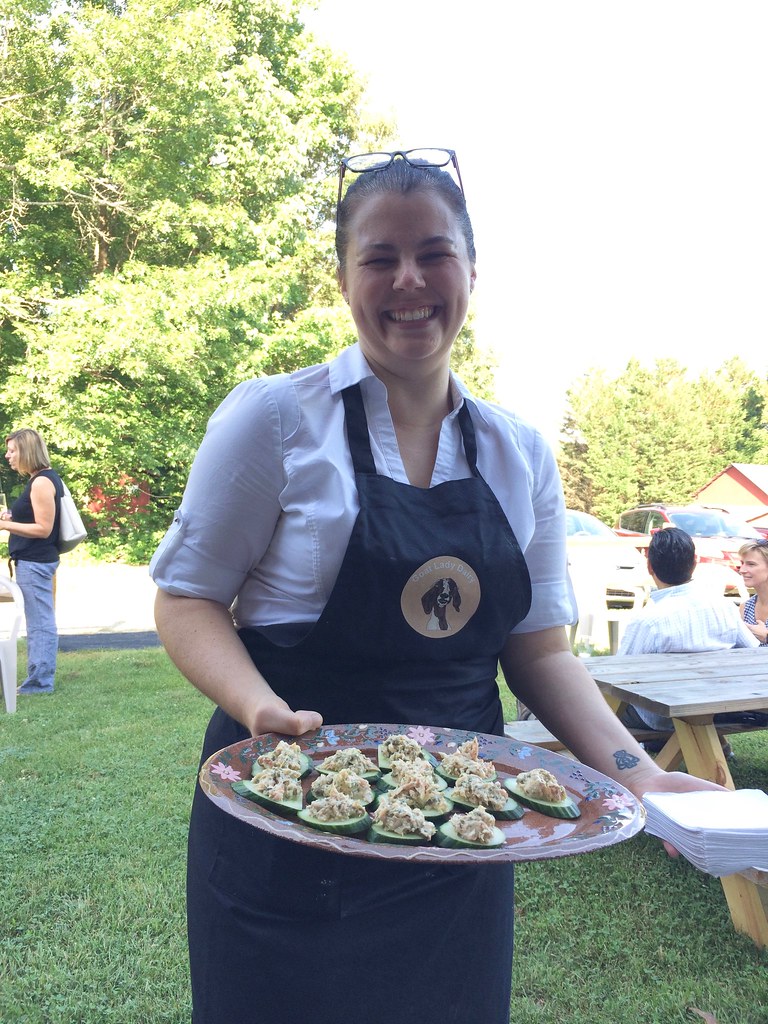 Upon arrival, everyone was getting settled into the front porch and hanging out on the lawn. Our first treat of the evening was a porch snack. It was smoked trout with dill and capers on a cucumber. How tasty and gluten free, they were starting off great! After about 30 minutes of relaxing, it was story time.

The former owner, Steve told us all about how Goat Lady Dairy was formed by his sister Ginnee and her two pet goats. She became known around town as the Goat Lady and the name stuck! This property was an abandoned tobacco farm and started out as just a hobby farm. Ginnee would make cheese, kind of just for fun, and, every now and then, share it with the locals. Then about 10 years later Ginnee convinced Steve that he and his family should move down and become part of the local food movement. Well they didn’t call it that back then because they were doing it before the movement actually began. 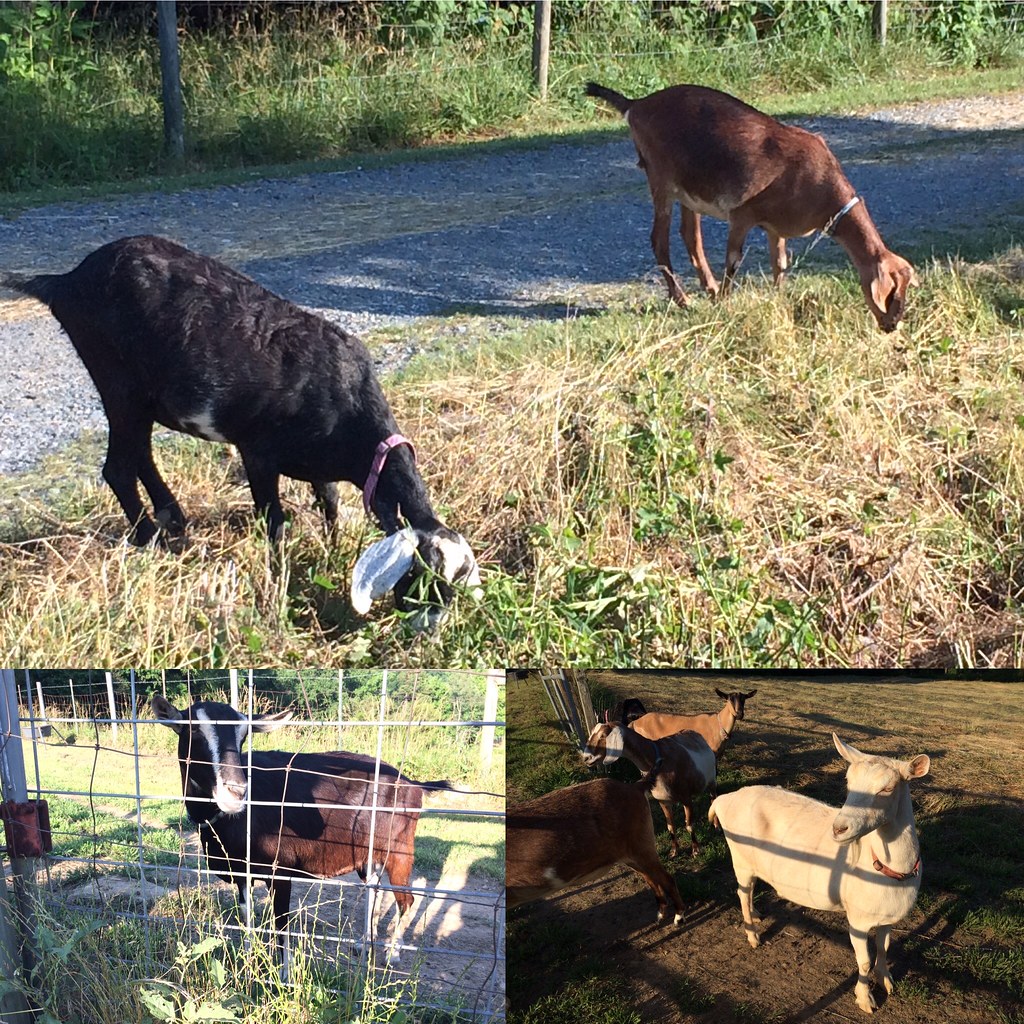 Today, Goat Lady Dairy is owned by Carrie Routh Bradds & Bobby Brads and, as far as we know, is the second largest creamery in the Southeast region. They not only have grown their herd to 300 goats but their cheese is being sold up and down the entire East coast in Whole Foods stores as well as many other places. Their herd is housed offsite at Lindale Organic Dairy and is made up of 3 breeds of goat: Nubian, Saanan and Alpines. Each breed can either be identified by their ears or their color. Nubian goats have long floppy ears. Alpine goats have ears that stand up. Saanan goats are all white. Bobby Bradds told me he’s happy the herd is offsite because there’s less poop to deal with and they can concentrate on the cheesemaking. They do have a few retired goats on the property, which was nice so we could see a few during our tour. And just like Bobby said, as soon as we met one of the goats, it pooped and peed right in front of us ? I still gave it a quick pet, despite my childhood fear of goats. 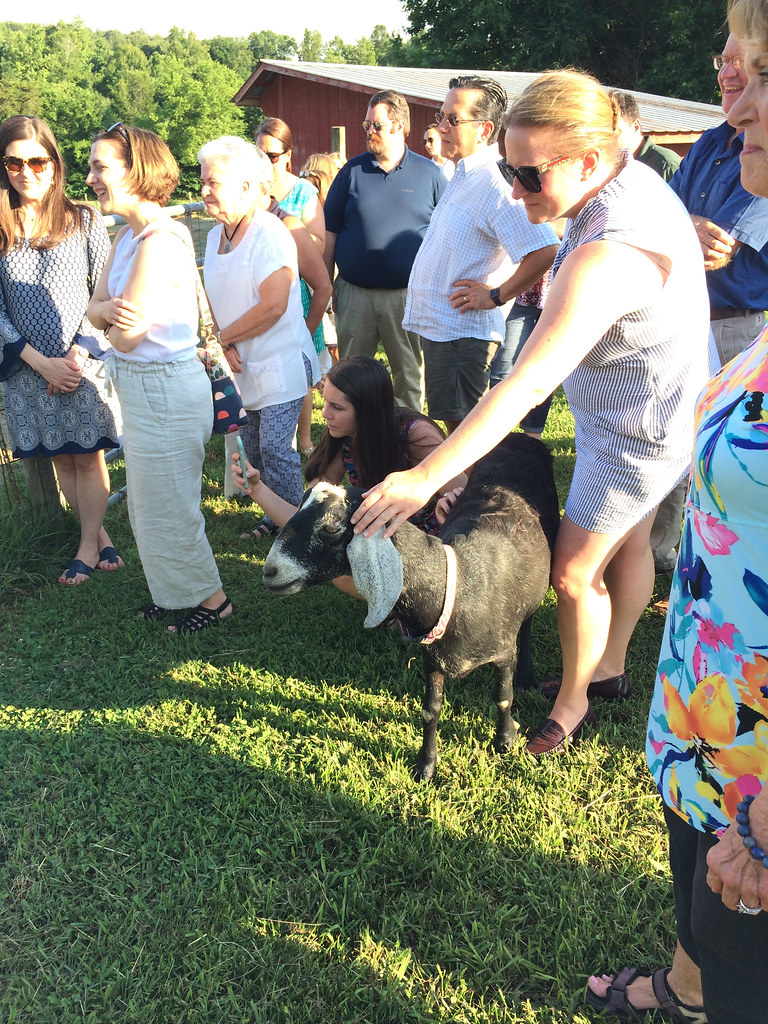 One of my favorite parts of the tour was when we learned the Things You Think You Know about Goats, but are Wrong. We were all city folk after all! Having a bunch of goats in your yard won’t help you mow the lawn, they eat woody food, not grass. No, they don’t eat everything–like cans and boots–but they do put a ton of stuff in their mouth. That’s how they touch things since they have hooves. And yes, they do eat poison ivy but that’s just because they are crazy. It doesn’t hurt them though and some of their immunity to poison ivy may actually be passed to humans by eating their cheese. And have you heard the expression, Someone got your goat!? Well that’s a funny story. Goats love to be around other animals and can actually produce a calming effect on their friends. So if someone frustrates you, you must not have that goat there to help you stay calm, in other words, someone got your goat! One last bit of goat trivia, goats are the most intelligent type of livestock and rank up there as smart as dogs. 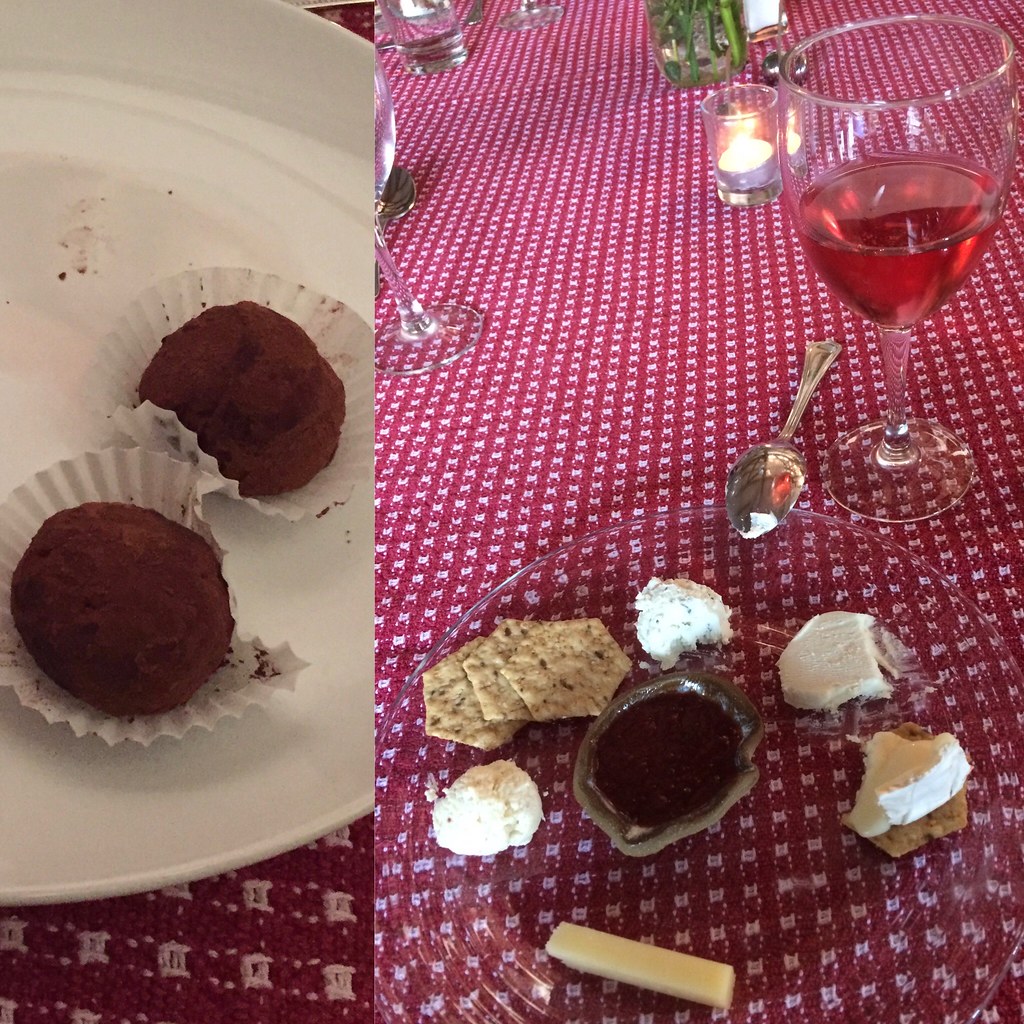 Now that you know all about the herd and the farm, let’s talk cheese! The cheese course was the beginning of the sit down meal and was plated in a circle like a clock. Before describing each cheese, Bobby told us the location on the fictional clock. First up was the basil and garlic chèvre at 12:00. This is one of their original cheeses that has lots of garlic as well as basil flavor. I really liked the flavor but thought it might not work in a wine pairing. It did however work very well with the strawberry chutney! At 3:00, was the Smoky Mountain Round, and it was pretty smoky. In the 5:00 position was the Snow Camp, a bloomy rind cheese named after the town where the goats live. This cheese is a mix of cow and goats milks and reminded Neil of the 3 milks Robiola by Luigi Guffanti. Lindale, a raw milk cow Gouda, was at 7:00. It’s been aged for at least 6 months and had both a creamy and tart flavor. The final cheese, at 9:00, was their fig and honey chèvre. It had a great flavor! This course was served with a Vinho Verde rosé from Portugal. It was a pretty effervescent wine with a strawberry flavor. And it’s a wine I’ve only heard of, so I was excited that it was included with our meal. 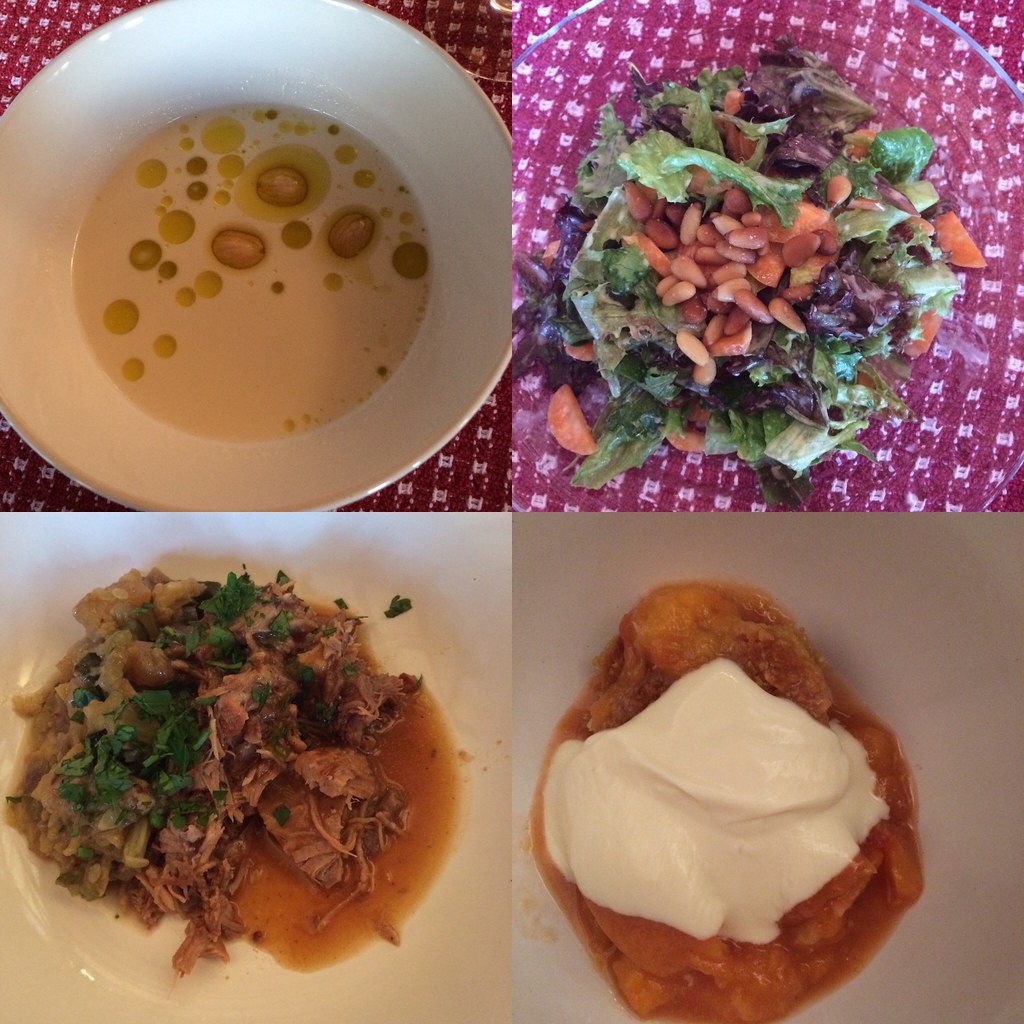 The formal dinner began with the soup course. The soup of the day was Ajoblanco Malegueño, a chilled almond soup. This dish had a nutty broth, grapes that were full of flavor and there was even the flavor of the grapes in the broth. It was unlike any soup we’ve had before and it was the standout course for Neil! Next up was a spring greens salad with pine nuts and a very flavorful lemon vinaigrette dressing. Our main course was braised pork shoulder with ginger and scallion sauce served with squash. The pork was very tender and had a sweetness to it. Neil liked the squash, which is unusual for him because he’s not usually a fan of summer squash. Maybe it was because there was also celery in there? Dessert was a peach cobbler. All of us at the table pondered if it had whipped cream on top or some sort of handmade goats milk yogurt? The peaches were fresh and the cake part was really tasty. They even made a special version of it for Neil without the cake. Each dinner at Goat Lady Dairy finishes with a cheese truffle coated in cocoa. Wow was that good!

We both had a cup of coffee with our desserts and hung around for a bit talking to our new friends at the table. The crowd dissipated while we talked North Carolina, food and life. The cheeses were on sale on the way out so I needed to figure out which one we’d take home. Do you have a guess which one we picked? The Snow Camp seemed like a cheese we could definitely pair with wine so we settled up and it was time to get going. And remember that country road we were hoping for on the way in? Well we found it on the way out. Not quite as enjoyable at night but we eventually came to the highway and it was smooth sailing. We enjoyed our ride home filled up with farm fresh goodies and tranquility. Definitely a fun trip out to the farm! 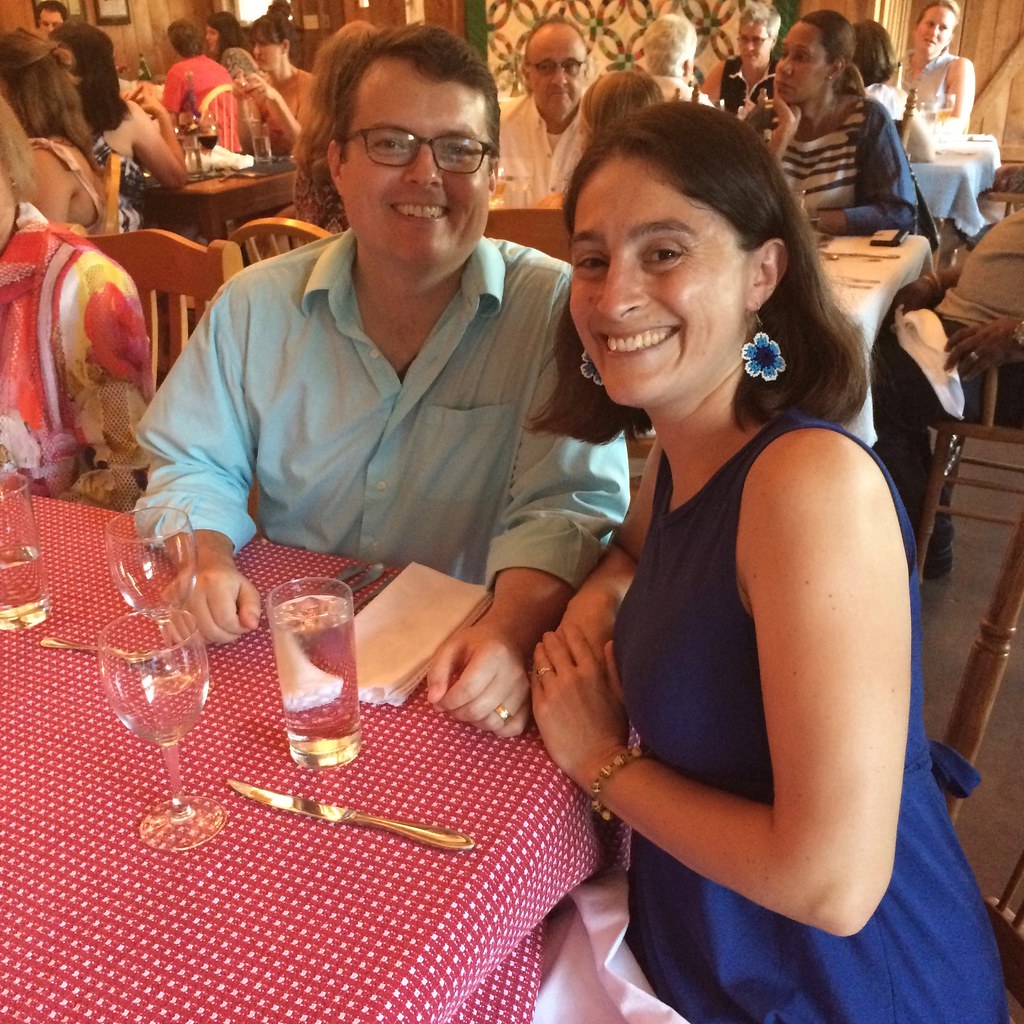 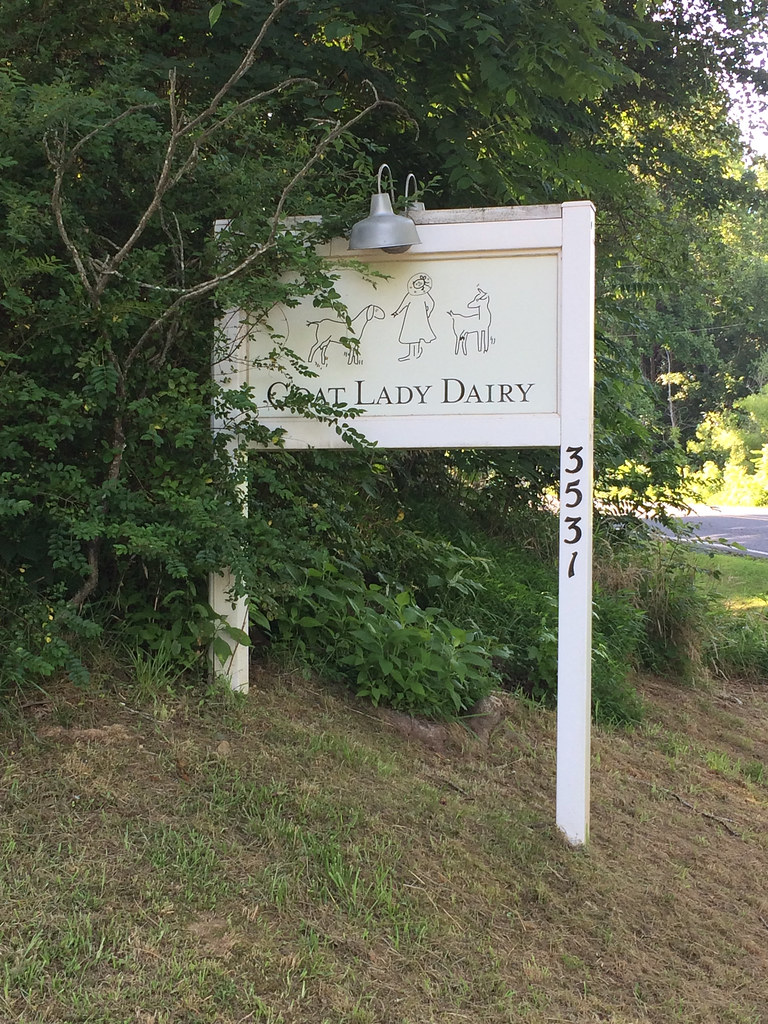