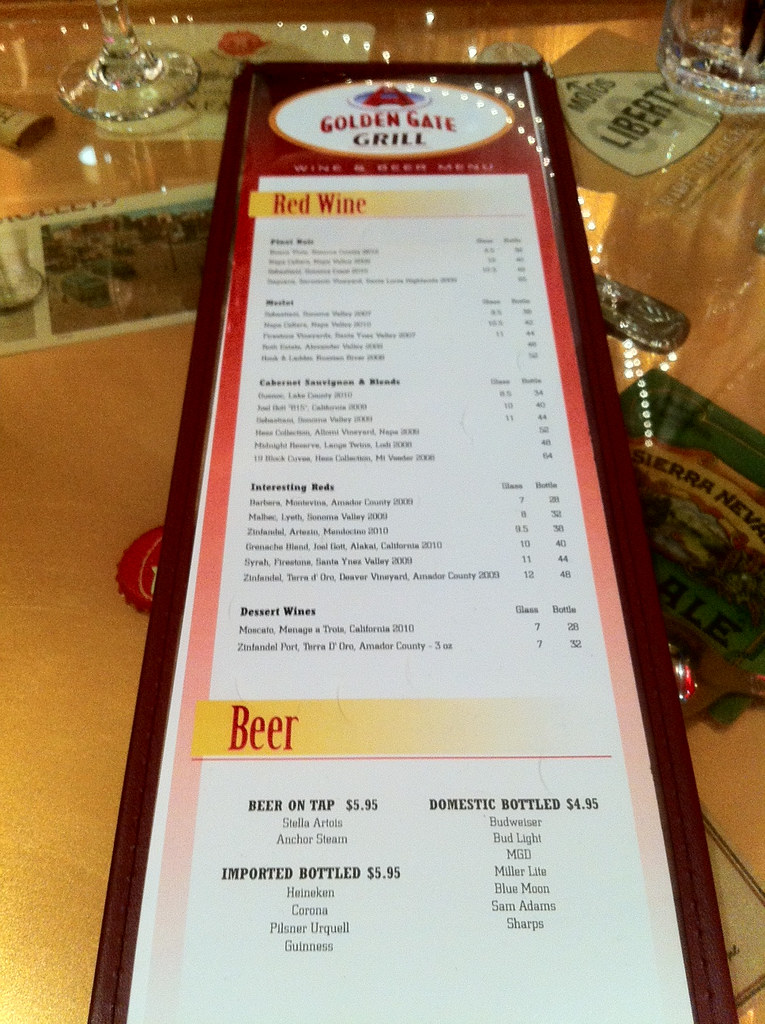 For this weeks wine and cheese, we decided to go out on the town! I had passed Golden Gate Grill a few times and noticed their sign for wine flights so we decided to give it a try! (http://sfgoldengategrill.com/) We apologize in advance for the lack of cheese in this entry ?

The flights at Golden Gate Grill are pretty flexible, allowing you to choose any wine that is available by the glass.

I chose the first wine, a Joel Gott Alakai Grenache from 2010, since I haven’t had many Grenache’s in the past. Neil and I agreed that it smelled sweet and tasted light. Neil also noticed a solid color but felt it lacked a full-bodied flavor. I was surprised how much of a smoky flavor it had, maybe it was heavily oaked?

Our next wine was a Hook & Ladder Merlot from 2008. I smelled oak and Neil said it smelled great! We both found a little bit of tannins but an overall light flavor. As far as fruit flavors, Neil tasted plum and I noticed blackberry. Neil would describe it as tasty with a complex flavor!

Neil picked out the Joel Gott “815” Cabernet Sauvignon, 2010. When we smelled this wine, we were wondering why it had such a light aroma? It did have a strong tannic flavor in contrast. Neil felt it had a full mouth taste with a spice flavor in his throat. I would describe it as jammy and it made me feel warm inside, could have been a higher alcohol percentage.

Our final wine was a Firestone Syrah from 2009. Neil picked up a floral scent on this wine. I noticed oak, fruit and vanilla all contributing to the full flavor and complexity. We both found it to have a light finish but Neil described it as a logarithmic dissipation, being the tech guy that he is.

We noticed all the wines to have a light flavor but would both choose the Firestone Syrah as our favorite. Ironically, this wine is not usually available by the glass but there was a bottle open and the bartender could tell that we’d enjoy it. Thanks!

The restaurant had a fun vibe to it with vintage signs and old cars, as well as a classic brick interior! There were also quite a few wines remaining on the wine list so we’d love to go back again.