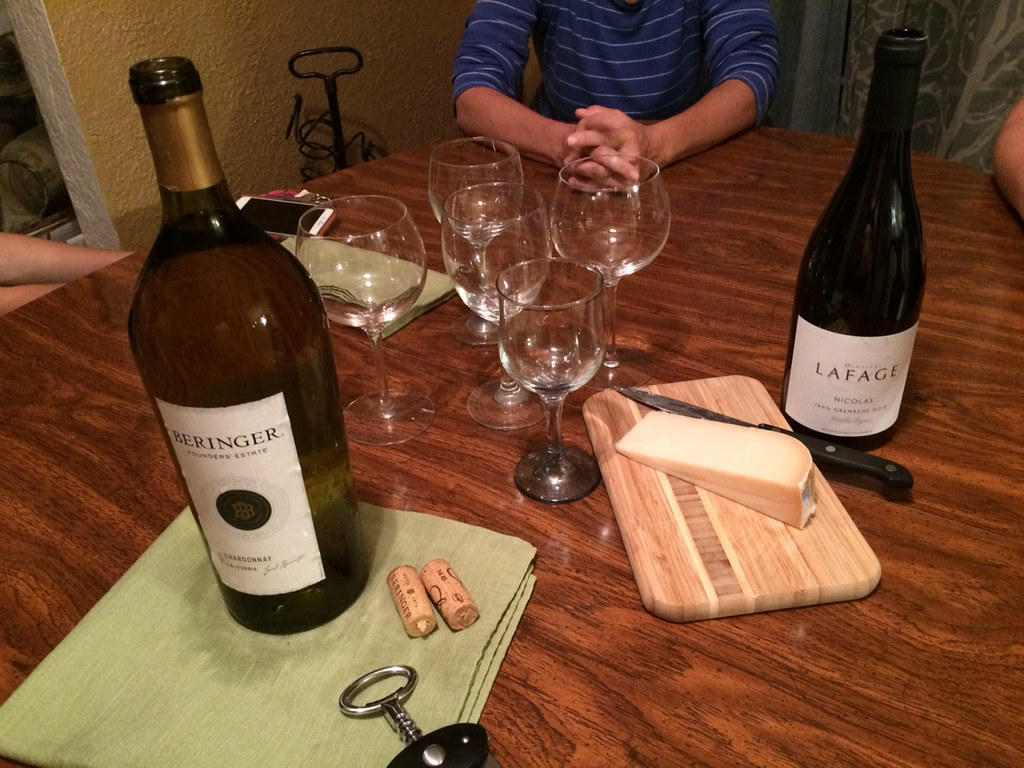 Since Neil and I are the Wine And Cheese Couple, people look forward to drinking wine with us. While we were visiting our home in Florida, some neighbors came over to have WineAndCheeseFriday with us. We were excited to find some wines and cheeses that might be a little more out of the ordinary so we went to a local natural food market called Rollin Oats. (http://rollinoats.com) We found the Grenache Noir, made with 100% grenache grapes, which is definitely different than what you would find in any of the big grocery stores around here. They also carried a nice selection of cheeses but we can never resist a Gouda, especially a cheese made with a milk other than cow’s milk.

It turned into quite a party because Val brought along a bottle of Chardonnay, spinach artichoke dip, chips and some banana pudding. Amanda didn’t know we were having a WineAndCheeseFriday party but we saw her outside and invited her along too. Linda, Neil’s mom, currently lives in our house, so she was here too. What a fun group! We tasted wines, cheeses, all the snacks and even did some pairings. Here’s our tasting notes.

We started with the Beringer Founder’s Estate Chardonnay. Val recommended this product line over the lower level Beringer Chardonnay but sometimes she likes to drink Kendall-Jackson Chardonnay too. Since Val was so familiar with this wine she started the tasting notes, oaked, not too dry but not too sweet either. Linda didn’t taste the oak but said it was crisp and apple flavored. Amanda usually drinks Riesling wines but was open to trying the Chardonnay. She said the wine was ok but it smelled musky and had kind of a vinegar aftertaste. Neil noticed vanilla and cantaloupe/honeydew aromas but found the taste to be a little burnt due to the oak. When I swirled the wine I had a hard time identifying the aromas but it was either caramel or butter. There was definitely a butter flavor, a smooth finish and that same toasted or burnt flavor that Neil was describing. I had a chance to try the wine again a couple days later and found it to be smooth, buttery, and not nearly as toasted. It seemed a lot better when I drank it by itself.

Our second wine was Domaine LaFage Nicolas Grenache Noir. Linda liked the smooth finish of the wine. Neil didn’t like the wine at first because there was a bite in his throat but then he tried some food and said the flavor of the wine improved. Amanda didn’t try this wine, she just stuck with the white wine. I loved how this wine smelled, it was soft and had strawberry aromas! I found the texture of the wine to be light, and the flavor to be dry and taste like chocolate. Val really pondered the flavors of this wine! She started by saying its not bad for a red wine and she liked it. She determined later on that the flavor was black cherry almond pie but was kind of disappointed that the flavor fell flat by the end of the glass. It was exciting to see someone as into tasting wine as I was!

Amanda and Linda really liked the Gouda goat cheese! One of Val’s go-to cheeses is gouda and she described this cheese as “stronger than swiss.” Neil thought the cheese was salty with a good texture, a little funk and Yummy! I totally agreed that it was tasty. I noticed a slight funky aroma, a soft and crunchy texture with a dryness to it and a lingering flavor. Mmm! I was surprised though about the milk flavor, it seemed more like cow’s milk than goat’s milk.

We were all having so much fun socializing that the final part of pairing each wine with the cheese occurred but only some of the notes were documented. When Amanda paired the Chardonnay with the Gouda goat cheese she noticed it made here tongue tingle. I found the cheese to coat my tongue so that might have been why she noticed that. I thought the wine became much lighter and the cheese tasted more milky. Linda tried both the Grenache and the Chardonnay with the cheese and said the red pairing was okay but the white pairing was better. Val and I both paired the Grenache with the Gouda goat cheese. Val found the wine to taste sharp and noticed an alcohol flavor. I thought the wine smelled the same, tasted a little sweeter but was still dry too. The cheese seemed a little more dull. I’d say I liked the wine better in the pairing but the cheese less.

We all had a great time and planned to do it again soon. Thanks for joining us ladies!