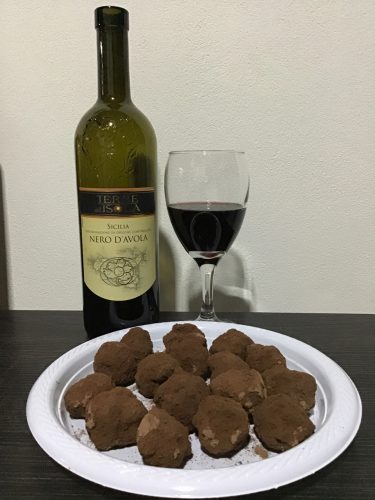 Each year around the holidays Neil and I look forward to making cookies but this year we didn’t have an oven where we were staying. We had to get creative with what else we could make and have it be comparable to our tasty peanut butter Hershey Kiss cookies. We found this recipe for chocolate wine truffles on Pinterest and it seemed like just the treat. We had the correct cooking set up as well as access to the ingredients here in Costa Rica. Also it would be just the thing to bring to our holiday get together with chocolate and wine lovers!

We’ll begin by listing the ingredients in case you are already getting excited to make these!

And for the coating once the truffles are formed,
1 and 1/3 cups (226g/8 ounces) semi-sweet chocolate, chopped OR cocoa powder

I was really excited about my chocolate project but getting a little nervous because we don’t have measuring cups, spoons or a whisk here in our apartment. For most recipes it’s easy enough to substitute those for regular kitchen spoons and a coffee cup but I thought i might need to be a little more precise with these truffles. This sent me over to an online recipe converter to find out mL vs cups, etc, etc so that I could just read the packages I had and figure it from there. And lucky for me, one of our neighbors had a whisk we could borrow. 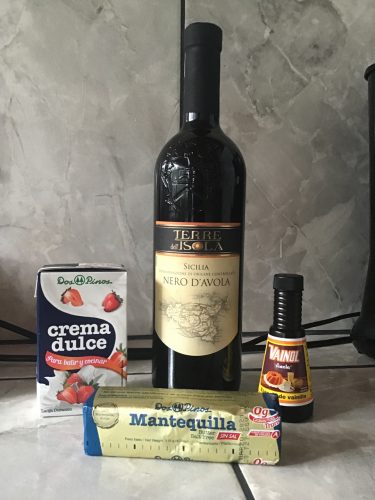 This recipe was also a good choice for us because we typically have these ingredients at home. We always have butter and heavy cream is what we put in our coffee so we always have that too. Of course there’s always red wine here! We also told you already that there’s a lot of local chocolate grown here so we were excited to include that too. The vanilla was probably the only thing that was a little tricky. We ended up finding something in the store that said it was “essence of vanilla”, figured that was the closest thing we’d find so we were ready. 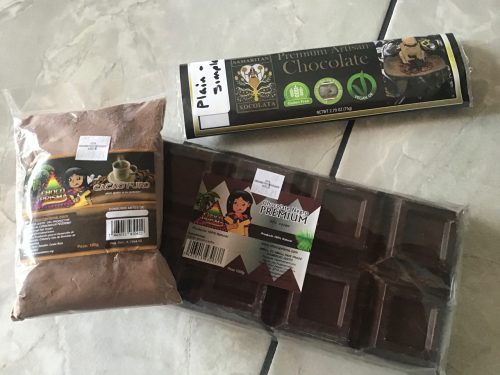 We’d be using two different chocolates in our truffles because I purchased the smaller candy bar ahead of time from a chocolate maker that lives nearby. Once I realized I would have needed 6 or 7 of them, I had to find more chocolate. It worked out well though because there was another local brand in the grocery store and that chocolate bar was enormous. I was still interested in using my original bar too though so that figured into some of my recipe math too. 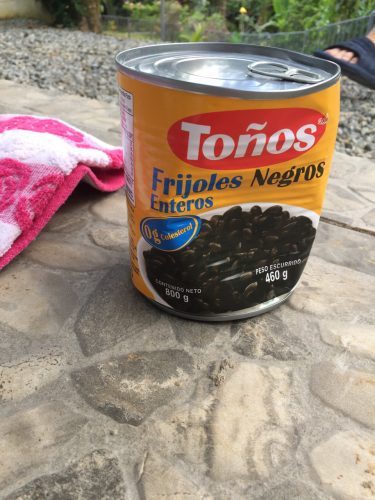 Originally I put the chocolates in the refrigerator so it wouldn’t melt but then I had to pull it out early enough that it would be easy to chop up. Thinking that the chopping would be an incredible amount of work, I improvised by whacking the big candy bar with a can. As you can see from the can, that didn’t work. Neil also tried slamming it on the cement which provided only minimal breakage. Eventually I succumbed to chopping it all up which went fine, once I figured out my technique. 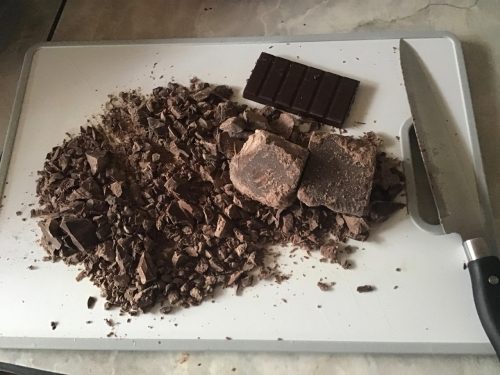 Once all my chocolate was cut up, it was a pretty heaping pile. No way would it have fit into any of my “smaller” pans. I’m glad I chopped it up before pouring my cream into the pan.

Here’s the process once your chocolate is chopped.

1. In a small saucepan over low heat, warm the cream just until it begins to boil. Remove cream from heat and add in chopped chocolate. Allow the mixture to sit, untouched, for two minutes, then whisk smooth. Stir in the vanilla and butter and vigorously whisk until smooth and shiny. Finally, whisk in the wine until completely combined.

2. Pour the mixture into a medium bowl and cool to room temperature before tightly covering the bowl with plastic wrap and refrigerating for 4 hours, or until firm enough to scoop. 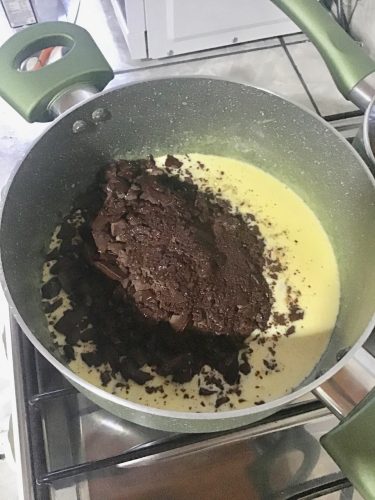 Step one went fine but after all my fooling around with the chocolate and then very careful heating of the cream, I think it took an hour and a half. 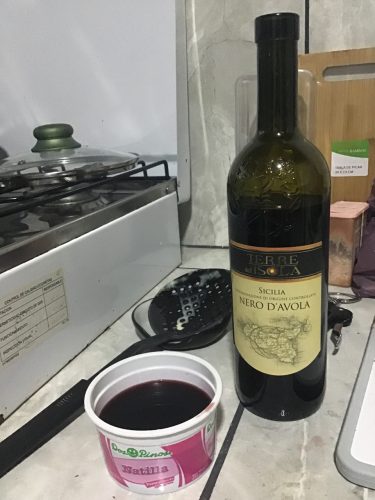 We had purchased the wine before deciding it would be part of our truffles. The bottle was really pretty with an embossing on the glass so I wanted to use it for something special not just an everyday dinner wine. The grape is Nero d’Avola and it comes from Sicily. We’ve tried this wine before but not this specific brand. So we did a little wine tasting to learn more about it. Neil thought it was jammy, dry and spicy. I picked up some fruit in the flavors and aromas and even a little earth and cloves. It was definitely a dry wine, though! I sipped a bit while I was making the truffles and it was almost too dry. Then I had it later on and it was still pretty dry. 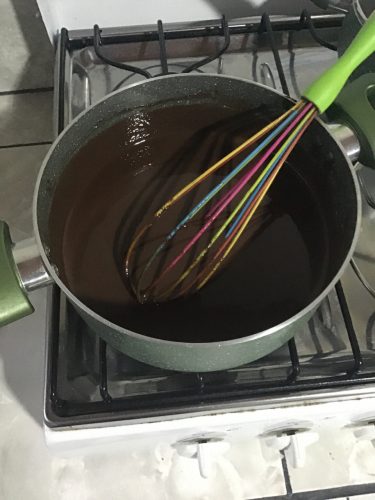 Another important thing to mention regarding the recipe is that step 2 involves waiting for 4 hours and there will be another step where you wait. Be sure you have enough time for all of this! I got a late start and ended up rolling my truffles into balls at 10pm and doing the final step the next day.

Ok so the next set of directions happens once your chocolate mixture has solidified in the fridge. 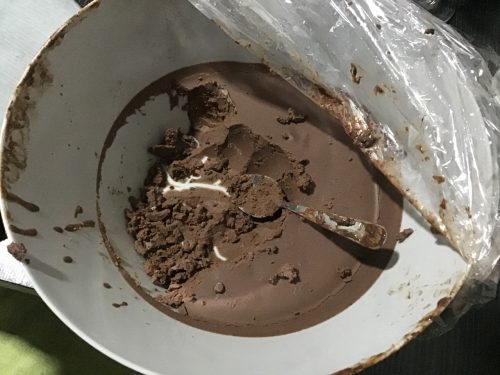 1. Line two large baking sheets with parchment paper and set them aside.

2. Measure 2 teaspoons of the truffle filling and quickly roll it between your hands to form a ball. Transfer to the prepared baking sheet, and repeat with all truffles. Refrigerate the rolled truffles for at least 15 minutes before dipping in the chocolate coating.

3. Remove the chilled truffles from the refrigerator and begin dipping them into the chocolate using a small spoon or fork. Transfer the dipped truffles back onto the baking sheets.

4. Allow truffles to sit at room temperature until set, about 1 hour.

Step one is self explanatory but there is a note on the original recipe that reminds you to be sure you have enough room in your fridge to fit all these truffles. They need to be cold in order to form. 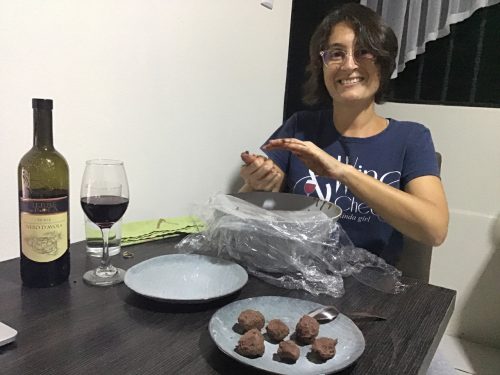 Step two was amazingly messy. I’d imagine that if kids were involved you would just end up with a chocolate coated kitchen! It was also pretty hard to “roll them up”. I definitely just kind of squeezed them to be the closest thing to a ball that I could make. We joked that they looked more like moon rocks than balls. Neil figured it would go a lot easier if you had some kind of scoop. That would have been better than the squeezing technique I was using. Waiting the 15 minutes would have been no problem but I decided to just put them all in the fridge overnight and do the final steps the next day. 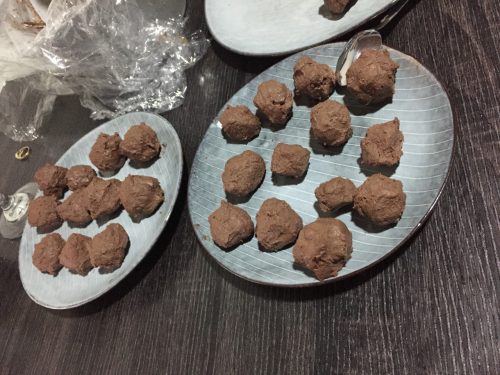 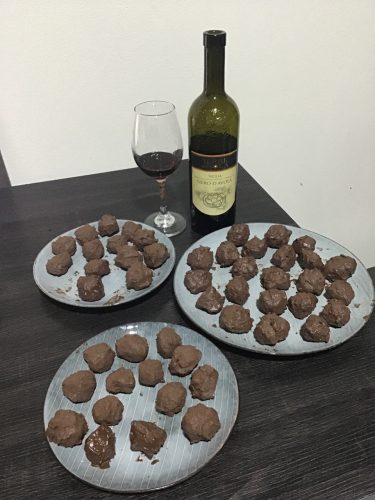 After all that rolling and chopping, I was really excited that I had purchased the cocoa powder for my final coating. I don’t think I would have had it in me to work with a double boiler at that point. We were able to find cocoa powder made by the same company that made our giant bar too so that worked out well. Rolling the truffle in the powder was probably the easiest step of the whole thing, but there were like 50 truffles to work with. 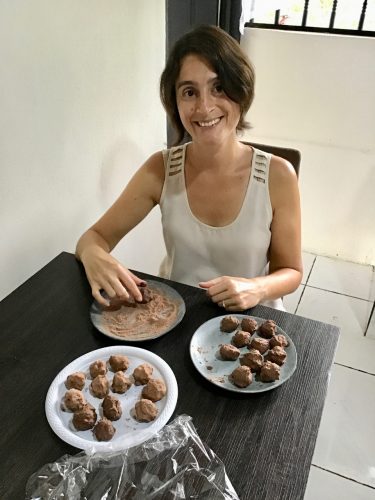 The final step, number 4, was pretty interesting. I was finishing up at the last minute so I was coating the “moon rocks” in cocoa, just an hour before we had to go to our holiday gathering. I did make sure to do a specific set first that I could put off to the side to bring. The first few that Neil and I tasted were pretty hard but the next day, they were so soft and creamy. I think there could be some science that happens as they sit at room temperature other than just warming up.

We had them at the party and everyone enjoyed them. And they were served alongside a Christmas spice cake. All was good and we were so stuffed that we came home and fell asleep!

The next day Neil and I did our “official pairing” of the Nero d’Avola wine with the chocolate truffles. I thought the wine after the chocolate was pretty dry, and the chocolate after the wine was really creamy. I did enjoy the flavor of cranberry that appeared in the wine despite its dryness though. Neil said it was both chocolatey and fruity. I’m guessing that another type of wine could have been a better choice for the pairing but this one worked great for inside the truffle.

Because Neil and I always want to learn everything about what we’re eating, we did another tasting the next day. This time we compared both the chocolates. The first one from Samaritan Xocolata smelled like sweet cocoa and maybe coffee. The flavor surprised me with cinnamon and a dry finish. Neil said it had “very dark chocolate” aromas and a creamy flavor.

The giant chocolate bar from Choco Prisma chocolates smelled like cocoa, earth and berries with a dry chocolatey flavor. Neil said it smelled tart and fruity with a dry, sweet flavor.

To get even more nerdy we tried to compare the truffle to the individual chocolates but I don’t think we really got anywhere with that. The truffle smelled like milk, had a creamy texture and a fruity flavor. All I knew was that it was so good after tasting the individual chocolates. Finishing with the truffle, seemed to tie it all together! Neil said it was “so rich and full of life!” Yeah, we were both having a sugar high.

We continued to eat them throughout the week and I think the best pairing was with our hazelnut hot chocolate one evening. Also I would always try to eat 4 at a time and after my third, I’d be so full. We had some left to enjoy on Christmas and even some to share when we had a visitor here over the weekend. For those of you that have more than 2 people in your house, I’d guess they’d be eaten quickly but it did say that you should eat them all within a week, just as a heads up.

I wonder how they’d come out with a Malbec or a Cabernet Sauvignon? Maybe I’ll try that too, I do have all that chocolate left from the giant bar!

Hope you were all able to find some tasty treats to enjoy this holiday season too! Every now and then we like to do recipe entries like this one so check back again to see what else we’re whipping up in the kitchen. 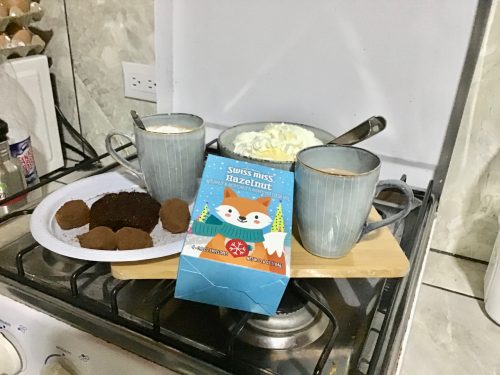