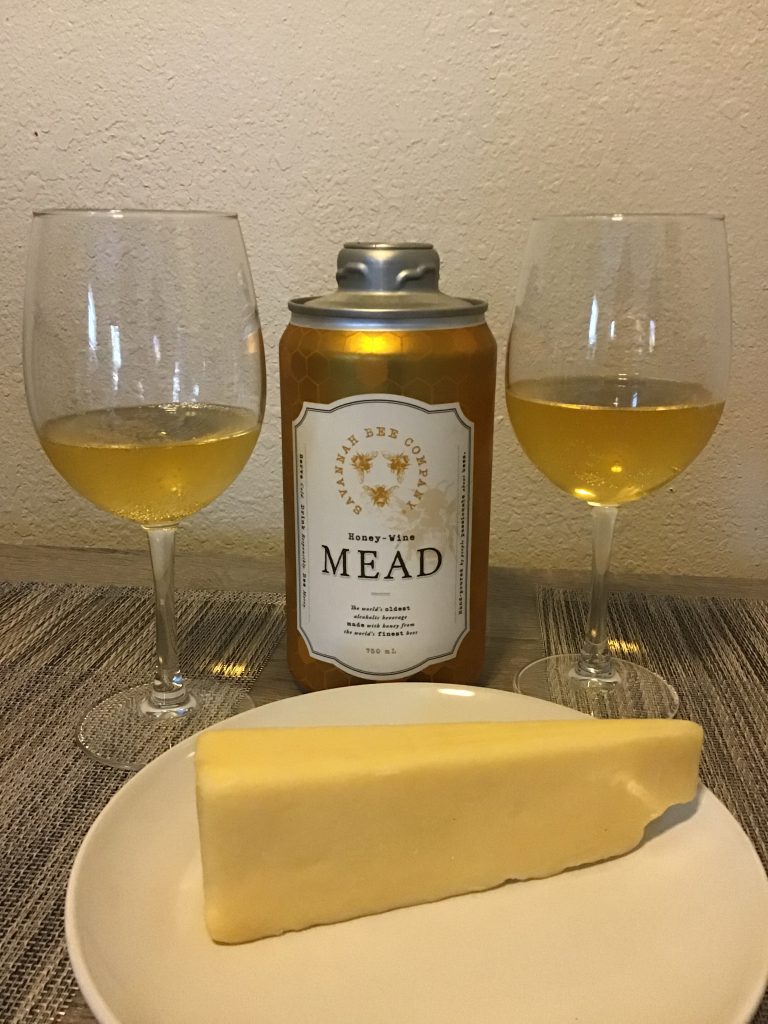 During our time in Colorado, we took a trip out to Downtown Boulder to explore the area. The pedestrian mall area is super cool with street performers, shops, restaurants and Savannah Bee Company. Neil and I are fans of bees and their products so we decided to drop in. There were all kinds of lotions, soaps, candles and in the back of the shop, a mead tasting bar. We arrived just as they were closing up but the lady at the tasting bar let me taste a few samples.

I didn’t know much about mead but I liked that it was called “honey wine” so it made me curious. Some of them were stronger while others were more mild. She suggested that a good “beginner mead” would be the passionfruit, so I called Neil over for a quick taste of that one. Being a store all about bee products, they also carried a honey cheese and I instantly knew there was a Wine And Cheese Friday entry coming together. 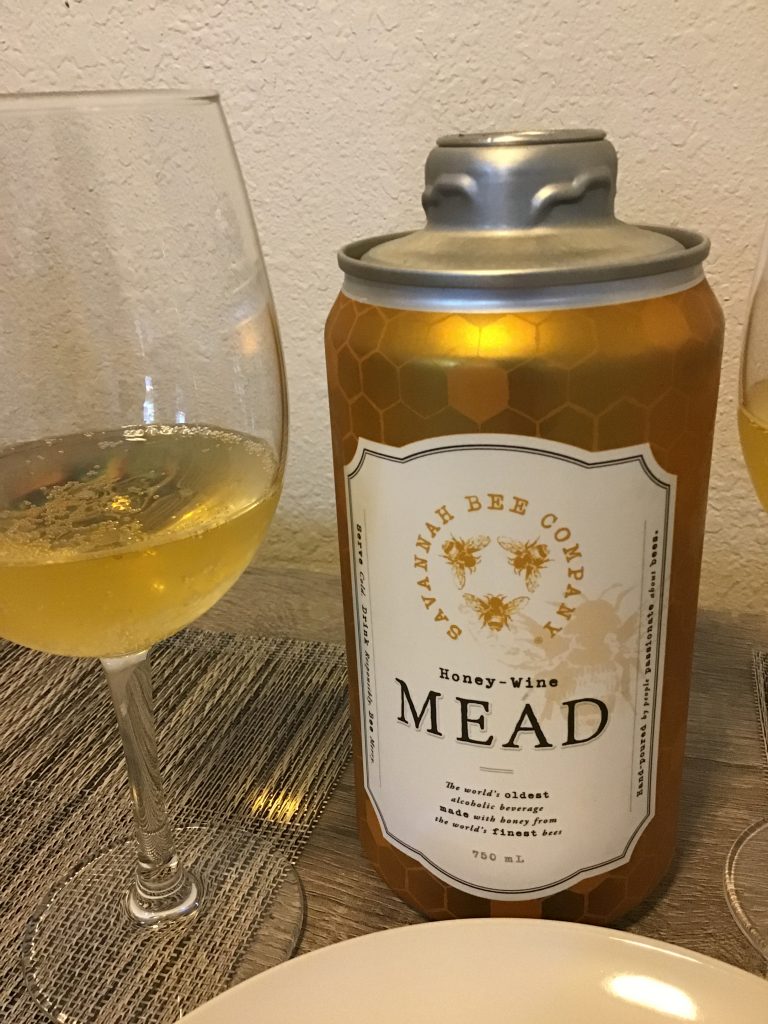 When I poured the mead for myself at home, it was dark yellow with slight bubbles. I wondered if it would taste like beer because I was pretty sure mead was similar to beer. It smelled sweet, a little flowery and a bit metallic from the metal growler. There was also the aroma of bubble gum. I could taste the bubbles and the texture was smooth. It did seem to have the flavor of beer along my tongue and then I called it bubble gum beer! Neil seemed to be having a better experience. He thought the mead smelled like the wines in the Lake Erie wine region, maybe they use the same yeast there? He described the mead as sweet, fruity and yeasty with a honey flavor.

As I looked for aromas in the cheese, I picked up some good milk funk, a hint of tartness and something that reminded me of Swiss cheese. Neil noticed salty and creamy aromas with the slightest bit of honey. The flavors were dry, milky and a little tart but I didn’t find any honey or salt. Neil did however, he said “ there was a pleasant milk flavor with good salt and a hint of honey.” 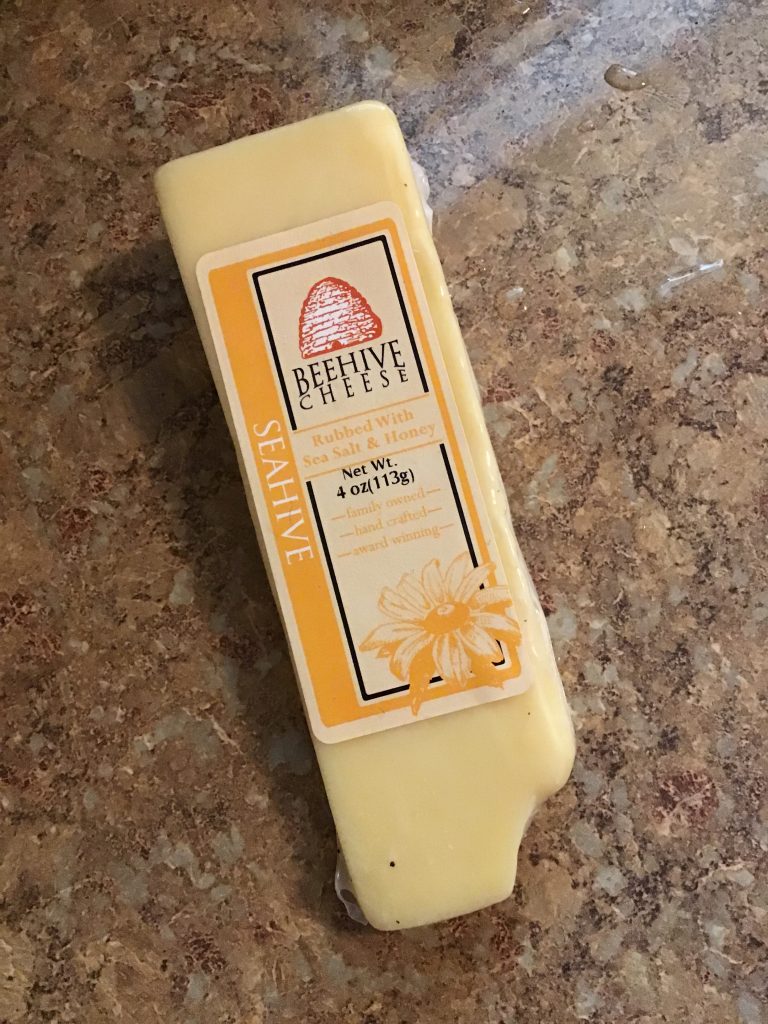 After tasting the cheese, the mead had a floral honey aroma with the same bubble gum flavor that got a little sweeter. I was happy because I only picked up the “beer flavor” in the finish now. It became more like bread, I guess more yeasty. The cheese smelled saltier and tasted more like a Swiss cheese now. Neil found the cheese to become more like a tangy milk but then it switched to honey. He also thought the mead was still sweet but then it changed to salt water taffy. Sounds like his mead and cheese were both having an identity crisis.

Neil enjoyed the mead and cheese both separately and together. He also mentioned that although he would drink mead again, he wouldn’t find it to be a wine replacement. I liked them better together because there was less of that “beer flavor.” I wonder how this mead would taste with bratwurst?

The cheese really didn’t seem all that interesting to me, so I figured I should taste it one more time. This time Neil suggested that I try the rind and to make it a thicker slice. Yes, there was more of a honey flavor now but I had taken a break from the mead. Maybe the honey in the mead was cancelling out the honey? There was definitely more honey flavor in the rind than in the front of the wedge!

So any of you winelovers wondering why it seemed more like beer than wine? Well, mead is made with honey, water and yeast so I guess I relate the yeast flavor to beer. From what I read though, mead is way older than beer (and wine), from those BC times, so I guess beer reminds me of mead 🙂

After reading about how mead was made, it reminded me that we’ve tried another honey drink before called Krupnikas. It’s a honey liqueur made in Durham, NC from a Lithuanian family recipe. We both really liked how smooth it was and all the wonderful spices mixed in. I think I’d prefer that since there was no beer flavor. I really just couldn’t get past that. 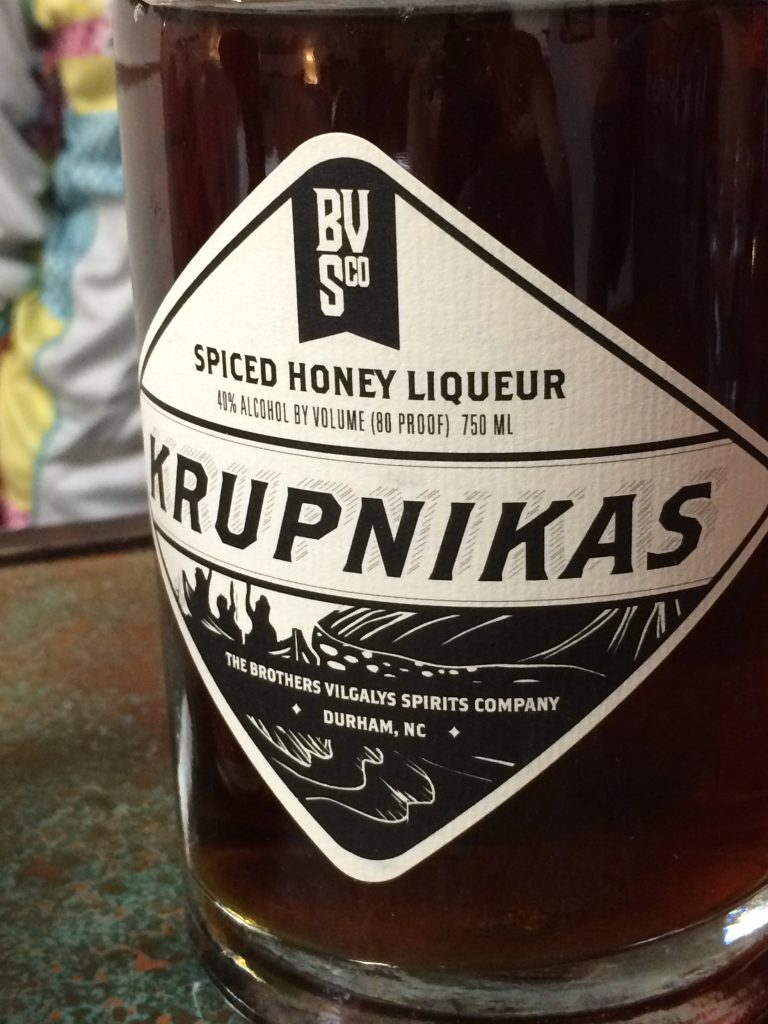