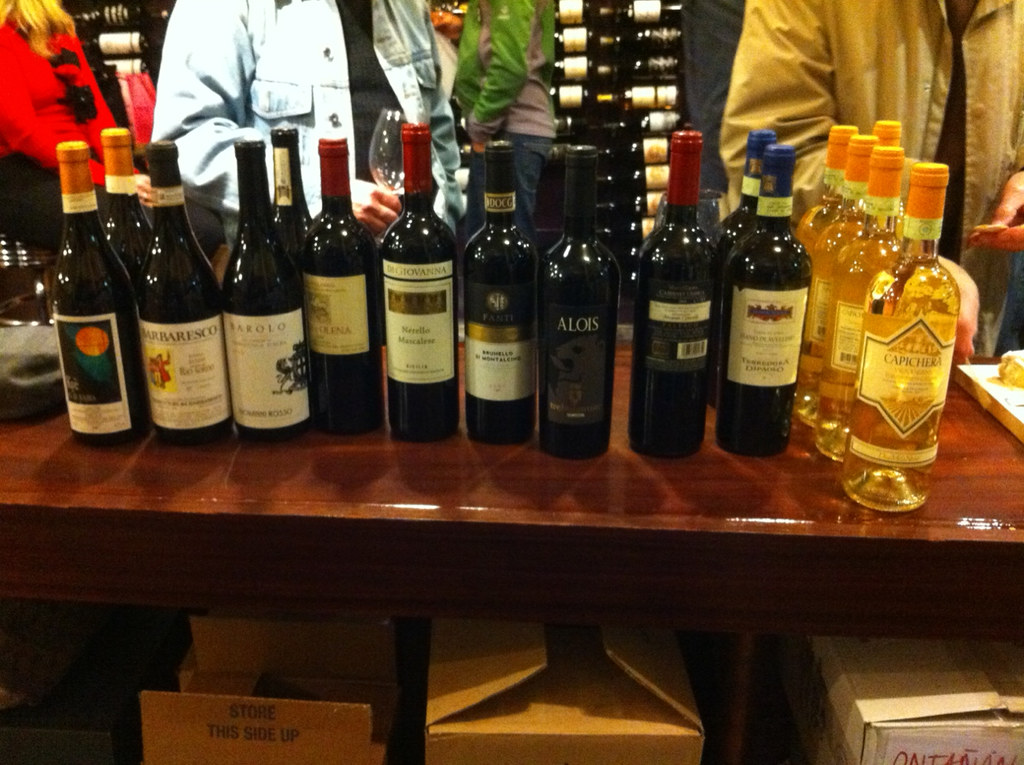 This week we hit the road to taste some Italian wines. We had been to the Wine Club back in July so we figured we’d head over there again. (http://mferraro73.tumblr.com/post/55191187751/trip-to-the-wine-club-7-5-we-decided-to-go-to) The tasting room section of the store is pretty small but the staff is always very helpful, friendly, and knowledgeable!

We are super new to Italian wines so let’s see what they are pouring:

Vanessa was pouring the wines that day and despite the large crowd, she made sure to identify the grapes in each wine and tell us a little about each one. Neither Neil nor I have had many Italian wines so we were pretty excited to get started.

Since there were 10 wines we will not provide tasting notes on all of them. Also, for all you cheesemongers out there, we did have some prosciutto wrapped cheese but did not specifically pair any of the wines with it.

It was great to try out so many new grapes. I had read that there are more varietals in Italy than can be listed. The only two grapes we had even heard of were Sangiovese and our un-favorite Vermentino. Some of the unfamiliar grapes were Fiano, Casavecchia, Nerello Mascalese, Freisa, and Nebiollo. I thought I had heard the wines in Europe were lighter and lower in alcohol but that wasn’t the case with this group.

The white wines were too acidic for us on their own but I’ve heard they work well with asparagus or artichokes. The reds varied quite a bit from light and dry to earthy, smoky or sweet, with a couple tannic ones.

We did have a few favorites that day. I’d say its pretty fair to say we are both into complex wines. The 2011 Di Giovanna Nerello Mascalese, made from Nerello Mascalese grapes, had an earthy aroma and tasted very dry and smooth, with notes of vanilla and cherry. The second memorable wine was a 2009 Vajra Kye Freisa, from Freisa grapes. This one was pretty cool because the aromas reminded me of the Italian cookies, pizzelles, that I used to eat as a child. The flavor was also anise but more like a piece of black licorice candy. It was earthy and Neil simply said it was fabulous! Our other favorite was a 2007 Fanti Brunello Montalcino, from Sangiovese grapes. This one definitely had a lot going on. We noticed blueberries, vegetables and a hint of smoke. It was complex, sweet, and tasty. We were very surprised to find out it had 15% alcohol, since you couldn’t taste it.

It was great to have such an educational experience. Yup, we are a couple of wine nerds. Maybe we can get out to a French wine tasting soon. For the sake of education, of course.