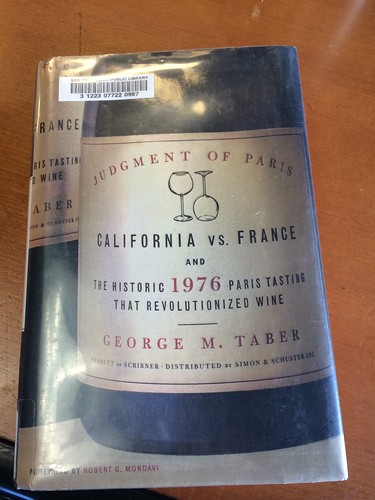 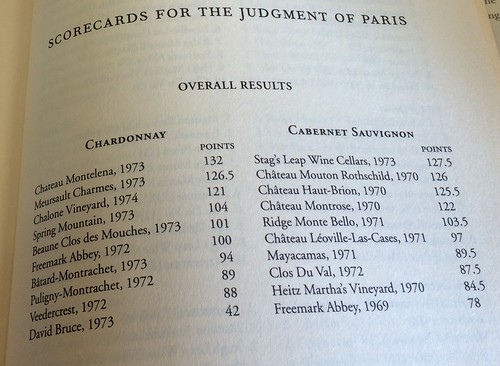 I am a wine enthusiast who loves to learn, that’s what drew me to this field. When I first started out a few years back, I watched about five “wine movies” to get started with some wine knowledge. It still surprises me how much you can pick up when you really want to learn. One of those movies that I always go back to is Bottle Shock. When I saw the book Judgment of Paris — California vs France and the historic 1976 Paris Tasting that Revolutionized Wine at the library, I figured it was worth a read since I already had a loose idea of the story. I never realized I would end up enjoying the book so much that I constantly had to keep taking notes!

There are a few main characters in the book. Steven Spurrier, Patricia Gallagher, and George Taber are those involved in the planning and reporting of the actual wine tasting. Mike Grgich, Warren Winiarski, and Andre Tchelistcheff are the main winemakers, and the big US brands that are involved in the “contest” are Chateau Montelena and Stag’s Leap Wine Cellars.

The book started out with a bunch of US Wine History, which I was especially excited about. Since the Judgment of Paris “revolutionized wine”, many people think US wines were not actively being made until the 1960’s when actually commercial winemaking was first recorded back in the early 1600’s. Thomas Jefferson played a large role in the US wine industry in the late 1700’s. He made wine using some of the grapes that grew natively in the US, vitis labrusca (fox grape) and vitis rotundifolia (muscadine), as well as the ones more commonly grown in Europe, vitis vinifera.

By the mid 1850s, winemaking was booming in California. Charles Krug and Beringer are a couple of the brands started during this time frame. US wines had even started winning accolades in wine contests. During the 1889 World’s Fair in Paris, California wines won 34 awards. The main decline of California wine production was Prohibition, since it was illegal to sell wine. Many of the big wineries fell into disrepair and only a few stayed alive through the fourteen years, mainly by making sacramental wine, such as Beaulieu Vineyard. After Prohibition, America’s taste in wines drastically changed with 81% of CA wine production being sweet wines. One prime example was the creation of Thunderbird, a blend of port and lemonade by Gallo. I found it really interesting to learn that all of the big brands still producing wine at this point had shifted to the sweet wines since that’s what the public wanted.

After all the wine history lessons the book moves into the “history” of the main winemakers lives. It was amazing for me to find out that both Warren Winiarski and Mike Grgich worked at Souverain Cellars and Robert Mondavi Winery and how many times their paths crossed with Andre Tchelistcheff, a major wine consultant in Napa Valley. It was also cool to see how many of the winemakers and grape growers in Napa Valley worked together developing processes to help the California wine industry grow. Warren Winiarski went on to create Stag’s Leap Wine Cellars and the winning Cabernet Sauvignon. Mike Grgich, born Miljenko Grgić, created the winning Chardonnay for Chateau Montelena. He later created the brand Grgich Hills, with the Hills Brother’s coffee makers, shortly after The Judgment of Paris.

There is some French wine history in the book, too. I felt it was more appropriately a wine text book with all of the information in it. There was quite a bit of “story” included, too, so it didn’t feel like “just the facts.” The French wine industry is regulated by a few main pieces of legislation. In 1855, the Classification of Bordeaux divided the main estates/vineyards into growths or crus, depending on importance/reputation and quality. These vary from Premiers Crus (first growths) down to Cinquièmes Crus (fifth growths) for red wines and 3 levels for white wines, Superior First Growths to Second Growths. There was also the 1935 legislation Appellation d’Origene Contrôleé that further divided France into controlled places of origin. This all contributes to how confusing it is for those of us drinking US wines to figure out the names of French wine or the grapes used, but it does help explain it a little better.

The French wines that were included in the Judgment of Paris were widely popular, established names, with a long line of wine history. Aside from those wines, there were some other brands mentioned that would be worth checking out. In the Bordeaux region of France, look for such names as Château Latour, Margaux, Château d’Yquem, and Château Pétrus. For Burgundy wines, other renowned names include Richebourg, Musigny, Grands Echézeaux, Chambertin, Chevalier-Montrachet, Domaine de la Romanée-Conti, Clos de Vougeot, and Côte d’Or. I know I’m interested in experiencing some of their world-famous terroir!

The middle of the book covers the actual Judgment of Paris. Steven Spurrier, owner of Caves de la Madeleine, organized the blind tasting of California and French wines in honor of the bicentennial of the American Revolution. He and Patricia Gallagher, an American wine educator, at Académie du Vin, in Paris, came up with the idea for the event. Spurrier and Gallagher took separate trips to the US to pick out wines for the competition. Spurrier chose French wines that he figured would be well-known to the French judges and would certainly make an impression over the US wines. The event took place at the InterContinental Hotel, just off Champs-Elysées, on May 24, 1976. Although many different wine writers and reporters were invited, George Taber of TIME Magazine was the only one who attended.

The 9 wine judges included people from all over the wine and restaurant industry in France, including sommeliers, magazine editors, restaurant owners, vineyard owners and wine officials. The judges were told to rate their wines up to 20 points total. During the tasting the judges spent quite a bit of time rating the ten Chardonnays, due to the fact that they couldn’t tell the difference between the French and US wines. And coming out on top was Chateau Montelena from the US with 132 points, but you already knew that! During the Cabernet Sauvignon tasting, the judges tried to purposely score the CA wines a low point value and inflated the French scores to not make the same mistake twice. Although once again, after tasting ten Cabernet Sauvignons, with 127.5 points, Stag’s Leap Wine Cellars from the US won.

As the title insists, this wine tasting “revolutionized wines” in the US. It also showed France that there are other wines that can stand up to their tradition and terroir. After the tasting, the French almost dismissed the Judgment of Paris as not ever happening or saying it was just a fluke. There have been a couple rematches of the famed wines: two years later in San Francisco, another ten years later to see how the reds held up, and a third 30 years later. However, the US has still stood its ground. There was even an event called the Wine Olympics in Paris and the “30 greatest wines” sponsored by Jean Claude Rouzaud, managing director of Champagne Louis Roederer Champagne in 1997. These contests all have such an expansive list of wines competing that my tasting list grew by leaps and bounds.

The book finishes out by introducing some of the up and coming wine regions, including such places as Oregon, Chile, and South Africa. I was surprised to learn that Robert Mondavi’s winemaking endeavors didn’t end with his brand in California. He created another brand in California, Opus One, as a collaboration with Château Mouton Rothschild, soon after the Judgement of Paris. Then he ventured into Australia and purchased the land for Leeuwin Estate. The final chapters of the book also include some cool tables showing how the US Wine Industry has grown and developed since the 1970’s.

From the excitement in my descriptions you can tell that I throughly enjoyed the book. As I mentioned it is so full of history, wine brands to look for, winemaking and vineyard stories as well as the Judgment of Paris details, I would highly recommend it. And if you didn’t get enough information from this book alone, there are many other books referenced to continue your wine education. I know I have that list ready to go for my next book to read!