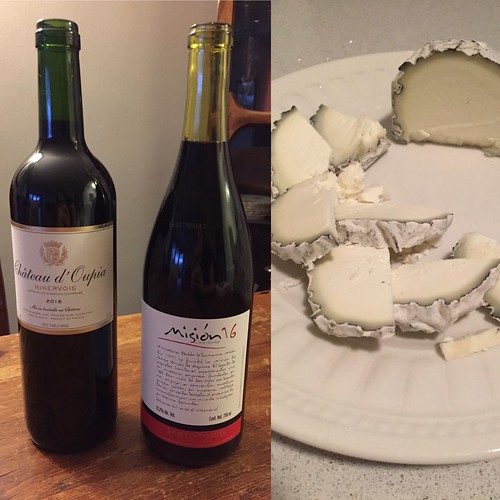 We wrapped up our trip to Chicago by having a bit of an impromptu dinner party with about six people. We had been gathering up some goodies while we made our way around town going from wine shop to wine shop and of course, cheese shops too. Now it was time to try them all out.

While we were prepping the main courses, we noshed on the wine and cheese. It wasn’t much of an official tasting but there was a Mexican wine and some Cannonball cheese. We also picked up a wine that we’ve tasted before since there’d be a bunch of us. You can’t go wrong with a good table red. 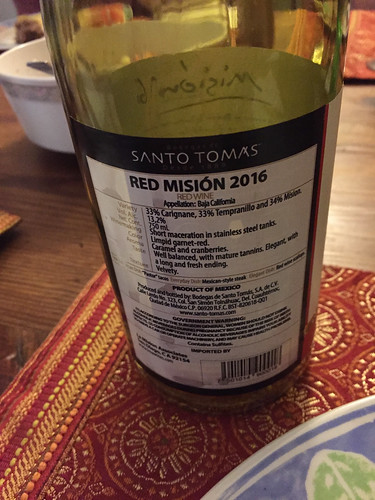 We started with the Misión 16 wine by Santo Tomas, from Mexico. The salesperson told us it would be a good introduction to wines from there so we happily tasted it. Everyone had some notes about the wine so I think it was good choice. Steve called it, “Not bad and kind of shocking!” Neil was impressed by it’s light texture and good flavor, that reminded him of Christmas ribbon candy. I found dry aromas of berries, as well as a sweetness. I agree with Neil that it was a light texture but I enjoyed the spice, tart and dry flavors. With only two people to still weigh-in, this wine was scoring pretty good points. Eric wasn’t sure of it but he didn’t say it was bad. Ryan picked up notes of vinegar but he said this was no insult. He suggested that we pair it with a quinciñera ? He did think the wine improved when paired with the cheese. I agree that it was a good pairing since I noticed flavors of raspberries in the wine. It seems we should keep our eye out for another wine from Mexico. 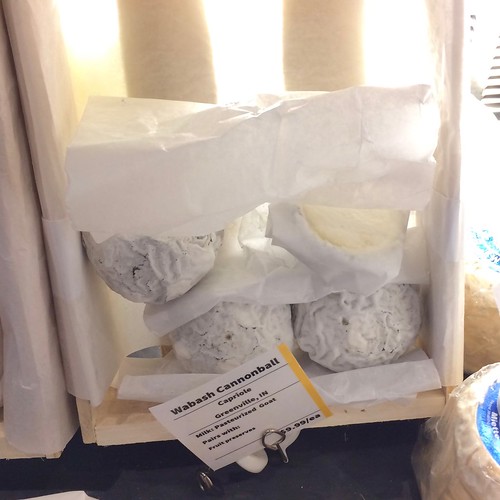 The Wabash Cannonball cheese from Indiana, was round with goat’s milk, ash, and a wrinkly rind. How could we resist picking some up to give it a try? Not to mention it was called Cannonball, how fun. Neil thought it had a good funk on the rind but Steve was surprised it didn’t have more of a punch. I noticed salty and funky aromas, a very creamy texture and a flavor that was kind of buttery and salty. All great traits of a goat cheese!

The wine we had previously tried was Chateau D’Oupia Minervois, a blend from France. Not only does this wine pair nicely with a dance performance, it’s pretty good with “prepwork” too. Everyone that gave me notes called it a “good table wine” but of course, I was more specific. The wine had earthy aromas of dark fruits. The flavor was nice and complex with dark fruits, a dryness and a spice that I could feel throughout my mouth. Although nobody else had much to say about it we all finished it without trying.

Since we were in a greek household, there had to be some feta cheese too. This one was made from sheep’s milk and very salty. We didn’t write much more for notes but it was an integral part of every evening.

We always love trying new wines, especially those from new countries. Have you ever tried a Mexican wine? What about goat cheese, do you prefer it with or without ash? Did you know the ash reduces the acid in the cheese? What will you learn next week on WineAndCheeseFriday? Guess you’ll just have to check back to see! 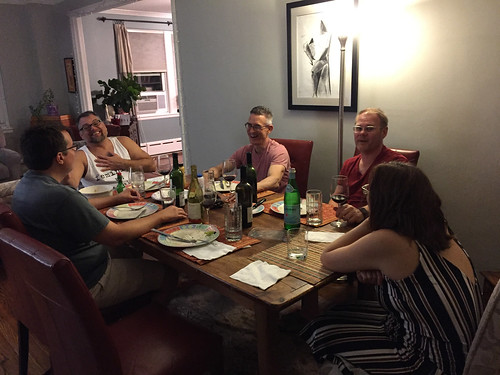