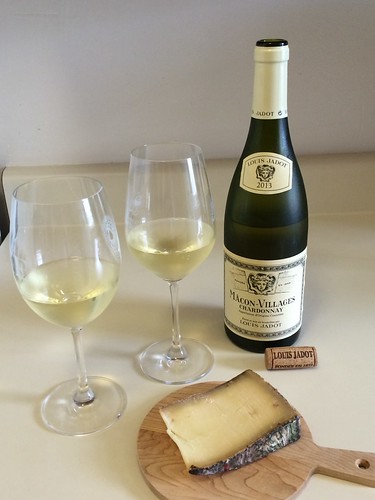 This was our final “Swiss” cheese. Benno said it was another cheese that he really liked in Switzerland but we didn’t have a chance to taste it until after they left. Since it wasn’t a cheese we had heard of before, we took a wild guess that this French Chardonnay might pair with it. This wine is from the French Wine Tasting that we attended at BevMo so we have tasted it before but maybe it’s changed since then. (http://mferraro73.tumblr.com/post/114788359563/french-wine-tasting-at-bevmo-in-order-to) Let’s see how we did with the pairing.

When we tasted this wine originally we really liked it but had no idea what type of varietal it was since French wines were so unfamiliar to us then. I remember being surprised when they told us it was Chardonnay. As I swirled the wine, I noticed a few different aromas, including lemon, maybe banana and some sweetness. Then it smelled tart but continued to change. Neil liked the aroma of the oak, and found citrus and tart apple. Before tasting the wine, I made note of the color. I found it to be very yellow, not as brownish as the Chardonnays I’ve tasted in the past. During my first sip I thought the wine was tart and soft, with flavors that reminded me of apple pie. Then during my second sip it was not as tart initially but then it turned tart with a crisp finish. This wine had a nice complexity alternating between crisp and soft! Neil described the flavors a little differently. The wine reminded him of citrus butter and then switched to cinnamon butter. He thought it was tart and buttery evolving to sweet and buttery. What a fun wine tasting experience!

The cheese proved to be equally complex to me but more in figuring out which flavors/aromas I was able to identify. I knew the cheese had a bold aroma immediately after opening the package. It took me down a kind of strange path of memories. First, I thought it kind of smelled like wax or paint, then, it sparked a memory from a Science Experiment, which made me think it might have been one of the bacterias that I used in the Microbiology lab. Finally it came to me, the aroma was similar to agar in a petrie dish. What a strange turn of events to think of the aroma! Neil found aromas of hay, barnyard, wood chips and salt but said those were the flavors he identified as well. I also noticed the flavor of barnyard, a hint of smoke, a medium texture, and lasting flavor. We both enjoyed this strong but pleasant, flavorful cheese.

As we paired the Chardonnay and Le Maréchal Emmi, I noticed the wine to smell more astringent. At first, the wine seemed to have no flavor but then the funk of the cheese came out more and the tartness of the wine increased in my throat. I tasted a piece of cheese after this and there was more of a butter flavor in the cheese. Neil found the tartness decreased in the wine and the butter increased in the wine. He also made note of the cheese having the hay and salt flavors enhanced, therefore he found the cheese to pair well with the wine. I thought the wine and cheese were better separately and Neil said the wine wasn’t as interesting with the cheese. We think it might have been better to pair this cheese with a Pinot Noir, to have both a wine and cheese with a funky barnyard flavor. Perhaps they would have balanced each other better? Or maybe we could have done a heavier wine? What a great chance to try another Swiss cheese and keep us on our toes with WineAndCheese pairing!