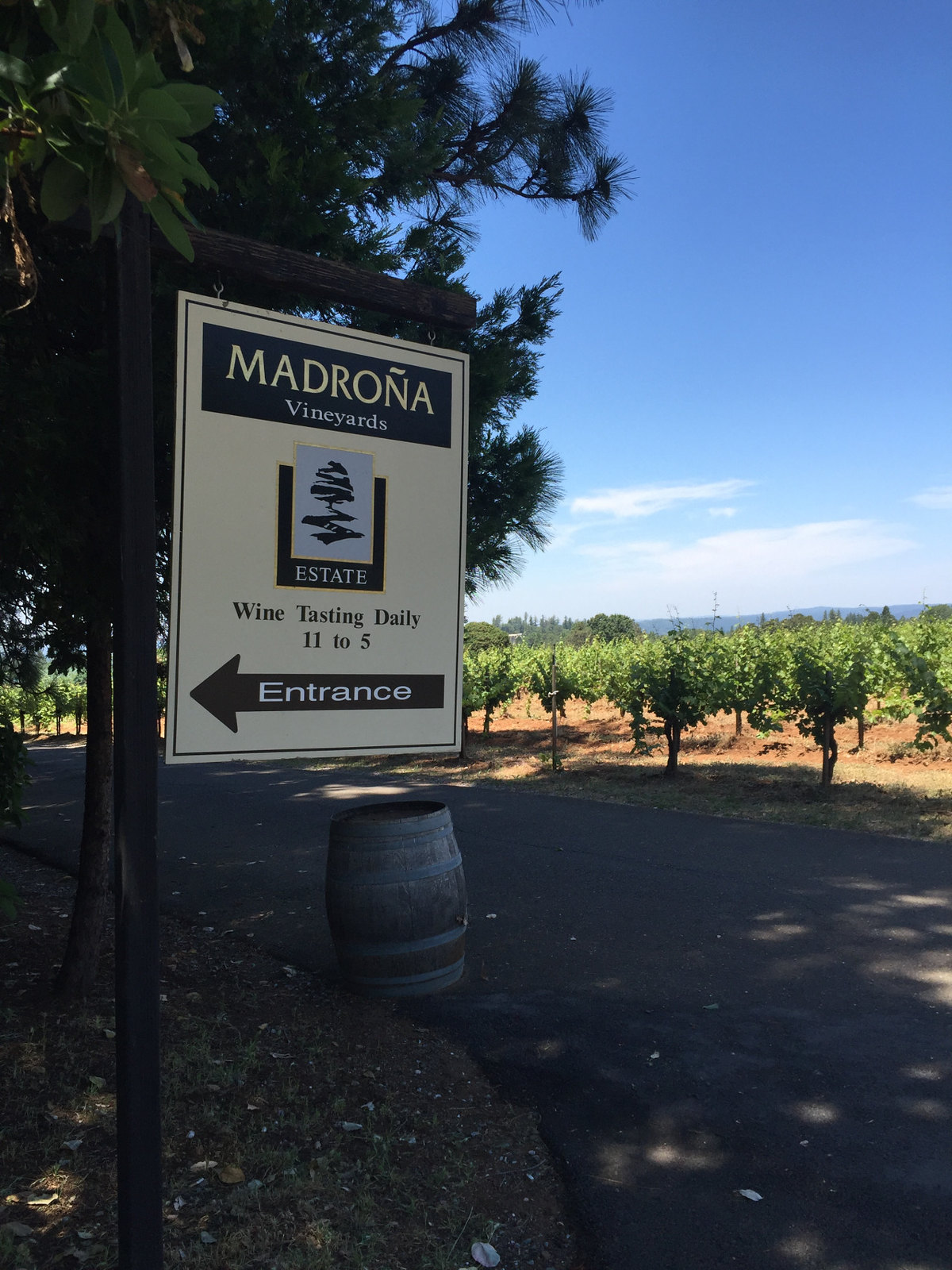 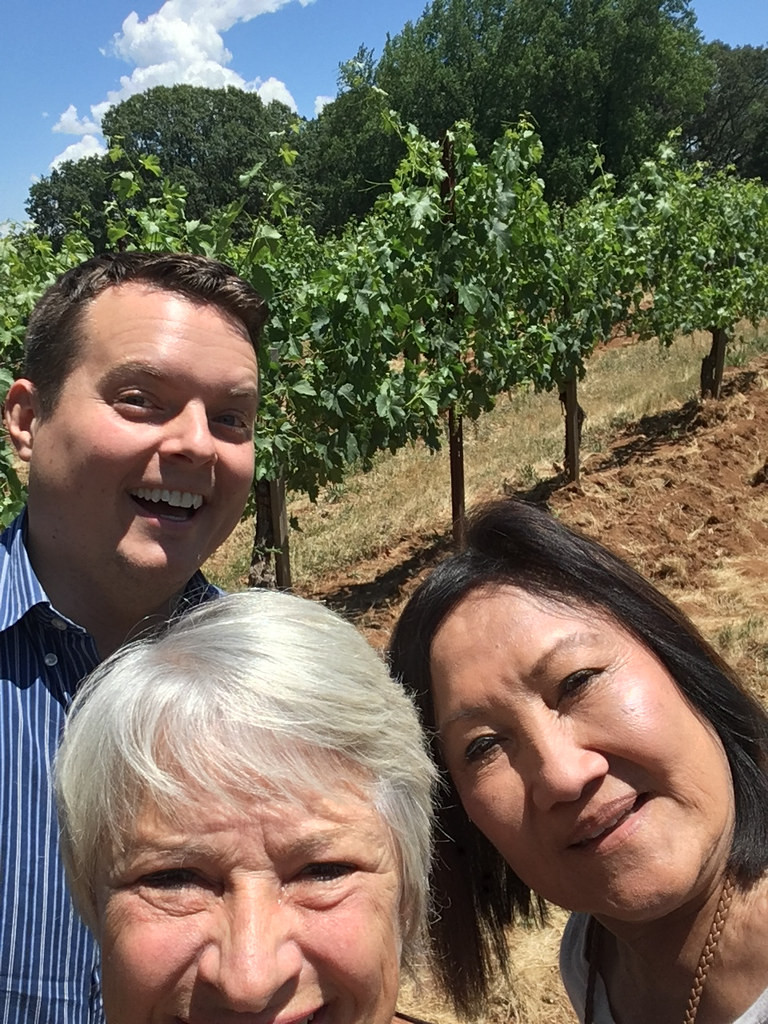 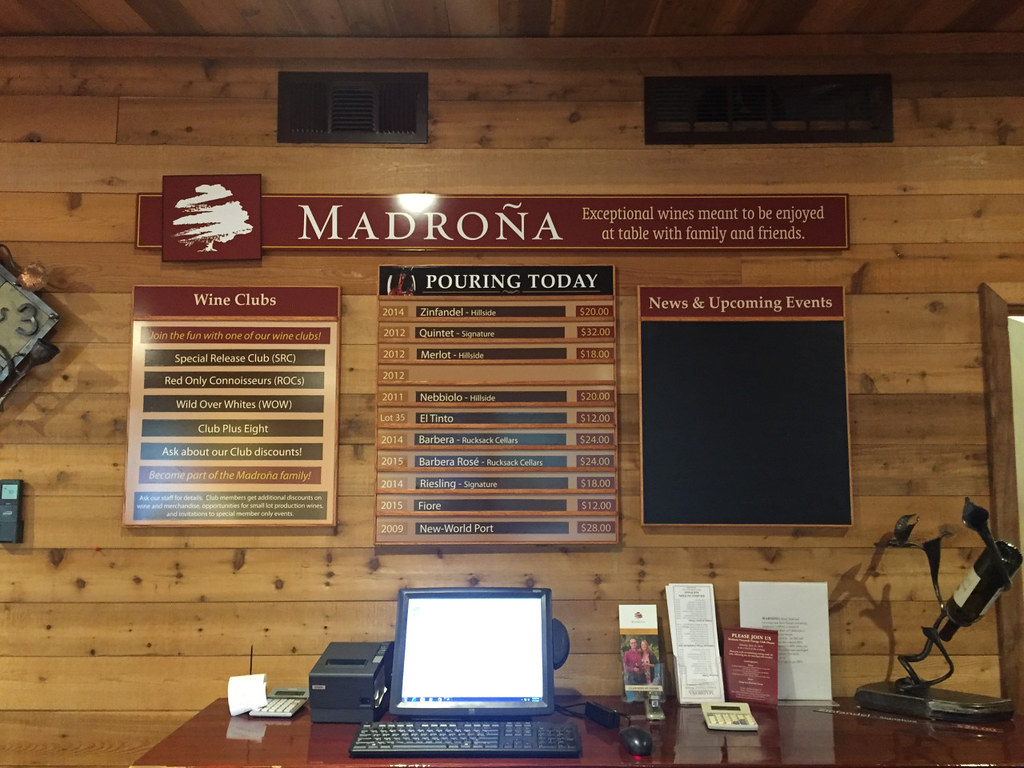 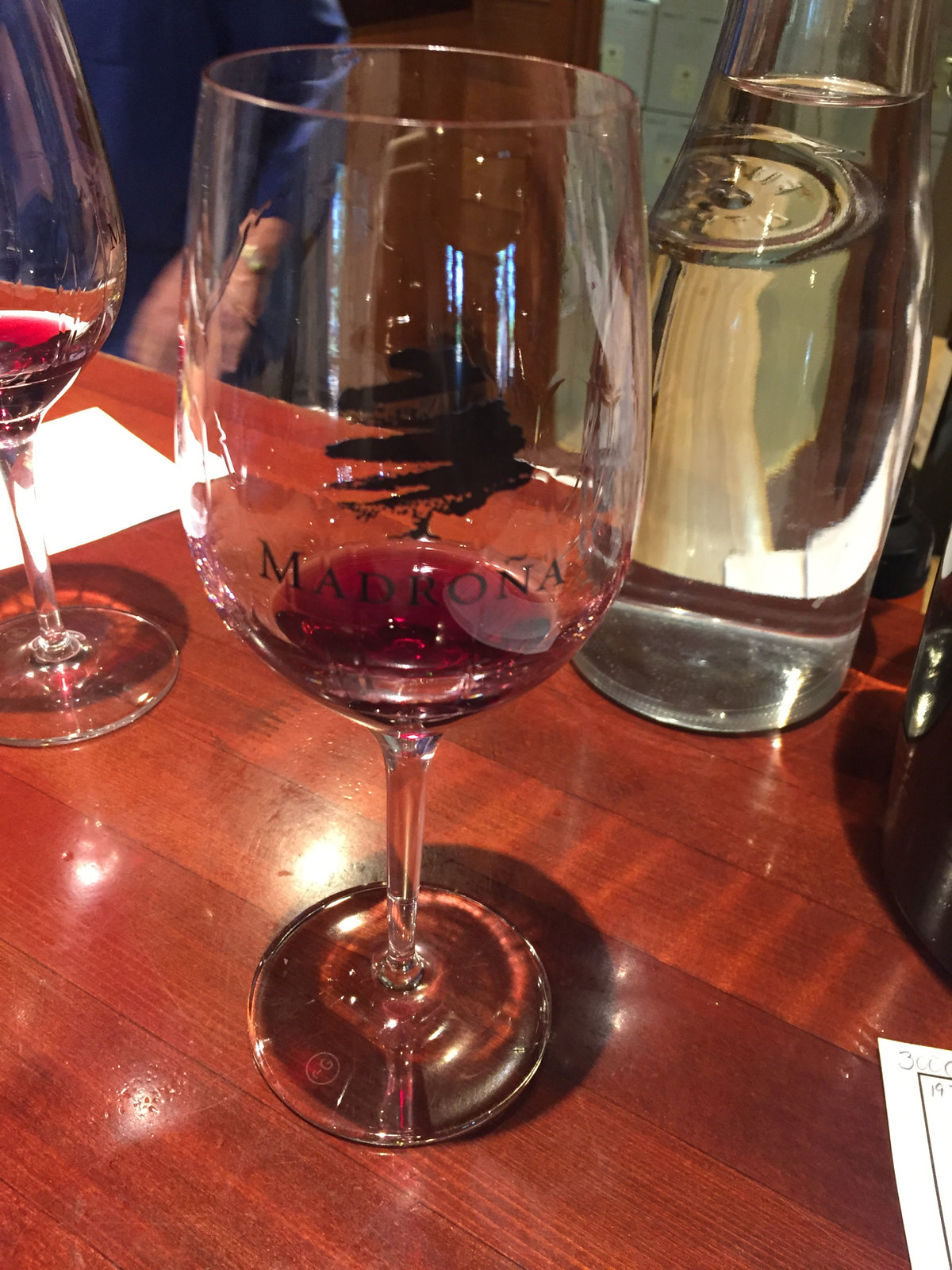 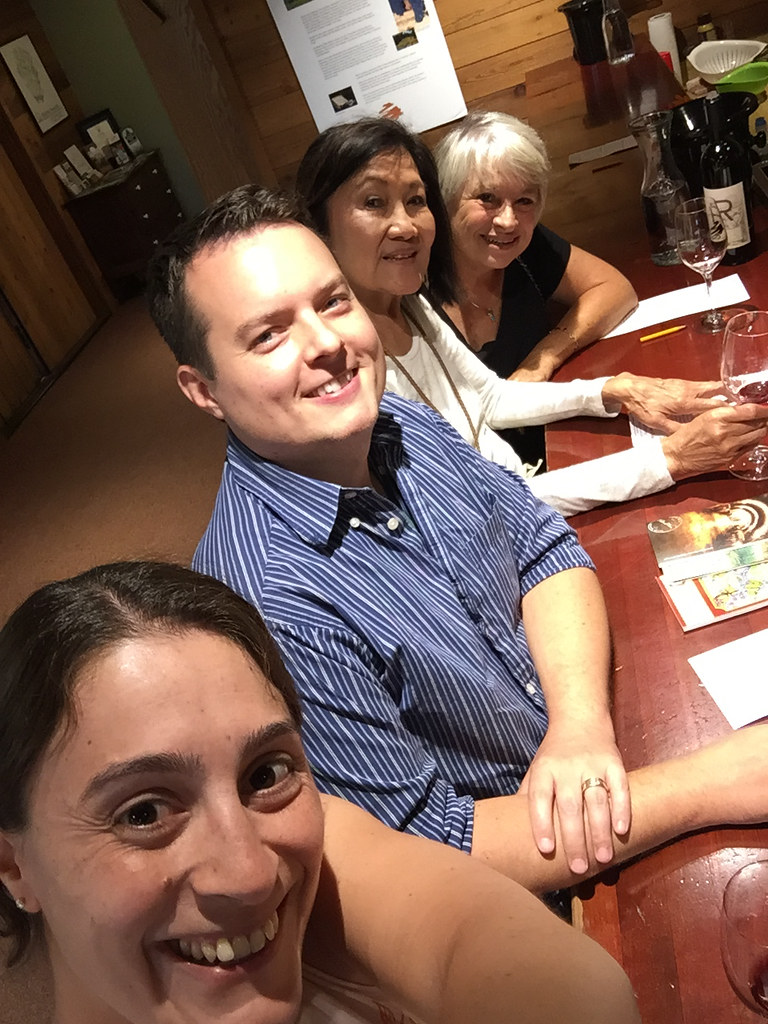 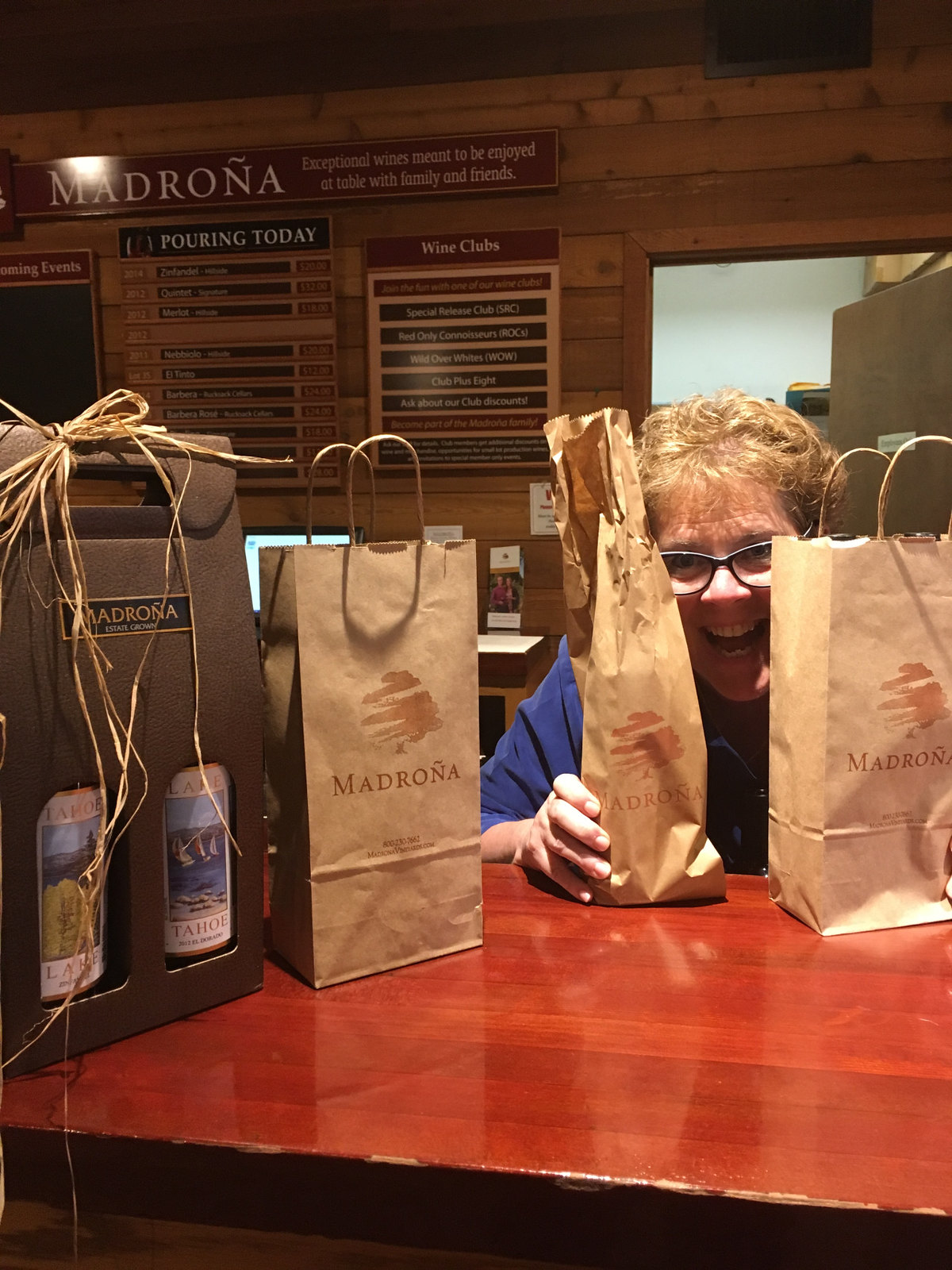 It was scheduled to take us 6 hours to reach our place near Yosemite National Park from Truckee, CA, so we figured there must be a place to go wine tasting around the half way point. Then we found Madroña Vineyard in Camino, CA. (http://madronavineyards.com) We were with some friends who share our love of wine, so I wanted to find a vineyard where we could all have the entire wine experience. It was a little confusing when we saw the apple orchards and christmas trees on the way there, but then we found signs pointing us to Madroña Vineyards.

Camino, CA is located in the Sierra Foothills of El Dorado County. This would be a new winemaking region for us to explore so I was on board. Our tasting room representative, Lynne, was super helpful pouring wines, giving us restaurant suggestions, and finding new and fun facts in her book about the wines. She told us Paul Bush is the winemaker and that he is in the process of opening another brand called Rucksack across the street. The Madroña brand has been around for over 35 years and they do the entire grape growing, wine making, and bottling process at their facility.

The wine tasting was complimentary and boy did we taste their portfolio. Here’s the list of wines we tried that day:

During most wine tastings, I fall behind the rest of the group since I’m taking such detailed notes. This time was no different! We all went through the wines, making whatever notes we felt were relevant.

We were fortunate to taste 2 side by side comparisons, first with the Hillside and Signature Zinfandels, then ending with the 2005 & 2009 New World Ports.

We all like Zinfandels so we had a bunch to say about these 2 wines. We tried the Hillside Zinfandel first and Josie was excited since it burned on the way down! Pam said it was dry and heavy and was convinced that she should buy some. I noticed earth aromas with dark fruit and pepper flavors. Neil noticed spice aromas and flavors, and thought the wine was fruity and dry. When we tried the Signature Zinfandel, Pam thought this one was light and bold. I found berry aromas and thought this wine was dry but had more berries than the first one. Neil said it had a fruity spice, maybe cherry cola and thought this one was bolder.

With the comparison of the 2 ports, we were all wearing a little thin, 14 wines in, but we did manage to write some notes. One thing that Neil just reminded me was that Madroña also makes their own brandy. The 2009 New World Port has brandy added during the fortification process and both Neil and Pam picked up the brandy flavor. It’s even more special, knowing that was made in house too! I thought this wine was dry, sweet and tart and there was no question that it was a port wine. Neil found it to be too sweet but he did like the brandy flavor. The 2005 version was much smoother so Neil and I both liked it better. I loved the creme brûlée aromas and Neil thought it was sweet and strong like a proper port should be.

We definitely all identified our favorites, considering that we purchased 8 bottles in our group but I’ll give you some highlights of the remaining wines. I found a lot of the wines in the beginning to be dry but we were told that these were food wines so it might have been completely different if I were eating dinner. When we reached the Lake Tahoe Zinfandel, I noticed the wine to be softer and lighter than the wines leading up to it. I also really liked how it smelled like lavender and fruit, so much that I guess I yelled out my notes. Sorry everyone!

Neil found the El Tinto-Lot 35 to be a solid table wine and he and I both identified red fruit flavors and aromas. Josie thought this was a good one too and bought two bottles.  Neil and I both enjoyed the richness of the Quintet, a Bordeaux blend, as well. Josie was happy to identify the “burn” when she drank the Nebbiolo and Neil thought it was “pinot-ish” as well as spicy, super dry, big and bold. It seems we could have purchased even more wine that day if we weren’t on the road with an already packed car!

I think Neil and I were in a summertime mood while we were tasting because there were two rosés and two whites that kind of stuck out too. Both rosés really kept us guessing because if we were doing a blind tasting we would have called them white. Neil thought the Barbera Rosé reminded him of a Sauvignon Blanc, super strange considering the typical flavors of Barbera wines. When I tasted the Barbera rosé the aromas reminded me of tart and ash, very interesting! Similar to the Barbera rosé, the Zinfandel rosé had flavors and aromas out of the ordinary for what we’d expect. We really wanted to taste and analyze it more, so we got a bottle. Neither Josie nor Pam were really into rosés so they skipped these wines.

The two white wines, Dry Riesling and Fiore, were poured at the end of the tasting. I don’t think I’ve ever seen that before but Lynne explained that it was due to the terroir producing acidic reds and how that would change the tasting experience. Neil and I both gave the Riesling good reviews but we don’t purchase that grape all too often. The wine was tart and crisp with honeysuckle, golden crisp apple and a kiss of oak. The Fiore was also pretty nice with melon, floral and sweet aromas and a flavor profile to match. If I were having a party, I’d grab a bottle to share with others. I couldn’t drink more than a small glass of it, though.

As you can tell from our tasting notes, we all really enjoyed our impromptu stop to Madroña Vineyard. Thanks to Lynne for such a fun experience and to Dave and Bernadette who were tasting wines next to us that day for a great lunch recommendation in Placerville, CA. After all that wine, we were ready for a good meal! If we are ever in that part of California, I think we’d check out some of the other wineries, there were actually quite a few nearby! (http://eldoradowines.org)