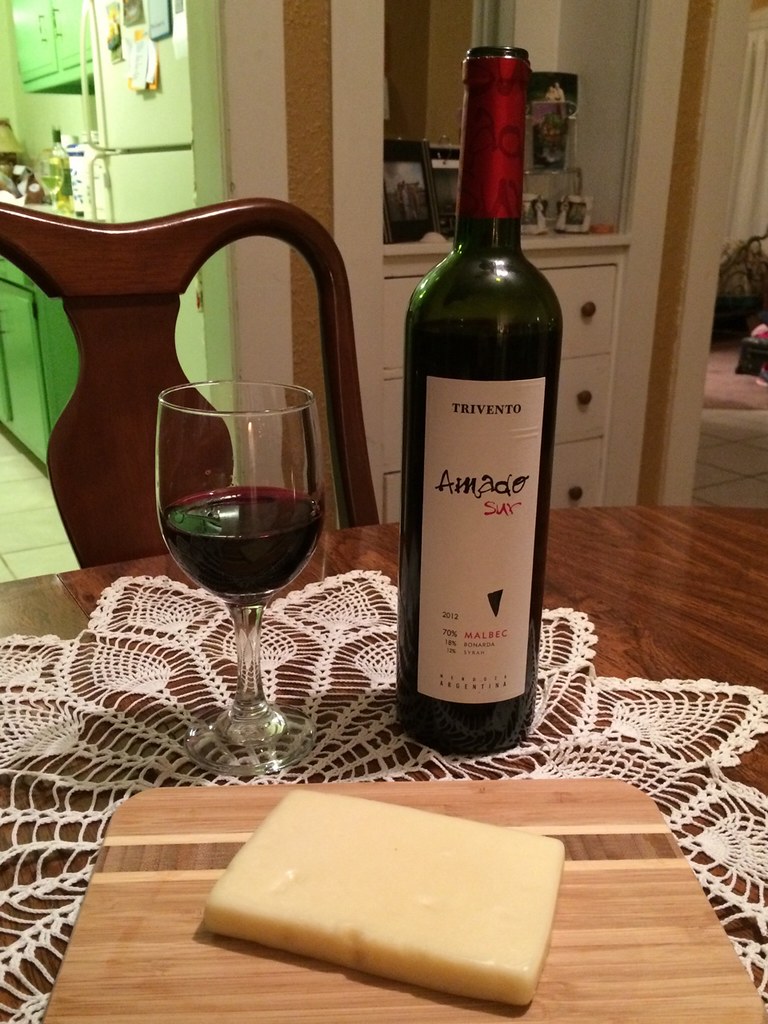 We know how much Linda, Neil’s mom, enjoys wine so we did a second WineAndCheese while we were with her in Florida. That’s what we’ll be discussing today. The wine of choice: Malbec. For some reason, it is not one I see all that often in California so I wanted to get a better idea of the characteristics of this type of wine.

Upon first taste, we were all convinced this was a DRY wine and most likely one that was higher in alcohol. I could smell the alcohol and Linda said it burned on the way down. We identified a smokiness, spice, some blackberry fruit, and possibly charcoal or graphite. Perhaps it would have been better with some type of a beef dish? As a sipping wine, none of us really liked it.

We moved onto the Fontina cheese to see what this might taste like? It’s another unknown for us but we do love the discovery of new foods! Neil decided to try out a new technique when slicing the cheese. While we were in Italy at the Luigi Guffanti Cheese Cave, http://mferraro73.tumblr.com/post/82455563549/wine-and-cheese-friday-a-trip-to-a-cheese-cave, we learned that some cheeses are better when cut into very thin slices. Apparently, that is true for Fontina, Neil found there was so much flavor in the little slices! I know, you are waiting for the actual flavors we noticed. Neil tasted the characteristic “cow milk” flavor, along with a grassiness. I thought it was tangy and smoky but also smooth. Linda described the texture as creamy and similar to mozzarella. We all gave it high marks for flavor and texture!

Well after the mixed reviews between the wine and the cheese this should be an interesting pairing. Linda was happy that the cheese smoothed out the wine enough to actually taste the wine. I’d say that is similar to my reaction, the wine was lighter with minerals and some noticeable fruit. Neil enjoyed the burst of flavor that appeared during the Malbec and Fontina pairing and identified spice and smoke. According to him, it was a great pairing! I’d say Linda and I felt the cheese helped the wine but we’d probably both prefer just to “nosh” on the cheese by itself.

As a point of research, I decided to find out why I don’t see many Malbec’s here in California. This article gives a good summary about the state of Malbec in California, http://www.steveheimoff.com/index.php/2013/09/05/malbec-in-california-mixed-bag-emerging-story/. It is a popular varietal that tourists request at work, so I’ll continue the “tasting research” to decide what I can suggest that would be similar.