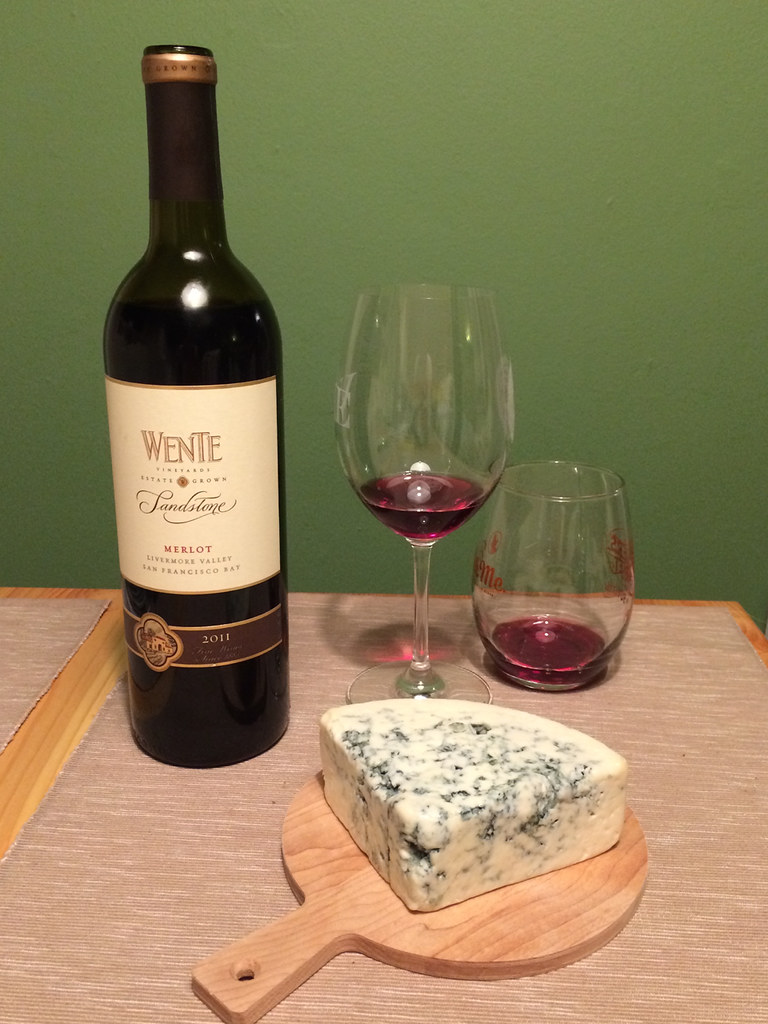 We purchased this Merlot back in June when we visited Wente Vineyard, http://mferraro73.tumblr.com/post/88717310148/trip-to-livermore-part-one-its-been-over-a. Neil and our friend KerryAnn really liked it but I didn’t have a chance to try it that day.

Merlot has received such a funny perception due to the movie Sideways, many people think it’s bad. It is a grape that has been used for winemaking for a very long time in France so I’m not sure why the movie decided to portray it this way.  It’s also hard to find in California due to the movie. Check out this article for more Merlot discussion. We chose to pair it with a blue cheese because Neil told me this wine had a sweetness to it.

As Neil swirled the wine he could smell plum, a light spice, wet stones and the woods. It reminded him of standing in the creek back in Pennsylvania. Pretty cool! I didn’t find the wine to be very aromatic, only being able to identify a hint of blackberry and maybe dust. When I tasted the wine I did notice some vanilla, berries, a tartness and a light texture. Neil found cassis and sweet plum flavors and described it as semi-dry and “puckery round.” He really liked it but I found the finish to be too light and wished it was a more flavorful wine.

This blue cheese, from Trader Joe’s, didn’t have much of a description, just “cave-aged blue cheese.“ We both agreed that it had that token blue cheese smell and taste that we enjoy. The texture was also very nice; creamy and crumbly. The flavor was tart and it smelled funky. We found it to be a nice cheese all around.

When we paired the Merlot and Blue cheese I noticed more flavor in the wine, the cheese sweetened, and some richness occurred but it all happened so quickly. It was hard to identify all that was happening. Neil felt the cream and fat from the cheese came out to cause a flavor similar to cranberry Stilton. He said it tasted awesome! Neil thought the wine, cheese and pairing were all good. I thought it was a tasty cheese and an interesting pairing but I wished the wine was heavier. I won’t be swearing off Merlot though, just looking for a more complex one next time.