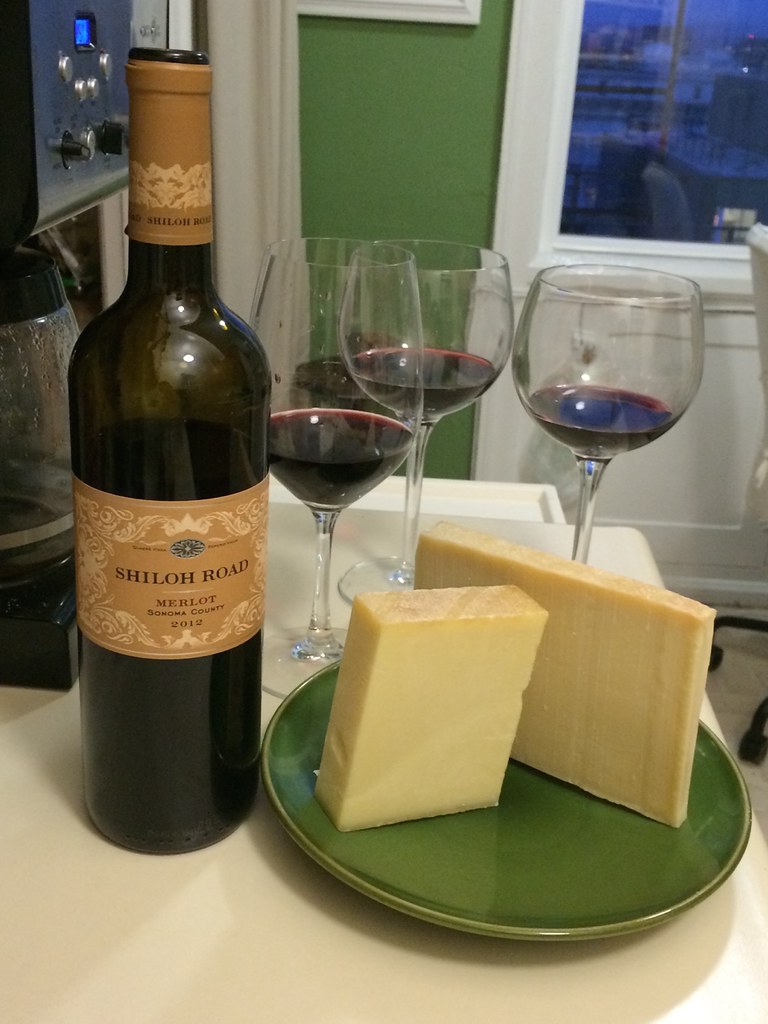 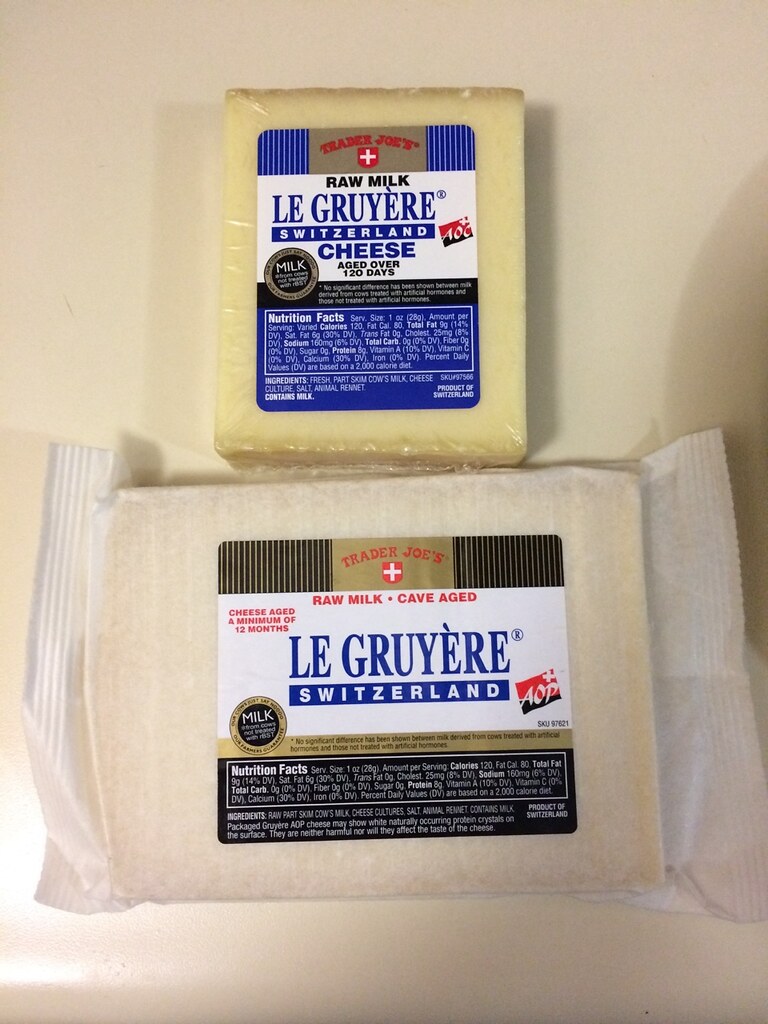 After reading the Sparkling Sauvignon Blanc and Emmentaler entry, http://mferraro73.tumblr.com/post/121356608301/bodkin-blanc-de-sauvignon-blanc-and-emmentaler, maybe you wondered if Benno, our dairy farmer friend, would share some other cheese knowledge? Well you are in luck because this is the second entry featuring our Swiss friends with more Swiss cheese! Neil and I were both excited when they brought us both a young and aged Gruyere cheese so we could taste the difference. What a great idea for WineAndCheeseFriday. They knew the cheese better than us, although we have had a couple Gruyeres* in our time, so we asked what type of wine would pair well with both cheeses. It seemed a Merlot, not being too heavy or too light with a smooth taste should do the trick.

We did this pairing “backwards” (cheese then wine) because we wanted to be able to taste the intricacies of the two different cheeses. Benno was excited to share Gruyere with us because his farm is located in the region of Switzerland that is allowed to produce Gruyere cheese. His farm has cows that produce milk that is then used for making Gruyere. Using Google maps, he even showed us how close the cheesery is where they bring the milk, a great virtual experience!

Benno told us the first cheese to taste should be the younger Gruyere. For those of you looking at the photo above, the young cheese was the smaller piece with the more yellow color to it. Benno and Nora both agreed that this cheese, from Trader Joes (http://www.traderjoes.com), was true to a cheese they would get in Switzerland. When I smelled the cheese, I noticed a light funky aroma. As far as flavors, Nora found the cheese to be salty and creamy and I thought it was smoky and funky. Neil described the cheese as dry and powdery but more as the taste not as the texture. I also thought the flavor of the cheese went into the tongue and almost interacted with the tongue. There was definitely a lot of flavor! Benno found the cheese to have more smell and initial flavor instead of a long lasting flavor. And finally Neil and Benno both were reminded of springtime with this cheese, in the aroma and the flavor.

In order to compare we tried the aged Gruyere next. When looking at the picture, the aged cheese was the larger piece that had “crystals” in it. Once again Benno and Nora agreed that this cheese, was true to an authentic Gruyere from Switzerland. We were all looking to discover the differences between this aged cheese and the young cheese we tried before. Nora felt the aged cheese had a stronger aroma which I agreed with once I held my piece a little closer to my nose. This cheese was definitely crunchy, thicker, more firm, heavier and dry. I felt that it coated the tongue more than the young cheese and Neil agreed that the bigger taste stayed in your mouth. Benno found this aged cheese to have less of a smell but more of a flavor, as well as, adding that it had a strong finish. Nora even noticed the salt flavor in her throat. Although there were some bursts of flavor with this cheese, we all found the young cheese to be more flavorful. This surprised Benno and Nora because they expected the aged to be stronger than the young.

Once we were through with our cheese detective work, we moved onto the wine. I made note of the very dark purple color of the wine to start and Nora picked up on the lighter colored outer ring, thinking that the wine could be slightly aged. We all noticed a variety of fruit aromas including berry, plum, blueberries, red berries and pepper. It seems we all noticed something a little different about the wine flavors. Nora felt the wine had an initial sweetness to it and light tannins. Benno didn’t find it to be sweet but instead said it was peppery and acidic. Neil picked up an earthy spice and cassis flavors, while I agreed with the spice but added in blackberry flavors and a dry finish. Nora didn’t think the wine was full bodied and also noticed it to be a bit flat. She wondered if we somehow “killed the wine” by tasting the cheese first? I also made note of the wine smelling “chalky”, perhaps we always need to taste the wine before the cheese?

Well on to the first pairing, Merlot and young Gruyere. I found the wine to have more flavor and the cheese to be more salty than before. Neil, Benno and Nora all felt like the cheese died, having no flavor. Strangely though, after the third bite of cheese, the cheese flavor lingered for a long time. They also noticed the wine to have less tannins. It seems we should have paired this cheese with a lighter wine. We’ll know better next time.

Although we found we may have short-changed the Merlot by initially tasting it after the cheeses, it was lots of fun being able to compare two versions of the same cheese. Maybe a better option would have been to only compare the two cheeses without a wine?After we reviewed all of our notes Nora decided she didn’t like the wine when it was by itself. Neil agreed and found the wine to be better when it was paired with the cheeses. I found it was hard to decide whether I liked the young gruyere or aged gruyere better but I think it was the young Gruyere. I guess Benno didn’t have a final opinion, he was too busy handing out cheese samples to all of us. Another fun WineAndCheeseFriday with our Swiss friends!

* here are the links to our past Gruyere pairings: