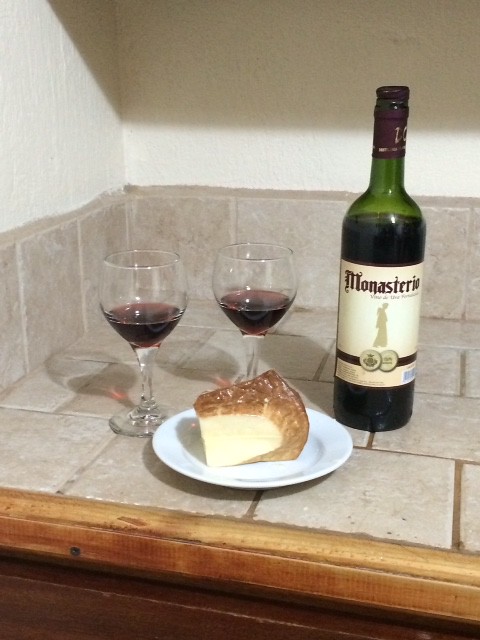 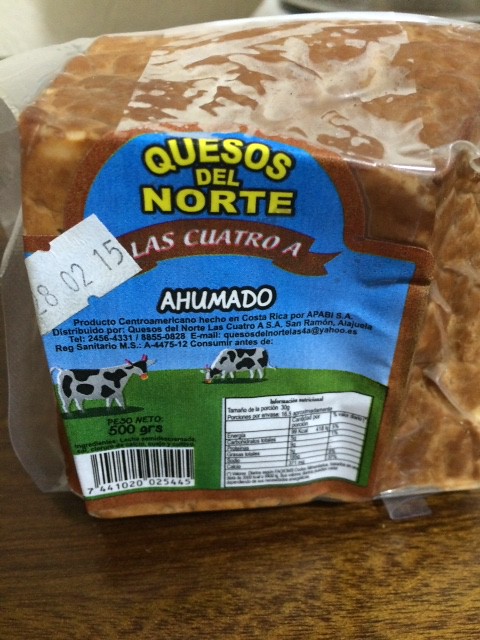 This is our first week in Costa Rica! We figured it was appropriate to find some Wine And Cheese from here to discuss…when in Rome! On our first day here we headed over to the MegaSuper in order to see what was available. There were definitely some familiar American wines here but we wanted something authentic. Without any real idea of what we were buying, we chose the Monasterio Vino de Uva fortalecido and Quesos del Norte las cuatro a Ahumado.

We started by noticing some differences with the way the wine bottle was closed. It had a sort of plastic stopper in it instead of a cork or screw top. As soon as we opened it we could tell it would be sweet. The color of the wine was a little on the lighter side and it had aromas of sweet prunes, cassis, sugar, alcohol and a hint of chocolate. The flavor reminded both of us of jam and I found it to be a little tangy, juicy and a slightly thicker texture. Neil identified quite a few flavors including sweet cassis, cinnamon/chicory and it reminded him of either mulling spices or a sweet/spicy fireball. Overall really too sweet for us but definitely worth trying.

Now onto the cheese. From reading the package, we really couldn’t tell what type of cheese this was going to be but it looked the most “artisan” of what was available in the store. Once again, as we opened the package, we were hit with a dominant aroma, this time smoke! It was so strong, you would have thought we opened a package of bacon. It seems obvious to mention but the aroma was smoked meat. I noticed flavors of ham and salt, and it reminded Neil of a smoked mozzarella. We both agreed the texture was dry and harder. Neil said he wanted to try it on a pizza and I thought it would be good on a ham and cheese sandwich. It was a pretty good and interesting cheese.

Although this Wine And Cheese were so bold separately, they did seem like they would work great together. As we paired the Monasterio Vino de Uva fortalecido
and Quesos del Norte las cuatro a Ahumado the wine smelled more like candied prunes and tasted more tangy and spicy. The cheese changed also to taste more like meat but not as dry. Neil thought the cheese became more milky and salty as well as noticing the spice and sweetness increasing in the wine. I was glad we had a smoky cheese with such a sweet wine, the combination worked out well! What a fun Costa Rica focused WineAndCheeseFriday!

As I was writing up this entry, I attempted to find out a little more about the Wine And Cheese but this proved to be difficult online. What I do know is where each were made in Costa Rica, the wine was made in Disteleria Centroamericana in Moravia, San Jose and the cheese in San Ramon, Alajuela. Another thing I found out from my searching was that this wine is fortified (fortalecido). Well that explains the sweetness! Surprisingly the alcohol percentage was pretty low, 13%. Guess it’s nothing compared to those California wines we are used to.

Oh and PS, we did use this cheese for Nachos during the week and just a note, it doesn’t really melt but does add an interesting flavor. 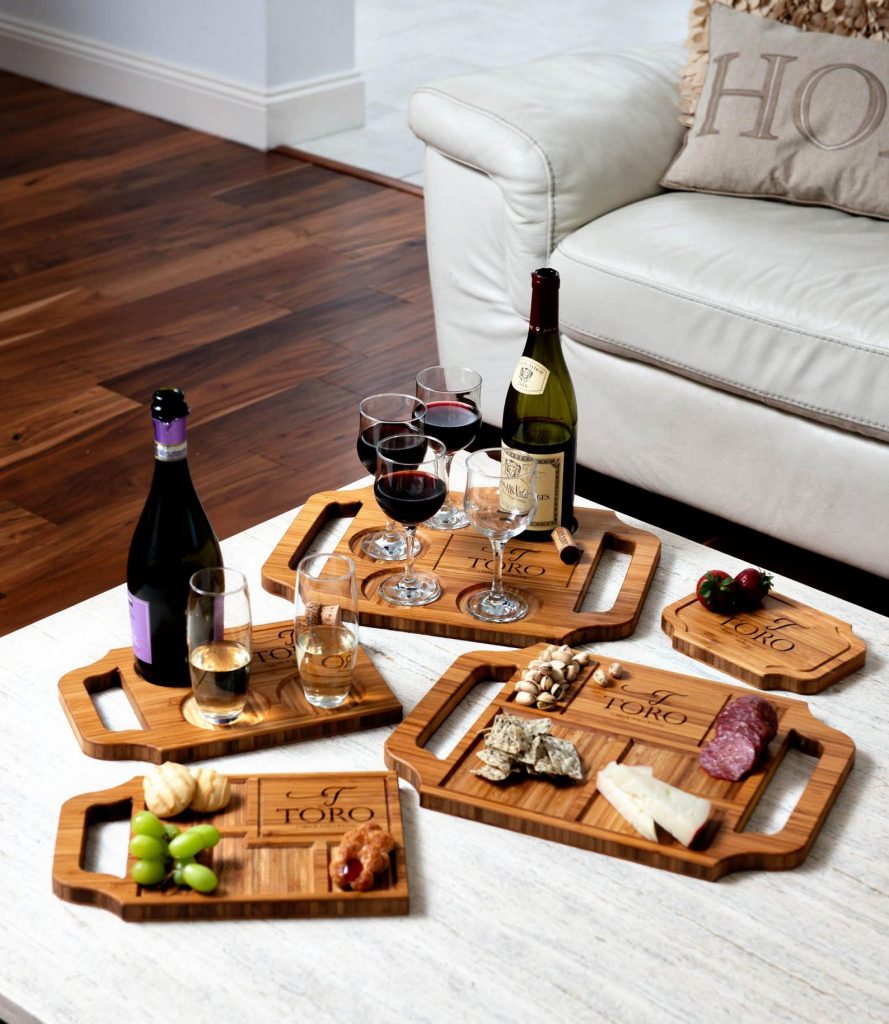 Do you enjoy trying new and unusual wine and cheeses? Here are some great serving trays to use during your next wine and cheese pairing. Click the link to purchase your own set from our partner, Etsy (US).