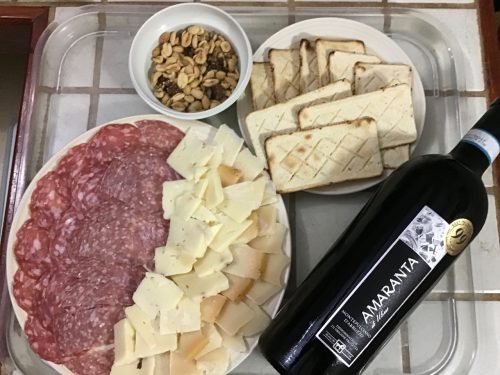 We’ve dubbed February as Italian Wine Month here on WineAndCheeseFriday.com. Why? Why not. I’ve been getting a little bored with my pandemic wine selection here in Costa Rica so I’ve been creating themes to revisit and learn a little more about each topic. Today’s pairing was suggested by WineFolly on a huge list that I found a while back, https://winefolly.com/wine-pairing/12-classic-wine-and-cheese-pairings-you-have-to-try/. I was excited to find both a Montepulciano and a Parmegiano Reggiano to do this entry, so without further ado, here we go!

As far as Italian wines go, I know that I like Barbera, Dolcetto, Lambrusco and Prosecco. I don’t typically like Sangiovese though. Leather, tar and tannins are not on my list of palate pleasers. That being said, I do like some Super Tuscans. I think having the other grapes blended in, help mellow them out for me. Montepulciano is a grape I’ve heard of because my dad said our Italian family is from Abruzzo but I thought it was another wine that was going to be a little too bold for me. Always wanting to try something new, I happily opened the bottle to find out!

Neil said “Wow!” once he starting swirling his wine, there were fruity, jammy aromas jumping from his glass. I agreed that it was quite nice with its berry, cherry cola, a hint of earth and then lots of vanilla. Lately I’ve been pretty excited about vanilla. Maybe the other wines I’ve been drinking have been aged in stainless steel so it’s been a while since I had the oak influence? 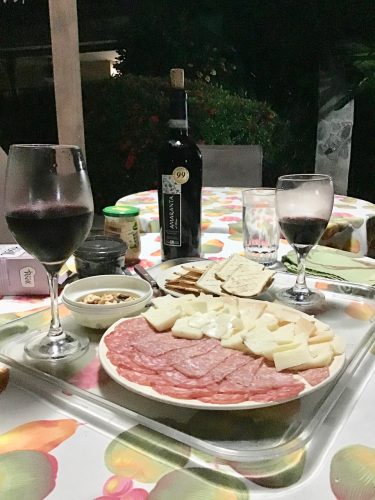 We had chilled the wine in order to make sure it wasn’t way too hot to drink here in our tropical climate. That caused it to become a bit lighter for me and Neil noticed more spice as it started to warm up. I thought the wine was dry and had some spice. Neil found more jamminess that he described as boysenberry sweet jam. We were pleasantly surprised by this wine and delighted that we decided to try something new.

We’ve had parmesan cheese a number of times but would happily take the chance to pair it with this “new to us” wine. This specific wedge of parmesan felt silky smooth when I touched it. This surprised me because this cheese usually feels dry or crumbly. Neil agreed that this one seemed to have a different texture than others that we’ve tried. He described it as more delicate and surprisingly medium soft.

I’d say the aromas and flavors were pretty typical for what we expected. I could smell the “aged” aromas and milk, where Neil smelled the salt and cave funk. The flavors were dry, nutty and a little sharp. Neil called it “very parmesan” which was salty and milky. 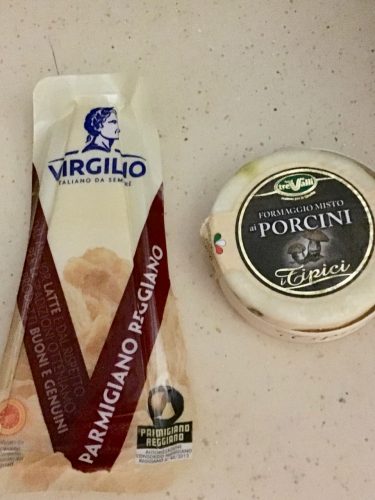 We found a porcini mushroom cheese that seemed like it would be a nice complement to this pairing so we added it in too. It was a softer cheese that reminded me of a muenster or a havarti. It smelled and tasted a little sharp as well as milky. Neil noticed more influence from the mushrooms at the specific part where you could see the bits but could taste it throughout. When I smelled a part with the mushroom it was a little musty and moldy, even a little fishy but neither of us really enjoyed it.

Back to our wine and parmesan, the wine smelled the same but then it had a lot more berry due to the way the milk from the cheese coated my tongue. It was a very nice pairing with the wine changing to be not as dry and now there was a berry finish. The cheese had more milk in the flavor and seemed a little stronger. Neil noticed more alcohol in the wine from the salt in the cheese but also a sweetness like a sherry or a port. He agreed that the milkiness of the cheese increased but it was also more nutty. He liked the pairing too!

Since we had the porcini mushroom cheese there, we decided to pair it with the wine too just to see how either might change. Neil felt like the wine made a big change to licorice. And I thought it became very berry but could notice some licorice too. I guess although we didn’t really like the cheese on it’s own, it helped us enjoy the wine even more.

We did this wine and cheese pairing for dinner so we had a few other things we were eating alongside our wine and cheese. When I had the wine with the salami, it changed to dark fruit, another side to the wine! The parmesan went great with the meats, because the salt decreased the big meat flavor. Then I paired the wine with some peanuts and walnuts and the wine changed to earthy and then cherry.

I think we’re going to look for this type of wine again! Not only did it have nice aromas and flavors on it’s own, it changed quite a bit with all our pairings. Very enjoyable! Thanks to Wine Folly for creating such a comprehensive wine and cheese list. Can’t wait to refer to it again soon! 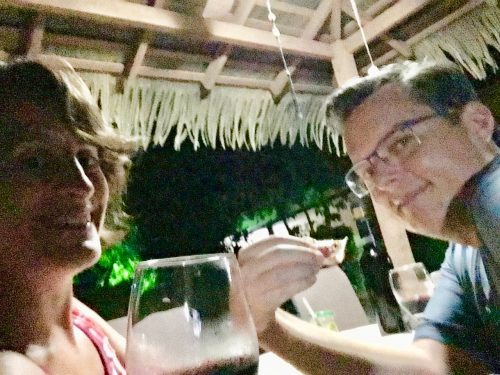