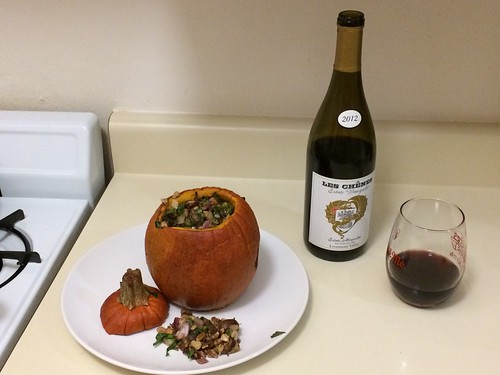 Every year Neil and I stuff a pumpkin instead of a turkey. We found this recipe a few years back when we set out to figure out something for Neil to eat on Thanksgiving with his turkey allergy. This meal has become one of our favorite hearty meals and we usually make it sometime between Thanksgiving and Christmas. The first year we made it we found out the pumpkin size to stuffing amount ratio is harder to estimate than you’d think. This year our experience paid off and we had exactly what we needed to stuff 2 small pie pumpkins. Another thing we figured out was that it’s much easier to eat without the pomegranate seeds. We’ll probably omit these next year too, much easier to chew!

We decided to pair a Mourvèdre with the pumpkin this year. When we purchased this bottle back in June, http://mferraro73.tumblr.com/post/88719120228/trip-to-livermore-part-two-our-next-stop-was, we loved the abundant cinnamon flavors present in the wine. I thought it would go perfectly with our pumpkin so I held onto it for just this purpose. The winemakers also told us that this was their holiday pairing suggestion last year so it made perfect sense to use it. Besides, what kind of cheese would go with a cinnamon wine?

So as we swirled the wine we anxiously sniffed it, searching for those familiar flavors we enjoyed so much. I noticed black pepper and berry aromas with some spice. Neil agreed with the black pepper and was more specific to identify blackberry. Upon tasting the wine I still found black pepper, and a slight black licorice. Neil had the same tasting notes and we both pointed out the dryness in the wine. Hmmm, so no cinnamon. It’s so funny how wine can change even over a few months’ span. This is something I notice regularly at work after pouring the same brands and wines over time.

Despite the lack of cinnamon, we still enjoyed the pairing of Mourvèdre and the stuffed pumpkin. I noticed more fruit and less pepper in the wine, being able to describe the fruit as cherry. The pepper was only in the initial sip of wine, then gone. Neil found the pumpkin produced a sweetness in the wine and thought the wine brought out the individual flavors in the pumpkin.

Although we didn’t experience the cinnamon this time around, it seems that Mourvèdre’s have been showing the black pepper flavors for me lately. Our Thanksgiving flight at work included a couple Mourvèdres and one of them had a definite black pepper or graphite flavor to me. I guess this reminds us to drink wines soon after we purchase them since the flavors are fresh in our mind then and we don’t let the wine have a chance to change.