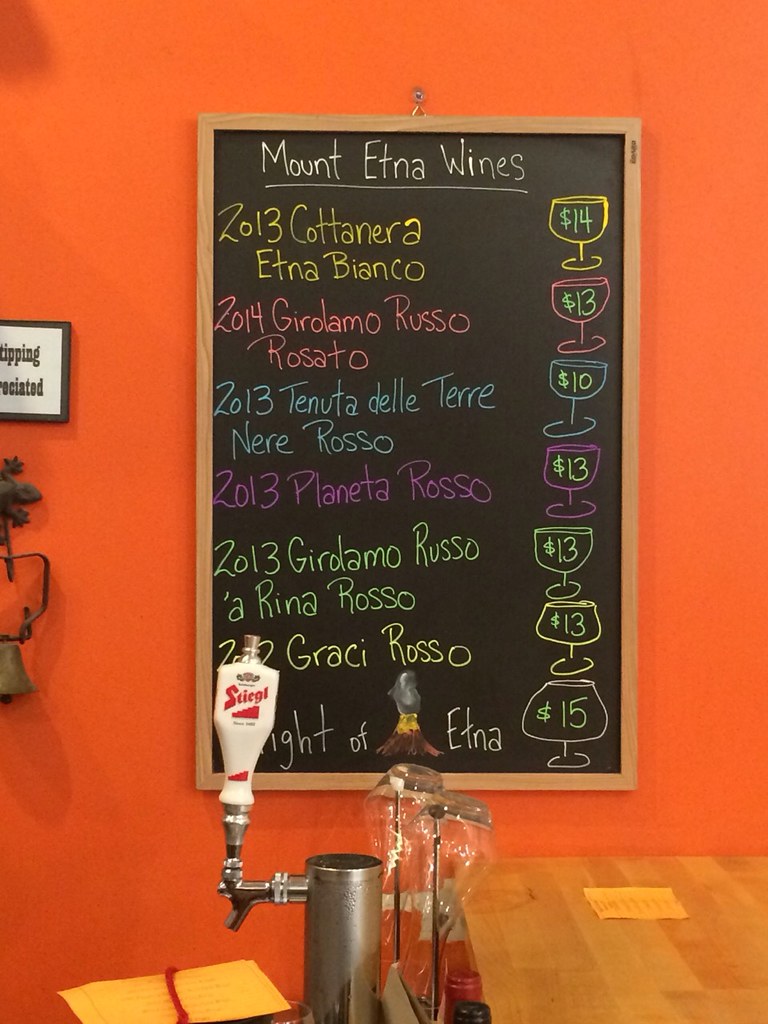 This weeks WineAndCheeseFriday is about the Mt. Etna wine tasting that I attended at William Cross Wine Merchants (http://wmcross.com). As the regular readers of this website know, this is a cute wine shop,  pretty close to my home in San Francisco, where I have attended a few wine tastings. ( http://mferraro73.tumblr.com/post/90139827273/the-strange-this-week-i-attended-a-wine-tasting) ( http://mferraro73.tumblr.com/post/105670703153/holiday-wines-at-william-cross-wine-merchant) It has been a while since my last visit there  so I wanted to catch another one of their Wednesday night tastings.

I chose the Mt. Etna tasting to become more familiar with the Sicilian terroir. As an Italian, I always look for the opportunity to taste new Italian wines, especially since there are so many to keep track of. I even brought a friend along to share the experience with.

As I tasted the Cottanera Etna Bianco, I was really curious to see how this wine would illustrate the terroir of the region. I was a little surprised to notice a light, funky aroma. Not what I would expect for a white wine. There were quite a few flavors to experience; an initial earthiness, then tart and crisp, and maybe orange or peach? Also it seemed to have a chalky finish that really stayed on the tongue.

The second wine, Girolamo Russo Etna Rosato, was a rosé wine that smelled like watermelon. I liked that it had a bit of carbonation but the flavor was a little sour. After tasting the wine, I noticed that same coating on my tongue, which I identified as the characteristic associated with the Sicilian terroir.

The remaining wines were red wines from the same region, note the “Etna Rosso” in each of their names.  Also Steve, the owner of the shop, let us know that the next three wines were made from the grape Nerello Muscalese. I have heard of this grape but since I’m still learning about Italian grapes, I wouldn’t have picked it out.

The 2013 Tenuta delle Terre Nere Etna Rosso had a soft and fruity aroma that reminded me of a sweet berry. Initially it was a dry and tart wine but then flavors of blackberry appeared with a strawberry finish. This wine followed suit with the same terroir feeling on my tongue. And although I wasn’t sure if I liked this wine at the start, it did grow on me and became my favorite wine of the evening.

It’s great attending wine tastings at William Cross Wine Merchants because they decode the name of the wines for you, for example in the Planeta Etna Rosso, Planeta is the producer. I picked up aromas of earth and licorice but not many flavors, just spice and some dryness. There was also that feeling of your tongue being coated.

The next wine, Girolamo Russo Etna Rosso, had a bit of an astringent aroma that I could feel in my nose. This wine awakened many senses because I could feel the wine on my teeth and tongue too. It was a dry spicy wine with cherry flavors.

We finished out the tasting with the Graci Etna Rosso.  This wine seemed a little lighter and had cherry aromas. It was another dry wine with spice but I did enjoy the flavor and licorice finish.

It was a great evening learning about these Sicilian wines and another new region. Although I wasn’t really a fan of the coating these wines left on my tongue, I had a great time discussing these new wines with my new friend. Leslie and I got so into the tasting, really analyzing each wine and seeing what each other thought about them. We can’t wait to go wine tasting together again!