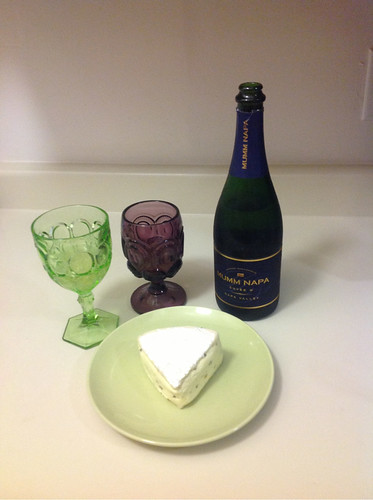 We’ve only done one other sparkling wine during Wine And Cheese Friday so we figured we’d try another this week. This sparkling wine was prepared by the Methode Traditionnelle, in Napa Valley. Lets see how we like it.

Neil identified apple and pear aromas, while I picked up tart citrus notes. During the first sips Neil found those same apple and pear flavors with oak in the finish. I noticed the apple and pear but my first sip reminded me of beer. The sparkling wine was light-bodied and tart.

We have tried a few triple cream cheeses so far but I’m curious to see how different this one is since it has mushrooms. This cheese was soft, but not too soft, and creamy. I liked the mushrooms and we agreed that they added an earthiness to the cheese. Neil said it had a woodsy flavor with a little funk. I thought it was a little tangy but we both thought it was super tasty.

When we paired the Sparkling wine and Triple Cream, I noticed more funk in the cheese, stronger mushroom flavor and the creaminess increased. The sparkling wine seemed to get lighter when paired with the cheese but I also picked up more yeast in the wine. Neil found a zing of mushroom, and less bite on the wine, but the cheese stayed the same. This pairing was okay but I’d say we both look forward to having the cheese again.