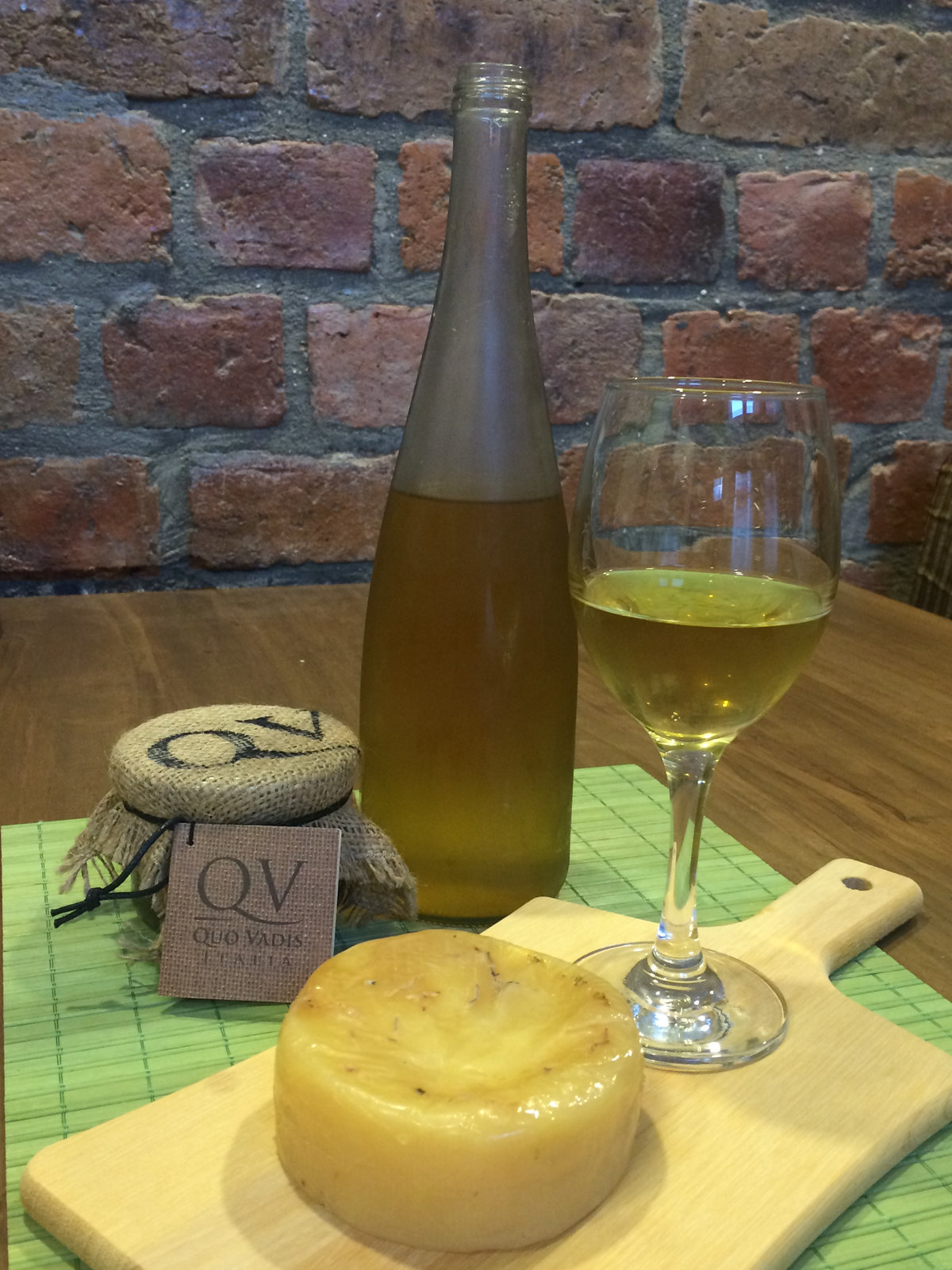 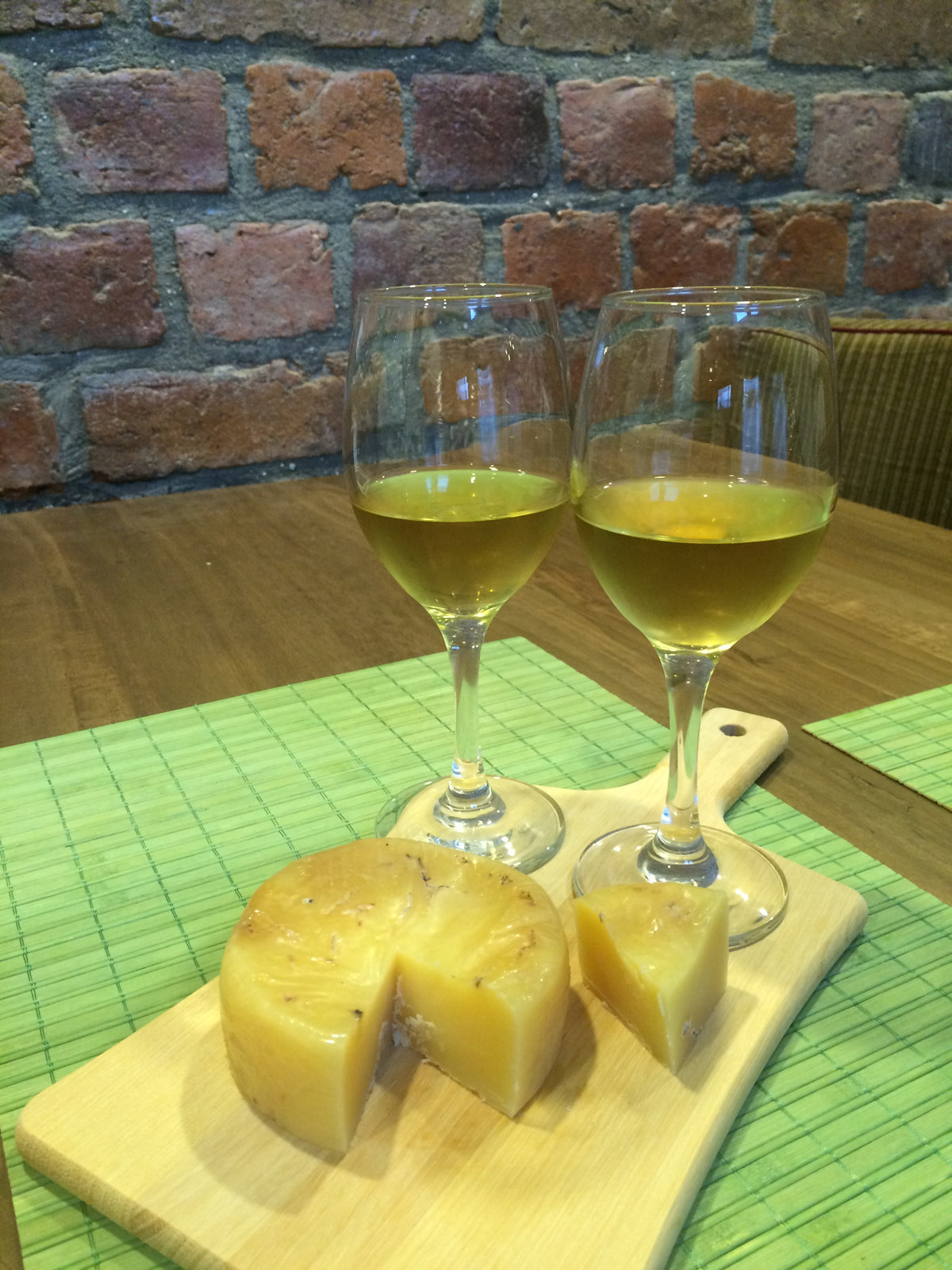 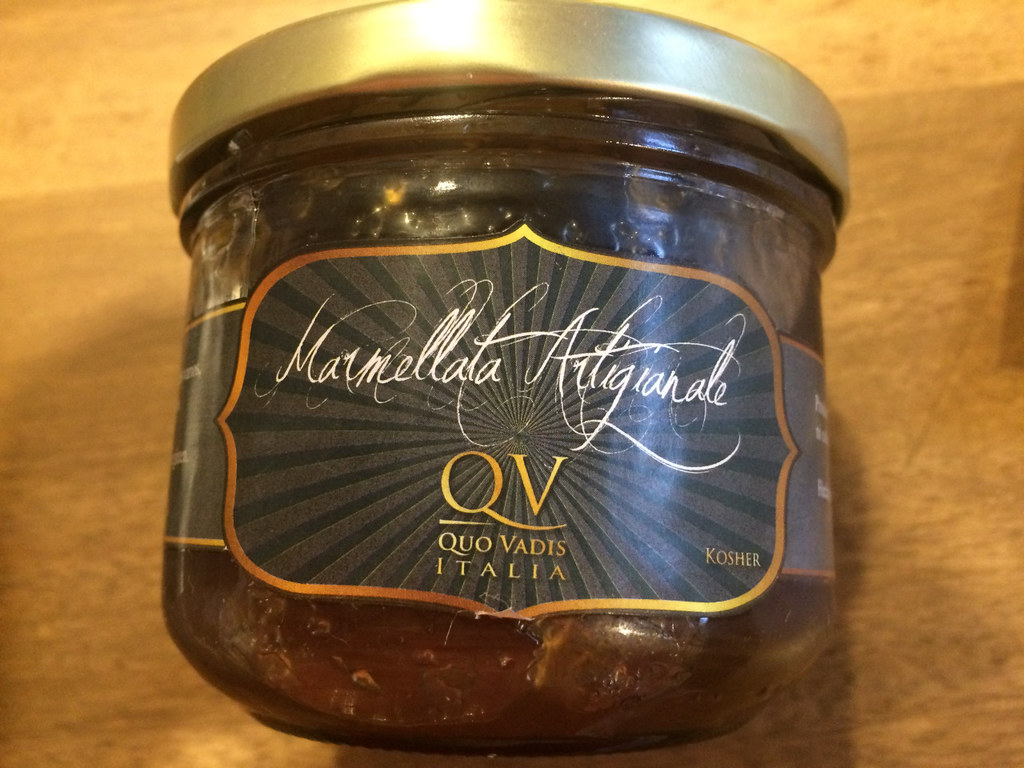 This week’s WineAndCheeseFriday is Spanish with an Italian twist. When we were walking home from dinner last week we saw a small Italian shop with homemade cheese, Quo Vadis. We figured we should stop in this week to pick up some of their Queso Maduro to try with wine. After we paid for the cheese, we were talking with the owners and found out that they also make various fruit wines, limoncello, marmalades, chocolate, and smoked ham. It all looked so wonderful and we even had a chance to do some sampling. We figured we should go for the total package so we purchased an orange wine and marmellata de cebollas (onion jelly!) to have with our cheese.

We have prepared tasting notes for wine, cheese, and all the combinations, we hope you enjoy it!

During our sampling in the store, we had a chance to try the frutilla (strawberry), piña (pineapple) and naranjo (orange) wines. They were all very flavorful and reminded us of being back in Florida and trying all those fruit wines. I thought the orange would be the most out of the ordinary so we chose that one for our pairing. While we were swirling the wines, Neil and I were both concentrating pretty hard to figure out the aromas. I had a hard time identifying the exact aroma but noticed that it was light, soft, orange but not sour, tropical, tart and sweet, with a possible hint of lime and it reminded me of some kind of orange candy. I wondered if it might be making me think of the vitamin supplement EmergenC? Neil figured it out, he said it smelled like Sunny Delight! Yes, I’d say that’s what I was trying to come up with.

Once we tasted the wine I noticed citrus flavors, not just orange, and it kind of tasted like dessert but not super sweet. There was a tart, dry finish that lingered nicely. Unfortunately I kept being reminded of some type of artificial “orange flavoring” from a chewable vitamin C. Neil had a better experience, he said it tasted like biting into a fresh orange and seemed more like an orange liqueur with a thick texture. Our friend Teresa had a sip too and she thought it was pretty good. Her husband Chris didn’t think it seemed like wine, maybe more like juice?

Before we were even onto the cheese portion, I kept getting wafts of the aroma. It reminded me of wax crayons. I had cut a small wedge out before we took our pictures and I think I had some of the residue on my fingers so it was more noticeable. When I actually smelled the cheese it was definitely salty funk. I noticed dry, very funky barnyard flavors once I tasted it. It even made my tongue tingle a little bit. Since it was so funky, I wondered if it was a cow cheese or if it might be sheep’s milk. It was definitely one of the funkiest cheeses that we’ve had in a while but we both really enjoy a funky cheese! This cheese had a very hard texture that almost made it hard to cut but that’s due to it being aged. We also thought it was waxy, a little crunchy, smooth and melted in our mouths. Neil noticed some pretty dominant aromas too, he said there were salt, milk and a huge grass aroma. The flavors he identified were grass, a hint of salt, hay and maybe some herbs. Teresa enjoyed the flavor of the cheese, too.

The first pairing was with the naranja wine and queso maduro. Neil and I were both surprised that the flavor of the wine really wasn’t affected by pairing it with cheese. We did notice the funk of the cheese to settle down and a cream flavor appeared. The cheese also seemed to taste a little more waxy.

We paired the queso maduro with the marmellata de cebolla next. We could definitely smell onion but there were some nice spices too. There is a spice in Latin America called sazon completa, that is a spice packet with a mix of 10 spices and the aroma reminded me of that. Neil noticed the onion but there were greens or herbs as dominant aromas too. I didn’t really notice any flavors coming from the cheese but the combined flavor reminded me of an herbal cracker. Neil was taken back to his childhood when he used to eat blueberries and milk, and this tasted like a more savory version of it. There was a creamy base from the cheese and it was “strange and yummy”. Teresa was surprised how good it tasted. Chris wasn’t really a fan, but he doesn’t care for onions anyway.

Our final pairing was the naranjo wine, queso maduro and marmellata de cebolla. I found the sweetness of the wine to decrease and become more tart. The marmellata tasted more like onions and a little less savory. There still wasn’t much cheese flavor but some milkiness, dryness and cheese texture. Neil noticed an intense lime flavor in the wine that reminded him of a mojito and the sweetness of the orange appeared. He agreed that the fruit flavors of the marmellata were much more dominant from the pairing. When Teresa tried the pairing, she found the alcohol flavor to appear but that seems to be common in some pairings that we’ve tried in the past.

Neil really liked the whole experience. He thought it was such a decadent aperitif and a great substitute for eating crackers with cheese! I liked the queso maduro and marmellata de cebolla the best. The wine was nice initially but once I started thinking about the artificial orange flavoring, I couldn’t move past it. Teresa said she was really surprised about the wine since she usually doesn’t like to drink wine. Who knew that we would find a little Italian gourmet food shop in Ecuador? What a cool chance to try a blend of the two cultures!