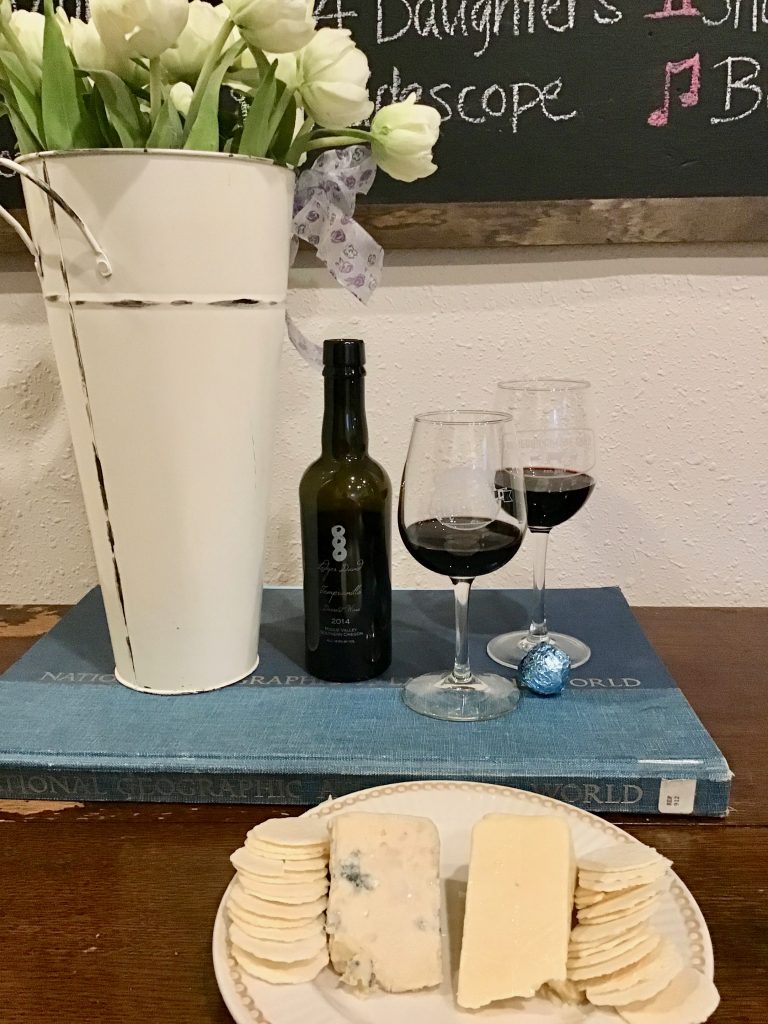 We headed to Central Point, OR on a hunt for cheese back in October. We knew we’d be going to Rogue Creamery as that was the main point of our visit. They are located in the Artisan Corridor that also included Ledger David Cellars and Lillie Belle Farms Handmade Chocolates. Today’s entry will focus on all the treats we purchased from that tasty corridor, the most delicious rest stop in the world! 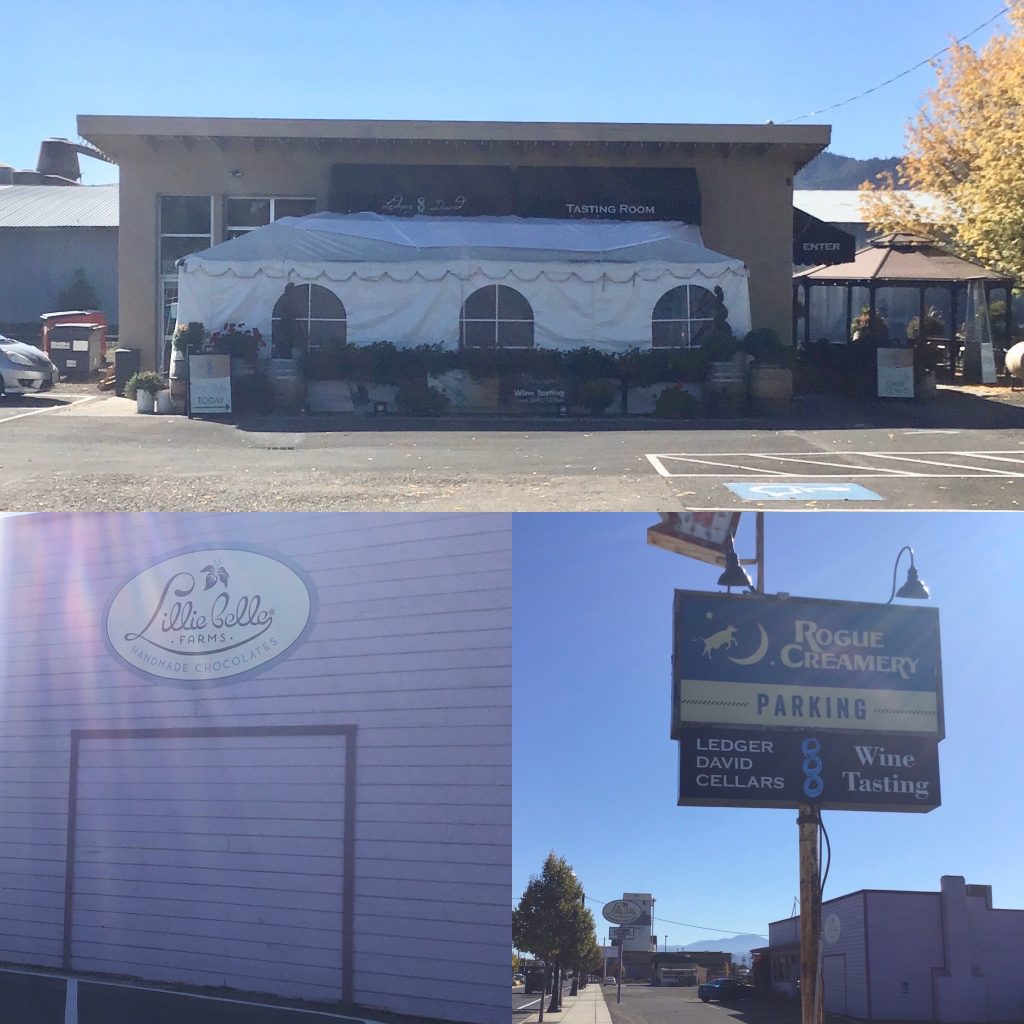 Our time was limited during our stay so we didn’t head into the winery or the chocolate shop, instead we were able to pick up all our goodies in the Rogue Creamery gift shop. What an amazing visit we had that day, but we’ll tell you all about that in our next entry. We even found an AirBnB near the Artisan Corridor so we could get there easily for our early morning tour. 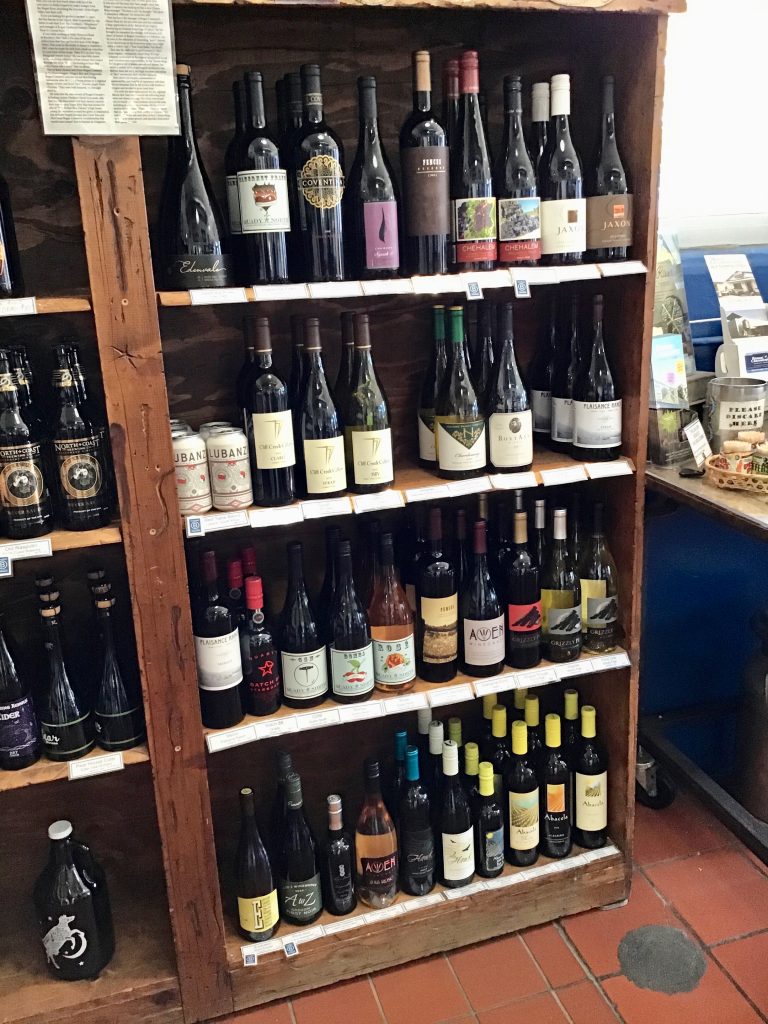 There were all kinds of local wines featured in the shop with different suggestions for cheese pairings. Always being on the quest for something new, I couldn’t pass up a dessert wine made from Tempranillo grapes. I don’t think I’ve ever come across that before. I wondered how Tempranillo, the wine that always reminds me of stones, would be in a sweet wine. And how fun that I’m telling you all about this wine during the week that we’ll be celebrating Tempranillo Day! 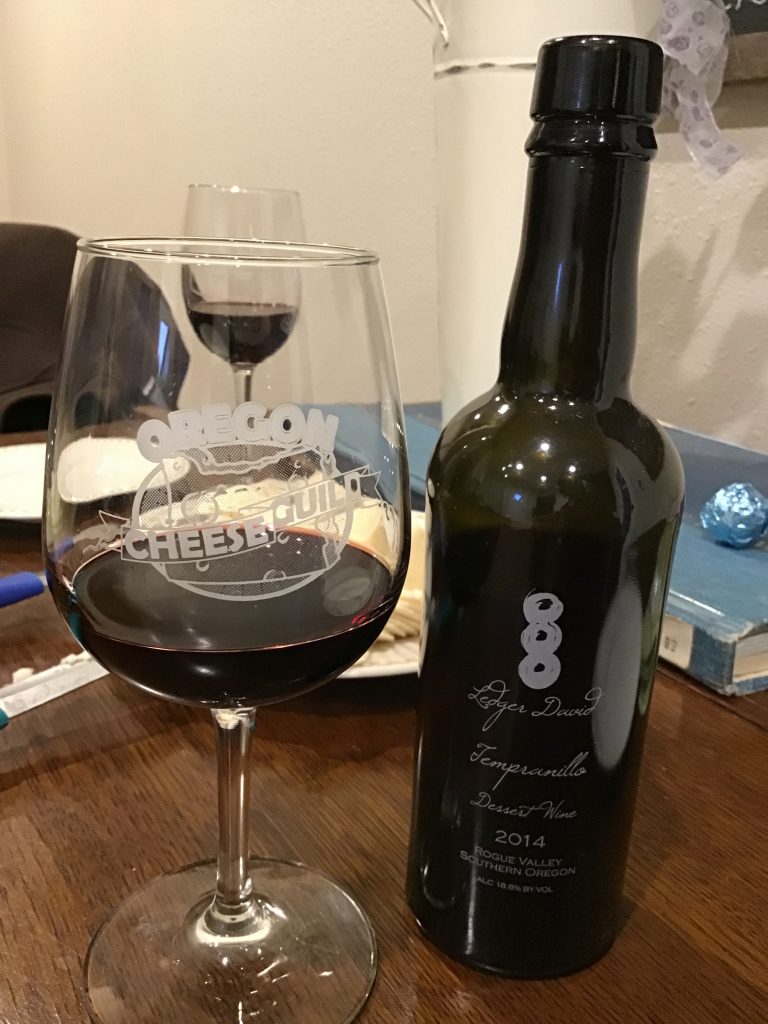 During our cheese tour, we were told that Ledger David Cellars are known for their big, bold wines so I’d guess that’s why they create a Tempranillo based dessert wine. As we swirled our wine in search of aromas I picked up a sweetness with dark fruits like prunes and raisins. Neil was reminded of aromas typical of a Tempranillo (dark, spicy notes) but then he was surprised by pears and apples! The flavor of the wine was sweet but it was also dry and I noticed the flavor of brown sugar. Neil didn’t find much spice in the flavor but he did identify something similar to grape liquor with a hint of orange or citrus.

After the wine had opened up for a little bit we tasted it just to see if it had changed. I thought it had spicy, prune aromas with a smooth, spicy flavor. Neil found it way too easy to drink and said “This wine is dangerous!” Yeah, that can be the issue with those higher alcohol dessert wines, for sure! 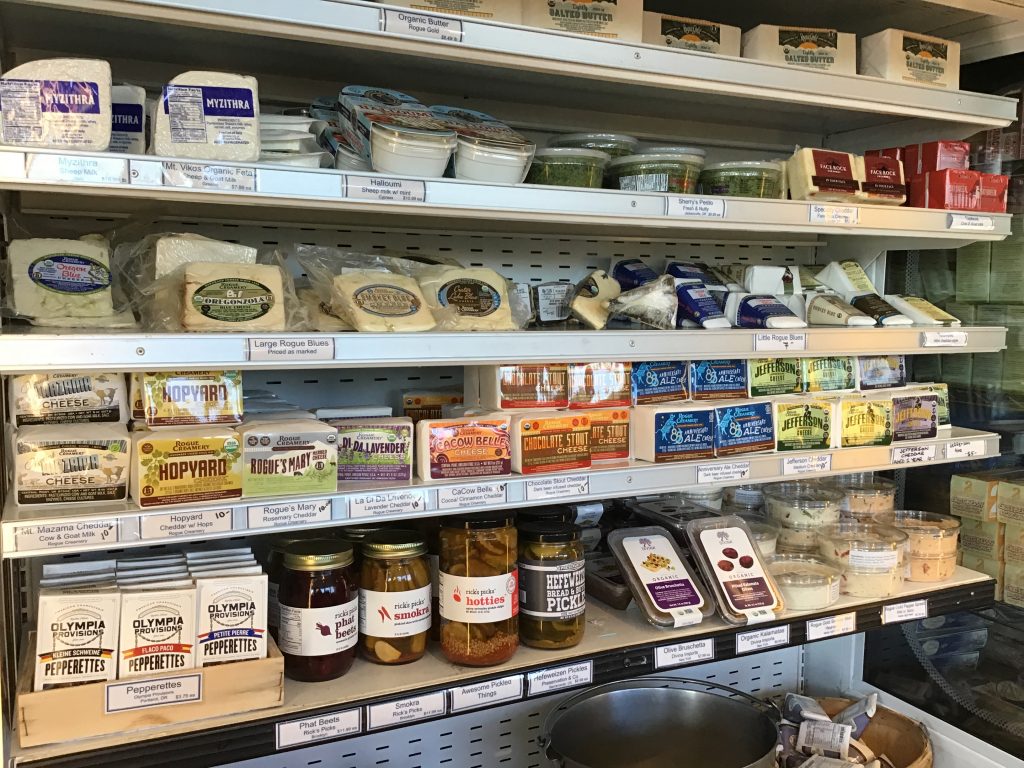 When choosing which cheese to purchase that day, I was a bit overwhelmed! Rogue Creamery is world famous for their blue cheeses but I found out that they started as a cheddar shop. In order to embrace the entire creamery we decided to get one of each. We tied them together by finding a blue and cheddar that both used goat and cow’s milks.

We’ll begin by discussing the cheddar cheese, Mount Mazama. I could smell tart aromas and taste the sharpness in the flavor. I also picked out the tyrosine crystals that occur in aged cheddars. Neil made note of it crumbling apart while he cut it up, a sign of a good cheddar! He said it smelled and tasted both milky and salty and that the flavor was mellow with a bit of tanginess. Overall a pleasant cheese! We already told you that Rogue Creamery started as a cheddar shop but moved into the world of blue cheeses to distinguish themselves. Neil and I both thought this was a good cheddar and think they should push their cheddars a little more now. It could stand up to the other cheddar makers out there! 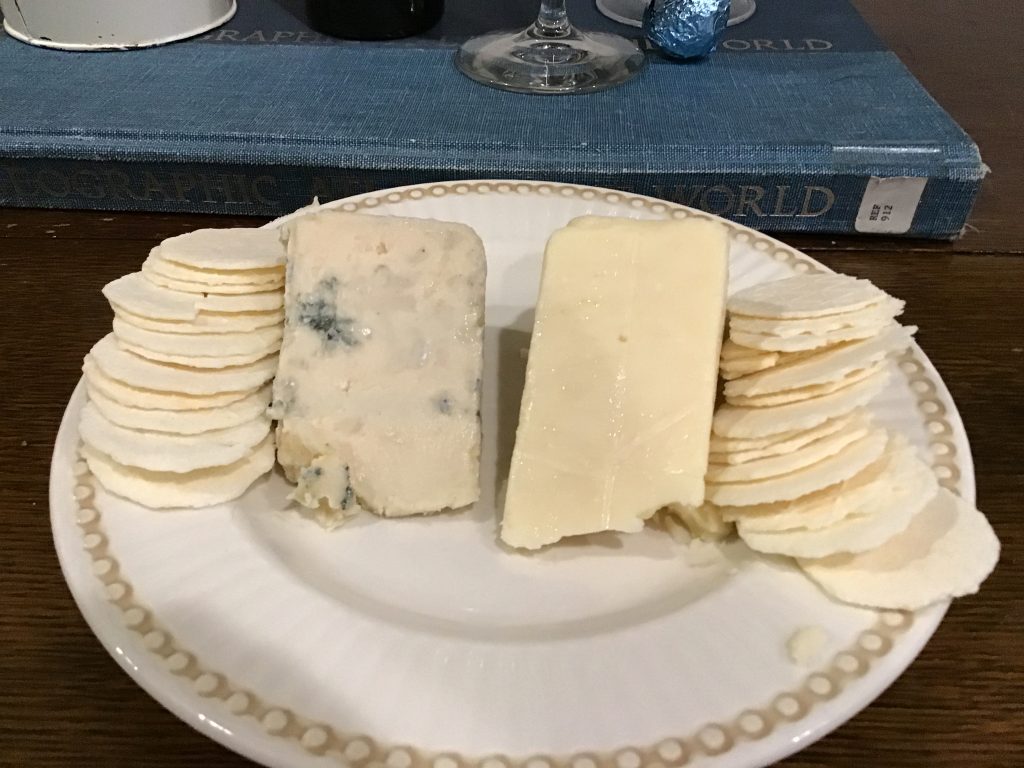 As we opened up the Echo Mountain blue cheese, I could see that it looked nice and moist. I could smell goats funk and some salt while Neil smelled aromas of blue cheese and milk. It was so creamy and I could taste the goats milk too. It kind of reminded me more of a goat cheese than a blue cheese but there were pockets of blue flavor too. Neil noticed the crunchy texture that it had and even saw a few crunch crystals. He described it as both super creamy and crunchy with a salty, rich, blue flavor. What an interesting cheese!

While sipping the Tempranillo dessert wine with the cheddar cheese, the cheese smelled lighter and tasted maybe a little more milky. I could smell the alcohol in the wine but there wasn’t much change to me. Neil agreed about the increase in alcohol and said the cheese stayed the same. I guess there wasn’t much of a reaction from this pairing.

Next up we paired the wine with the blue cheese, which didn’t seem to increase the alcohol in the wine quite as much. The wine was sweet and spicy and somehow the wine seemed more moist and had less goat flavor. Neil thought the cheese was more salty and funky. The wine had more cassis and it developed a spice that seemed like either chicory or baking spice. Neil cast his vote that the Ledger David dessert wine and the Echo Mountain blue cheese was a good pairing. 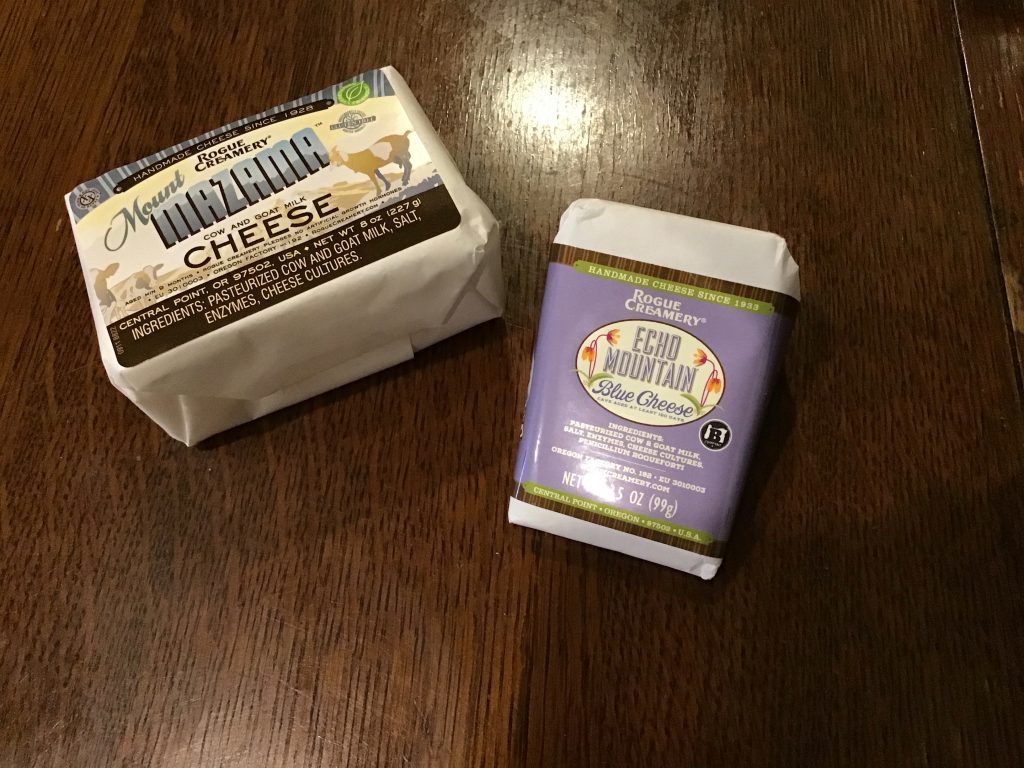 I wasn’t sure if either stood out for me as a good pairing. A few days later, we paired the cheddar cheese with the blue cheese in a grilled cheese. Wow, that was tasty! So my vote goes to the cheese with the cheese! 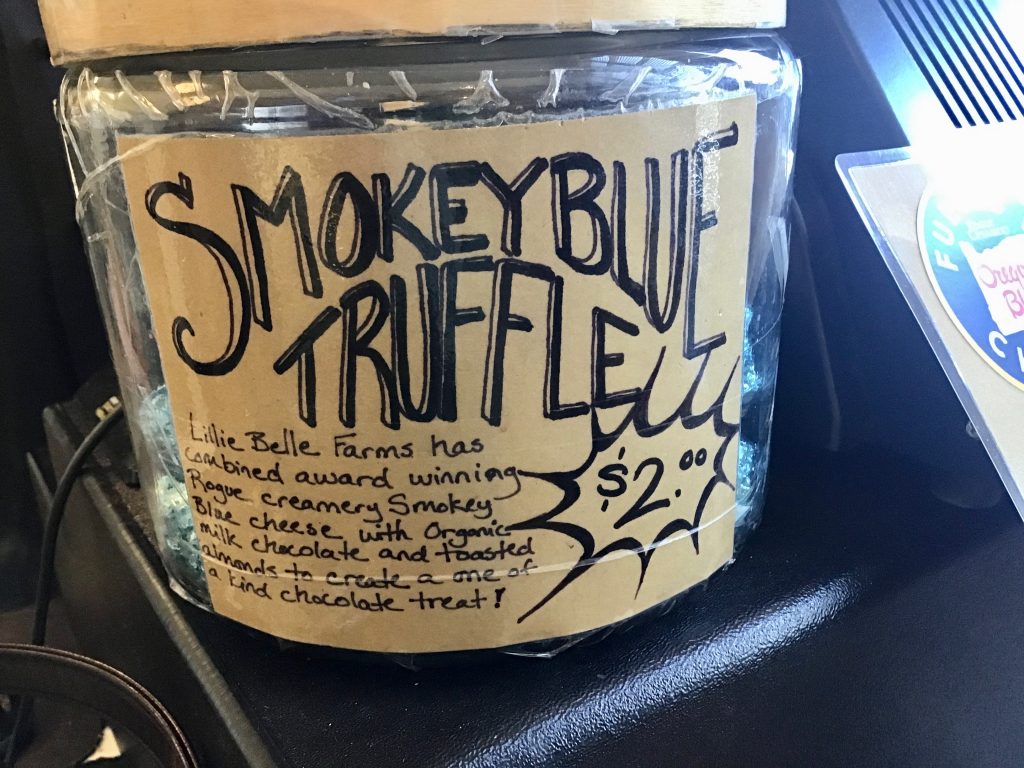 What about that smokey blue truffle? We decided to wait until the following night to open it up. It looked like a coconut munchkin to me with the crumbly coating on the outside. It tasted like bacon to us but didn’t really have any cheese flavor. The wine was drier that night but the chocolate and the wine balanced each other. Neil found that when the truffle and the wine were paired all the fruit in the wine reappeared! I really liked this pairing, it was my favorite wine pairing of the bunch.

During our trip planning out to Oregon we weren’t really sure how much opportunity there would be to try any Oregon wine. I’m glad we found the Artisan Corridor in Central Point to squeeze in some time for wine too. And how about that, we had a tempranillo dessert wine. What a cool find and let’s not forget that tasty chocolate truffle!