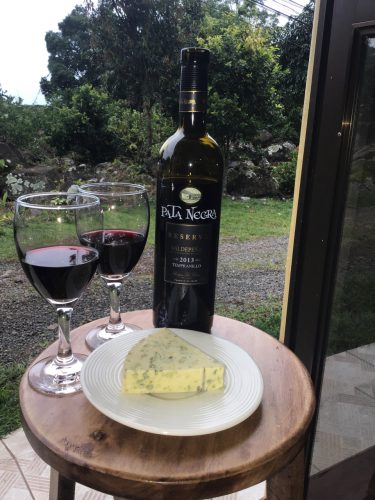 After trying a few bottles of Pata Negra Tempranillo, we decided to have one for an official wine and cheese pairing. We’ve tried multiple vintages and styles so we wanted to share it with all of you! The cheese we chose was from Denmark, and we pretty much jump at the chance to have blue cheese, when we can find it. We actually figured out during the pairing that the last time we’d had blue cheese was with our family during the holidays. No wonder we were craving it so much. We present to you the pairing of Pata Negra Reserva Tempranillo and Rosenburg blue cheese.

If you watched our most recent FB Live Presentation, then you heard about this Spanish wine brand then. We were tasting a white wine that night but we mentioned that this brand has been all over San Isidro lately. Like we said, it was time for us to share some tasting notes with you.

As I swirled the wine I picked up dark fruit, specifically prunes, that gave it a hint of sweetness, black pepper and some earth aromas while Neil noticed cherry cola and slate. The wine had flavors of black pepper, dark fruit; it was dry, with acid in the finish and some black pepper spice too. Neil described the wine as having “big cherry fruit”, agreed it was dry, and he found a hint of spice and slate. The wine was fruit forward but not thick or overly sweet. After tasting the wine, I was excited to taste the pairing because of the sweetness in the wine.

The cheese had that token blue funk that neither of us could miss! I also found salt, a hint of sweetness, and aromas that tingled my nose. Neil thought the milk aroma seemed more like goat milk than cow milk. We both exclaimed how creamy it was and Neil added “really smooth” too. I even picked up a hint of crunchiness. What a combination of textures! The flavors tingled my mouth and carried into my chest and throat. My mouth even puckered up a bit. Neil didn’t think it was quite as tart as other blue cheeses he’s had so I guess we disagreed there. He did call it a good blue with salt, butter and a surprising sweetness to it. I had the strange urge to spread the cheese on some toast, so I did that a couple days later with some honey, too. Yum!!

During the pairing, the prune in the wine aromas seemed to escalate and the flavor changed to be spicy with black pepper, a sweet finish and it was no longer dry. The cheese smelled like salt but the funk went away. It seemed to lose the funk in the flavor too but still had the milkiness. Both the wine and cheese changed so that’s a thumbs up from me. Neil was excited to see that the wine was much less dry during the pairing. He also noticed more fruit, including prune and more spice. Somehow the cheese got even creamier for him, the blue flavors leveled out and there was a salty yumminess. The first sip of the wine after the cheese did have a strong tangy milk taste but he described the overall experience as a Triple Crown!! We could have eaten that entire wedge of cheese with the wine but we saved some for the next day.

I’d guess we’ll be getting both the wine and cheese again for a repeat!

Ever have the problem where you can’t take a selfie without one of you looking incredibly goofy? Well, that happened during this pairing, sorry, none of them made the cut 🙂