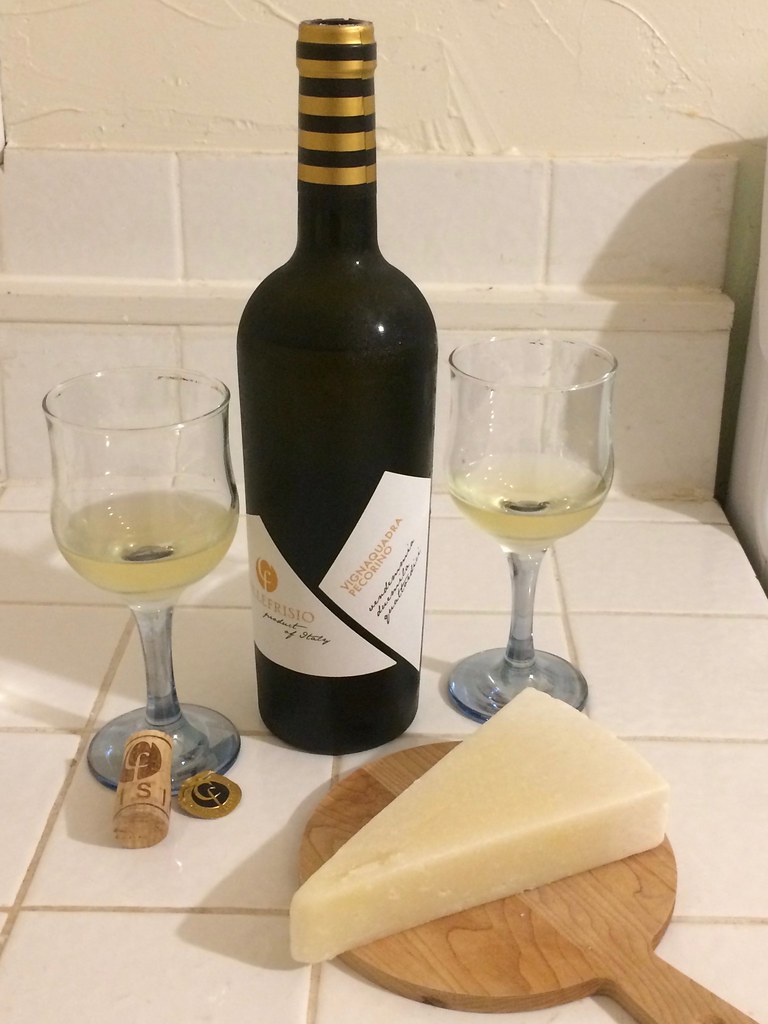 We promised more wines from West Palm Wines and here you go! During our trip there, we saw this Pecorino wine and knowing there is a Pecorino cheese, I had to get it for a WineAndCheeseFriday Pairing. The cheese is Pecorino Romano and you’ve probably already guessed that we found it at Trader Joe’s. We did try out another store first but they didn’t carry it. We should have just gone to our old standby to start. I was so curious to see what the link between the wine and cheese would be for them both to be named Pecorino. I thought it might have been where they are from in Italy.

Since I’d never heard of Pecorino wine, I hit the internet to find out a little background information. This wine, produced by Collefrisio, is grown in the IGT (Indicazione Geografica Tipica) region of Terre di Chieti, a part of Abruzzo, Italy. This is one of the white grapes commonly grown in this region, although you are probably more familiar with it’s red grape, Montepulciano.

As we swirled the Pecorino wine, the aromas were jumping out of the glass! I noticed crisp aromas, citrus/lime, minerals, grass and it reminded me of Sauvignon Blanc. Neil thought the wine had a high acidic aroma and he also picked up the aroma of dandelions. The legs on the wine were pretty obvious, too! Once we tasted the wine Neil said the wine was acidic, buttery but softer like cream, and he picked up those dandelions again. I thought the wine was tart and it tingled my tongue a bit. The wine was crisp with a higher acid level but had some softness, too. Neil really enjoyed how complex the wine was. I pointed out that we’ve found quite a few wines from Europe that are magically both crisp and soft.

The Pecorino cheese was just as aromatic as the Pecorino wine! I noticed aromas of barnyard funk, salt and milk while Neil found it to be pungent and sharp with notes of acid, herbs similar to Italian seasoning and grass. Next we determined the texture of the cheese: dry, chalky, powdery, crunchy and hard. Then onto the flavors which Neil described as very sharp and acidic! He noticed more italian seasoning herbs and flavors of milk and salt. I found it to be very salty, to the extent of tasting like sea water! There was also that element of butter and milk that Neil mentioned with the wine. We both knew this was a big cheese with a huge flavor that lingered. Funny thing is that we both wanted to pair it with eggs, either on an egg sandwich or in scrambled eggs. *

When we paired our Pecorino and Pecorino, I found the aroma of acid to be much more mild but the flavor to be higher in acid and there was a crisp apple finish. As I tasted the pairing again, it seemed like the wine and cheese mildly influenced each other but then the original flavors returned. There wasn’t much of an affect. The wine didn’t seem like Sauvignon Blanc anymore; there was more of a mineral flavor that reminded me of an Italian wine. Neil thought the flavor of the wine changed to lemon butter and the acidity decreased. The flavor of salt in the cheese decreased but then came back in the finish. We both prefer the wine and cheese separately. Neil wondered if the cheese would be better in a meal as an accent.

But why are they both called Pecorino? Well did you know that Pecorino cheese is made from sheep’s milk? Pecora is the Italian word for sheep, so the cheese is an easy connection. Why does the wine get to be called sheep? The story goes that the sheep would nibble on the grapes as a snack, so there you go, Pecorino and Pecorino.

*Note: I did try the cheese in scrambled eggs but it doesn’t melt so it just kind of turned into obvious chunks of cheese in my eggs. ?