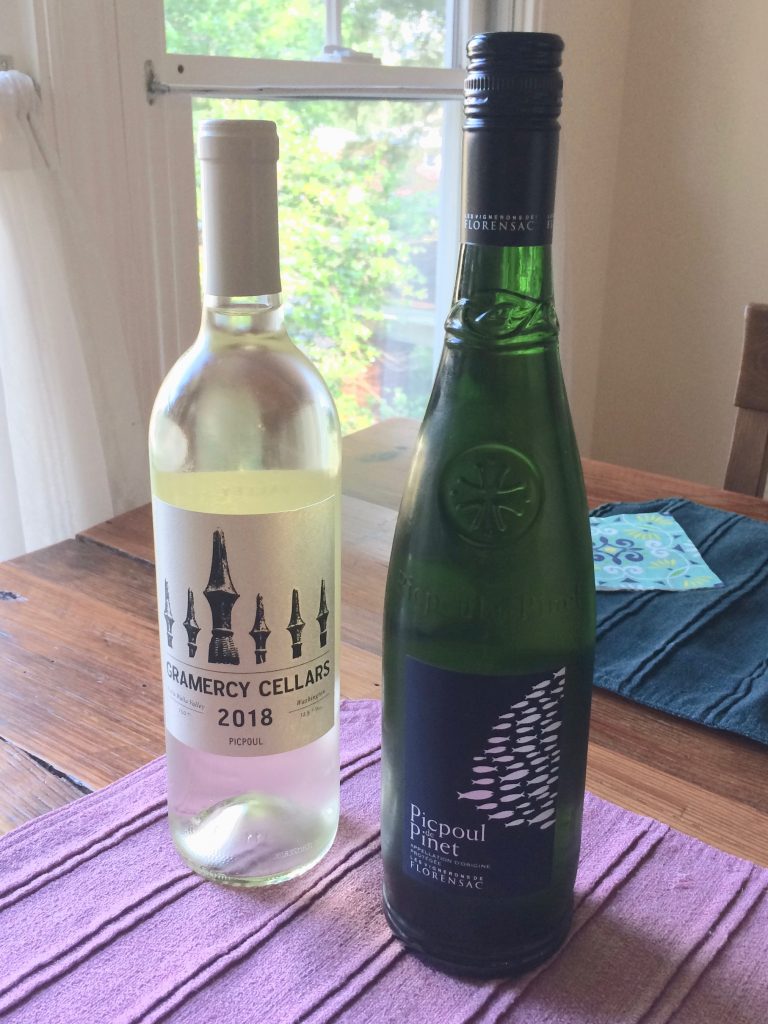 We’re always curious to try out some wines we’re not very familiar with. During our visit to the Wine Feed, we came across bottles of Picpoul from two different countries. How fun, we could learn about a new grape and see how it differs around the world! We’ve only tried this type of wine once before, https://wineandcheesefriday.com/tablas-creek-vineyard-paso-robles-ca/, and it was something I remembered wanting to try again. How often do you deviate from the noble grape varieties? Maybe this is a type of white wine you’d like to try?

During our time in Durham, we get to spend time with Neil’s cousin Phil and his wife Christine, fellow winelovers. Since Christine is vegan (with wine as an exception), I can’t share my cheeses with her. What a great alternative to still share some wine time together. Also, Phil prefers white wines over reds so there’s another great reason to try Picpoul.

When we tried the wine in Paso Robles, we were with Lori from Dracaena wines. What a cool coincidence that she had just finished creating her podcast for Winephabet Street about this varietal. I knew it would be a great reference for today’s entry! We even happened to be tasting at Tablas Creek, the winery that brought the grape over from the Languedoc region of France. Not only did they introduce this “lip stinger” grape to the US, they are also home to the largest planting of the grape in the country. 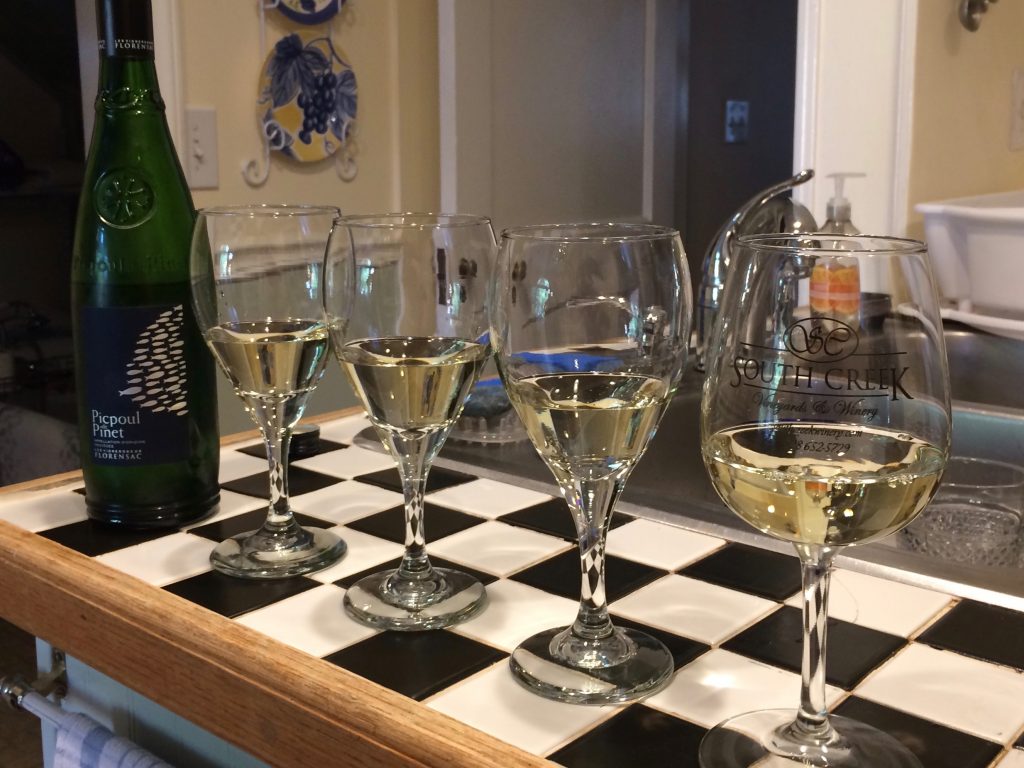 Our tasting with Phil and Christine began with the French Picpoul de Pinet. We noticed the color of the wine to be very yellow. Christine was ready to identify tasting notes for the wine. She happily pointed out apple, pear and herb aromas. She even described the fuller body and soft mouth feel of the wine. Phil sipped his wine and said it smelled like grapes. Neil picked up musty aromas and I agreed. Even Hunter, their son, sniffed the wine and described it as a “Bath and Body Works fruity soap.” It seemed a little funky to me and there were mineral aromas too.

We all agreed without a doubt that this was a tart wine! I learned from the podcast that the name of the grape translates to “lip stinger” due to its high acidity. For this reason, you can’t usually find it as a single variety wine. This didn’t keep our group from enjoying it though. Neil could also pick out mineral flavors and a soft, round texture. I made note of the high acidity but also the softness and lemon flavors. Christine said this was her favorite of the two. The podcast also told me the “Pinet” is part of Languedoc, France where you will find the largest production of white wine in the region. And if you look really hard, you can find a Picpoul Noir there, too. 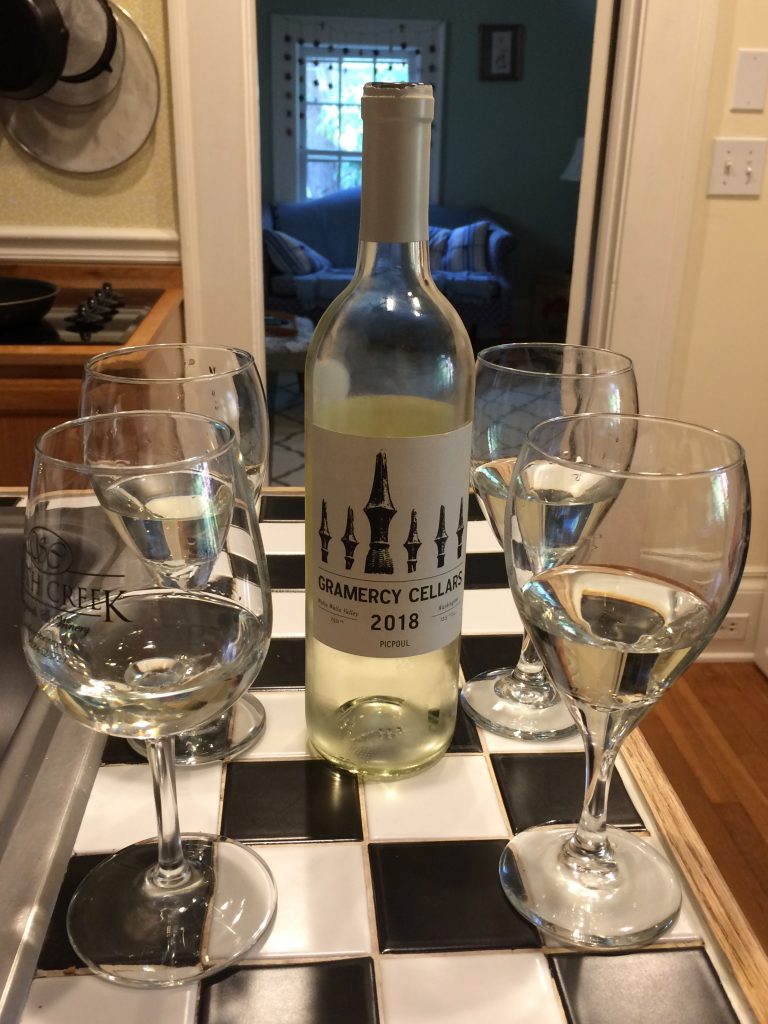 So how did we like the second Picpoul, by Gramercy Cellars in Washington? This wine seemed to be much lighter in color than the French version. Although Neil and I described the first one as musty, Phil thought this one smelled like beer. Neil even said it might smell a little skunky. I disagreed with them and identified light buttery aromas and even a hint of apple. Christine thought back to her first wine and said this one isn’t apple or pear, it’s more like lemony aromas. Then when Neil tasted his wine, he noticed honeydew flavors. Phil and I both described it as a light wine and I enjoyed how easy it was to drink. This was his favorite of the two. Christine knocked it out of the park with her flavor profile too, identifying apricot flavors. It just seemed like the flavor of an apple to me, but as I sipped it more throughout the night, it did become tart.

Neil didn’t have a favorite wine for the evening but I really liked the Gramercy Cellars version. There was a little left at the end of the night so I was able to taste it another night too. I actually liked it a lot more than some of the other wines we’ve tried recently. What a great opportunity to try a new wine and find something I really liked! I thought it was pretty cool that this specific bottle of Picpoul was also mentioned on the podcast.

Would you be curious to know what type of meal to pair with this tart wine? Lori and Debbie did a bit of research on Winephabet Street and found a few ideas. It seems the consensus would be rich seafood dishes with salmon, swordfish, sea scallops or clams. If fish isn’t your thing though, they also suggested Fettuccini Alfredo. All of these things would be able to stand up to that lip stinger, Picpoul! I guess I’ll have to get another bottle of the Gramercy Cellars and make some seafood, yum!