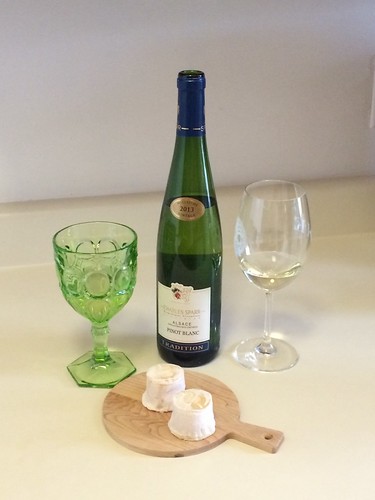 We tried this wine when we attended the French Wine Tasting at BevMo (http://mferraro73.tumblr.com/post/114788359563/french-wine-tasting-at-bevmo-in-order-to) and knew that we both wanted to try it again with cheese. Although we knew we liked it, we weren’t quite sure what type of cheese to pair with it. Then I was at Real Food Company, http://www.realfoodco.com, looking at their cheeses and was intrigued by this cheese. It sounded like something we’ve come across before and was shaped a little differently than most cheeses we’ve tasted. (http://www.vermontcreamery.com/bijou-1) In the sense of adventure, I grabbed the cheese with intent to pair it with our Pinot Blanc.

During our initial swirling of the wine, I was really interested in what causes a Pinot Blanc grape. We all know Pinot Noir and hear about Pinot Grigio but what is a Pinot Blanc? I did a quick search and found out it is a genetic mutation of Pinot Noir that has a different grape skin color than Pinot Grigio. (http://www.theglobeandmail.com/life/food-and-wine/wine/whats-the-difference-between-pinot-grigio-pinot-gris-and-pinot-blanc/article22313091/) Always fun to increase our wine knowledge!

When it came to identifying aromas in the wine, Neil and I agreed that it had a crisp aroma but I noticed lemon and minerals while he thought it was green apple with a hint of lemon drop. The color was a lighter yellow so I figured there was no oak used in the wine making process. I found the crispness to carry into the flavor, even to the point of tart and tangy lemon but it didn’t taste as astringent as it smelled. There was an initial softness for me but then my taste buds found the tartness. Neil continued to notice the green apple which transformed into buttered caramel and apple cider with a long finish. He really liked it and said it’s one of the best white wines he’s had in a while. We also agreed that it would pair nicely with a soft buttery fish, one of the things commonly found on our dinner menu.

The cheese was definitely letting me know of it’s presence during the wine tasting. I kept getting wafts of the smell of salt and goats. As I started the cheese tasting, I held it closer to my nose to see what other aromas I might notice. At that point, I found an intensity that almost stung my nose, definite barnyard! Neil was a little more polite when describing the cheese but was still at a farm, he smelled fresh hay. The texture of the cheese was thicker than I expected and Neil called it creamy and crumbly. I picked up a salty flavor, a hint of tanginess, and a long lasting milky finish. Neil found it to have a nice amount of funk, with a milky, full flavor and possibly a brine rinse. Although this was a bold cheese the taste was not nearly as funky as the smell. I liked that it was more intense than the fresh goat cheeses usually are. On a funny note, I looked up why the cheese was called “crottin” and it refers to the shape of the cheese. Strangely enough, due to the fact that it looks like animal droppings.

As we paired the Pinot Blanc and Bijou, Neil identified the cheese’s creamy milk flavor and texture to come out more. He also found the flavor of the wine to become more mineral and the tartness was like a slap in the face. I said the wine had a much sweeter aroma and then something that reminded me of beer appeared, maybe a wheat flavor? There was also more of a noticeable wine finish, probably due to the long cheese finish. Then the cheese seemed a little cleaner with less funk, more milk, and a milder flavor with barnyard funk hiding inside. There was a definite change and noticeable reaction during the pairing but Neil and I both prefer the wine and cheese by itself, not paired. What a fun WineAndCheeseFriday with both wine and cheese having such an intense aroma!